While Valve work away on their own standalone version of Dota Auto Chess, they're helping the original Dota 2 mod by making it one of the select few selling paid premium features in the game's store. Launched over the weekend, the Auto Chess Pass gives a month of fancy cosmetic bits and bonus rewards for less than a quid. It's mostly just fancybits, with the mod still free for everyone to play in full. This is pretty rare for Valve to do, especially given their caution following the Steam paid mods fiasco.

The Auto Chess Pass costs £0.75/$0.99 on Valve's Dota 2 Store. That gets you a wee Baby Roshan courier then 30 days of premium status. This includes gaudy golden effects for player portraits and chat and things, receiving bonus 'Candies' microtransaction cash on wins to buy new courier styles from the in-game store, and a vote on which characters get added next. Curiously, Passholders will also get a vote on which pieces to rebalance. But mostly it's about donkeys.

While Dota 2's cosmetics are chiefly hats for wizards, Auto Chess doesn't let us dress units and changes their outfits when they level up. The only unit we can really customise and control is our courier. Auto Chess is wedged into a game not really made to support it, a bit like ye olde DotA was back in the original, so important commands are forced through the wee donkey that regular Dota uses to deliver items to players. That's the main clotheshorse in Auto Chess, and the mod already has that Candy currency to turn donkeys into flashier beasts. 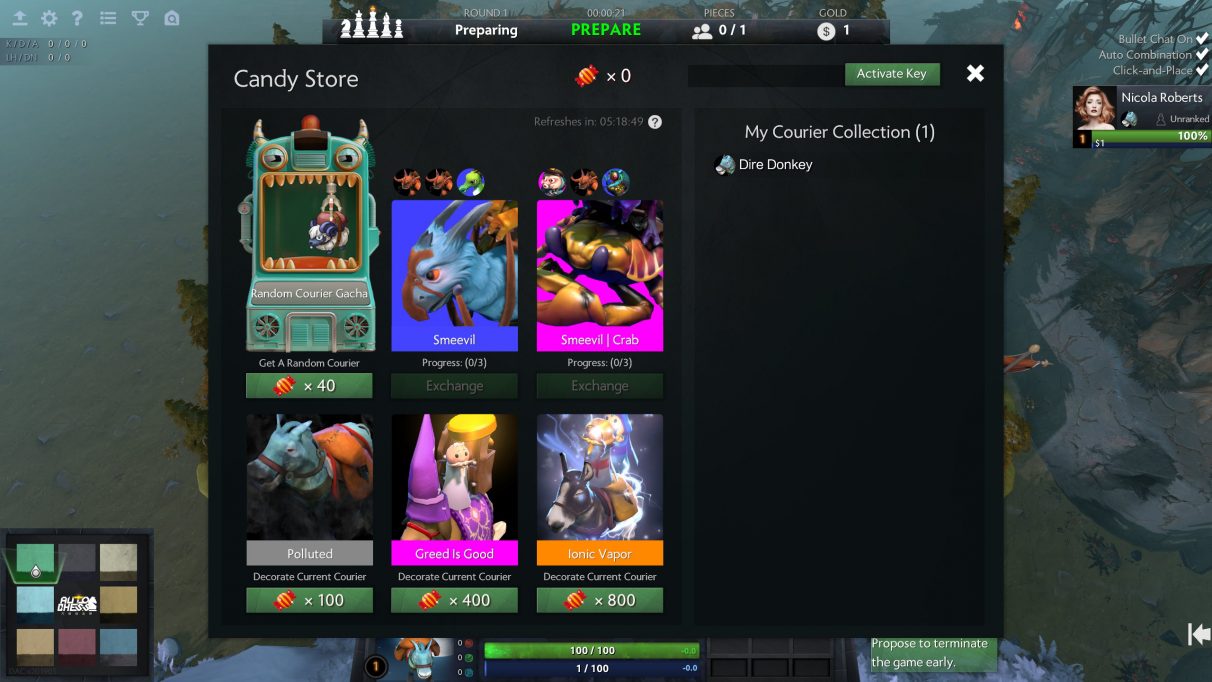 Auto Chess developers Drodo Studio say that people slinging a wee bit of cash their way for the Pass "supports the game and allows us to build content better, faster, more consistently."

The Auto Chess Pass isn't unprecedented--see Dota's Crumbling Island Arena Pass--but it is still rare for Valve to sell things for mods as authorised products in their own store.

I'm not surprised by that, given how poorly thought-out and ill-received 2015's attempt at paid mods was on Steam. Cosmetic bits for the most popular Dota 2 mod is fairly tame. It's also potentially a peek at how Valve intend to monetise their upcoming standalone version. I can't imagine they'll be content with just donkeys.

Drodo are still working on the mod as well as their own standalone version, Auto Chess for pocket telephones. That's basically the same game but with different art, replacing Dota characters with the digital equivalent of those unlicensed Halloween costumes that resemble the real deal at a distance. It's similar enough that Valve are helping Drodo transfer player data from the mod to the mobile game.

Valve's own standalone take on Auto Chess remains a mystery. When it'll come and how much it'll cost are still a mystery, though surely it'll be free-to-play like the mod? Especially after Artifact flopping, Valve must be thinking mighty hard about giving this second Dota spin-off a better start.