Premature Evaluation is the weekly column in which we explore the wilds of early access. This week, Fraser’s joining a civilisation and facing down a meteor in environmentally-conscious sandbox Eco. But mostly he’s building a terrible house.

The worlds of crafting and survival games are big balls of resources waiting to be exploited. Normally. Not so in Eco, where the world is a vulnerable, reactive globe that requires respect and nurturing. And only a wee bit of exploitation. It looks like a pretty Minecraft, but while it shares most of its fundamentals, Eco is as much simulation as a crafting sandbox, complete with an ecosystem that can be irreparably destroyed by human interference. 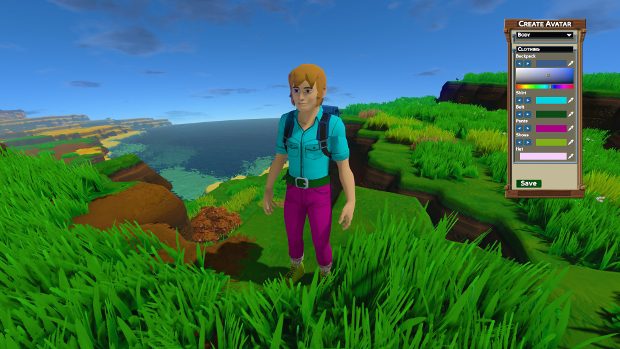 Eco’s ethical approach is antithetical to your typical sandboxes, which tend to encourage ceaseless consumption and expansion. In Minecraft, if you need 100 logs you just go out and get them. Your only concern is time and inventory space. In Eco, deforestation is bad for the air you breath and the animals that once called the forest home. Before you go chopping down trees, then, you have to consider the impact on the environment.

Hunting, mining, industry -- everything a civilisation needs to progress from the Stone Age onwards can harm the world. But civilisation is also the only thing that can save it. There’s a meteor heading towards the planet; a threat hanging in the sky that only advanced technology and teamwork can stop. 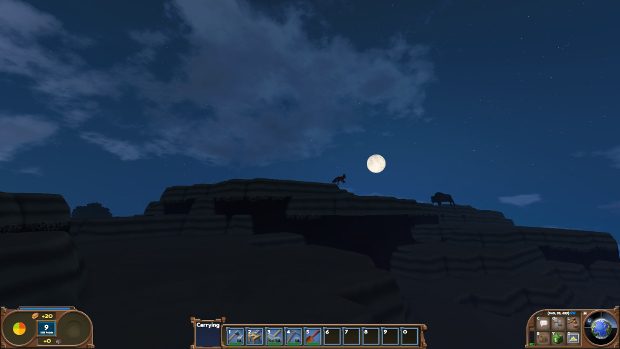 Being mindful of your impact on the environment, and trying to reduce it, is just the first and most basic of the four systems that civilisations and individuals probably should consider employing if they’re going to survive the impending hunk of ice and rock hurtling through space towards them. It’s accompanied by a mountain of graphs, maps and charts that simplify a lot of the real science behind things like climate change and ecological collapse; the civilisation system itself, where players band together and use their specialisations to avert disaster; and laws, with elected mayors creating civilisation-wide rules like restrictions on citizenship -- and thus population -- and limits on what woodland areas can and cannot be chopped down.

These systems almost serve as a succinct environmentalist’s manifesto. Awareness, data, grassroots activism and legislation. While Eco is not the first green game, it’s certainly the one that presents the ideology with the greatest clarity. Like most of its sandbox peers, it eschews demographics, but if you ever wanted to teach a kid why we need all these dumb bins, this is shaping up to be the game to do it.

Of course, it’s not an environmentalist’s manifesto; it’s a crafting sandbox and contains all that this normally entails. Digging, mining, endless crafting tables and chests, ugly log cabins and a great deal of walking around in the wilderness -- you know the routine. And Eco’s simulation leanings means that even something simple like gathering resources has an additional layer of complexity.

Resources aren’t these abstract things that exist only in your inventory. If you chop down a tree, the wood doesn’t suddenly just go into a pocket dimension until it gets turned into something else. So you need to physically carry the stone, wood, iron -- all the hefty stuff -- in your hands, which limits how much you can bring back with you. That means there’s a hell of a lot of running back and forth between crafting tables and resource spots. However! It’s a surmountable obstacle. With a bit of research and crafting, you can make a cart to carry all your stuff, but you also need to make paths and slopes, and that means you need to start learning some new skills. 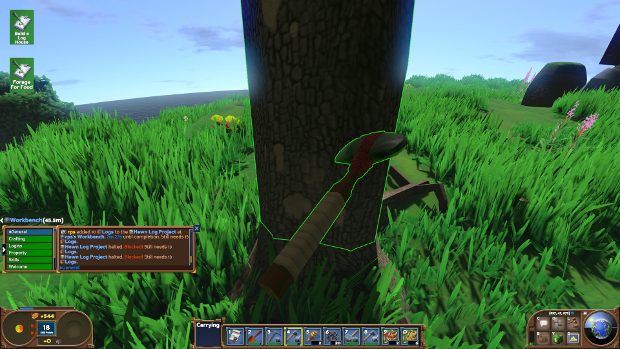 As you get experience and level up, you’ll get skill points that can be used to do everything from improving the speed at which you chop wood to unlocking advanced mechanical engineering. Books can also be created, letting you actually learn the recipes these skills unlock. It’s a lot of work to make a dirt path, and I wouldn’t be too surprised to see the crafting list get moved around. I shouldn’t be able to make a cart before I can even slap down some mud.

When you heap the environmental systems on top of all this, it does start to become bewildering. In single-player games especially, there’s just too much to tackle, even with the exceptionally generous cadence of skill points that you get for playing solo. You can become a jack-of-all-trades, but it doesn’t disguise the fact that Eco is designed for groups. A civilisation of one doesn’t have a great chance against armageddon. 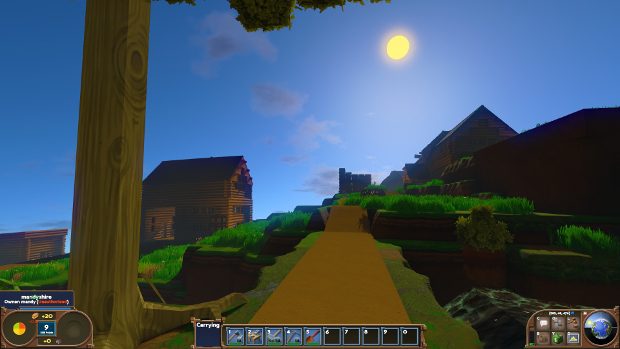 Eco’s civilisations aren’t just disconnected groups of people who can choose to work together if they fancy it. In multiplayer, where skill points come more slowly, players absolutely need each other. If you’ve dedicated your life to carpentry, then you might have an enviable house and workshop, but you’ll soon run out of plants and animals to eat and thus have to resort to farming. Without farming skills, however, you’ll end up spending all your time just doing subsistence farming, putting your carpentry work on the back-burner. Or you could get help from your friends.

If someone is focused entirely on farming, then someone else can specialise in engineering, constructing the civilisation’s roads and industry, without needing to worry about running out of energy. With more free time, people can get working on big projects: windmills, tree farms, a really huge bridge to nowhere. But with time constantly passing, even if nobody is in the server, Eco is likely best played with a regular group, or at least on a server with some organisation. 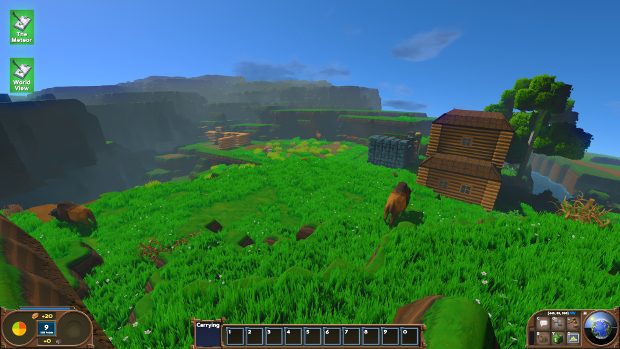 Taking a break from my own projects, I hopped between worlds like a dimension-jumping vagabond and indulged in some sightseeing. I had a nosey around in some neat little towns and solitary homes, but they all looked a lot like the world I’d come from, and not that far off my own solo world. Everything built out of wood, buildings just scattered around -- a low-key medieval vibe running throughout.

The race to save the world doesn’t fit comfortably with more creative endeavours. Everything you make is impermanent and the world fleeting. If you can get by in a boring wooden house, then why spend time building something more elaborate? Especially when any time you waste is time that could have been spent helping your civilisation avoid annihilation. 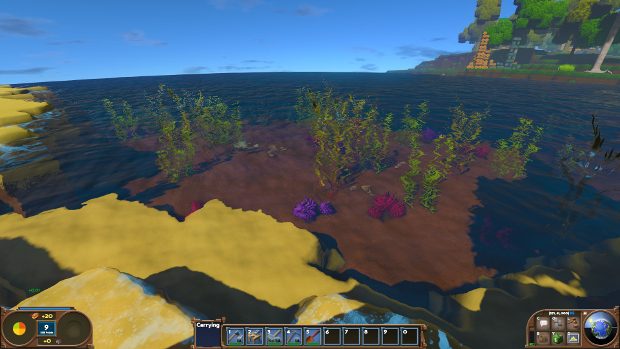 I definitely think there’s room for brief sandboxes where you can get a clean slate every few days or weeks, but if they’re to inspire any sort of real creativity the grind to get everything needed to fuel that creativity has to be a bit more easy going than your standard crafting game. Eco makes the grind more pronounced. And that’s completely unrelated to the environmental elements. My very first building project almost put me off picking up a hammer ever again.

I had to build a log cabin, of course. That meant constantly jogging between trees and my crafting table as wood was transformed into hewn wood, my first building material. Like all starter homes it looked like it was made by a particularly unimaginative five-year-old, but it was serviceable at least. Making a cabin is a necessity because several key crafting tables only work if they’re indoors. Place them outside and you’ll be able to set up tasks but they’ll not actually do anything. 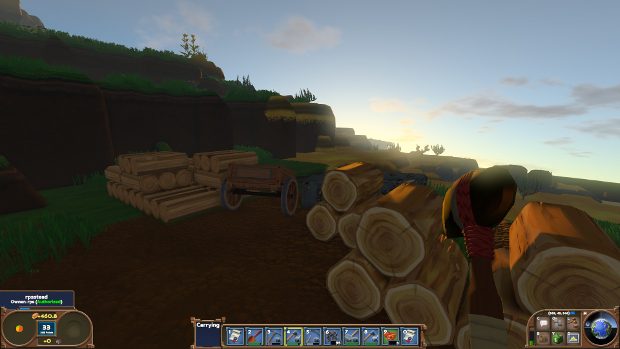 So I had my cabin, with my shiny new carpentry table set up inside. I wanted to let all the woodland critters know that important stuff was going down in my base so I decided to create a sign, then trotted off to get some more wood. When I got back, nothing had happened. My crafting table didn’t have enough room. It turns out that every crafting table has this weird arbitrary rule about how much free space it needs in the room. This one table had an entire cabin to itself, but that still wasn’t enough. So it was back to the woods with me, murdering more trees for my extension.

With every new table, regardless of size, the building had to be extended. I must have spent hours just gathering resources to build crafting tables and renovating my hideous cabin. Let me tell you, it is not a barrel of laughs. And it’s all a bit fiddly. Lots of fixing mistakes, trying to reach awkward places and blocks taking up the whole screen. If I was building something more exciting than a hut, maybe I could grin and bear more of the faff and clumsiness, but building even that has taken around 60 years. 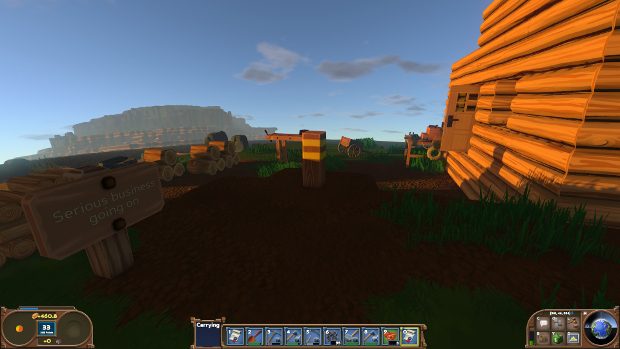 Eco is one of the boldest crafting sandboxes I’ve come across, and smartest, but despite its ambitions it’s still very much beholden to the same tired, old gathering and crafting cycles we're all very familiar with. The big picture stuff, forging a civilisation and saving the planet, that’s utterly captivating, but that’s not what the moment-to-moment action is like. While a meteor is homing in on your world and your mayor is making decrees, you’ll probably be trudging back into the forest, axe in hand, or standing near a crafting table waiting for something to finish being put together for you.