If you click on a link and make a purchase we may receive a small commission. Read our editorial policy.
Premature Evaluation is the weekly column in which Steve Hogarty explores the wilds of early access. This week, he is pursued by the insidious spectre of climate change in sandbox survival game Eco.

Ask anyone what Minecraft is missing and they’ll all tell you the same thing: an impending sense of climate doom, the pervasive fear of a warming globe that haunts the modern psyche like a crap ghost who keeps showing you scary looking graphs. Eco is an open world co-operative survival game that manages to do just that, incorporating that now-familiar sense of creeping dread which perches in our collective subconscious, and in our quietest moments reminds us that the planet is dying and that one day this hot, wet little space rock will boil over and turn back into mud, dissolving us all in the acidic stew that was once our oceans. So that’s nice.

Approaching the end of its first year in early access, this is a crafting and survival game in which the fragility of the environment is meticulously simulated. Cut down too many trees to build your house and you’ll destroy the habitat of the local rabbit population, forever depleting a source of food and cute ears from the server. Build too many machines and they’ll belch out industrial waste, polluting the ground or pumping noxious gases into the atmosphere. Eco takes something fundamental to the genre – the idea that these kinds of open worlds exist to be thoughtlessly plundered – and flip-turns it upside-down, asking players to consider the impact of our unfettered consumption on the world around us. 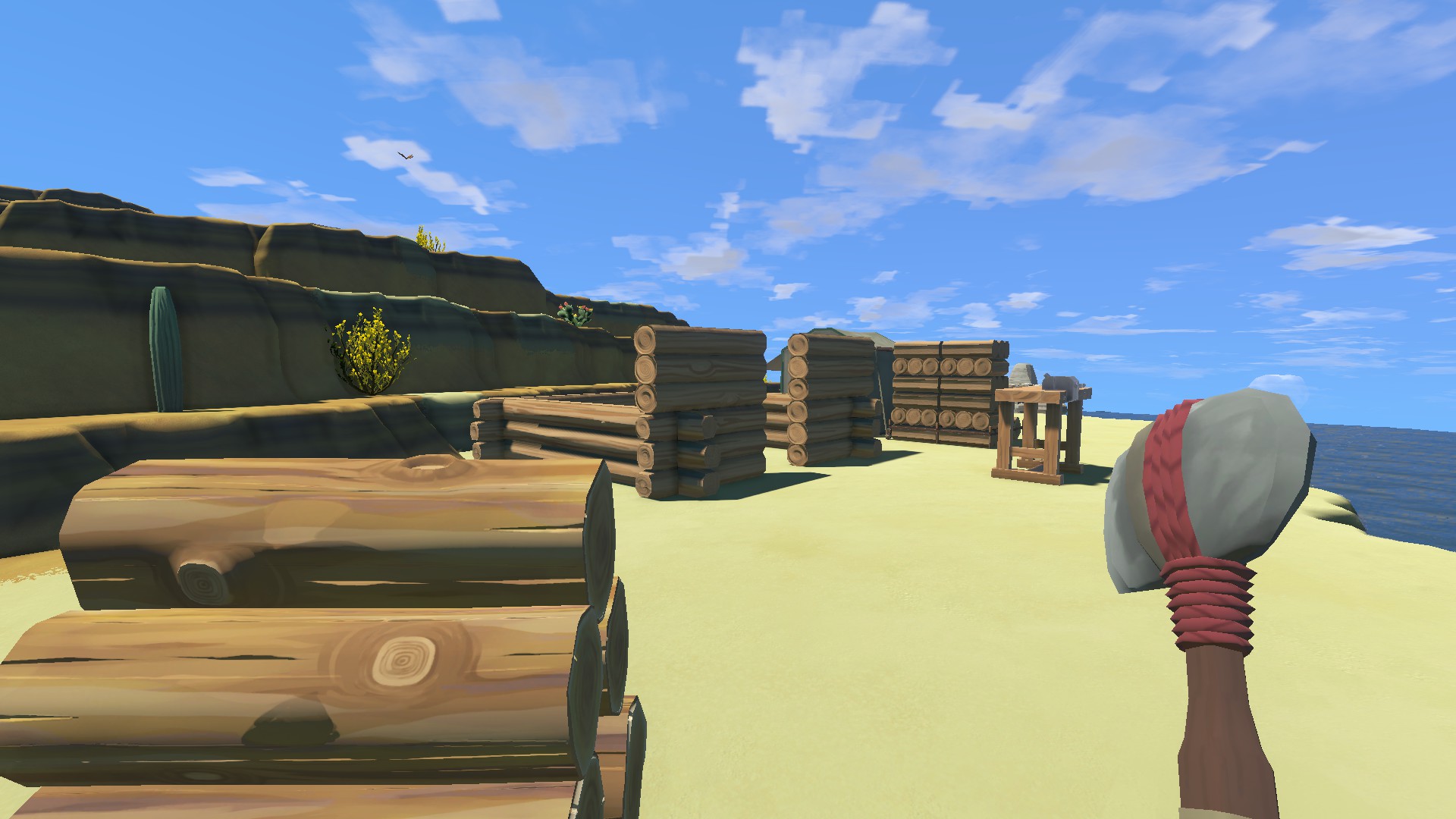 In practice, and much like in the real world, it’s hard to see the direct environmental impact of chopping down a single tree to make a cool chair. Taken in isolation, your actions amount to a grain of sand tumbling through the doomsday hourglass. Instead, it is the server-wide actions of every player in aggregate that brings about change on the tiny, spherical world you occupy. One house alone won’t poison a lake, but a small colony of players working together to extract rare metals from deep beneath the earth will begin producing waste materials that, if left unchecked, seep into the ground and murder any nearby tuna.

Eco is at its most educational when it’s diffusing social responsibility. Unavoidably, new players need raw resources to set themselves up in the world, and come armed with the tools required to exploit the planet – to consume wood and break stone so that they can have their very own workbench. So it’s beneficial for this tiny simulated society to provide for those who have less, through community stockpiles where materials have been responsibly sourced, as well as with government subsidies for performing certain actions. The elected president of one server might reward players with cash from the treasury for clearing forests of old stumps and twigs to promote new growth, or tax anyone who leaves honking great piles of toxic slag in the middle of a rainforest. 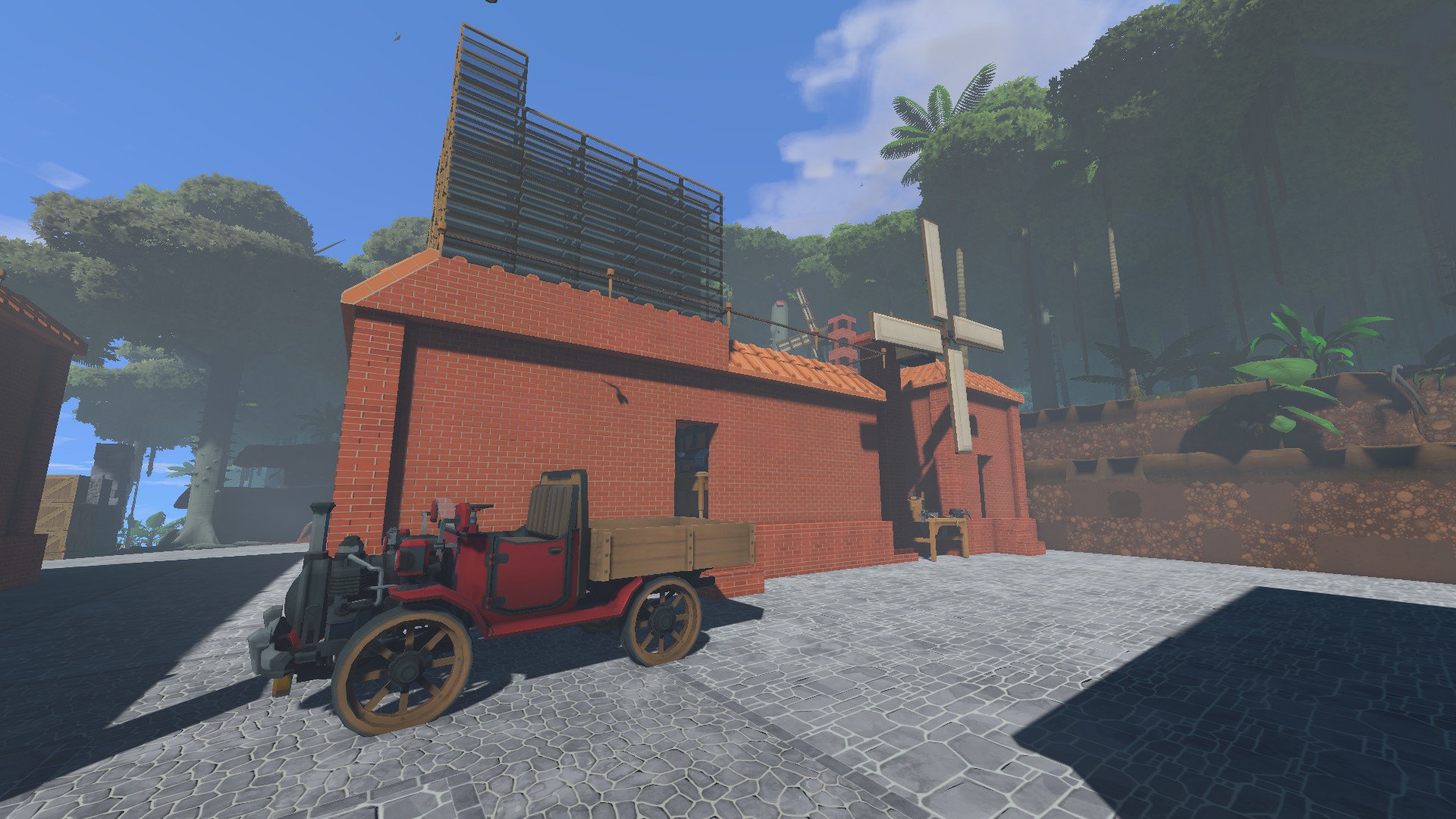 To ensure that clever players don’t simply languish in the stone age, never inventing modern conveniences such as oil-powered excavators and pollution-spewing trucks, instead pursuing an ascetic life in harmony with nature, the developers have set a giant meteor on a collision course with the planet, which can only be stopped by advancing through the game’s tech tree as quickly as possible. Depending on the server, the space rock will smash into the planet in matter of real world days, unless players can skill up and work together to build factories and farms and tools.

This has parallels with real world arguments around the appropriate way to tackle climate change. Science writer Charles C. Mann separates climatologists into two groups: wizards and prophets. Prophets believe in restraint, that reducing consumption is key to our species’ survival. Conversely wizards believe we can innovate our way out of any dilemma, that technology will save the human race, and that rather than dial back industry we should use every last drop of liquefied dinosaur to fuel scientific endeavour in the hope that further down the tech tree there is a special type of magic sponge or benevolent artificial intelligence that will fix all of our problems for us. Eco is a survival game for wizards, the ones who, when faced with the prospect of extinction, press down even harder on the accelerator so that we can get to Star Trek times sooner. 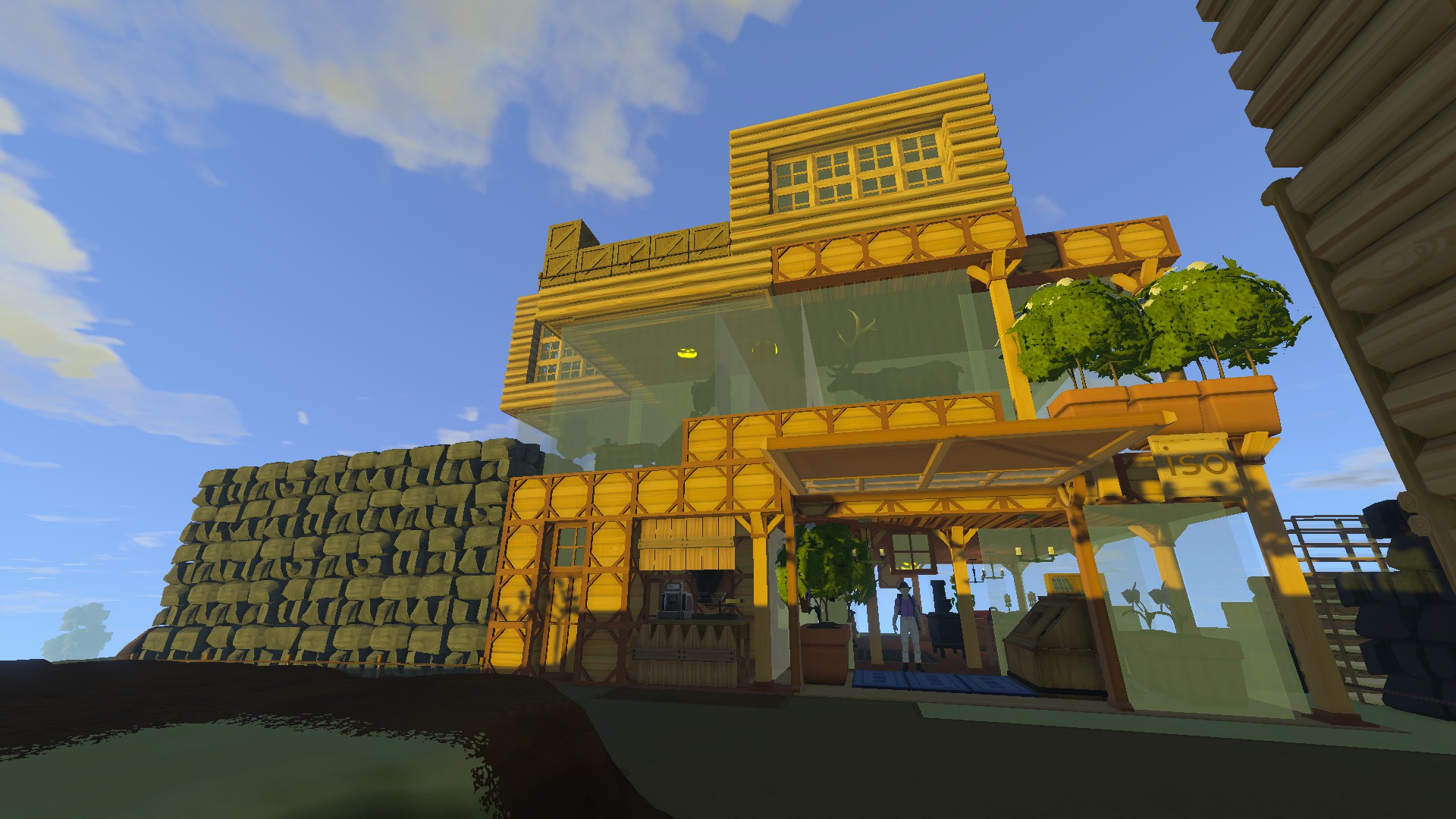 But all of this bigger picture stuff is impossible to see in the day to day business of actually playing the game. Eco functions like every other sandbox going, a grinding slog that’s more fun to read and write about than it is to play. Bash a tree until it surrenders its precious wood, drag the wood back to your camp and turn it into hewn logs, then stack them up in the rough shape of something that only the most generous onlooker would consider a house, and repeat. All of this while trying not to be utterly demoralised by the incredible glass and steel constructions of other players, which loom on the horizon like Ozymandian monuments.

A collection of realistic survival mechanics makes things way more strenuous than they need to be. You can run out of energy if you don’t eat, which can lead to having to repeatedly hike halfway around the planet in search of nuts and berries, especially if the community you’ve found yourself in hasn’t yet managed to invent agriculture. This at least reflects another facet of climate change philosophy, that sometimes you’re just too hungry for a steak to care much about deforestation. There are realistic limits on what you can carry too, gently nudging new players towards unlocking their first invention, a wheelbarrow to help cart your stuff around, as well as ramps and roads for it to travel along, the first baby step on the road to punching a hole right through the ozone layer. 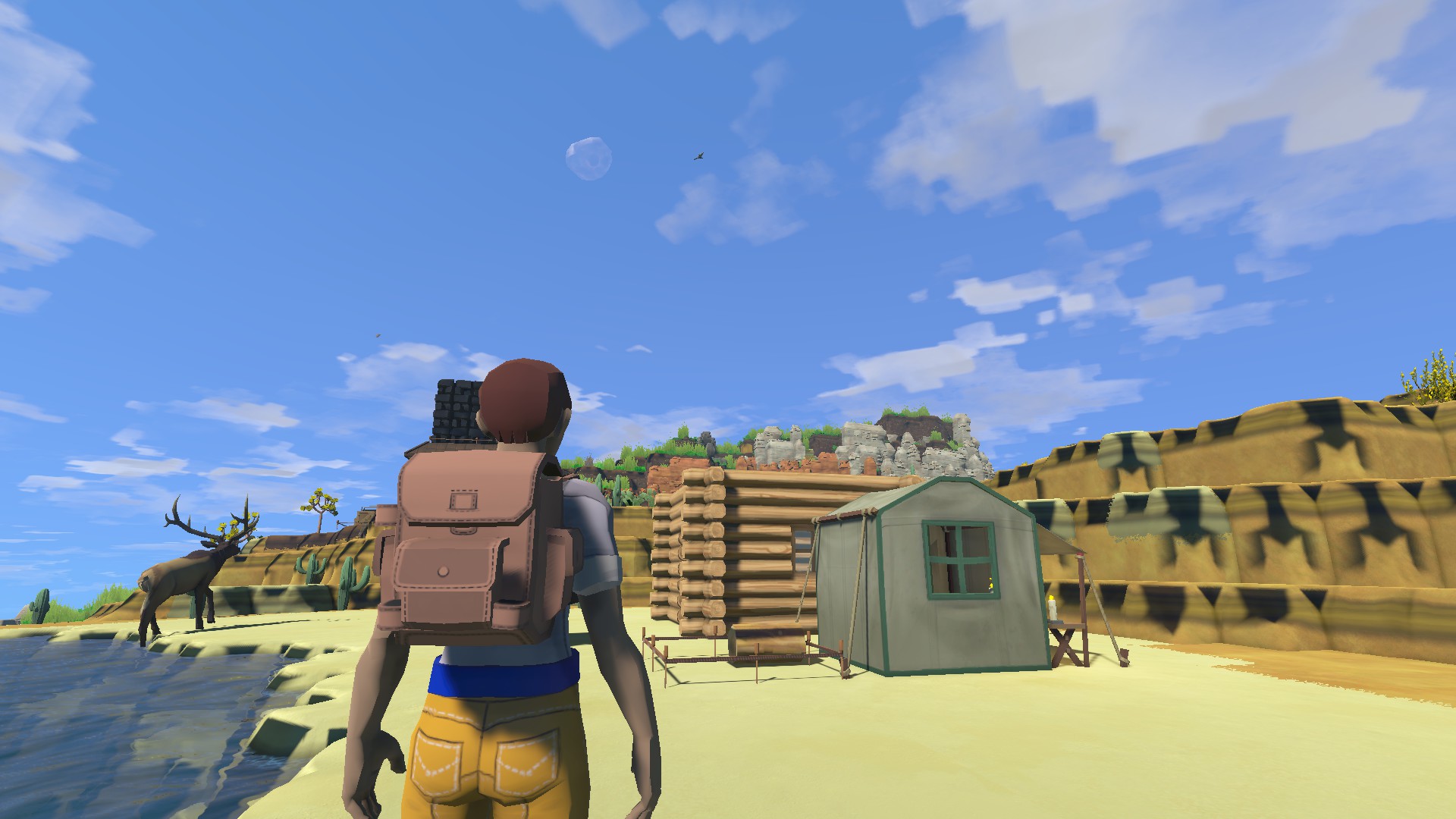 Eco is commendable in its mission to thread ecological nuance and serious critical thought into the sandbox survival genre, but it does its job a little too efficiently, inadvertently simulating the protective layer of climate apathy in which we’ve cocooned our petrified little minds to avoid going absolutely insane on a near daily basis. The game’s message is vital, but if working together to prevent the end of the world was any fun we’d already be doing it.