A pilot in Elite Dangerous has been stranded in the deep black void beyond the known galaxy for months. The adventurous pilot, commander “Deluvian Reyes Cruz”, zoomed off the edge of the galactic disc in an attempt to set a new record and become the person who has travelled the furthest distance from Sol. But when he was nearing the point of no return, he sipped too greedily from his fuel tank. 42 days into his journey and he was now stranded, with not enough fuel to make the jump back. He's been floating out there since November last year.

But now, there's a rescue mission afoot. Five pilots of the Fuel Rats (a group dedicated to saving marooned commanders) have been heading out to the explorer on a 600-hour rescue mission. It's their most ambitious rescue yet, and they’re due to complete it this weekend.

This is not the first time a player has gone far beyond the reaches of our Milky Way. In 2017, commander “Persera” travelled 65,652 lightyears from Sol, setting the record over the winter holidays. But she soon found out she was stuck there, thanks to a “fuel miscalculation”. That’s when the Fuel Rats came to her aid. The player-run group of petrol tankers and breakdown mechanics sped out and rescued the commander just in time for Christmas.

Since then, however, a handful of pilots have been competing to set new records on the galaxy's edge, upgrading their ships, and outdoing one another little-by-little, lightyear-by-lightyear. It has basically become Elite’s version of “how far can you swim into the sea without getting scared and coming back?”

Commander “Deluvian” had already beaten the "Persera" record, travelling 65,705 lightyears from Sol on a previous outing. But new rivals were upping the distance all the time. This would be his sixth such trip to attempt a record.

“My last expedition ended with a disaster,” he said in a forum post where he outlined his goal to beat a competitor’s record. “I thought about it and I decided not to give up. I am going to try [one] more time.”

But on the 42nd day, after travelling 65,788 lightyears from Sol (a new personal best) he made an error.

“I decided to go for one more sip on a supercruise tank,” he said, referring to the tank of fuel players use to travel in a super-fast flight mode. “Just to stretch my distance to 141Ly beyond Ishum's Reach... just one more LY...” 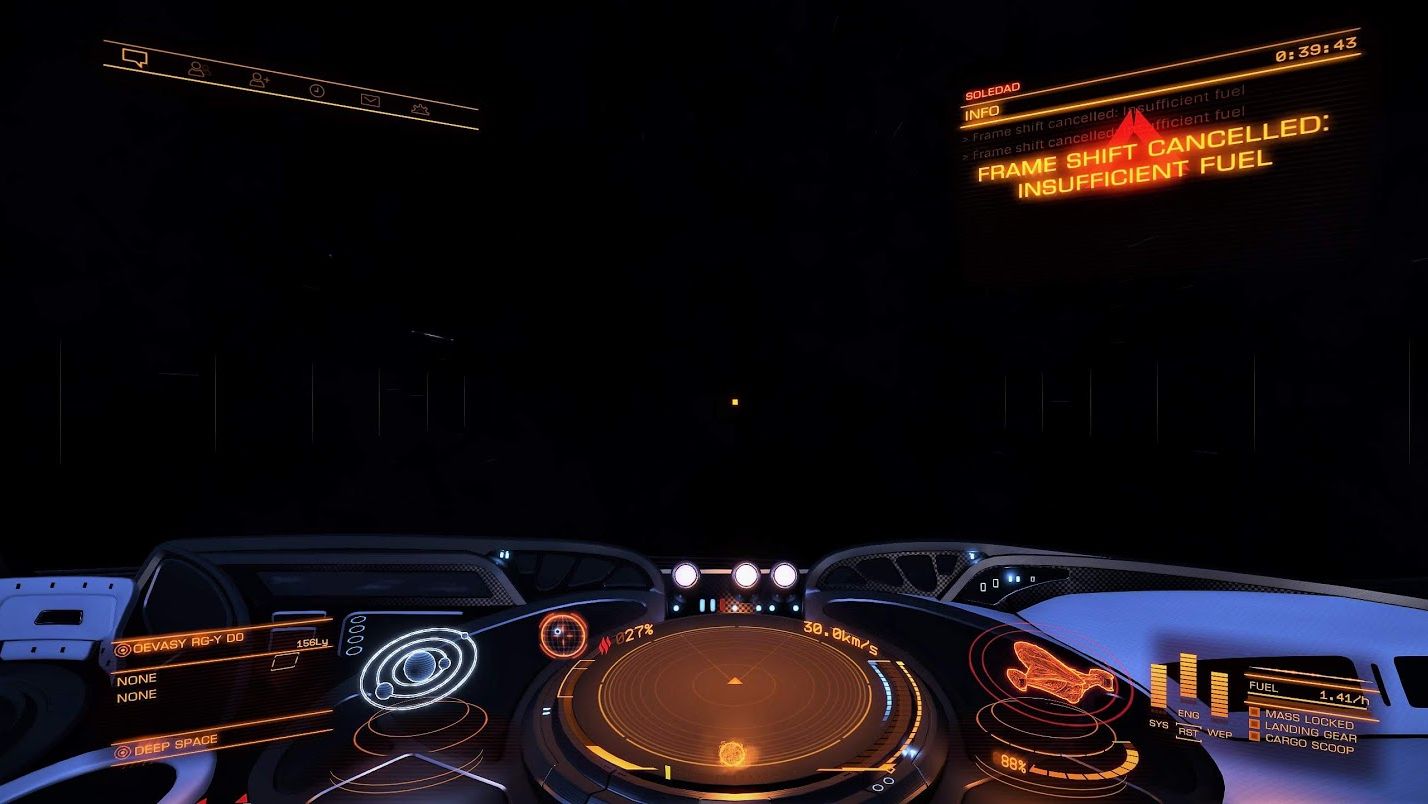 Because of the way Elite Dangerous ships work, you can’t “jump” out to this distant place like you would normally travel between stars. You have to travel in a slower manner, called supercruise. This takes time, and it means that the commander had spent about 600 hours of real-time reaching this place. With enough fuel, he would have been able to jump straight back. But with that "sip" he took a little too much fuel off the top of his tank. Now, he wasn’t able to jump back at all. He also had not beaten the record set by his rival, commander Kenneth McGrew (a pilot who has travelled 65,804 lightyears from our dinky little sun).

He was stuck. Weeks passed, and then the Fuel Rats started murmuring.

Some time later, a plan was ready. Four fuel varmints would supercruise out, organised in pairs. Each pair would have one “tanker” and one “rescue ship”. The tankers would refill their respective "rescue ship" partners and then warp back to the safety of the disc again, leaving the rescue vessels to carry on. A fifth pilot is waiting back in safe space to mine necessary materials they might need to get back to civilisation. Commander Deluvian posted this image and explained how the rescue would work. Basically it involves a long and very boring drive, and a lot of tiny, brave robots. Limpet drones who will transfer fuel from the rescue ships to commander Deluvian's vessel. 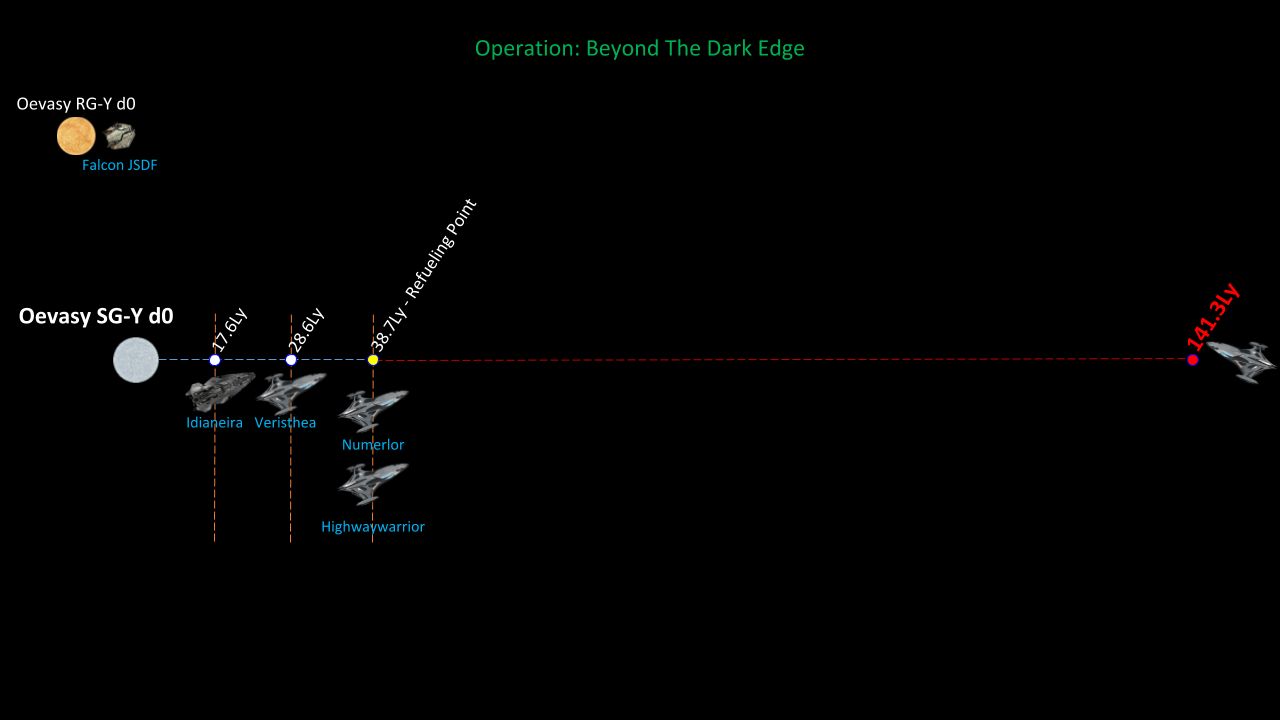 One of these rescue ships is commander “Highwaywarrior”, a veteran of the previous extra-galactic rescue mission. He outlined the difficulty of planning such a difficult rescue in the same thread.

“It's taken over 3 days to work the numbers and the science to the point that we have a detailed plan,” he said. “[Five] of us are en route to assist Cmdr Deluvian. In total we have the capacity to carry 2576t of fuel and 632 limpets.

"Out of the 5, only two of us will actually make it to him to deliver the fuel he needs. It is a team undertaking the likes of which I have never known before in the Fuel Rats. We have started as a team and we will finish as one - and we will get Cmdr Deluvian out of there."

That fuel rodent also has a Twitch stream in place. It’s just speedy flying for now, although the rescuers and stranded pilot sometimes have to do a “bearing check”. This involves our boy the explorer turning on his distress beacon for a moment, which lets the rescue ships see whether or not they’re still driving in a straight line. So far, there haven’t been any problems. The tanker ships have done their job and warped back to safe space. The mission is going according to plan and the two rescue ships are nearing their final approach. The rescue itself is estimated to happen on Saturday February 23rd.

We’ll keep you informed if everything goes smoothly. Or if something awful happens and everyone blows up. Either way, it’s another long and dedicated rescue operation by some of Elite’s finest vermin. Well done.

All images by commander Deluvian