The galactic skulduggery of EVE Online [official site] continues. The infamous spaceship MMO has seen a massive theft occur in the typical Eve fashion: a dissatisfied higher-up of one of the game’s military corporations has flipped to another group, bringing with him not only money, resources and ships but, more significantly, a huge space station – a Keepstar Citadel. This is one of the most expensive and formidable structures in the game. Imagine if Grand Moff Tarkin suddenly defected to the Rebels and handed them the keys to the Death Star. And then the Rebels wrote “LOL” in giant letters next to the space station. That's what's happened.

(Technically, that writing is done with "warp disruption fields" or "bubbles" placed far in the backdrop. These are normally used to prevent ships inside from warping away to safety. Perspective just makes it look like there's a "LOL" next to the station. But still - good work, sky-writers.)

To explain the theft in more detail: a player called The Judge has become embittered with his corporation, a group of pilots, fighters and businessmen named Circle of Two. He has his reasons for turning (which you can read in detail on this Reddit post) but basically he was annoyed with his boss and another group offered him billions of ISK (the in-game currency) to “flip”. Which dastardly group offered him the briefcase full of fresh banknotes, you ask? Why, none other than our old friends, the Goons.

The Goons are known more officially as “The Imperium” and are headed by a fellow called TheMittani, a notorious player who was once the de facto king of space. He and his empire finally fell from grace last year in a huge war fueled by casinos and bankers. I covered that in depth here. Today, those gambling institutions are banned, the war is over, and the Goons are recovering. During that great conflict, however, one of the worst break-ups was between Circle of Two and The Imperium. These two groups used to be buds. But when things got hot, the relationship broke down and Circle of Two left the alliance, resentful of being what they termed “a meatshield” for the Emperor (they were sandwiched in a particularly nasty part of the frontlines). The Goons shouted at them, calling them turncoats and traitors, and pledging to have vengeance one day.

Well, deserved or not, they have it. 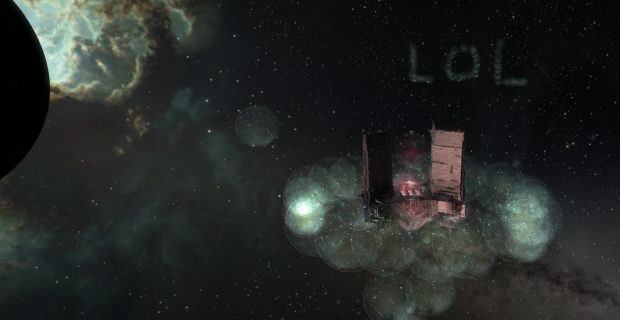 The player who flipped, The Judge, received 300 billion ISK for delivering the Keepstar to his old enemies, he says. And he’s now a member of the Goonswarm himself. The citadel is an expensive structure, costing anywhere between 240-250 billion ISK. More importantly, it holds an unknown sum of ships, equipment, ammo, resources and other marketable goods within its hull. It is possible we’re looking at the biggest theft of goods in Eve’s history but we can’t confirm that to be the case. Although Andrew Groen, an Eve historian who wrote a whole book on the player-run universe, has called it "one of the most significant works of espionage" in the game's history.

As with all things like this, it has led to an explosion of drama. Another group, TEST Alliance, showed up at the space station with an “escort fleet” to ferry refugees out of the system before the inevitable arrival of thousands of Goon pilots, onlookers and opportunists. This was according to player-run news organisation Cornak, who followed the theft as it was revealed.

Meanwhile, Gigx, the leader of Circle of Two, has been banned for reacting, let’s say, very badly to the backstab. He was one of the pilots involved in the war last year and has an unhappy relationship with the Goons.

The “state-owned” news site Imperium News Network has a fuller report of the story. But of course, be careful what you read. Eve is still 10% spreadsheets and 90% propaganda.