If you click on a link and make a purchase we may receive a small commission. Read our editorial policy.
Developer: Ubisoft Montreal
Publisher: Ubisoft

In many ways, Far Cry New Dawn is the most Far Cry game the series has turned out. Sure, the apocalypse may have ushered in an era of goons with health bars and levels. But there’s also a bit where you take some drugs so you can survive a boat ride to a man who gives you more drugs, in order to punch a bear that represents your soul.

In other words, this is the best Far Cry yet. But let's get our bearings.

New Dawn takes place seventeen years after Far Cry 5, which I finished but never paid much attention to. I got my fill of culty twaddle within the first few minutes, then skipped almost every cutscene till Montana was a gonna. I'm sorry -- not to mention puzzled -- if you care about Far Cry 5 spoilers, but, spoilers, it turned out the big bad in that game had a big bad pile of nukes. Which he totes used. 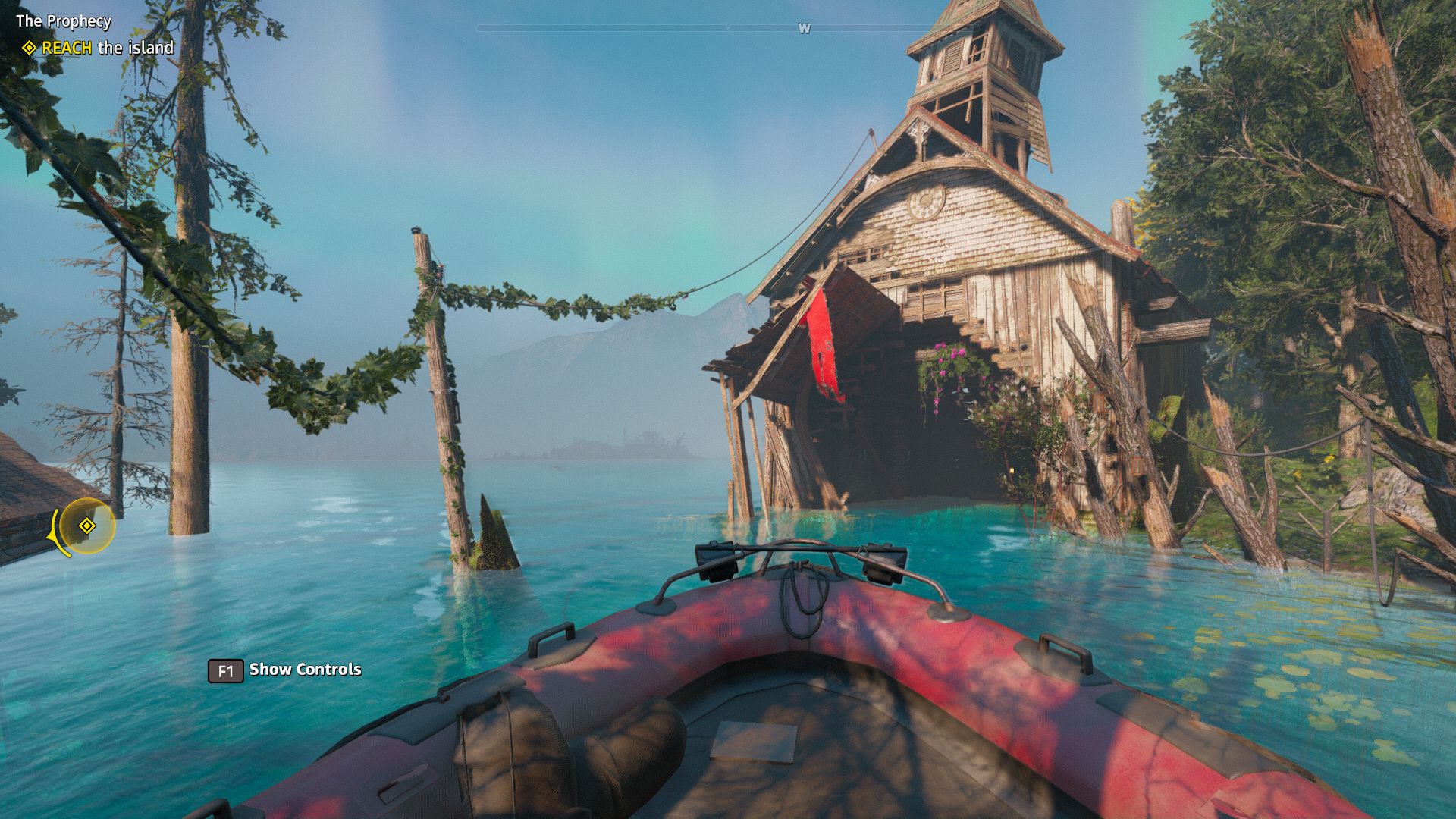 You emerge into a civilisation (and a map) born from the ashes of the last, part of a gang of fixer uppers attempting to reestablish America. It's an excuse, not that one was needed, to indulge in Mad Maxian absurdity. New Dawn embraces that to some degree, though it's more of a one-arm shoulder squeeze than a full-on bear hug. (Not that there is any shortage of actual bears.)

I do like the jump into a properly fictional world - a more restrained one than Blood Dragon's, with the modern accoutrements lacking in Primal. Nuclear armageddon turns out to have worked out great for the colour purple. It's plastered all over both the wilderness and the buildings of the bandits you spend the whole game fighting, who seem to have spent most of the last seventeen years spray painting cars and sticking them in the ground. 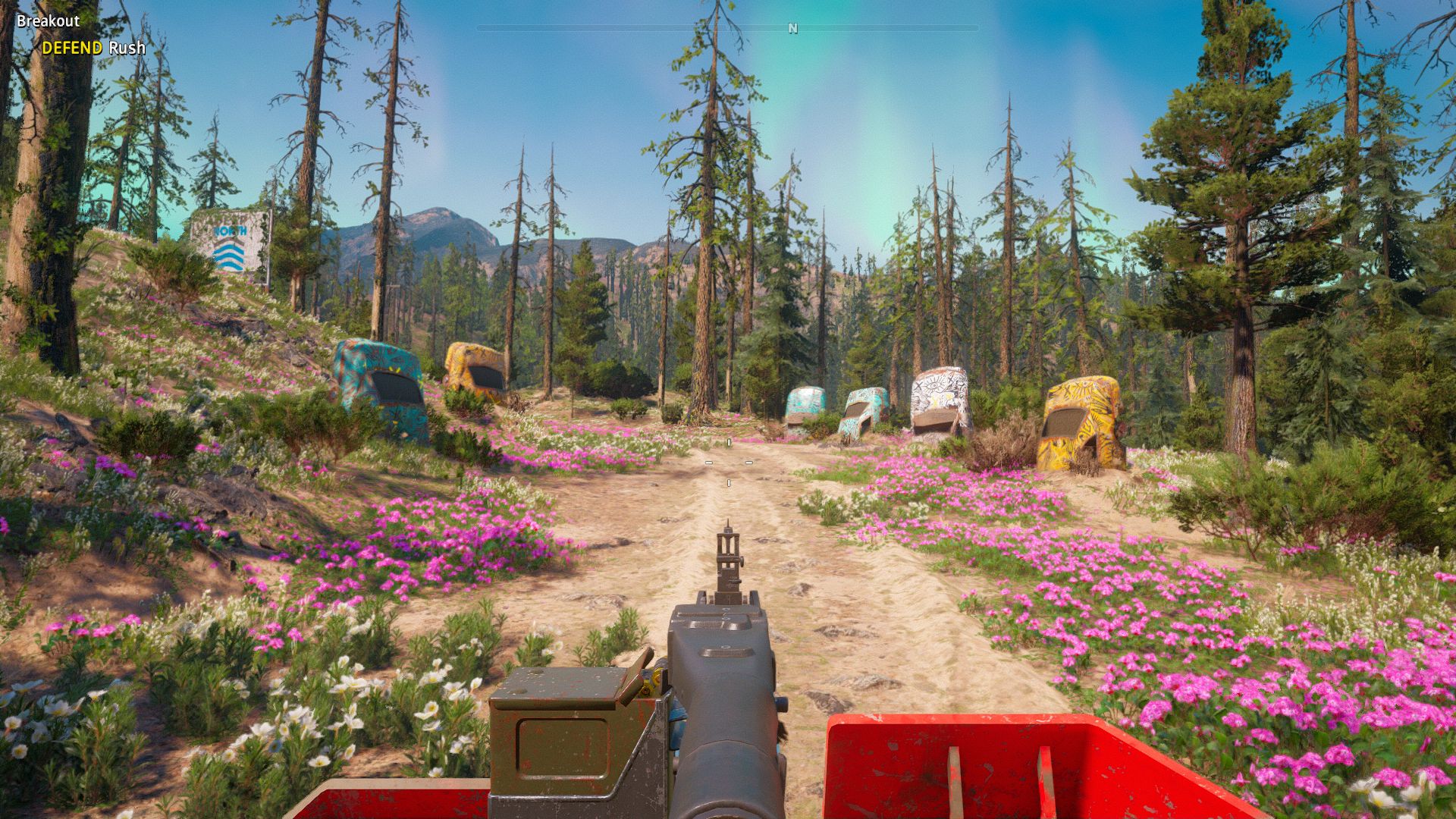 It's the most visually interesting setting I've seen Far Cry tackle (and you can get the most out of it with our graphics performance guide), but it's also tamer than it should have been. I got to see verdant fields juxtaposed against backdrops of scarred desolation. I wanted to see a more twisted version of Montana, with stranger animals, mutants, weird geology, funky plants. There are a few "monstrous" animals lurking around, but they’re just normal beasts covered in lichen and glowing weak spots.

There are, at least, kicks to be had in seeing familiar locations swamped in time and water. I had fun bumping into some familiar faces, too, such as a certain (now blind) chopper pilot. Or the shotgun dude named Shark, who's now co-parenting and lives with his baby in a sulphuric bog. Fortunately most (if not all) of the bliss-darting Cult bastards from Far Cry 5 perished along with social order, and left behind the best iteration of open world Far Cry nonsense yet. 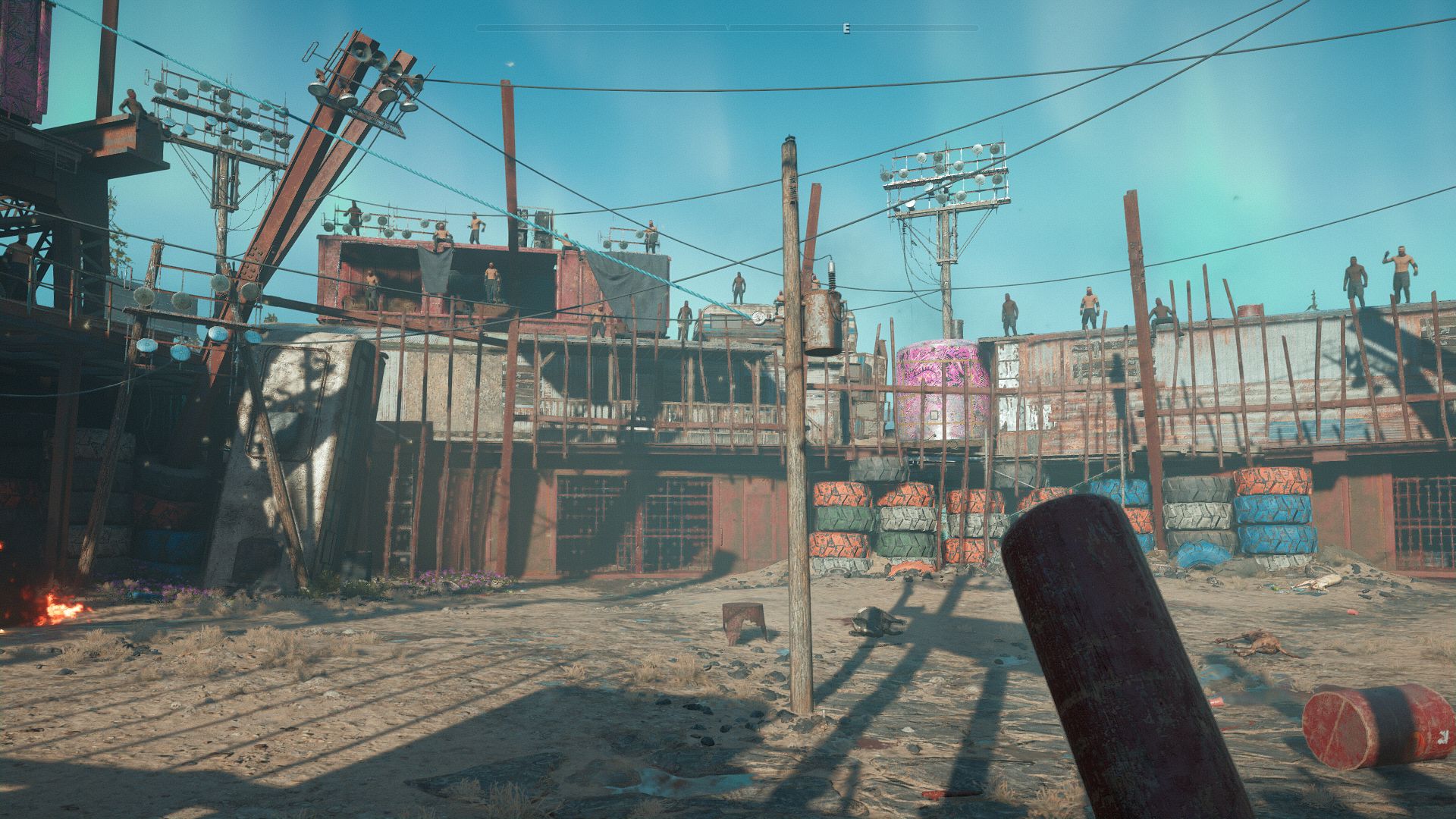 It is an iterative improvement, to be clear - a few steps forward, not a leap. There are trucks to steal and hostages to free, as per, but now they're tied to structures in the game that makes them feel less throwaway. I never used to bother with those trucks, but now they contain sweet sweet ethanol.

You need ethanol to build and upgrade facilities at your base, which unlock everything from weapon crafting to fast travel options. If that sounds vaguely awful, I understand. I had the same initial reaction, but my appreciation grew along with my settlement. It's a more satisfying, tangible way of gating power progression -- especially when the most lucrative source of ethanol is also the most fun.

I'm talking about outposts, of course. I still relish picking them apart, sneaking around combat puzzles that offer more or less the same thrill as they did on a tropical island back in 2012 with Far Cry 3. This is the first time I haven't been able to get my hands on a silenced sniper rifle within the first hour or so though, which makes more of a difference than perhaps it should. I'm the sort of player that needs those limits placed on me, just as I need that nudge to go steal trucks. 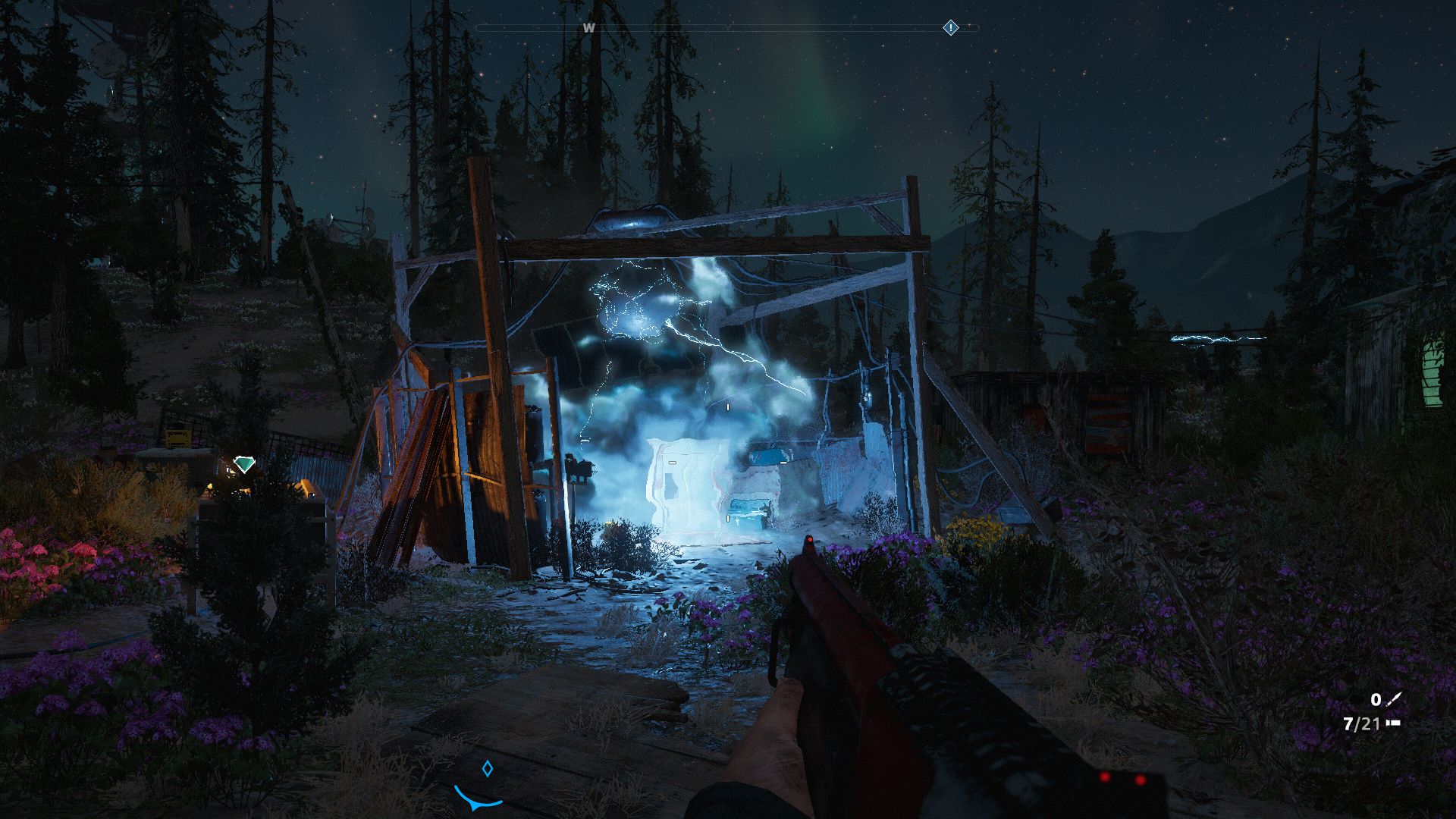 I could still have done with more limits, mind. I might not have had access to a silenced sniper rifle, but I did have access to an unhinged granny with one of her own: the companion system from the last game is back, although now you can only have one pal at your side. Those followers also do nice things for you depending on how many people they've killed, like fixing your car or fetching thrown items. That granny has the advantage of being more useful for silent take downs, for instance, but the disadvantage of not being a dog. Or a massive boar called Horatio.

I've got anecdotes about Horatio saving my bacon with last second charges, but they're the sort of anecdotes you've heard before. One genuinely new -- and very welcome -- addition are the expeditions. Chat to a Frenchman with a helicopter, and he'll whisk you off to one of seven unique areas where you've got to steal a backpack loaded with crafting gubbins. If outposts weren't still so compelling, these would be the highlight. 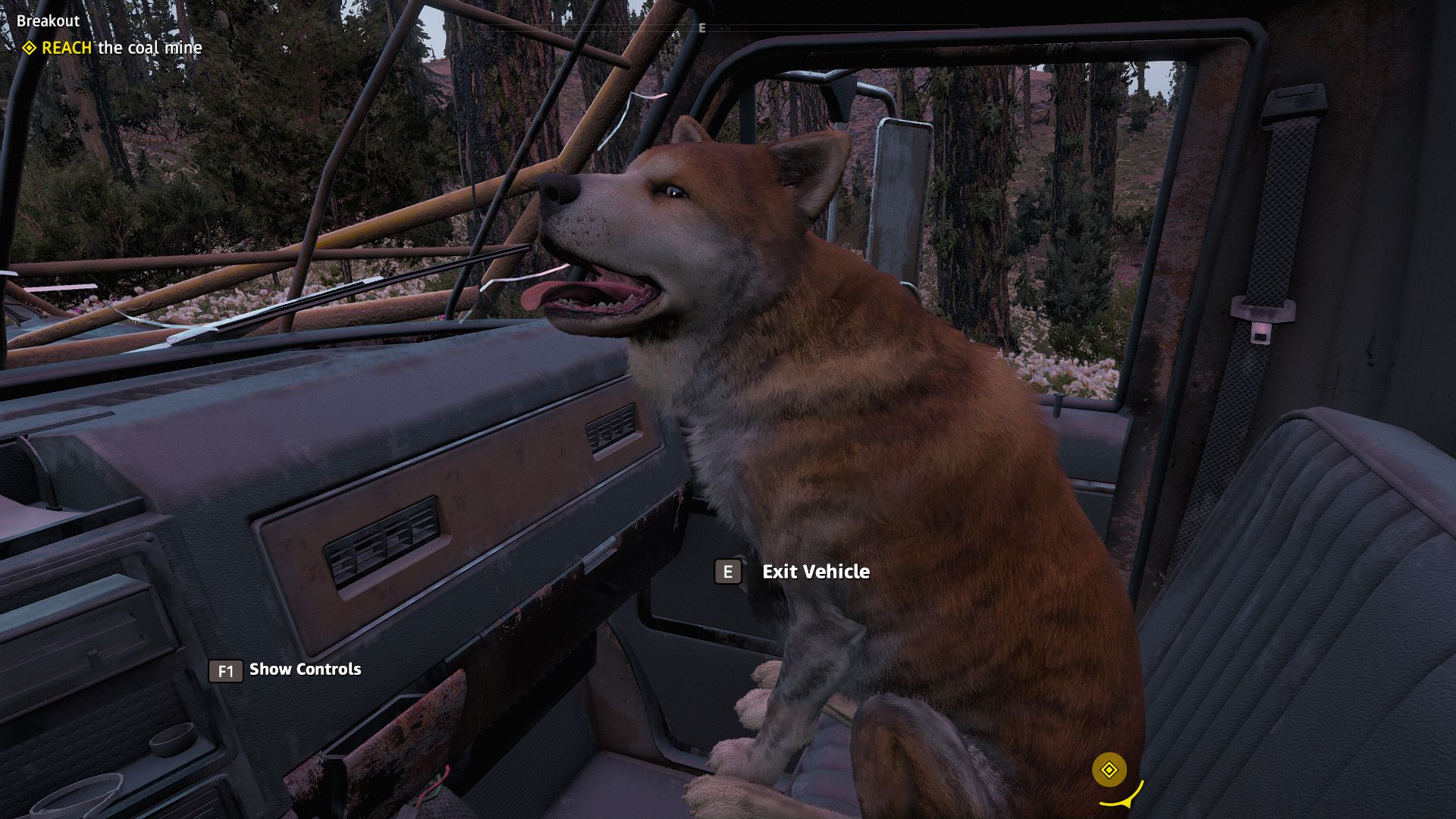 They offer your eyes a break from the purple and your fingers a break from typical Far Cry fare. I like how they blend sneaking with assaulting, eschewing some of that 'choose your own approach' attraction, but forcing me out of my comfort zone. They're also just cool places to visit, including a fairground enveloped in jungle and the crashed corpse of the International Space Station.

Like most everything in New Dawn, it's an experience that's familiar at its core while fresh enough to entice me back. I started off by saying how the enemies now come equipped with health bars and levels, but there's a reason I haven't mentioned them since -- they really don't change much. Most grunts still die to a headshot from a decent gun. It's as ignorable as the story -- which I still engaged with more with than Far Cry 5's, partly because of its brevity.

Some bits aim for poignancy and miss dramatically, but the main villains have their share of sinister moments. They're two female twins, who take turns monologueing and being dicks to people in the background. Waving knives at bystanders, handing live grenades to crying children. That sort of thing. I never found them actively boring, unlike old Joey Seed. 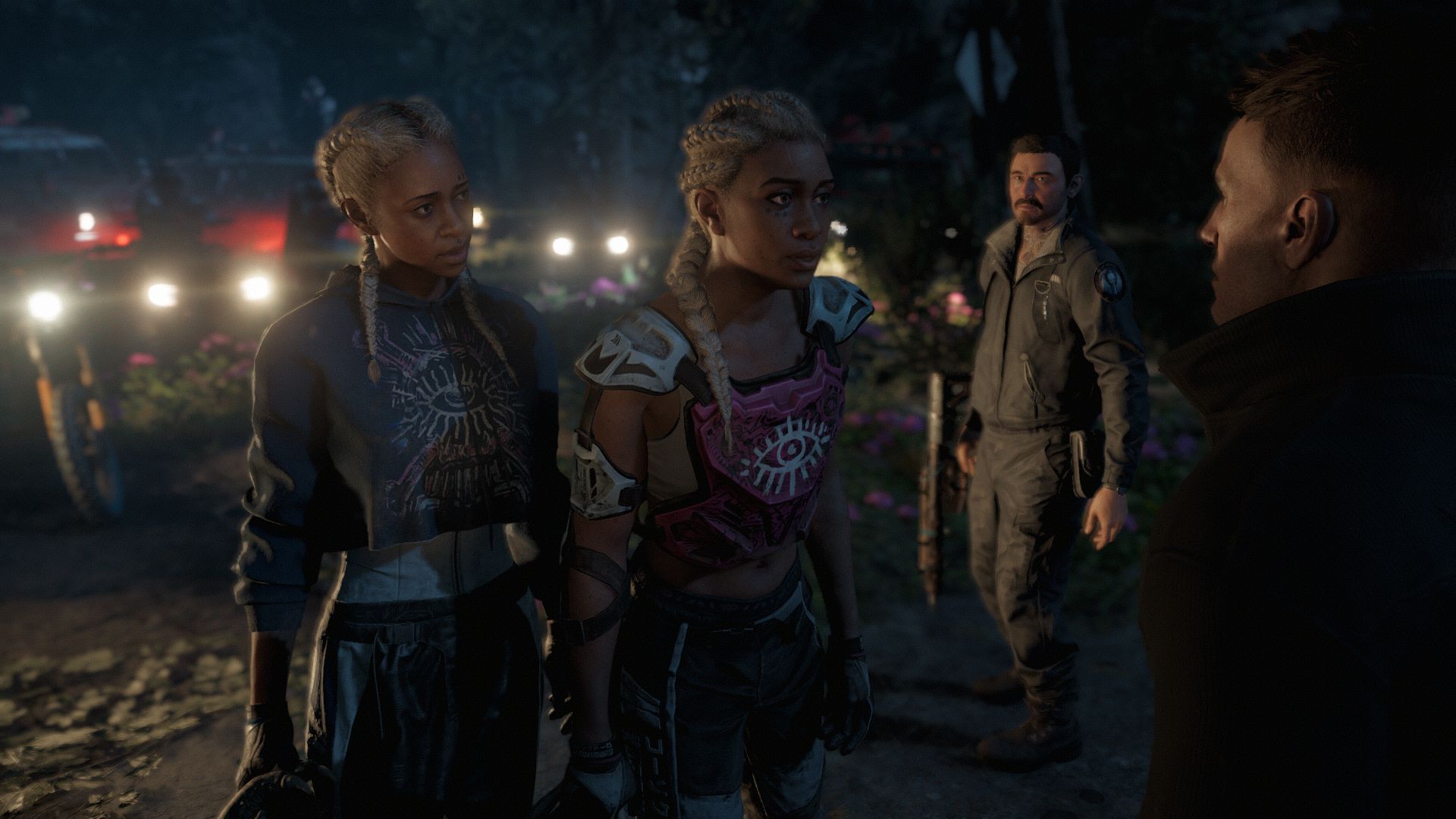 That's good, because you need to plough on with the main missions if you want to unlock that double jump - and trust me, you do. Jumping down slopes and hammering the wingsuit button in the vain hope it will open has long been a central tenet of Far Cry. With that double jump, hop off the slightest hill and you're airborne. I'm tempted to call it transformative, but I know that's because double jumps and wingsuits are subjects so close to my heart.

Still, that double jump provides some of the fresh air Far Cry needed under its wings. The setting is too tame, and the fighting much too familiar to soar - but if another dollop of Far Cry sounds appetising, tuck right in.