This odd little game has blown in out of nowhere for me. I'd not heard a single thing about it before playing but within minutes it had completely won me over. After a few hours I adored it. I've never played anything quite like Far: Lone Sails, and in this turbulent world of ours its meditative and gentle journey was exactly what I needed. And, you know, I got to pretend to be the captain of a mad sail train for a few hours, so that's something.

You start in a ramshackle little house. The portrait on the wall, showing yourself in that lovely little red coat, lets us know this is home. Yet it's not this rundown shack where our heart belongs. Instead it's the great lumbering vessel parked outside. Wood and metal combine to form a strange land boat, one huge wheel with an engine. A ramp lets you onboard and inside is everything you'll need for your journey. Pile some fuel into the engine, push the accelerate button and vent that steam. You're off, slowly but determinedly.

The world of Far is a post-apocalyptic one. A dried out sea bed lies in all directions. Yet it's a world devoid of monsters or dangers. It's sparse but not exactly desolate; there's still life here. Birds and cattle with signs of other remaining humans are littered throughout, but it's the massive sea vessels left stranded in the dirt that really leave an impression. Huge shadows that can eat up the whole screen. Despite being in your own vessel, you still seem very small in the grand scheme of things. These wrecks give way to huge open plains, though – big spaces where you feel like you can just take a nice deep breath. It's not the lush, overgrown world of Enslaved or The Last of Us, but it's an appealing post-apocalypse all the same. More than just the sights fire the imagination, the game's lovely score sets the perfect pace for things. Evoking the spirit of travel but at a pleasant speed. You're not in a rush at any point. 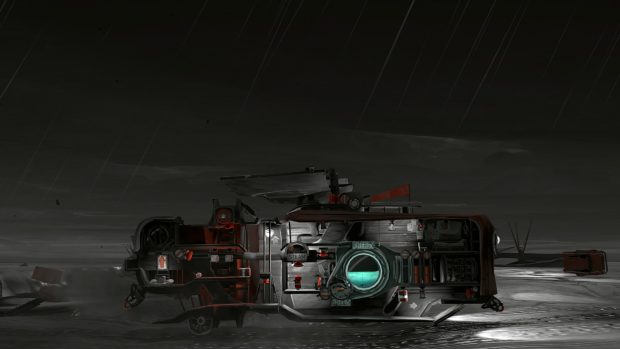 Far's initial hours will see you wrestling with your engine, stopping every few minutes to collect fuel to keep going. Just as it starts to drag, though, just as you’re dreading the game will maintain this stop and start journey, you're given your sails. It's magical moment because the opening has made it clear just what a difference they're going to make. Now you've got speed, now you don't always burn fuel or keep the engine going. You can stand on the bridge and watch as the world rolls past, the wind pushing you forward.

Along the way you'll gather some other additions to your vessel, all while stopping to gather fuel or clear an obstacle from the road. The puzzles are terribly simple but this isn't really a brain teaser of a game. It's a mood piece, letting you sink into an evocative world with as little resistance as possible. There are some challenges, like keeping an eye on your fuel and making sure to look after your vessel. It's not a world away from Lovers in a Dangerous Spacetime, with you having to race between various buttons and tools on the vessel to keep things going. The controls can be a little fiddly as you tumble around trying to haul fuel about or grab a firehose, but the game's so devoid of pressure that it's never much more than a mild annoyance.

These sections of managing the vessel are balanced out by those where the wind is just right and you can simply sit on top and take in the sights. It's a hand crafted experience though, and the journey is littered with set pieces to shake things up, adding just a little pressure to proceedings. These segments are reminiscent of Inside's penchant for one off and carefully crafted sequences but they're much, much less taxing, though some are no less imposing. An early segment saw me approaching a dark storm, setting me racing to the roof to lower my sails. From then on I was dependent on my engine to push through the harsh conditions, the machinery taking a battering as I persisted. Then, as I stopped to gather some vital fuel, I realised the storm had passed, the dark clouds had gone and in the quiet of the night the stars had come out. Truly wonderful. 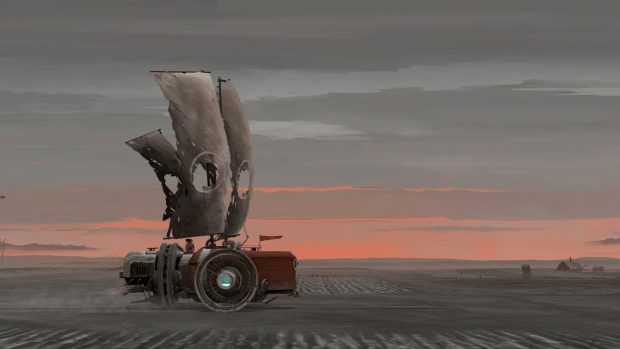 As you move through this world you can also collect little trinkets to bring on board your vessel and stow away. Wee mementos of places you've been. I was particularly fond of a little bell I saved from the sands, but there's loads of inspired little things to find that I wouldn't dare spoil. Though god forbid the day come where you're so sapped for fuel you need to sacrifice your little treasures to keep the engine going.

All of these elements come together to make you embody the role of this lone captain. Your strange vessel will become your Millenium Falcon. Any harm that came to it gave me a little pang of sadness. This was my… ship? Train? Sandcrawler? Anyway, whatever it is, it was mine and my home. I became familiar with its layout, all the little tricks to keep it running and get it going with a little more speed. Games that give us spaces to become familiar with have a special place in my heart and Far: Lone Sails has earned its place there. A game that offers us both a memorable journey and a place to call home. Of course, how much meaning can one have without the other? Far: Lone Sails gave me a wistful sense of both that I won't soon forget.

If this has piqued your interest in Far: Lone Sails, then you're in luck. Cruise over to The Mechanic to read Alex Wiltshire's dive into Far's sound design.