If you click on a link and make a purchase we may receive a small commission. Read our editorial policy.
Premature Evaluation is the weekly column in which Steve Hogarty explores the wilds of early access. This week, he's not here, so Alice Bee is trying to survive and thrive in the watery city builder Flotsam

Depending on who you ask, the apocalypse is not happening, extremely close, or already here. There's already been at least one casualty in the form of usual premature evaluator Steve Hogarty, who has either been raptured or is away for two weeks. No other explanations are possible. I have filled the time this week with post-global flood city builder/Waterworld simulator Flotsam, a special favourite of vidbud Alice L.

I, too, am a fan of city builders, but this is more of a city… floater. Starting with little more than a big plastic jar of fresh water at your city centre, bobbing up and down in a vast and placid ocean, you send your cheerful little survivors out to collect soggy trash from the sea. With these raw materials you build out floating walkways, strap on little beds that are open to the sky, cobble together storage, and so on and so on, eking out a damp, strained existence from one area to the next.

Flotsam is only a couple of weeks out from its early access launch, and is still bare bones in a lot of its features. But smash a cheap Prosecco on the side and send 'er down the slipway, lads, cos those bones are strong enough to hold plenty of meat if it arrives! Bleugh. I have made myself queasy with my own peculiarly mixed boat/animal body metaphor, so let's move on -- as indeed, your floating town must.

Mine is called Costnerville, for reasons that I trust need no explanation. Costnerville is very badly planned, because resources in this game are very meaningful, and so unbuilding and rebuilding things is quite time consuming -- much more so in any other city builder I've played. My little Costnerians are desperately needed on other tasks, so buildings stay where they're put in Costnerville. 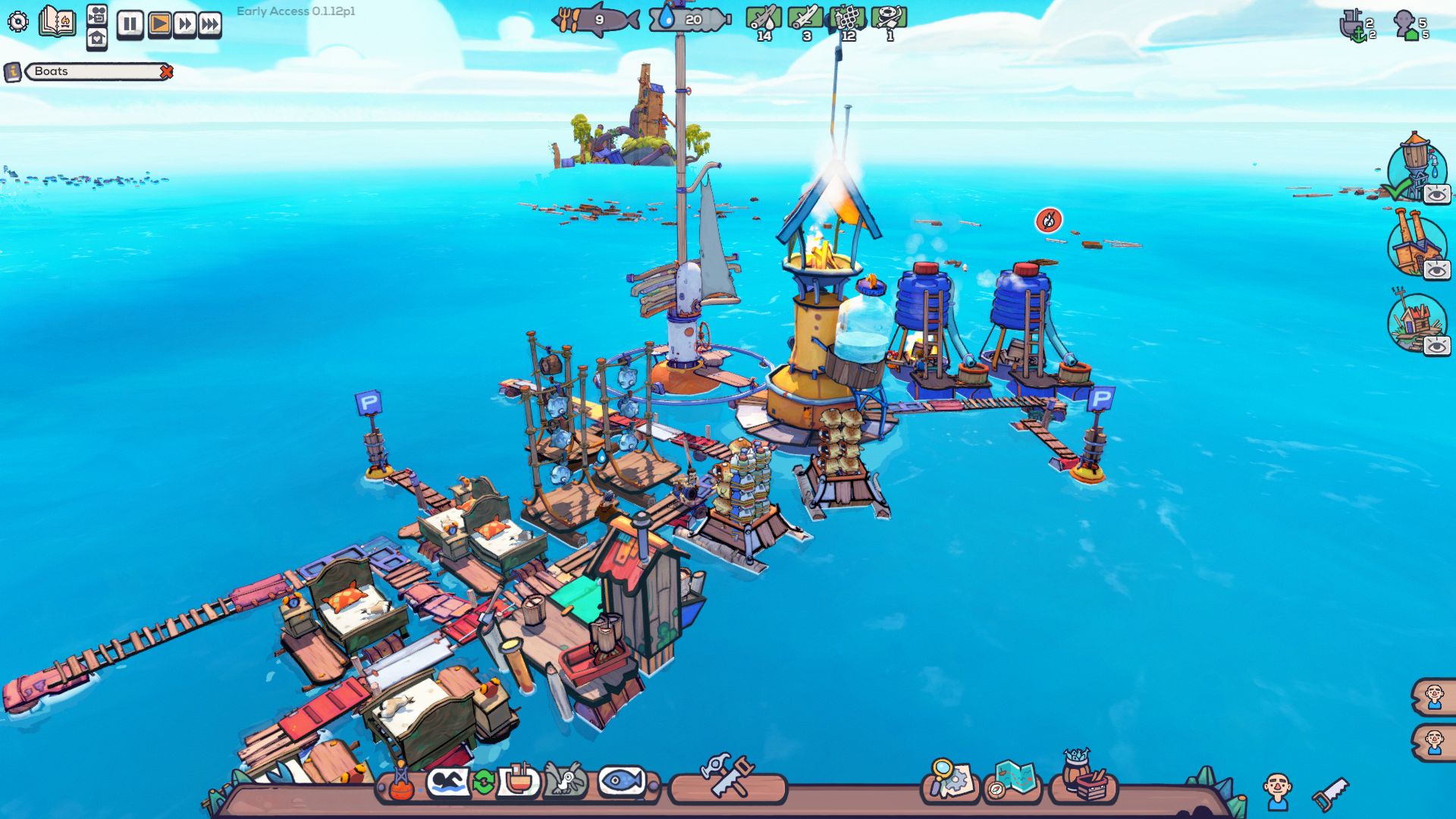 Anyway, your resources are finite in each area, being either floating wood and plastic, fish, or things you scavenge from the islands or ruins poking out of the sea. Once you've exhausted them all, you have to move on, because the Costnerians are constantly eating dried fish and drinking fresh water, the ingrates.

Like most of these games, it's an iterative process of getting slightly better at doing the things you have to do. At first you can only collect the flotsam that's within swimming distance of your town centre (your little people will leap in and out of the water with joyous abandon). Then you get enough to build a salvage boat or two, so you can reach further afield. With these, you can explore shipwrecks and abandoned towns, earning research points to unlock further, even betterer buildings. 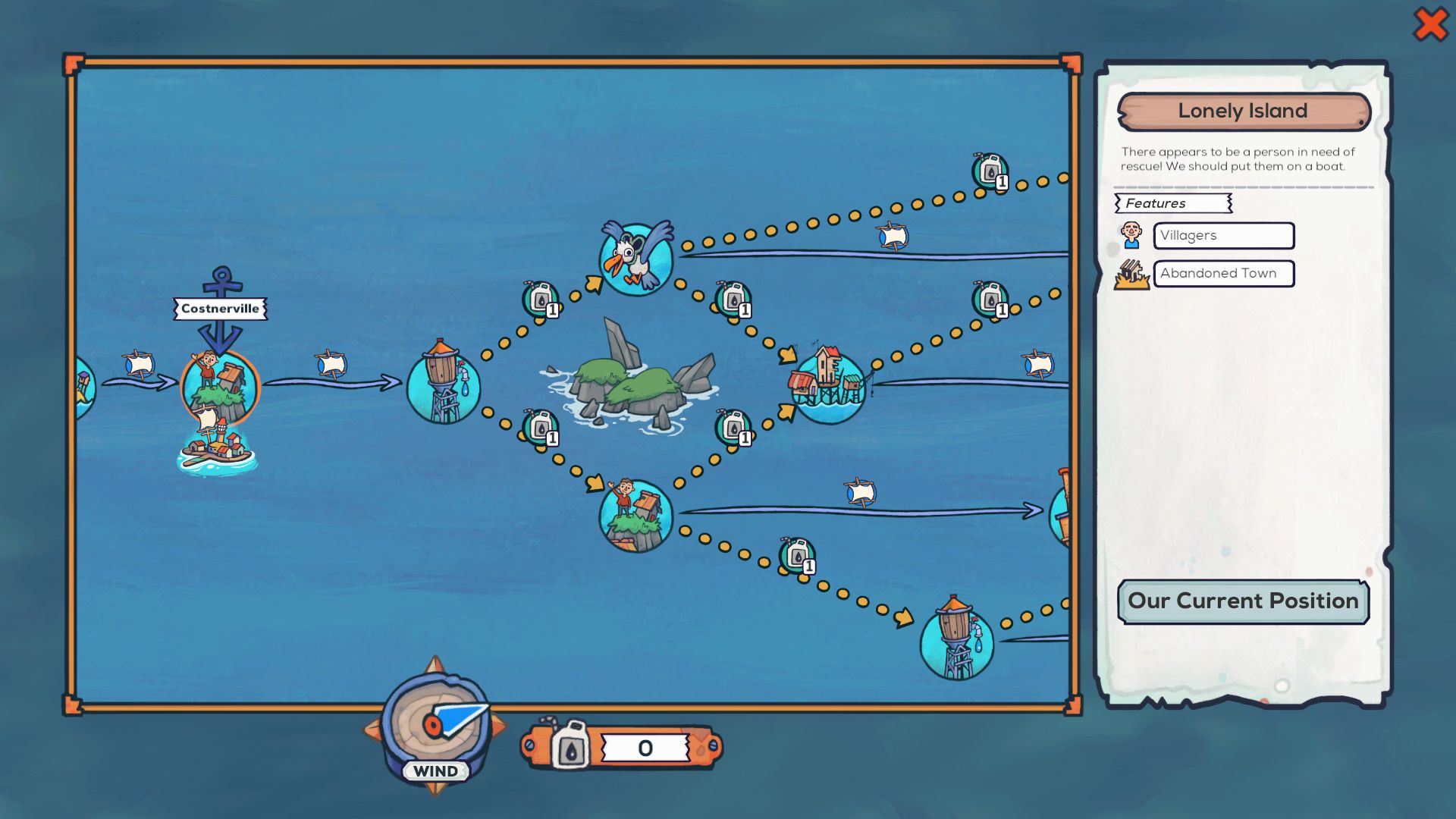 Now you can build large storage areas, so you can stockpile wet wood. You build creaking forests of drying racks to feed the workshops churning out firewood, in turn feeding the water purifiers and fish barbecues. I found it oddly evocative. I could almost imagine myself squelching around, grimly hanging up fresh fish and gradually watching them crinkle in the salty air.

It's a nice, bleak grind against an unnaturally colourful backdrop. The wide, azure water sparkling under a perfect sky, your little bastion of civilisation bobbing up and down as a vast whale flips its tail out of the water. And the entire time you're muttering ohshitohshitohshit because the last two areas you went to didn't have any shoals of fish, so you've had no food for a really long time now. You do live uncomfortably near the waterline in all senses, at least until you manage to unlock the more advanced food and water production technologies. 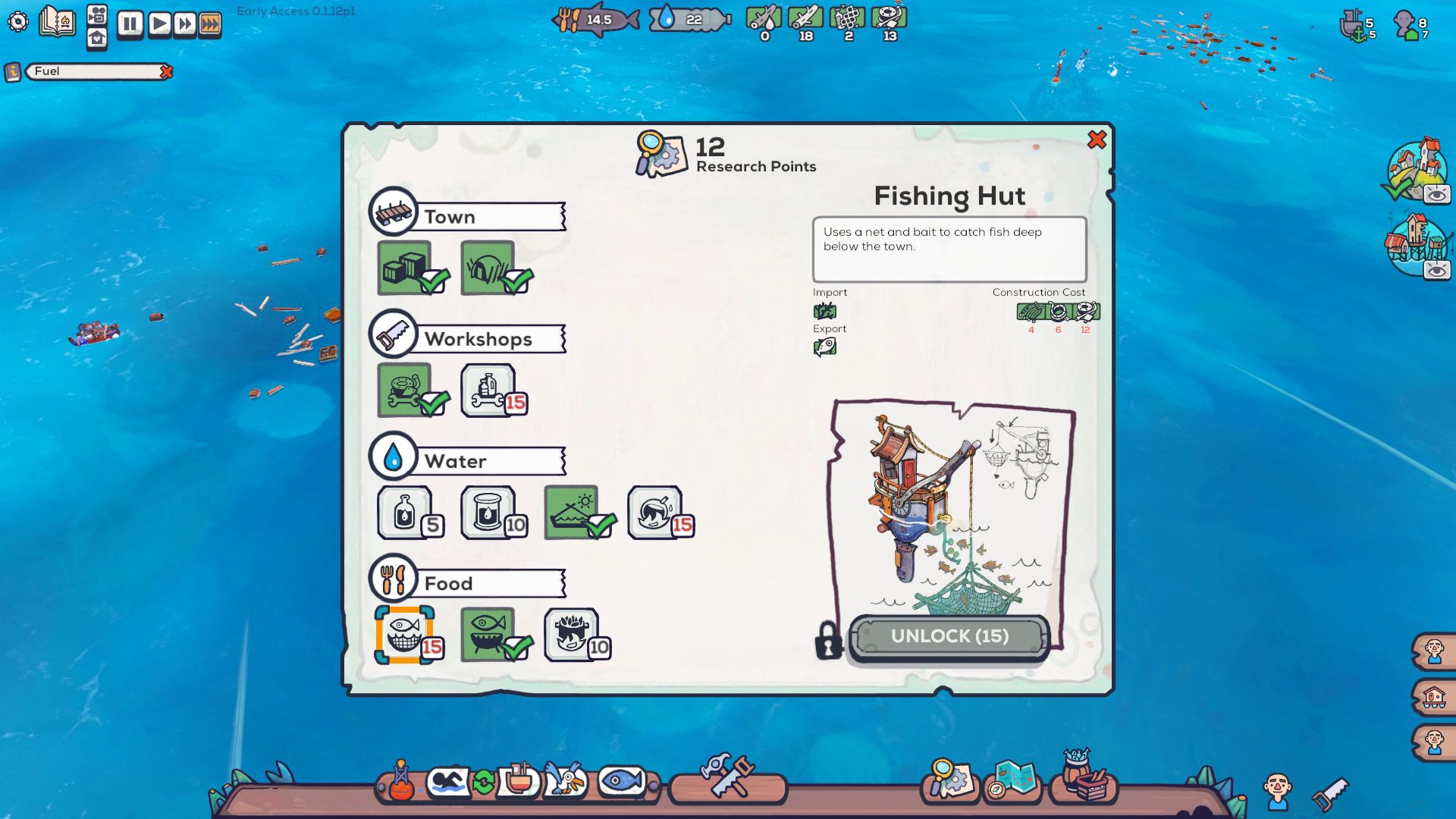 But while these bits and bobs work well, there are scant few of them right now. The R&D tree for those new technologies is almost embarrassingly restrained. You'll find that, while it's a desperate business at times, you really only have two or three production chains to keep an eye on. The Costnerians needs are depressingly few, and I'd hope that in time they're demanding to do things like get pissed on fish wine at a pub built out of old gas cans, or have a seaweed park to visit.

There also aren't objectives or the outline of a story to follow, just a repeating paddle across the same map that loops back on itself once you reach the far side. It's a bit aimless, and you'll reach the limits of what you can do in about an afternoon. And there are some little tweaks to be made, if I had my druthers. You can set an individual's priority on tasks, like "You, Fishhook McGarrity, will focus on construction" for example, but you can't work the other way around and prioritise a particular building when it's under construction, which I often find more useful.

But, much like my Costnerians looking hopefully at a leaking water tower on the horizon, you can see the potential here already. Given time it could become something very special. Like how a fresh fish can become a salted dried fish worth half a unit of food.