Playing Fortnite with a teammate changes the game a lot more than you might think. Fortnite's Duos mode introduces several new layers of strategy and complexity to the game, and you'll need to work closely and communicate clearly with your ally if you want to come out on top against all the other Duos out there.

Our Fortnite Duos guide will help you to adapt your playstyle in order to lay waste to your enemies with your teammate by your side. We'll talk about ideal positioning and communicating with your teammate, as well as deciding when to revive downed teammates or "thirst" downed enemies, and much more besides. 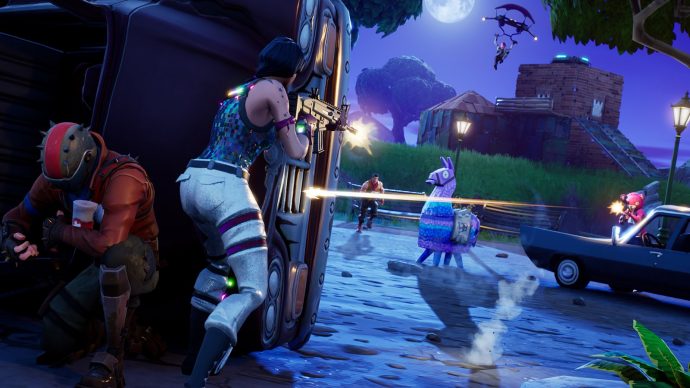 This page is just one small part of our larger Fortnite guide series, which walks you through everything you need to know to bring your Fortnite skills up to the next level. We've got in-depth and practical tips and strategies on everything from Fortnite weapons and ideal Fortnite loadouts to Fortnite building and editing and our up-to-date walkthroughs of Fortnite week 6 challenges.

The key to a successful game of Fortnite Duos is to communicate with your teammate, to stick together (but not too close), and to remember that you are fighting other duo teams and must adapt your playstyle accordingly. We'll teach you how to do all this and more in the sections below.

Your first choice will always be where to land as a duo. Unless you're both really exceptionally good Fortnite players, you should always stick close together when landing, aiming to land either on the same building or on neighbouring buildings. This will enable you to respond to threats posed to your teammate much quicker.

Most landing spots in Fortnite can accommodate more than one player, so you don't need to worry too much about your location not having enough loot for both of you. For a more in-depth look at where to land in Fortnite, check out our Fortnite locations guide.

The other important thing to remember while travelling as a duo is that you should always stick close enough together that you can respond to threats as a duo, but not so close that you become easy prey for enemies. If an enemy duo spots both of you, they're more likely to pose a threat, whereas if they see just one, they'll wonder where the teammate is, and will often act more defensively until they locate both team members.

But don't stray too far from each other; if you can't see your teammate on the minimap then you're too separated and you should both make it a priority to meet up immediately. 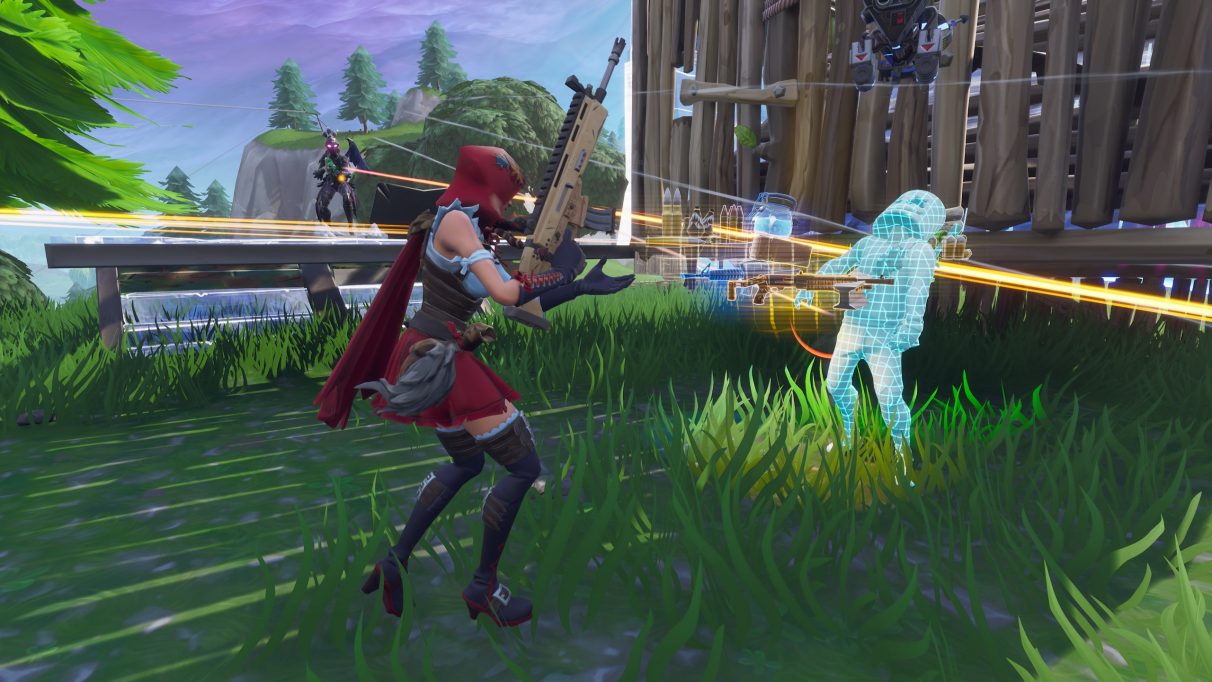 Communicate with your teammate in Duos

So what should you be communicating? The answer is everything. If you spot an enemy, even if they're not focused on you, let your teammate know (use the compass at the top of the screen to help with concisely calling out enemy positions). Also keep up to date with loot options: if you see a gold SCAR on the ground but you don't need it, tell your teammate. If you need healing, let your teammate know so they can stop too or pass you a Shield or Med-Kit if need be.

Another thing to communicate is material amounts. If you're low on a particular material then let your teammate know so they can share. I make a point when playing in Duos to do a material count every couple of minutes. The easiest way is just to call out your wood, stone, and metal in round hundreds. For example, saying "3, 4, 1" means you have ~300 wood, ~400 stone, and ~100 metal.

Pro tip for Fortnite Duos: if you both drop half of each material type on the ground (by selecting each material type in your inventory and hitting "Z"), then pick up your teammate's dropped stacks, you'll both end up with exactly equal amounts. This is an extremely useful tip specifically for Duos and Squads which can save a lot of time otherwise spent mucking around in your inventory. 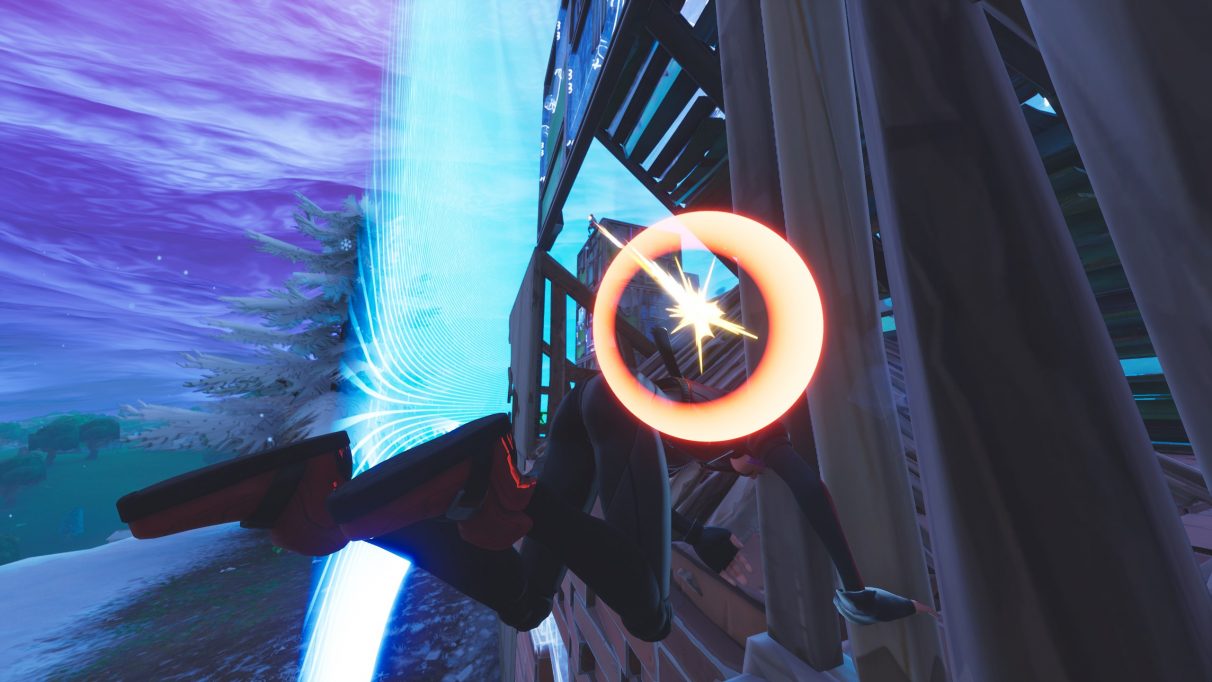 In Fortnite Duo and Squad matches, when you reach zero health you don't immediately die; instead you are "Down But Not Out" (also known as "knocked") and may still crawl around, though you can't take any other action. While knocked, you have a special health metre which starts at 100 but loses 2 health every 1.2 seconds (meaning you'll be eliminated within 60 seconds if you are not revived by your teammate).

"Thirsting" an enemy is the colloquial term Fortnite players use for eliminating a knocked enemy. The reason this is encouraged is that it prevents the enemy's teammate from reviving them later on. In the heat of battle, the decision must often be made of whether to "thirst" a downed enemy or to focus on their still-living teammate.

The answer is simple. You should always "thirst" a knocked enemy if and only if doing so does not put you in danger. If you are being threatened by the teammate in that moment, your priority should be to defend yourself, because thirsting the enemy will not help you if you're dead.

The flipside of this discussion is when to revive your own teammate if they are knocked. Again, there is an order of priority here which should always be adhered to, though doing so in the heat of the moment is easier said than done. From highest to lowest priority, this is what you should do:

Often in Duos a situation arises in a 2v2 fight where one player on each side is knocked. If your enemy tries to revive their teammate, you must decide whether to revive your own teammate or get the drop on the enemy team while they are still weak. The answer depends on your distance from one another. If the enemies are far from you then just focus on reviving your teammate. If they are very close by, it's often better to attempt to finish them off. 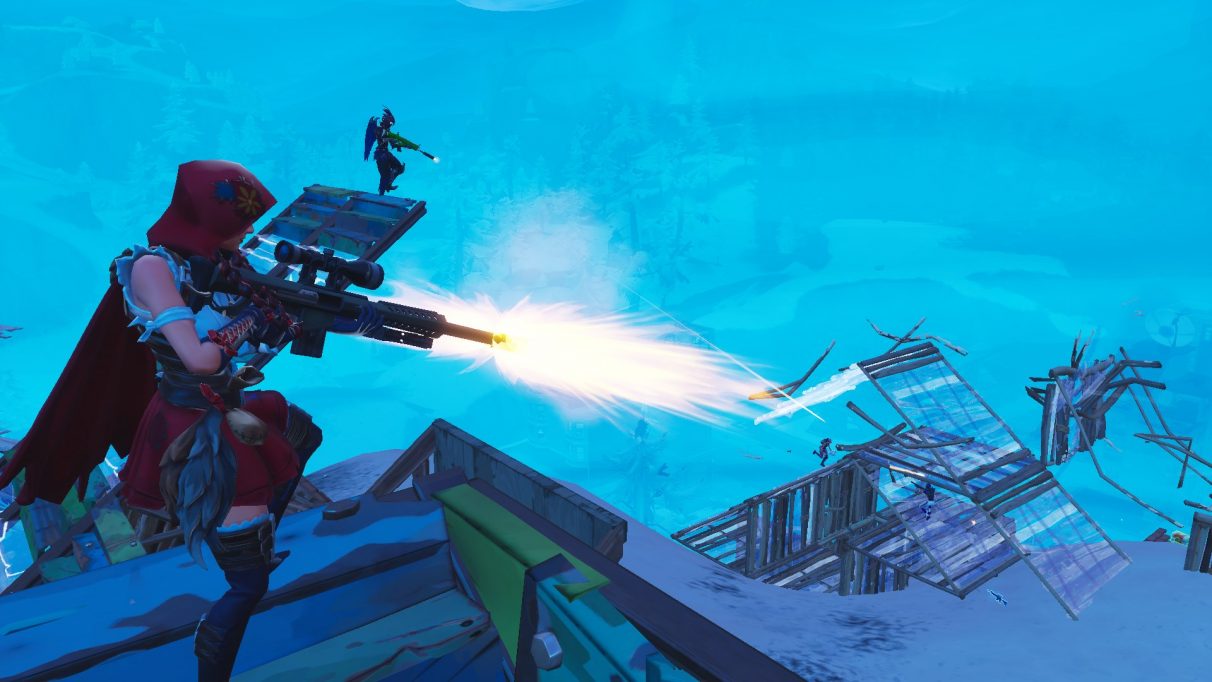 When it comes to fighting in Fortnite Duos, there are a few more subtleties than fighting a 1v1 in Solos. Again, communication is key: not only should you let your teammate know where the enemies are and what they are doing, but also what you are doing.

Examples of good things to call out to your teammate during a fight are as follows (this is obviously not an exhaustive list):

Another useful thing to know is how much damage you deal to each enemy. You can tell this by keeping track of the damage numbers which appear when you hurt them. Not only is the number important but also the colour: if it's blue then part or all of the damage you dealt was absorbed by their Shields; if the number is white, they've no Shields. So it's very useful to call out things such as "35 white", or "85 blue" when you hit an enemy, so your teammate knows how damaged they are.

When fighting in Duos, it's also useful to focus your fire on a particular enemy. However, you shouldn't do this if it frees up the other enemy to good some good hits on you. Pick your moments and sync up your fire with your teammate for maximum damage. What's more, if both enemy players focus on your teammate, then it's your job to use this moment to deliver as much damage to them as possible to disrupt them, because it could save your teammate's life. 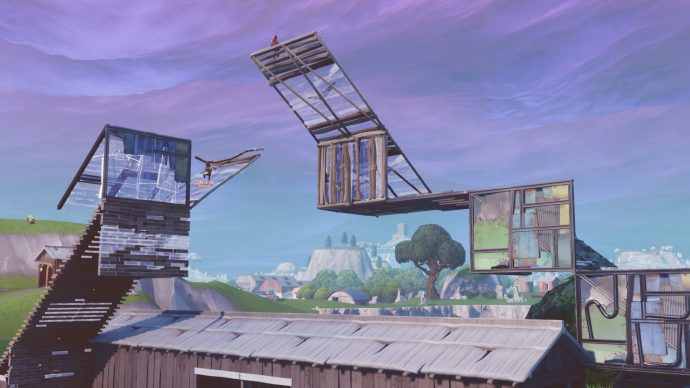 When it comes to building, there are two situations to talk about. The first is late-game 1x1s, and the second is build fighting. The first is easy, because there's only one rule: don't share the same tower as your teammate. Build a few tiles away from your teammate. Close enough to deal with threats as a team, but not so close that an enemy can topple both your towers with a single rocket or grenade.

In terms of build fights, it's a little harder to play well in Duos than Solos because you're not just having to keep track of one enemy, but two enemies and your teammate. Generally you will both end up in the same large builds but you'll pair off with a single enemy and have your own little 1v1 fights. But you should always keep track of how your teammate is doing, and if you find any opportunity to surprise your teammate's enemy from an unexpected angle without jeopardising your own 1v1, then do it, because it's opportunities like that which make or break 2v2 fights.

It's also a good idea to call out when a build is getting too high. If you think it's a better idea to drop to the ground and break a structure's foundations, you need to let your teammate know so that they can escape to the bottom before everything collapses from under them.

Those are the main points to consider when playing Fortnite as a Duo instead of on your own. As you can see, playing with a teammate against other Duos changes Fortnite in some significant ways, and you need to be ready to adapt your playstyle to suit them. But as long as you adhere to the above tips and strategies, you and your teammate will be well on your way to earning back-to-back Victory Royales in no time.