It didn't take all that long, but the Scoped Revolver is now in Fortnite's vault. It's probably for the best. But that's okay, since the rest of Fortnite's pistols occupy all ranges, all rarities, and all damage and accuracy ranges with their roster. Each one behaves very differently from the rest, so it's important to understand how all the different pistols in Fortnite can - and should - be used during a match.

While you're here, we should also bring your attention to our main Fortnite guide, which provides a detailed overview of the game in addition to links to all our other Fortnite guides, from Fortnite week 6 challenges to our breakdown of all the different Fortnite locations, and much more.

Our Fortnite Pistols guide is packed with tips on which situations each type of pistol excels or falls short, as well as numerous pointers and strategies on how to use them with confidence and to great effect. It doesn't matter if you've got a Hand Cannon, or the Dual Pistols. Take a look below and you'll find out everything you need to know to start racking up those pistol eliminations.

Pistols come in all sorts of shapes and sizes, and each of them has at least one - and more often several - unique characteristics. So it's tricky to talk about them as a whole. But before we dive into each individual type of pistol, there are a couple of things to mention.

First: don't assume that pistols should be discarded the moment you come across another class of weapon. Many pistols are in fact far more fearsome than many players give them credit for, so it's worth your while to go into Creative Mode and experiment with them for a while, then take them into a real match and see how you fare.

Second: don't go too far the other way, and assume that pistols are all you need. Most of them are excellent backup weapons, but you should always be prepared to switch at a moment's notice to whatever weapon will work best for you in that moment. See the below gif for an example I threw together of using the Hand Cannon just once before switching immediately to another weapon.


Pistol eliminations at any range


Your pistol of choice should depend on the other weapons on your hotbar. If you've got, for example, an Assault Rifle, Shotgun, and SMG, then you're good for close-range and you'll probably want something long-range like a Hand Cannon rather than some Dual Pistols.

Alternatively, if you've just the one close-range main weapon, Dual Pistols might be a better option for you than a Suppressed Pistol. Or if you haven't got a silenced weapon yet for taking out the Ice Legion or other players without attracting attention, you might want to opt for the Suppressed Pistol. The point is that you need to read your current weapon loadout in order to figure out which pistol is best for you at any given time.

For tonnes more information on how to perfect your weapon loadout and combinations, take a look at our Fortnite loadouts guide. 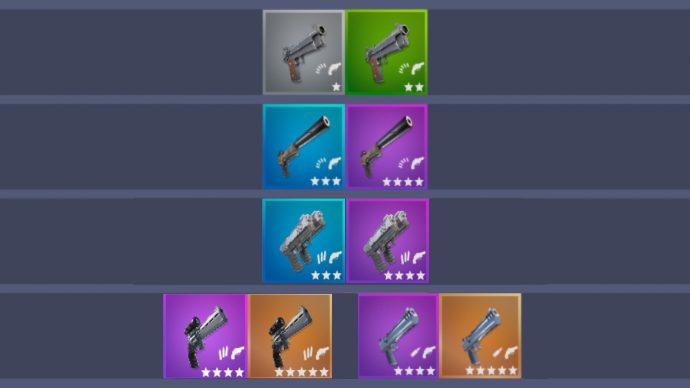 Now let's get stuck into figuring out when each type of pistol should be used, and the pros and cons of each. If you want hard stats on each of the weapons, check out our Fortnite weapons guide, while below we go into a little more detail about using each of these weapons effectively.

Returned from the Vault in V7.10, Dual Pistols are the kings of close quarters combat when it comes to pistols. Fast-firing, a generous clip size to make up for a few missed shots, and damage enough to kill a player in the early game surprisingly quickly, especially if you headshot with them. You should treat Dual Pistols as a two-shot burst weapon, so these pistols reward accuracy with massive damage - up to 176 damage in a single pull of the trigger, in fact.

Of course, they don't have first-shot accuracy, and the bloom, while not uncontrollable, is not the best. So using Dual Pistols at medium range can lead to some disappointment, and hitting a target at long range is a distant dream. But for close-quarters combat in the early-game before you've a decent shotgun and/or SMG, the Dual Pistols are your friend. Mostly because nobody expects them to be able to deal damage equivalent to a Heavy Shotgun blast.

Despite their nerfing in the V7.40 Patch Notes, Hand Cannons are still on top of the world right now. Available in Epic and Legendary varieties, the Hand Cannon combines painful damage with first-shot accuracy and hitscan (no bullet travel time). In the hands of a player who can accurately shoot at medium or long range without a scope, the Hand Cannon can end a fight before it begins with a maximum damage of 156 per shot.

Though the Hand Cannon's immense structure damage was nerfed so that it could no longer one-shot wooden structures, it can still two-shot wood and make short work of most other structures with its 100/105 environmental damage per shot. This utility makes it a very versatile weapon during build fights for disrupting your opponent and dealing massive damage while outside of shotgun range.

Available in Rare and Epic colours, the Suppressed Pistol is a surprisingly versatile pistol, but not one that'll wow you like a Hand Cannon or Dual Pistols. Its fast rate of fire makes it decent against close-range enemies if you've no better weapon to use, but you'll need to aim for the head in order to out-DPS an SMG or Shotgun.

Still, it's a useful backup weapon due to its first-shot accuracy and its silencer, which renders it inaudible for anyone more than 45 metres away. This is particularly useful in the current state of Fortnite, now that the Ice King has released the Ice Legion of shield-giving, fun-destroying zombies upon the Fortnite map. The best way to deal with these Ice Shards and their spawn is silently.

The bogstandard Pistols are the worst of the bunch, but they can still save your life if you land all your shots. Available in Common and Uncommon varieties and dealing the worst damage of any pistol, it takes five body shots to deal 100 points of damage to an enemy. Which sucks. The good news is that you can shoot fairly quickly, and if you land all your shots, you can walk out of a bad situation with most of your organs still intact.

The bloom spirals out of control very quickly with this pistol, but equally it returns to first-shot accuracy very swiftly, so if you're at mid- to long-range you should hesitate a little between every shot, rather than spraying wildly at your target. But while it can be used to semi-decent effect at pretty much any range, there isn't a single gun in Fortnite that I would hesitate to replace the Pistol with. 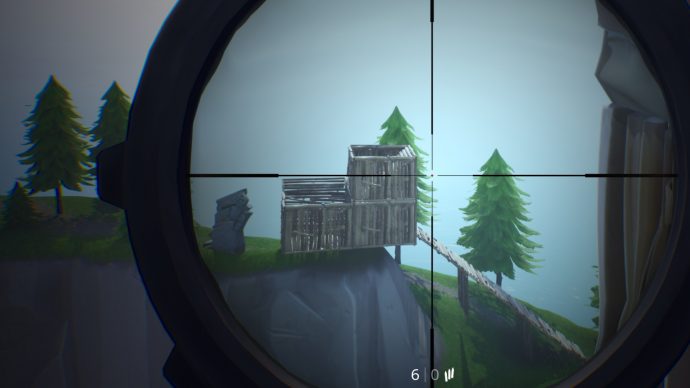 Now we've sorted through the different types of pistols available to you throughout a Fortnite match, let's finish with some practical tips and tactics on how to perfect your pistol skills and earn some rage-inducing pistol eliminations along the way.

And with that, we wrap up our Fortnite Pistols guide. Hopefully you've learned a thing or two about the different pistols and their strengths and weaknesses, and we've done our bit to spread the word that pistols can be used to just as great an effect as any other class of weapon, given some practice. Keep checking back here for all the latest and most practical tactics and tips on pistols in Fortnite.