You might want to duck and cover if you're playing Fortnite: Battle Royale tomorrow, Saturday at 1:30pm EST (6:30pm BST for us UK folks). Epic have been teasing some manner of big in-game event to tie up its current superhero-themed season and it probably involves big, very dangerous looking rockets.

A countdown displayed on TV screens throughout the battle royale shooter's world suggests that it's going down tomorrow afternoon. According to a pop-up warning in the game itself, this will be a one-time live event, so be there or be square (and watching it on YouTube afterwards).

The world of Fortnite hasn't stayed static in the run-up to this event. Among the changes introduced to the map this season (including Dusty Depot getting obliterated by a giant space-rock) is the addition of a supervillain's lair replete with missile silo. Within is a large rocket with a big purple warhead (ooerr) of some description, which, unattended, seems like an accident waiting to happen. It seems that there's been some test-launches going on over the past couple days, with a launch siren heard in the clip below, caught by streamer OpTic CouRage:

A rocket was also found crashed in a field by streamer SXVXN. Our intrepid Fortnite correspondent Alice Prime went and visited the crash site, only to find the rocket missing, and an ominous truck parked nearby. 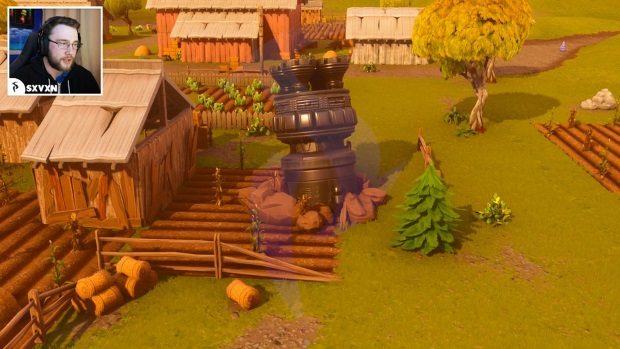 She did at least manage to secure some pictures of the missile silo before being brutally murdered by some howling loon with a pickaxe. Evil henchman or just regular player in a battle royale shooter? We will never know for sure, but odds are good on the latter. Here's a glimpse at the missile silo itself, ready to launch and wreak havoc upon the peaceful and serene lands of... No, wait, that's some other game. Will anyone even notice anything out of the ordinary if a bloody great missile fell out of the sky?

She also snapped a picture of one of the TVs ticking down the seconds. Spooky stuff.

While I wouldn't put any money on my own wild conjecture (I'm seldom right about these things), my gut feeling is that this has something to do with Fortnite's Save The World co-op mode. If the world needs to be saved, it needs to be plunged into peril first, and a nefarious villain launching missiles filled with sketchy purple stuff (the same shade as Save The World's mutant monsters) sounds like it'd do.

Outside of dramatic countdowns, Epic have also announced that they're replacing their unpopular Final Fight time-limited playmode (which Alice assures me was genuinely rubbish) with the fan-favourite 50 v 50 mega-team rumble with an akimbo pistol twist. Dual pistols and bounce pads spawn at twice the normal rate, and everything gives 50% more resources than usual. Sounds like a grand old gunslinging time to me.

So, are you going to be on ground zero for this one? Ready to bathe in the fallout, or taking a rain check on this one? Everyone and their dog seems to have some kind of theory - what's yours?