Mr. America, Robin Hood, Pistolera, Tinhead Ned, Norseman and the rest of the gang return to cinemas today in Avengers: Endgame, and the movie is smashing into Fortnite too. Epic Games today launched their 'Fortnite X Avengers: Endgame' crossover with a special event mode where goodies try to thwart Thanos and his superspacepals. Each side also gets to power up by scavenging for Avengers' weapons (e.g. Tinhead's zaphands, Norseman's zaphammer) or Infinity Stones. It's a bit grander than the Fortnite event for Infinity War last year. I don't understand why a kids' game is crossing over with a serious adult movie but hey.

Right so two teams of 20 players, Heroes and Team Thanos, are trying to wipe each other out. Heroes can find Avengers' weapons to spaff lightning, hover with zaphands, and so on. The goodies respawn without limit, and are trying to grind through the 100 respawn tickets of the baddies to win.

The baddies are trying to grab Infinity Stones. Every baddie starts as a Chitauri warrior with a jetpack, laser rifle, and a building-trashing laser cannon. When Infinity Stones start spawning around the safe zone, grabbing the first will cause one player to become Thanos with mighty powers to punch hard, blast a zapbeam, leap high, and slam down megahard. If Thanos dies, he'll come back after a short break. Each subsequent stone powers up Thanos and toughens up the Chitauri, then when they have all six the heroes stop respawning and can be whittled down.

So the two teams are trying to secure the clearly-marked Infinity Stone spawn points, and the goodies are grinding down the baddies' respawns while the baddies grow stronger and stronger. It's chaotic, of course, but the asymmetry is interesting and I want to play more to get a better sense of it. 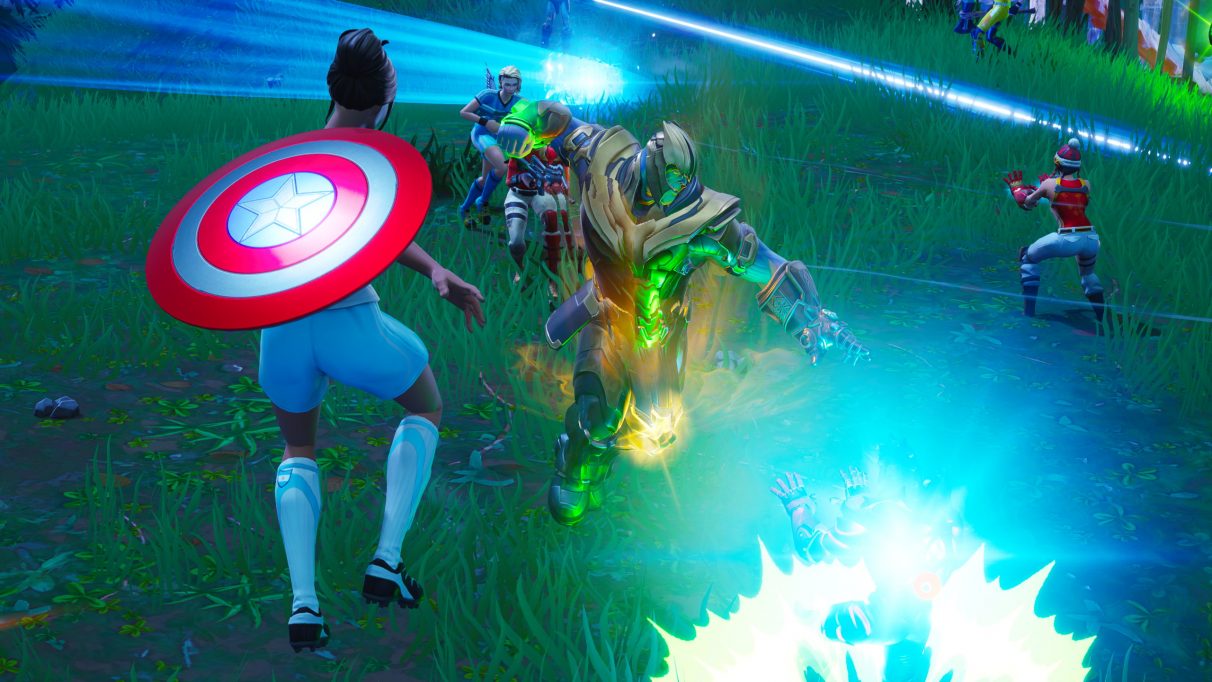 It's a fair bit more elaborate than last year's Infinity War event, a free-for-all where one player was Thanos and everyone else was gunning to take them down and claim his spacemitten to become Thanos themselves.

This event also brings new challenges to unlock Avengers-themed sprays, emoticons, a Quinjet glider, and so on.

Hey, remember that report about how Epic Games employees are supposedly suffering hellish amounts of overtime to satisfy desire for constant updates? A whole lot of work must have gone into this one.

It looks like the event will run for 11 days, judging by how long the Avengers challenges are available for. See the Fortnite v8.50 patch notes for more on how the mode works, plus other changes. Fortnite Battle Royale is free-to-play on Epic's client.