Make love, not war, or at least repurpose the wreckage of failed mech-war into a charmingly smoochable partner for a lonely rampaging monster. Kaiju Super Datetech is a cute little free game from Powerhoof (makers of Regular Human Basketball and arcade hack n' slasher Crawl) for up to four local players plus party pals, working together or in teams to build NotGodzilla a date. Players control little office workers, hopping around, carrying bits of robot and scaffolding and bolting new gubbins on as you race across the scrap-heap wastelands to to meet your tall, dark and scaly partner.

While I've only had a chance to play this solo - which is fun by itself and good for practice - it's clear Kaiju Super Datetech is built for multiplayer. In the split-screen competitive mode, each team can see their rivals silhouetted in the background, and given that you get a score bonus for being early to your date, it could become a frenzied race. You've got to attach wheels and rocket boosters to bits of chassis in order to get your smoochbot rolling, but also find time to attach arms, heads, and stylish accessories like hats and sunglasses. NotGodzilla isn't shallow, but likes it when you make the effort. 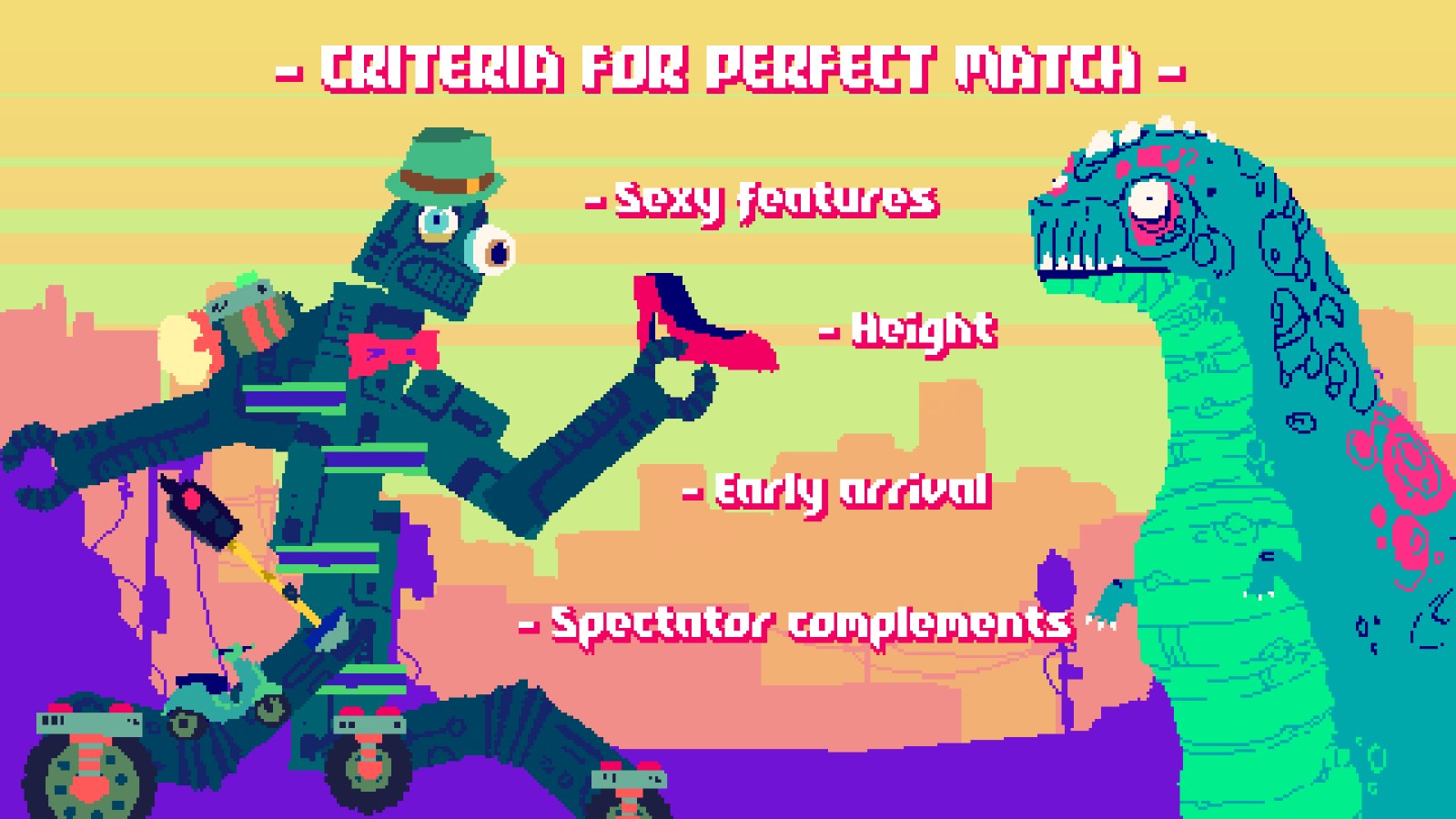 The similarities are clear between this and Powerhoof's earlier Regular Human Basketball, but this is a simpler, easier proposition. Your'e not trying to do anything as wild as play sports in your wobbling, ungainly junk-bots, just attempting to get from A to B while bolting extra stuff on and appealing to NotGodzilla's tastes. There's some small planning required in where you put your wheels and where you put platforms to allow access to the upper parts of the rolling robot, but mostly it's just a mad scramble to build up high without toppling over. Grab some friends, some gamepads, and smell the romance (and atomic ashes) in the air tonight.

Kaiju Super Datetech is free (although with the option to leave a tip if you like it) over on Itch here. If you've got more than four players, there's a Jackbox-styled party mode where spectators can tune in on the their smartphones and complement your stylish robots for extra points. NotGodzilla is a lizard about town, and appreciates a good reputation.