I always think of Brutalism, a style that boomed primarily in the 50s and 60s, as competitive architecture - not as in architect vs. architect, but as in building vs. every other building around it. Brutalist structures look like everything else has spilled their pint. They’re big, thick blocks of raw concrete that have a looming presence no matter how large they actually are, and are cold to the touch even on warm days. Lots of tower blocks and car parks can be described as brutalist, and so can a lot of university buildings, and the National Theatre.

You either love or instantly hate Brutalism. It’s deliberately, aggressively functional, and the buildings often look uncomfortable. Personally I always liked Brutalism because it manages to look retro and future dystopian at the same time. It had not occurred to me to be afraid of Brutalism.

Fugue In Void is a walking simulator by Moshe Linke, who has made a lot of games about Brutalism - although this is the first of them I’ve played. The blurb says “Explore all kinds of mysterious places and dive into a world full of atmosphere. Let this experience unfold in your head. Let it inspire you,” and further describes Fugue In Void as “the perfect break from all those action packed games out there.

It does not say “You will break out into a cold sweat in a busy office. You will experience a spike in anxiety and an elevated heart rate, and get the distinct impression that you are being chased.”

Excerpts of my notes from playing read like a really overwritten piece of environmental storytelling from a different, worse game:

this is a fucking horror movie

the fucking building is alive 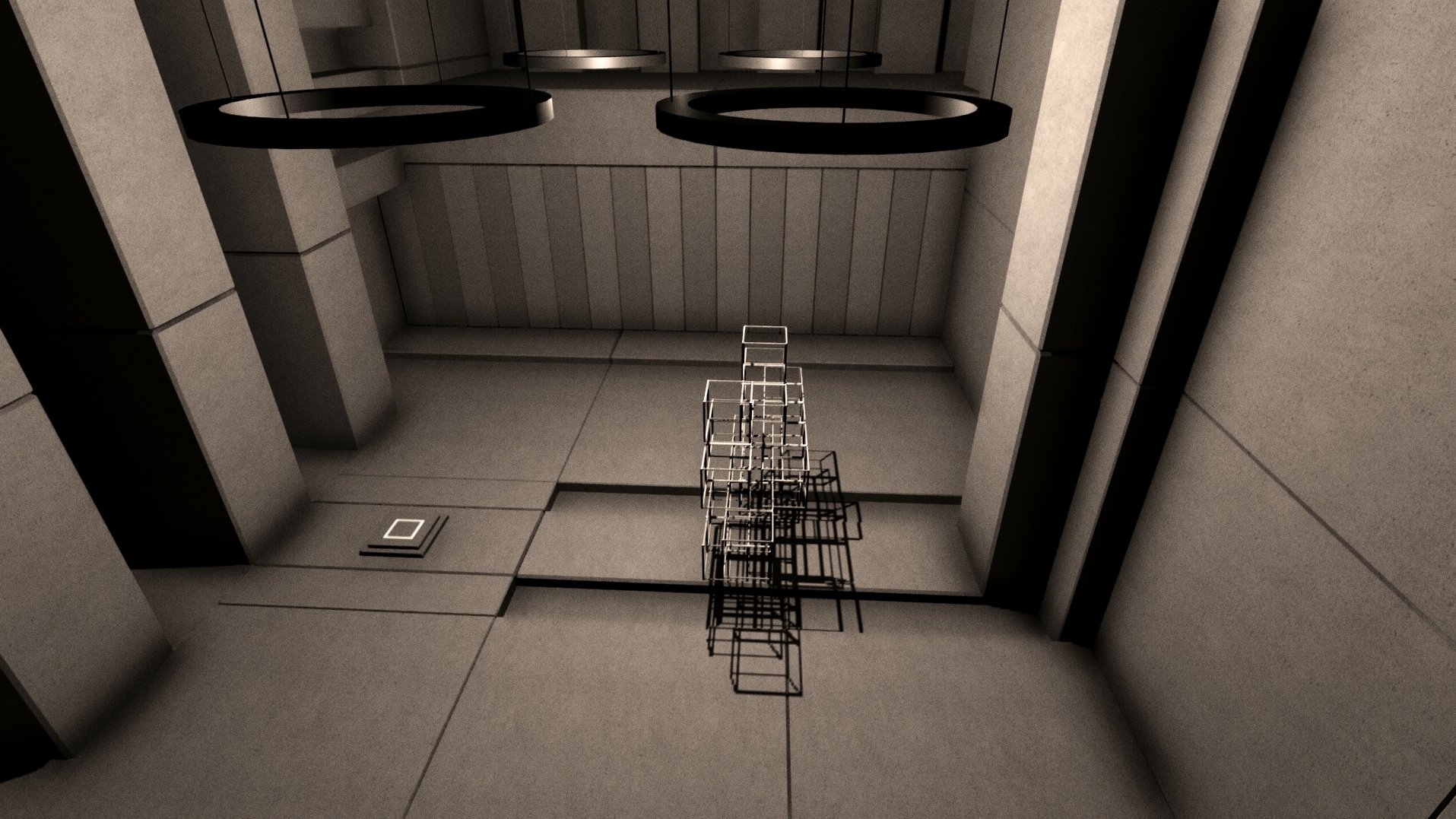 Fugue In Void takes about 45 minutes to play, and for the first ten of those you can’t do anything, except watch helplessly as some kind of something far off in the distance moves extremely slowly towards you. Eventually, control is give to you, standing on a white concrete bridge in an underground sea. The only way to go is forwards. You can’t see a horizon or an end to the vast expanse of water. It’s too dark. There are lights flashing above you, and a tide with no discernable source continually pulses, like being inside a salty, mechanical heart. Eventually you make it inside an unnervingly huge grey building, with high ceilings but thin corridors. And you explore many buildings and rooms like it, some with sounds or lights or spinning sculptures. Clearly terrifying, am I right? I’m right.

Fugue in Void removes control from you again at several points - taking away your ability to jump or walk, whilst you’re trapped on the inside of a sphere full of spikes. At one point it switches things around so that you can’t walk forwards. You’re only able to move in reverse towards a huge building, which is squatting with what I took to be malicious intent in the middle of a wide desert. It often plays with perspective, cutting to new environments with your camera orientated to a weird starting position, or using light and shadow to dramatically change how a room looks. The main interaction you have with the environment, besides cowering in terror, is pressing buttons to make doors or walls open. 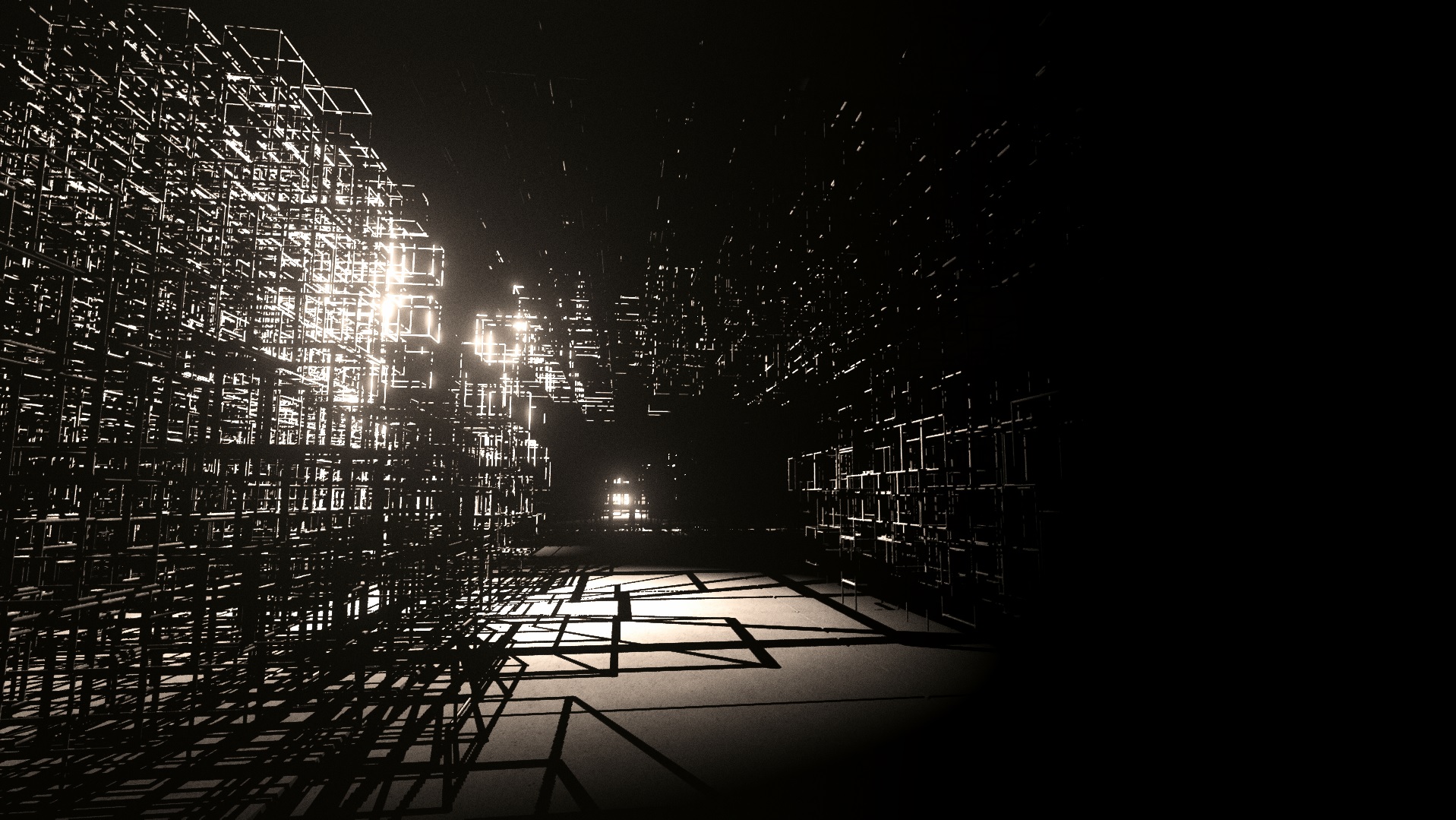 Fugue In Void is not, to be clear, a bad game. It’s beautifully made, and almost every screenshot you take from it would serve as inspiration for a bleak post-apocalyptic or science fiction novel. But it also scared exactly one hundred percent of the piss and vinegar out of me. While I think it was definitely made to be a bit sinister, I’m not sure it’s meant to be as pants-wettingly frightening as I found it - unlike, I feel, Tonight You Die, another game featuring Brutalist architecture (Alice O. suggested Tonight You Die, and it’s steeped in a horrible sense of foreboding and inevitability). Dave, meanwhile, also played Fugue In Void and said, and I quote, “scariest thing to me is that it made me paranoid at how dirty my screen was.”

Aside from the music and the claustrophobic buildings, I think the fact that playing it was such a gentle experience in terms of the input required of me was the key part, here. It meant that my head was able to freewheel through horrible associations. The dark, subterranean ocean at the start, for example, called up a really specific and horrifying nightmare my big brother told me about, wherein you’re trapped forever in an underground lake with exactly one (1) whale. The spinning sculpture reminded me of the grim hell-and-sci-fi strangeness of 90s horror film Event Horizon. The desert instantly made me think of the giant sandworms in Dune, which are - and I will take no argument here - terrifying at first concept. 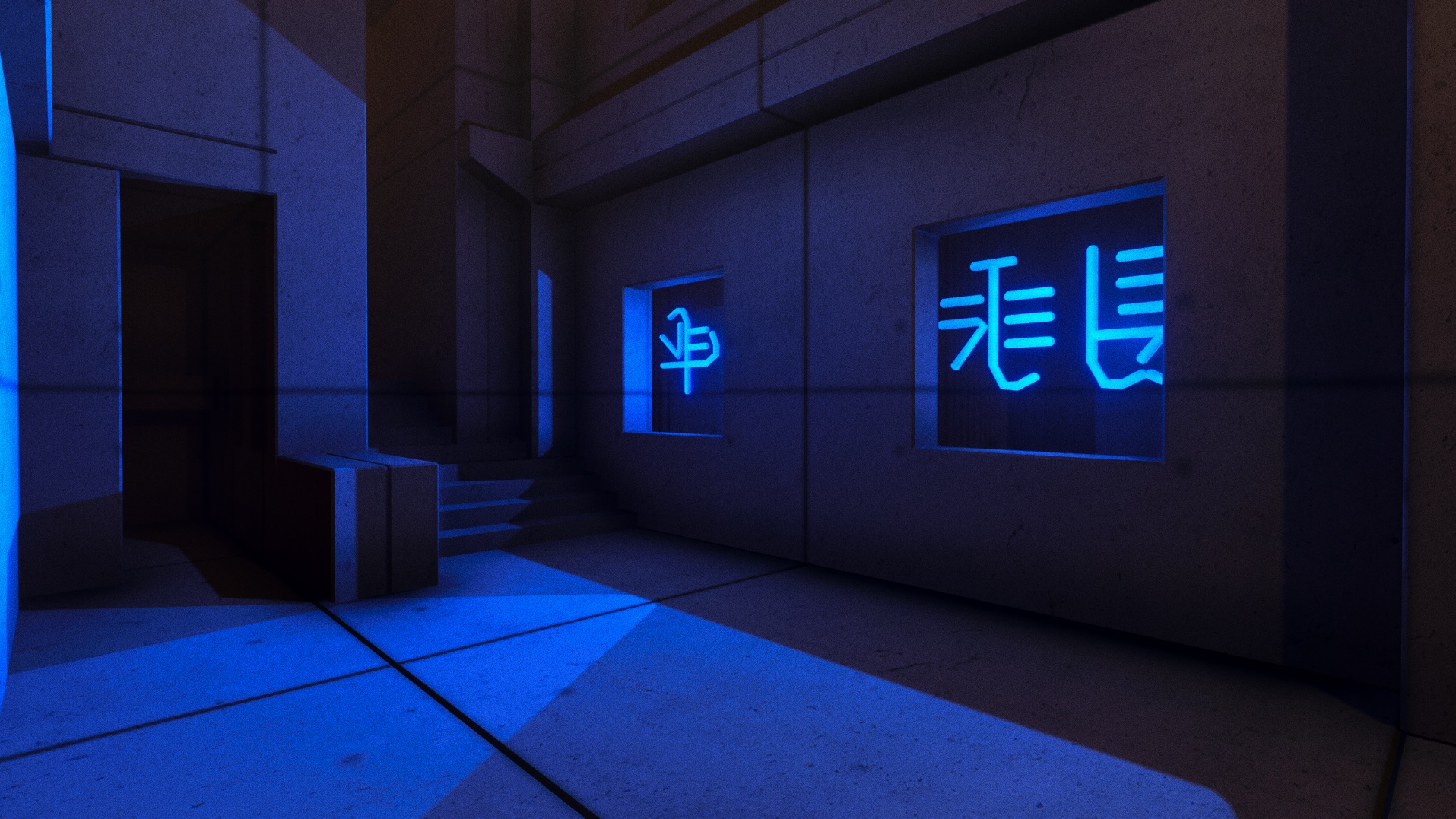 This game made me feel like I was constantly being followed even though I was alone, and I often ran through the levels in a panic as a result. The environments in it are often highly symmetrical so I was afraid of getting lost in them, like when you take the wrong turning in the identical hallways of a giant hotel, and suddenly you think you’re in The Shining. The tightness of the the staircases and corridors made me feel like they were narrowing around me, and I was going to be trapped in rock like in The Enigma of Amigara Fault.

Fugue In Void was 45 solid minutes of wrecking my shit but, paradoxically, a 45 minutes that I would recommend to others. I’m not entirely sure if Moshe Linke loves Brutalism or hates it or is afraid of it, but now I am afraid.

I am afraid of Fugue In Void.

I am afraid that I will go to sleep and wake up, alone, in vast halls of silent concrete.