Transforming the ordinary into the fantastical. It’s a tenet of Magical Realist fiction, Brechtian theatre, staring too long at your hands while on edibles, and now Grounded, a new survival RPG from Obsidian. It features four plucky teens, a shrink-ray experiment and a mundane back garden transformed into a vast, dangerous, colorful wilderness. Gnats are now the size of your face. You can build trampolines from spider webs, or armour from acorns. Part Honey, I Shrunk The Kids and part Ark: Survival Evolved, Grounded is a game brave enough to ask, "What if those tiny cartons of fruit juice with the sippy straws that America calls ‘juice boxes’ were like, absolutely massive?"

I recently watched a short presentation at Obsidian HQ and got a chance to chat with Grounded’s director, Adam Brennecke. Typical to the storied studio, there’s very few aspects of Grounded that haven’t been approached with a world-builder’s eye for detail and place. Even with Obsidian keeping some big story and setting reveals close to their chest, there’s a lot to get through.

Broadly, Grounded is a four player co-operative survival RPG where you play as one of four teenagers. First or third-person is up to you. It plans to launch in early access in spring 2020, simultaneously on both Steam and Xbox Game Pass for Windows. (This is the first new game announced by Obsidian since they were acquired by Microsoft earlier this year.) As the game starts, the starring teens are shrunk down to the size of ants in a mysterious experiment. Your job, then, is to survive in a huge garden teeming with hundreds of insects, big packs of mints, and busted sprinklers re-framed as gargantuan waterfalls.

Let’s talk about those insects first, because they’re very big and I wouldn’t want to upset them. Weevils, gnats, spiders, ants, bees, ladybirds, and aphids all either made an appearance in the gameplay presentation or were confirmed outside of it, and I’d guess there’s more to come. In lieu of traditional Obsidian choice and consequence (“You won’t find a dialogue tree,” says Brennecke), players make their mark on the world by poking their human calamity-fingers into things and seeing what effects their actions have on the mandibled denizens of gardenland. Influencing ecosystems, rather than story beats, seems like the name of the game.

Brennecke describes the project’s four design pillars as crafting, base building, combat, and exploration. So far, so survival genre, and in keeping with theme, you also have to keep your character fed. A discarded juice box or some mushrooms might satiate for a while, but sooner or later, you’ll need a go hunting. You get your stick/rock spear combo and spy a tasty Aphid moseying across yonder leaf. Aphids are easy prey, but they’re also favoured by ladybirds, so eating too many might run you afoul of the bespeckled beetles, or it might even force them to find a new hunting ground, should you snarf up all the local delicacies.

But maybe you leave a freshly hunted aphid lying around, and a scout ant comes sniffing? Grounded’s ants operate in colonies, and should the scouts find something interesting - food, for example, or, uh, you - they’ll leave a trail of pheromones for other ants to follow. At the start of the game, you might not seem all that interesting. As you collectively build your way up a co-op tech tree, and start to construct bigger and more advanced bases, you could well draw the ire of a platoon of soldier ants.

Here are some more cool insect facts I learned. Spiders sleep in the day portion of the day-night cycle (a fine, sensible cycle, say I.) You can make fluffy hats out of gnat carcass. Weevils will lead you to food if you follow them. Bees hunt for pollen. You cannot, as yet, pet the gnats, although after some prodding, Brennecke did mention they’d love to develop some sort of insect taming, befriending, and riding features while the game trundles through its early access development.

Obsidian were keeping mostly silent about the characters. The phrases ‘typical teen’ and ‘grumpy, but with a heart of gold’ were used, with what I generously assume given Obsidian’s usual attention to character was a healthy dose of irony, although it could well be that the player avatars really aren’t the focus here. Each of the four teens (two boys, two girls) are cosmetically different, though apparently functionally identical. There’s no set roles, classes, or experience points, with character differentiation arising through a co-operative tech tree. There may well be more to come, as the game’s story was the one area I was told the least about. For now though, calling the teens ‘avatars’ seems more fitting than ‘characters’. 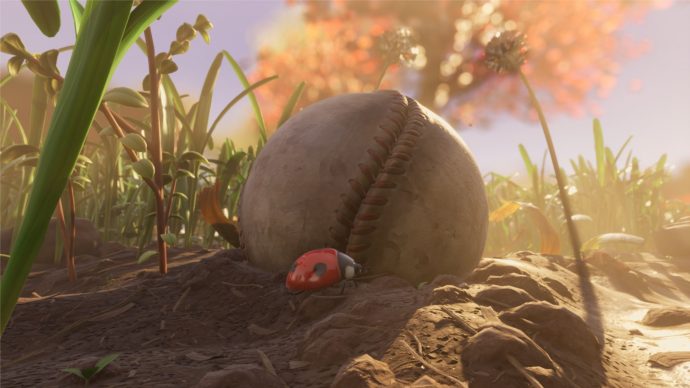 Mate, it is a very nice garden, though. A huge oak tree, resplendent with an autumnal crown of auburn leaves acts as a central focus, towering above the rest of the garden. Discarded sweet wrappers and other rubbish become colorful landmarks. Even the insects themselves are drawn with an eye towards realism but stylistically slanted - gnats, for example, are genuinely adorable - making everything pop with a slight fantasy sheen. It’s these splashes of colour and warmth in a traditionally necessarily grim and demanding genre that has me the most excited to check out Grounded. Brennecke mentioned difficulty settings comparable to other titles, so it sounds like those of us that want to explore without too much meter nagging will have that option.

This isn’t to say there won’t be a challenge for those who want it, though. As mentioned previously, the higher your party climbs up the tech tree, and the snazzier your home base gets, the more attention you’ll attract from your antennae-toting neighbours. This means you’ll want to not only make sure you’ve got a solid set of walls, but also axes, spears, some decent armour, and traps, all of which and more can be crafted from both the natural world and man-made debris, assuming you’ve got the corresponding tech.

Difficulty is also affected by exploration, and the open world is divided into different biomes, accessible through metroidvania-like progress that the team refer to as “crafting to traverse”. Niftily enough, it seems like a lot of thought has been put into the reasoning behind yer more conveniently ‘gamey’ hazards. A flooded area is the fault of a leaky sprinkler, for example, while a later biome known as “The Haze” is due to a cloud of weedkiller. You can go there, eventually, but you’ll need to craft a gasmask first.

This is all tied up in what I can definitely say is some sort of a main story, providing you have no follow-up questions, because again, Obsidian weren’t saying much. They did say some things, though. I’ve handily arranged these things below, in a section I like to call “I see, you, fellow cynic.” 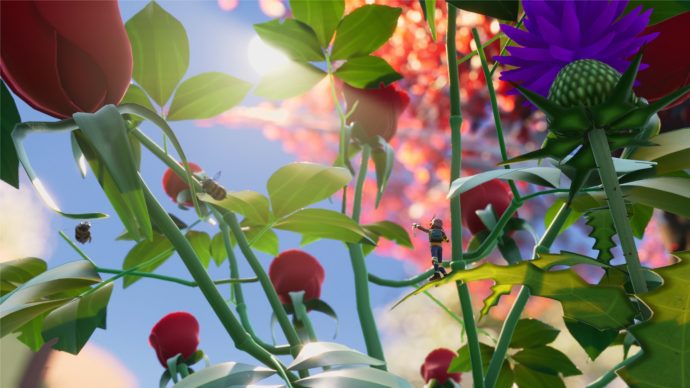 Grounded has been in development since way before the Microsoft acquisition, and, according to Brennecke, it’s something he and the team have been excited about making for a long while now. Survival, as a concept, blossomed into a more popular genre while the team were working on Pillars of Eternity: Deadfire. Once the ship-faring role-playing game was shipshape and shipped, Brennecke sat down with fellow Deadfire developer Bobby Null and a five hour brainstorming session resulted in the go-ahead from studio lead Feargus Urquhart to develop the prototype which eventually became Grounded.

“We created a big backstory. Who created these (shrinking) machines? Why are you here? Who is leading this experiment?.”

The central conceit has also, Brennecke says, allowed everyone on the team to contribute to design. Despite the sci-fi slant, it’s still nature, so something as simple as a morning dog walk can result in more ideas to bring to the table. This grounded approach seems to have been a key concern during development, resulting in the sort of textural reactivity players might expect from an immersive sim.

I'm given the example of the trampolines the player can craft from spider’s webs. They can be used to reach higher ground, sure, but you can also use them to bounce objects across large distances. I am not entirely sure why you want to do this, but hey, sometimes bouncing objects off a trampoline made from spider’s webs is its own reward. 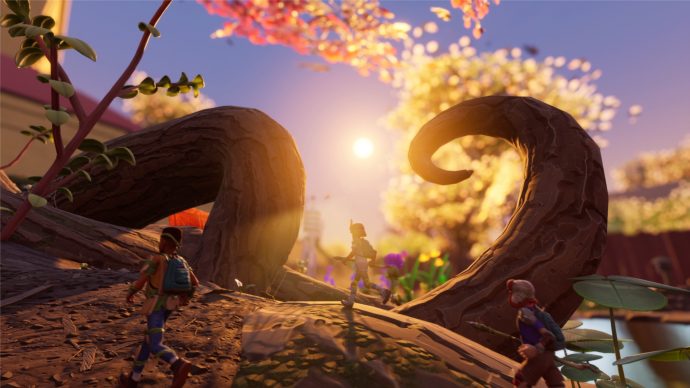 Brennecke name checks survival games including Ark, Subnautica, The Forest, Minecraft, 7 Days To Die, and Don’t Starve as, if not direct influences, games himself and the team spent time with that excited them about the possibilities the genre had to offer. As a fan himself, are there any issues endemic to the genre he hopes Grounded can address?

“We’re always looking at, how can we remove some of the annoying friction? A simple thing is: crafting intermediate materials. Being able to do that in one UI, without jumping through hoops, simple things like that. We play and think, 'This is annoying, it’s annoying in other survival games, we have an opportunity to fix this so why don’t we?'”

Last minute fact dollop: There will be cosmetics. You will not, says Brennecke, have to buy these cosmetics separately - they’re scattered around the world, where you’ll also find vanity items for your base. Although you’ll be using things like grass and sticks to make armour, the slightly-goofy stylisation extends to things like samurai helmets and medieval plate mail. There’s no local co-op or split screen, sessions are hosted, and story progress stays with the host. There’s currently no specific reward for what you do in another player’s game. Once again, you cannot (as yet) pet the gnats, fuzzy though they are.

So, that’s the scoop so far, scoop enjoyers. Brennecke did mention an entire ‘layer’ they’ve yet to announce, and that is where I imagine all the big juicy story stuff is, should it exist. Whatever that ends up being, it’s clearly a departure from what the studio have offered in the past, but, as Brennecke puts it when I ask him about the process of translating that traditional Obsidian DNA to new pastures - he, and the rest of the team, have been at Obsidian for the majority of their careers. Obsidian games are the only type they know how to make.