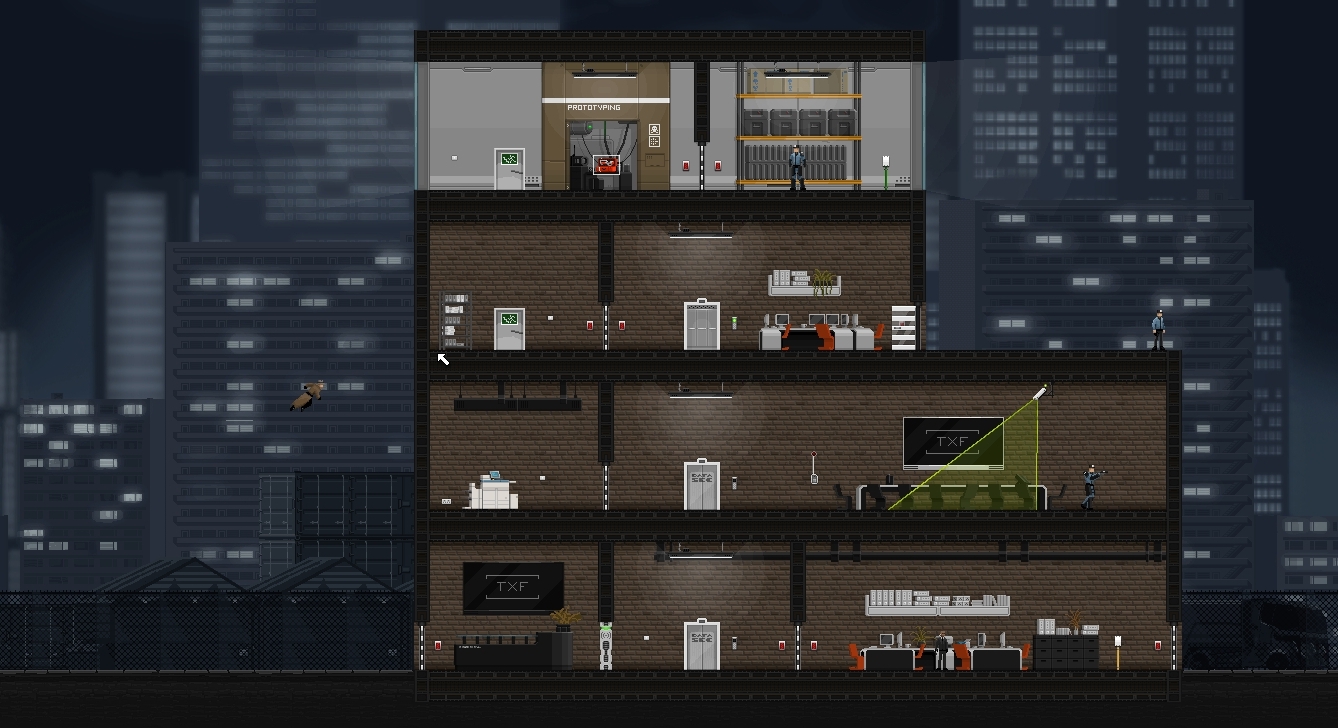 Right, disclaimers up front for this one. I've known Tom Francis, developer of Gunpoint, for at least fifteen years. I remember when he was hired as Disc Editor ("What's a 'disc', grandpa?") for PC Gamer, I've eaten homemade pizza round his house, and felt cool because I already knew him when he was all super-famous at GDC in 2014. I can in no sensible way be expected to be objective about his creations. Fortunately I've never tried to be objective about anything in my life, and Tom's now so successful he probably can't even perceive the atoms I'm made of [exemplified in the further disclaimer that he used to write a column for us - ed.]. So I thought I'd have another play of Gunpoint.

Ha ha, only kidding. I almost wish it were, just for the punchline. Annoyingly, however, this project Tom knocked together in his evenings and weekends while working full-time on a magazine is really properly good. I think he made it out of cardboard and old bits of BASIC he found in a drawer. And then it went and sold over 400 billion copies. 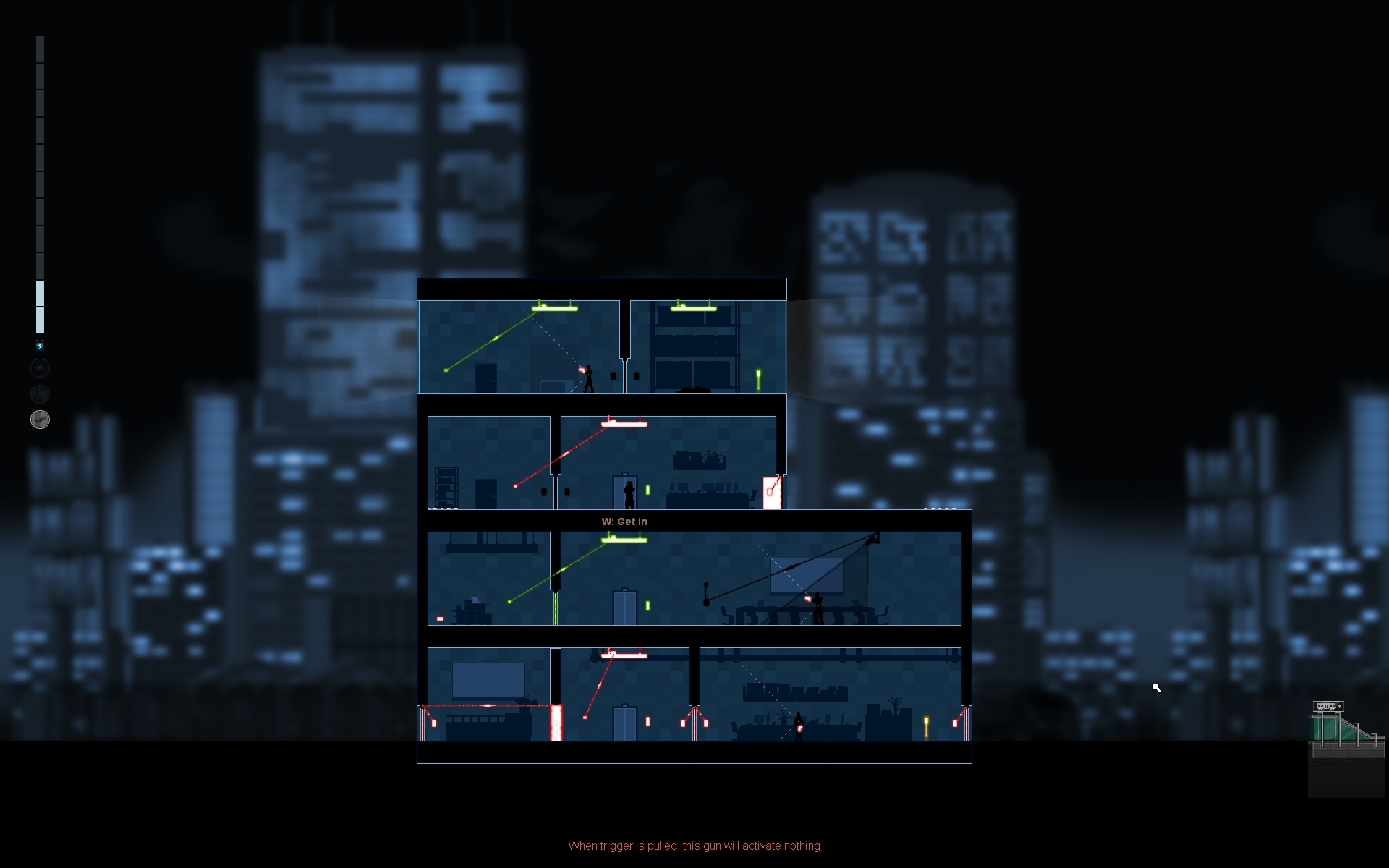 Gunpoint is a game about being a private detective with really bouncy trousers. That's literally true. Right at the start of the game you - Richard Conway - become the proud owner of some "Bullfrog hypertrousers", which allow you to sproing inconceivably high into the air, and fall enormous distances. Blessed with these springy garments, you're ready to infiltrate the buildings of various corporations, as you become embroiled in a tale of corporate espionage, secret weapons, and moiiirrrder.

It's a fun story, too. You begin by visiting a chum in his office, when eek! He's murdered! And you're right there, caught on camera! A colleague of your friend gets in touch to help you wipe the footage, which involves visiting five different back-up locations to hack their computers. Finally done, phew, you're in the clear! Except oh erk, a new client gets in touch saying that she's the number one suspect for the crime since some rotter went and deleted all the recordings - something technically only she should be able to do. Oh what a muddle.

It continues to descend into a pleasantly noir-ish farce as you're hired by the boss of the company's main rival, then by the police chief who wants your help recovering the lost footage, and well, crikey, it all keeps piling up. And it just goes to show, you should always just tell the truth at the start of any bouncing-legwear-based incident. 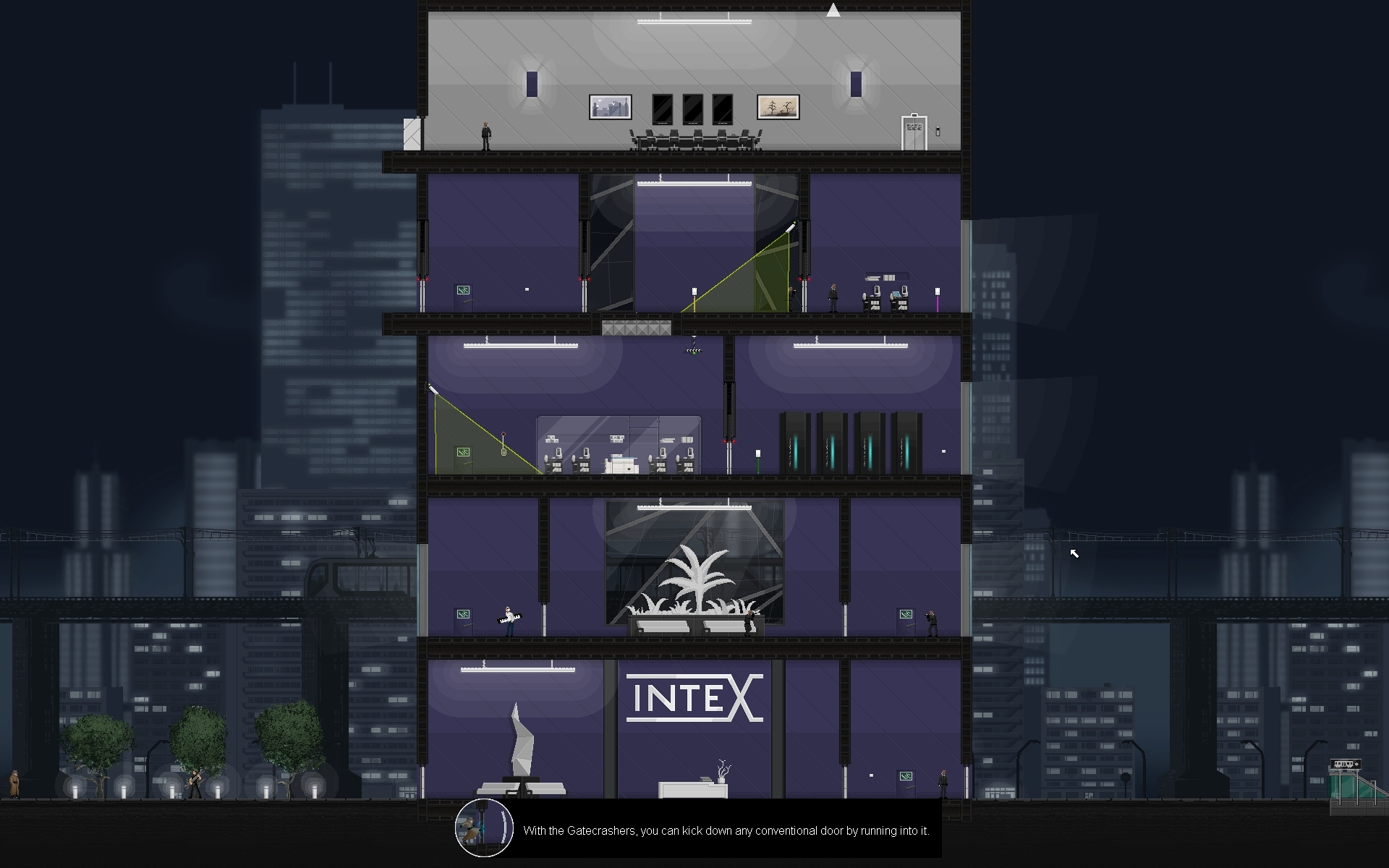 Despite your chipper chinos, the game isn't all about flying leaps of derring-do, but actually more focused on stealth and hacking. With a roll of your mousewheel, you're able to scan a building for its interconnected electrical circuits, and remotely rewire colour-matched switches and items to your advantage. So perhaps you'll simply have a nearby light switch open a distant door, or cause a motion detector to trigger a trapdoor in the floor below a guard. Or better yet, rewire an electrical outlet to feed into a light switch, then hook up a security camera to trigger the associated light, so the guard zaps himself to sleep trying to put the lights back on. As you progress, you'll find yourself putting together intricate networks of triggers and traps, having patrolling guards opening and closing doors for you, while trapping others in rooms. Or jumping on the from behind and bonking them right on the conk.

This switching back and forth between careful planning, and semi-improvised action, is what makes Gunpoint work so well. Not least because this is all presented in 2D, so everything feels manageable. (I know the two games are ridiculous to compare, but I always think of the early Rainbow Six games, where you were supposed to make such careful plans, and then my execution of them was always more of an execution of my team - I was never able to feel like I was in control. It's not at all like that here.) 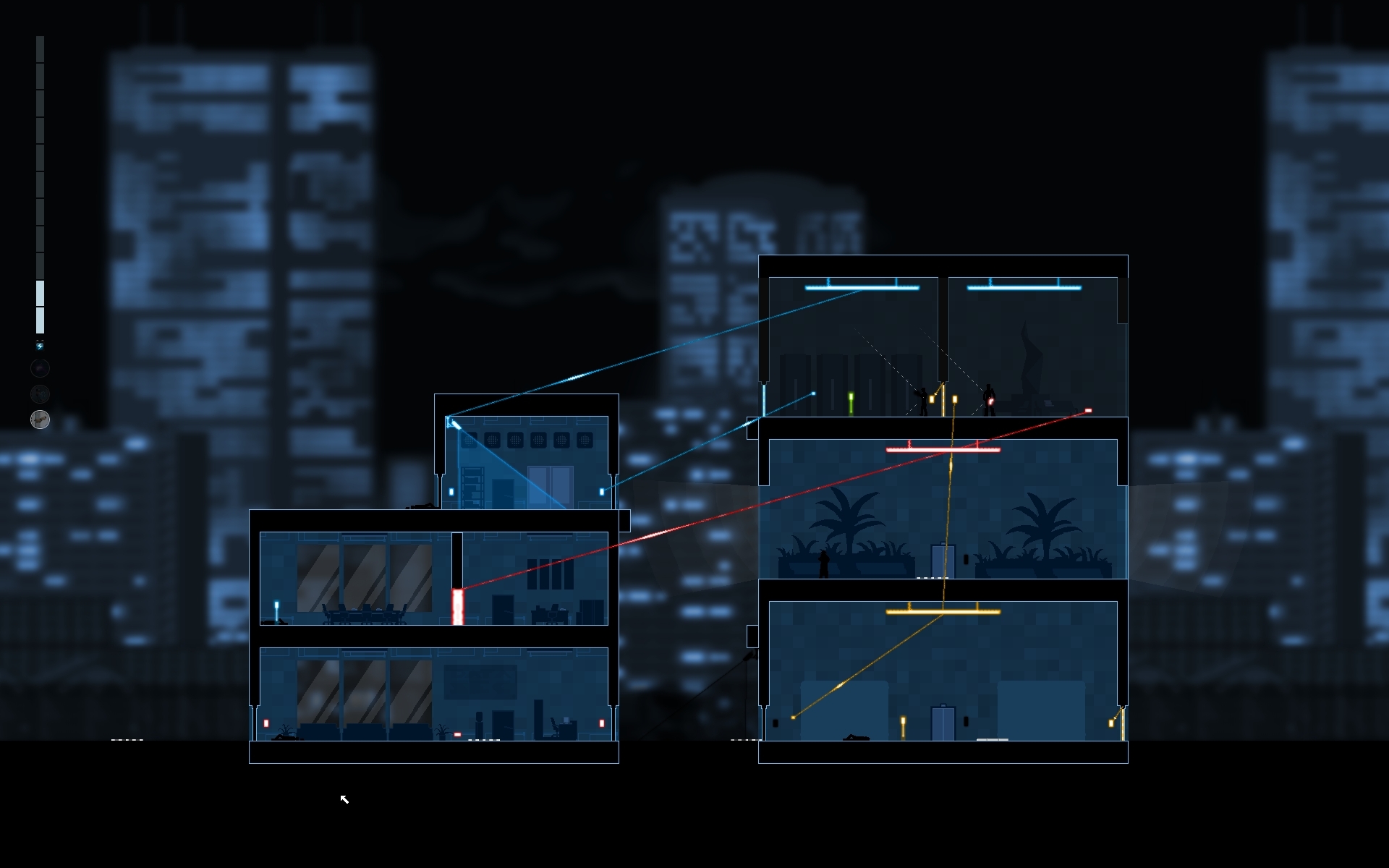 As you progress you earn cash to buy new devices and tweaks in the store, eventually letting you rewire enemy's guns for maximum amusement. You can make it as silly as having them try to fire at you and instead close a door on themselves to knock themselves out. Or if you're particularly mean, hook two adjacent enemies's guns to one another's, and then have them shoot each other instead of you.

The degree of freedom to how you approach a level is perhaps what's most interesting here. Not simply because it lets you pick a style - say, completely ghosting, or being an all-out murderer, or speed running a level, or meticulously taking your time - but because it doesn't judge you for any of it. It is one of the least judgmental games I've ever played. It's up to you how you want to play this, and it's open to the choices you make. At the end it'll show meters of how violent or quiet or fast you were, but there's no penalty attached, you still get paid the same for the mission, and there's no sense of a developer ticking you off for "failing" in any aspect. Which is peculiarly refreshing in the world of gaming. Gosh how often are we told "TOO SLOW!" or "TOO VIOLENT!" or "TOO NOISY!" by the games we play? What a treat to instead be told, "Go have fun!"

It does other things so smartly too, like how the flipping excellent jazzy score seamlessly switches to a more cybernetic rendition when you flick between playing and planning modes. Gosh that's a neat idea, so nonchalantly included. The animations are so lovely, too. And the writing for the missions, while totally skippable, is all a good read!

I just wish it weren't so damned tiny. 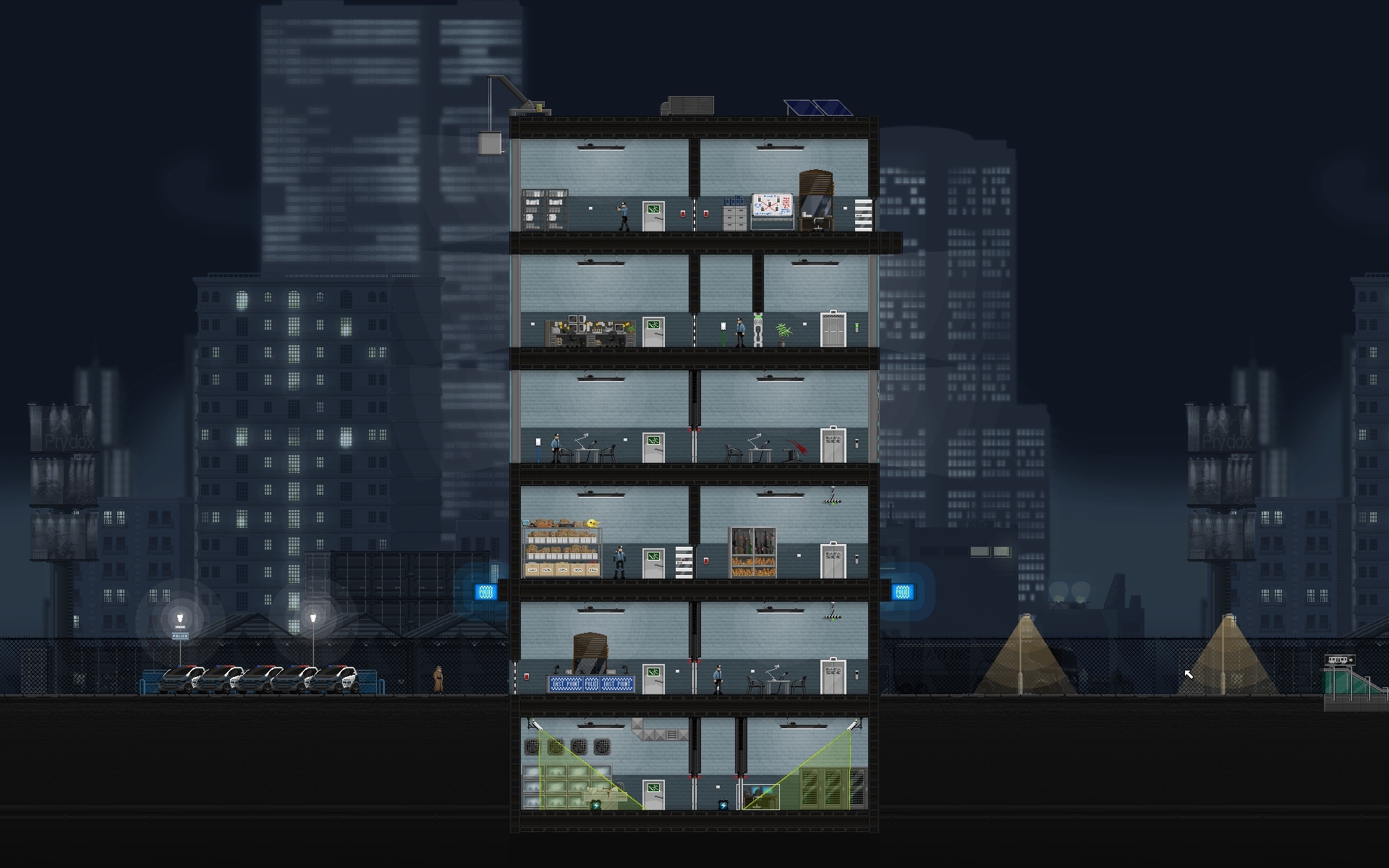 In the seven years that have passed since Gunpoint's release, resolution increases certainly don't help. The game maxes out at 1920x1200, but even there, and indeed even seven years ago, the actual playable area of the first half of the game is about a fifth of the screen! It's so peculiarly small, with no sensible option to zoom in on the small portion of the screen ever used throughout the missions. And I just don't understand why! Just let me look a bit closer! Later, when the buildings are bigger or more numerous, the scale makes more sense, but still, just the ability to zoom would make all the difference.

What I would love to see is a remastering of this one. I've no idea of Game Maker lends itself well to that sort of thing, but rebuilt for modern giant screens would be a real gift. I could certainly spend less of the game hunched all the way forward, squinting at the details like I'm using a microfiche scanner. 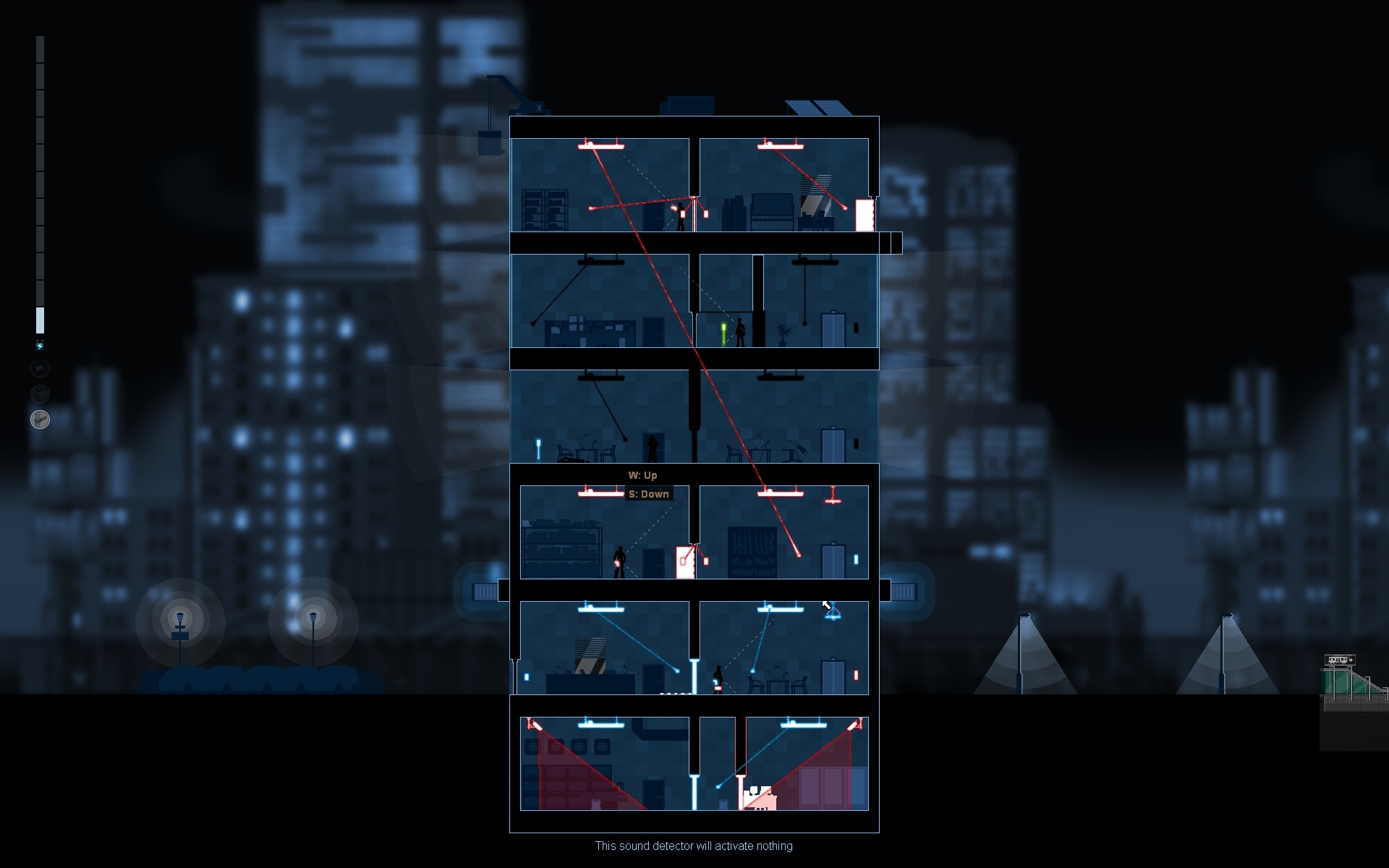 Yet this remains such a special game because of how it offers freedom without criticism. Play it your way, and don't feel judged for it. (Yes, there are sort of letter grades for how you've completed a mission, but I didn't even see them for most the game, so unimportant are they.) And rather importantly, it's a lot of fun. I love that you can see Tom's influences so directly, as if someone took an Introversion game and an Ion Storm Austin game, and blended them together.

Gunpoint is still just great. And I'd say that if I'd never met Tom Francis in my life. I'd say it even if I were seethingly envious of his phenomenal talent and success, even though I was already an established writer when he was choosing which demos went into an unfathomable menu on a cover disc most people just used as a coffee coaster. EVEN THEN.

Can I still play Gunpoint?

Absolutely. It still works without any need for tweaking. I'd love to see it remastered, but you know, he'll probably say something about being busy making Tactical Breach Wizards. You know how he is.

Should I still play Gunpoint?

Deffo. I've had a great time with it, especially the degree of freedom to approach as I choose. And gosh that music is so good.