What Works And Why is a new monthly column where Gunpoint and Heat Signature designer Tom Francis digs into the design of a game and analyses what makes it good.

I love Deus Ex, System Shock 2, and Dishonored 2, and the name for these games is dumb: they're 'immersive sims'. If you asked me what I liked about them, my answer would be a phrase almost as dumb: 'emergent gameplay!'

I always used to think of these as virtually the same thing, but of course they're not. Immersive sims usually have a whole list of traits, things like:

I enjoy all these elements, but a lot of them have nothing to do with each other. You could make two games inspired by immersive sims with almost no overlap between them. In fact, I think that's pretty much what my team and Fullbright have spent the last few years doing. Fullbright are the former BioShock 2 devs behind Gone Home and Tacoma, and my studio Suspicious Developments made Gunpoint and Heat Signature. I basically make games inspired by the first three items on that list, and I'd say Fullbright double down on the last three.

So if you want to make an emergent game, but don't especially need it to be an immersive sim, how do you do it? 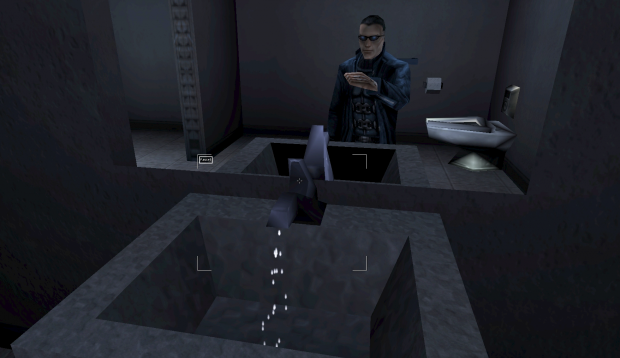 I call a problem or solution emergent if it happened as a result of the game's general rules, not because a developer specifically intended it to happen. If you put a sufficiently big crate in front of a turret in Deus Ex (any Deus Ex), the turret won't shoot you. That's emergent because the rules involved are:

It wasn't necessary for the developer to write a line of code that says 'if the player moves this crate to location x, don't let the turret fire'. If it was, putting some other object in that spot might not work when logically it should. In a good emergent game, the developer doesn't need to predict your strategy to make it work, they just write the rules, make sure you know them, and let you play.

So that's rule 1 for emergence: the game must be mainly governed by consistent rules that are clear to the player.

That one's an emergent solution, but problems can be emergent too. Once in Spelunky, I watched an enemy tribesman wander into a shop. He'd already thrown and lost his boomerang. The shop had a boomerang for sale. Tribesmen pick up boomerangs automatically. Shopkeepers go ballistic if anyone takes something out of their shop without paying. And so I ran, in absolute terror, from the sight of a man walking into a shop.

I knew the tribesman would take the boomerang. I knew he'd walk out with it. And I knew the shopkeeper would flip out. The place absolutely exploded with shotgun fire a moment later.

So rule 2: things get more interesting when non-player elements can interact with each other.

You could call this the emergence equivalent of the Bechdel test: an emergent game needs to include:
a) at least two non-player elements, that
b) interact with each other, in a way that is
c) not just murder.
The shopkeeper absolutely did murder the tribesman, and another shopkeeper, and a dog, and ultimately himself - but it was the boomerang that made things interesting.

Can I tell you one from Heat Signature? It's not my story so I hope it gets a pass. Dan's objective was in a locked room. He didn't have the keycard. A nearby guard did, but they were in a room full of other guards.

Dan had two different teleporters: a Sidewinder and a Swapper. A Sidewinder can take you anywhere you have a clear path to - around a corner, but not through a locked door. A Swapper lets you switch places with someone, but there's no-one inside the objective room. Do you see a solution?

Dan stands right next to the locked door, touching it. He uses the Swapper on the keycard guard. Now the guard's next to the door, so it opens - but Dan is in a room full of guards and about to die. But now he does have a clear route to the objective, because for this one second the door is open. So he just clicks a button on his Sidewinder and he's in the room with his objective.

Rule 3: you get more interesting emergent solutions if you can do things to enemies other than kill them.

Then there was that fight in FTL. I'm up against an Engi ship, and they're wrecking me with heavy lasers and an EMP cannon. One more hit and I'm dead. My shields are up, but when their EMP weapon fires next it'll disable them, leaving me exposed to the heavy laser shots I cannot take. So... I turn off my shields.

An EMP shot disables your shield generator if it hits your shield. If your shields are down, it goes straight through and disables whatever system they've targeted. They might have targeted the shield generator, in which case I'm boned either way. But if there's any chance they didn't, if they're aiming for anything else, I want them to hit. Because then I can just turn my shields back on and block the laser hit.

I turn my shields off. The EMP shot comes. And hits... life support. Perfect! We only need that if we're gonna live more than a minute. Shields up, laser hits blocked, rip them to shreds with my finally-charged halberd beam.

That one wasn't even a good idea. There was every chance it would achieve nothing. I only tried it because every other option was certain death. And when I did, something wonderful happened. Keeping the player on the brink of failure without frustrating them is a whole other article, of course.

Obviously these are not the only rules for emergence, they're just some of the ones I've learned so far. My hope for this column is to bridge the gap between the kind of surface-scratching analysis I used to squeeze into a review, and the deeper but more technical and jargon-heavy analysis aimed at developers. I love delving into why good games work, and I hope I can share my theories in a way that isn't impenetrable.