Update Night is a new fortnightly column in which Rich McCormick revisits games to find out whether they've been changed for better or worse through ongoing development.

I had assumed that, were I trapped in a kill-or-be-killed nightmare future Battle Royale-type dealie, camouflage would be important. In a world where everyone very quickly gets their hands on some form of weapon, I’d want to take lessons from that Hunger Games kid and dress up as a rock, or — at the very least — find a nice pair of neutral khakis that would help me blend into the environment.

But the player-controlled murderers of H1Z1: King of the Kill [official site] don’t subscribe to that kind of wisdom. I’ve been killed by people in tie-dye leggings, by people in unicorn masks, and by one particularly memorable opponent who seemed to be cosplaying as a gorilla. They’ve killed me with luminous green shotguns and pearlescent assault rifles, and rather than pause to consider the emotional impact of taking another life, they’ve stood over my limp body, crotch-chopping like 1990s WWF wrestler.

I braved all this and more in order to appraise the game's current condition. Has H1Z1: King of the Kill been improved by recent patches, and is it yet worth your time and money?

That Insane Clown Posse aesthetic is one of the major visible differences between King of the Kill and its big rival, the current lord of Battle Royale-’em-ups, PlayerUnknown’s Battlegrounds. But there are other key differences, too. 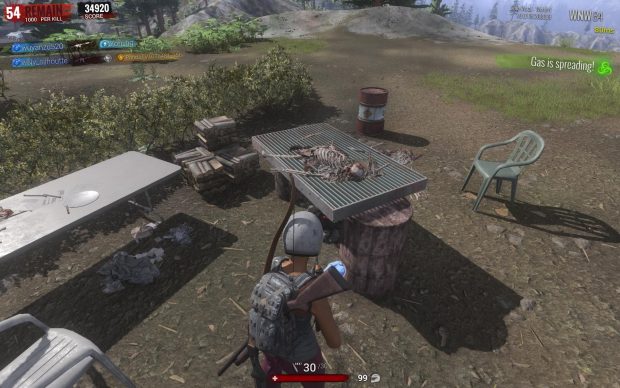 PUBG’s best guns are relatively scarce, scattered between its handful of houses. KotK, on the other hand, crams every structure in its world with more heavy duty weaponry than you could ever carry. Every outhouse and lean-to looks like the home of a profligate doomsday prepper, with four AK47s, two revolvers, and a flashbang arranged casually in one corner of the living room alone.

KotK is faster than PUBG, too. Players leap over fences and between rooftops, sprinting between houses like hyperactive murder children, all hopped up on death sugar and Wrestlemania and gunsgunsGUNS! It’s almost comedically fast at times, with a default mouse sensitivity that meant I was performing pirouettes while trying to shoot down a target, and kill notifications that started to appear before I’d landed from the pre-game parachute drop. 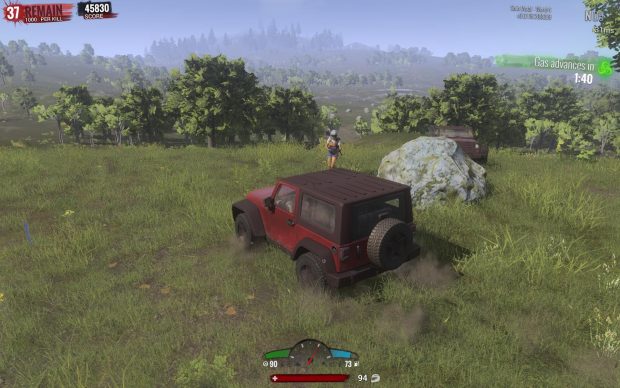 Graham and Brendan discovered as much when they delved into two-player KotK earlier this year. Alone, it can be a more measured experience — if, that is, you can avoid the crowds. There was a simple rule for me: if I saw someone else drop in the same area, I was toast. If I found a more secluded location, let the herd of 170-odd players thin itself out, and grabbed one of the nine million guns on offer, I could reliably stay alive until there were only a scattered handful of survivors left.

I did that for a time: find a house with a high top storey, lie on its floor, train my gun on the staircase. That was boring, though. With so many houses, and so many weapons, it’s both harder and much less important to set up a defensible base. People just weren’t coming to my impromptu murder emporiums — I had to be more proactive. KotK is kill-or-be-killed with the emphasis on the kill. 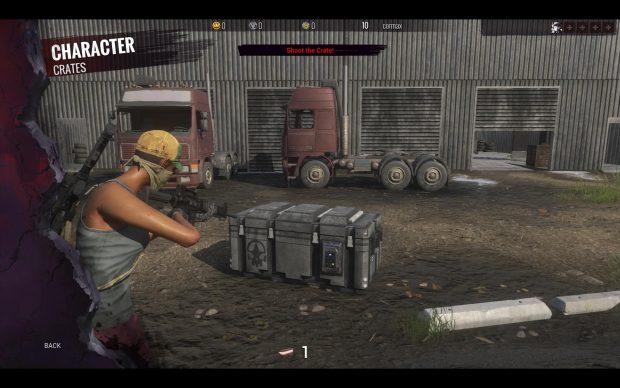 Points are awarded for staying alive, but also for gunning down opponents, and go toward an experience system that spits out crates every five levels. KotK’s crates don’t offer any in-game benefits — all items contained within are entirely cosmetic — but I felt like they were worth earning. Not only for the lurid T-shirt or gun skin contained inside, but for the actual act of opening them: a process that involved shooting them with an assault rifle in a menu-screen microgame. It’s the very best thing about KotK, and a feature that all games should adopt immediately.

Fellow developers would also do well to copy Daybreak’s update schedule. The game has had regular patches over the past few months to add new features and fix issues. Two of the bigger problems — hit detection and an abundance of cheaters — have had extra-special attention, to seemingly positive effect. I was gunned down by hundreds of my fellow players, but not once did I feel like they used anything other than my own lack of common sense to do so. Bullets from both parties felt like they more reliably hit their target now, with mine slamming harmlessly into doors and walls, and theirs striking the fleshiest, most important parts of my virtual body. 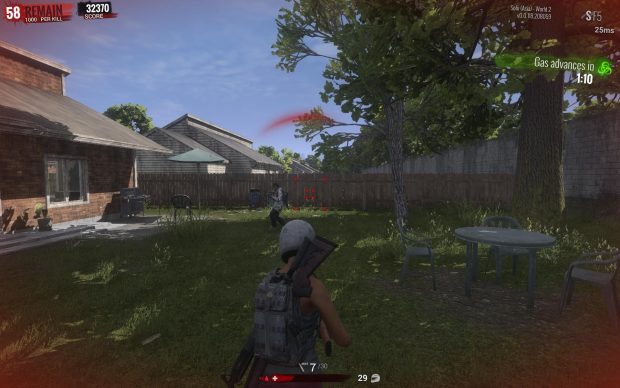 But sadly, while the actual act of shooting now feels more fair, it still doesn’t feel great. Enemies don’t flinch much, making KoTK’s fights feel more like MMO combat than the kind of gun battles I want from a (admittedly large scale) shooter. Weapons lack the kind of powerful smack you’d expect them to have, sounding tinny, and feeling like popguns in the hand — crucially underpowered compared to PUBG’s best.

I had my biggest problems with bows. The bow is harder to use than any gun, requiring a slow draw of the string, a judgement call on its firing arc, and a slow reload sequence. But, I reasoned with myself as snuck up behind a player looting a fallen corpse, that extra effort would surely be rewarded with a one-shot kill. No such luck. I loosed the arrow and watched in horror as my target rose from her crouch, turned on her heels, and pulverised me with her shotgun — all with an arrow protruding majestically from the back of her head like a wooden dinosaur. 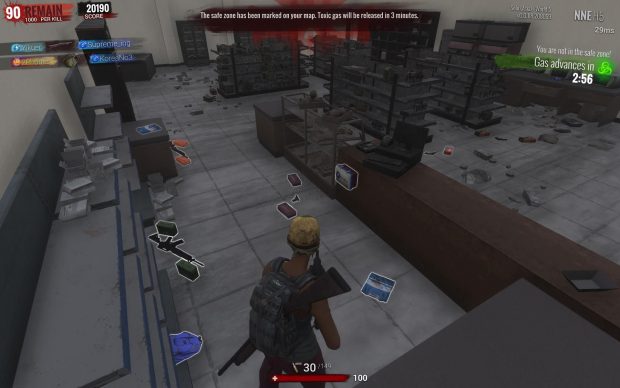 Perhaps I’d have more luck, I figured, using an explosive arrow. KotK has a crafting system, but it still feels vestigial. That’s in part because I rarely had time to actually find a corner and build new items before I was shot to death by some bunnyhopping juggalo, but it’s also because the range of buildable things is still low. When I was able to find a dark corner to spend craft hour, all I could create with my shredded T-shirts and electrical tape was more bandages, a tiny satchel, or some basic armor. The most exciting crafting options — exotic arrows that would set enemies on fire or blow them up — were superseded by regular old bullets, fired from one of the four trillion AK47s littering the map.

Just as the runaway success of DayZ begat vanilla H1Z1, the wave of Battle Royale mods must have been responsible for the branching of the original game’s path. Compared to those mods and its early access rivals, King of the Kill’s strength is stability. Playing the game a year-and-a-bit since H1Z1 split into two separate entities (the zombie-focused H1Z1: Just Survive and and H1Z1: King of the Kill itself), KotK was (for me) largely glitch-free. Some textures would regularly arrive late when I was parachuting in to start a game, and lag spikes meant I had to reload a few guns more than once to make the bullets stick in the chamber, but it’s a far more stable multiplayer experience than many full-release games in recent memory. 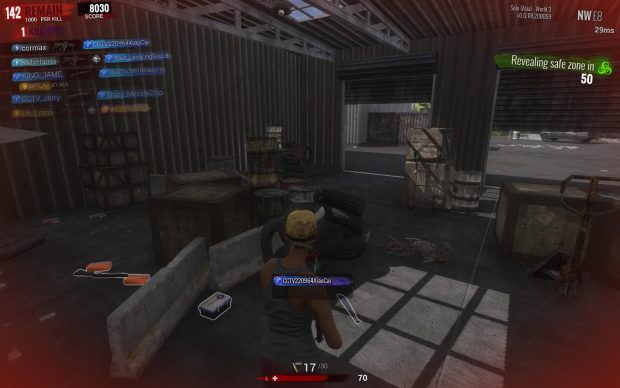 Perhaps the biggest reminder of its Early Access status is a slightly strange naming convention for its seasons — timed periods that rank players on a tiered leaderboard and pay out in rewards accordingly. That nomenclature means that means pre-season five is not followed by season five, but by pre-season six, and so on until the game’s proper release.

We’re deep into pre-season five at the time of writing, and while players can play KotK without engaging in the system of leaderboards and rankings and tiers, it does give the game a wider context that PUBG and other survival competitors are largely lacking. Daybreak has also leant hard into e-sports, pitching KotK as a game that can be played competitively and streamed regularly. 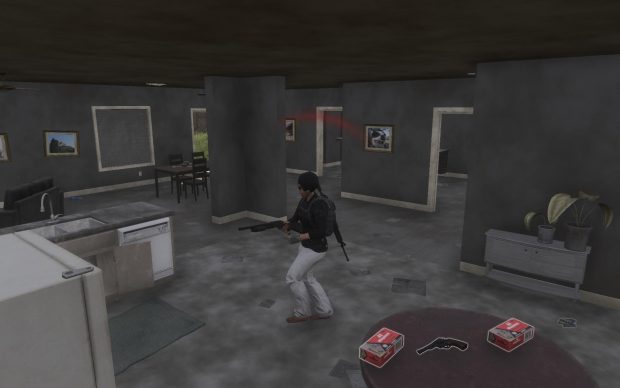 These are nice additions to the game, but like crafting, the three in-game currencies, and the method by which players can bet on their own performance in the upcoming game, they feel entirely optional. Meanwhile, as Daybreak peppers KotK with auxiliary systems in barrages of updates, the core game feels secondary. Matches are either over too quickly to justify queuing for another five minutes to get back into another one, or drawn out interminably across drab towns and identikit campsites.

That means KotK doesn’t seem to know what it is. It’s a survival game that kills most of its players in the first minute? Or is it a multiplayer shooter that rewards players for hiding from their opponents? Is it a new e-sport with ultra-tight balance margins for competitive play? Or is it a sandbox streamer game designed to spit out highlight moments?

It’s not yet clear, but with more thrills coming in other survival games, the promise of a unicorn mask and a tie-dye T-shirt isn’t enough to keep me coming back to King of the Kill’s version of our inevitable Hunger Games-ish future.