Dying Light’s zombies are spooky, groaning and flailing at me as I parkour my player character across awnings and rooftops, but in the brightness of day, they’re exposed. They’re slow — slow enough that they’ll never catch up with my sprinting hero — and as clumsy as you’d expect from animated slabs of rotting meat. The zombie apocalypse has come, but the humans of fictional middle-eastern city Harran are still the masters of the daytime.

Or some of them are, anyway. Dying Light puts players in the weird toe shoes of a free-running government agent, the kind of guy who can leap ten feet across a rooftop, cushion the blow on his ribs, haul himself up by his chiseled arms, and keep running at top speed. His skillset quickly impacted the way I saw the open-world city, and I started to plan high-altitude routes across buildings, scaffolding, and walkways that took me far above the ravening hordes below. Those hordes are dangerous, but split off from the crowd, my character’s parkour skills and selection of pointy implements made small groups of zombies a cinch, applying electrified hammers and cricket bats to mouldy faces turning the mood from spooky to slapstick.

The same can’t be said when the light finally does die, though. Dying Light’s night is truly scary. It’s dark — dark in a way that few games are — and properly full of terrors, playing home to a set of super-zombies that will run and sprint and vault in their demented attempts to chow down on your still-alive protagonist. The most dangerous of these are “volatiles.” These monsters are taller than the average shambler, with Predator-esque triple jaws, catlike agility, and a particular taste for human flesh. They announce their presence with a feral scream and hurtle forwards with all the speed and subtlety of a meat missile.

It took me three tries to get through my first encounter with night-time volatiles. Not because they caught me, you see, but because I was so effectively unnerved by having a slavering, screeching super-corpse sprinting along not three paces behind me that I had to pause the game and have a walk around my flat to calm down. Three years after launch, these segments of Dying Light still teased out a powerful blend of revulsion and fear from the depths of my brain — I’ve not had as physical a reaction to a game enemy since Ravenholm’s fast headcrab zombies. 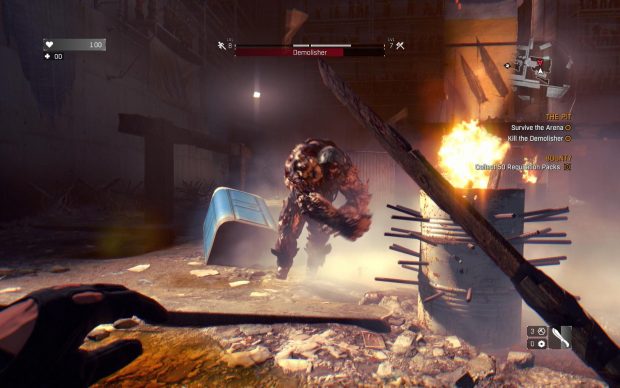 Fortunately, these nastiest of monsters only come out in the dark. Unfortunately, Dying Light makes you spend a lot of time hanging around in the dark. Dark places like the underground parking lot in the east of the city that you’re sent to as part of the “Snake in the Grass” bounty — one of ten free “content drops” developer Techland has added (and is continuing to add) to the game since its launch in early 2015.

Complete the bounty, and players get access to a blueprint that will allow them to craft subsonic ammunition for silenced weapons. Techland only added silencers a few months earlier, in a late 2017 content drop, but the special bullets were rare enough in the world to be almost useless, only available in the backs of some police vehicles found out in the open world.

The ability to craft them at will is a powerful skill, then, but it’s not an easy unlock. In addition to the rank-and-file zombies that had set up shop in the underground parking lot, I had to dodge roving and unpredictable volatiles that called the garage their home, all the while throwing open van doors and rifling through car boots that could potentially trigger noisy alarms in order to find relief packages dropped by aid agencies.

It took me about half an hour in the end, after I settled on a methodical approach of beating every zombie I saw to their second death before moving on, for fear that they would pin me in place for a volatile viewing. My heart was in my throat the entire time, as my collection of makeshift weapons broke against crumpled skulls and snapped shins. The final package was the worst: it was guarded by a volatile, pacing wildly around a room with only one entrance. Like regular zombies, volatiles will investigate firecrackers, but only for a very short period of time before stalking back to their regular pattern. That gave me a window of a few seconds to distract the beast, make my way into his lair, and nab the box I needed. 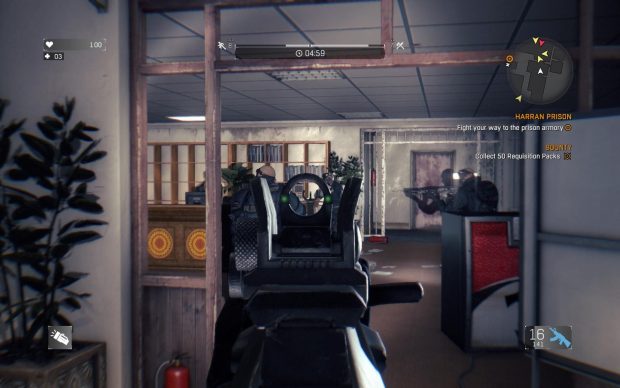 He came back while I was still opening the chest lid, but miraculously didn’t spot me before I was able to duck behind a crate. Heart audible in my ears, I lobbed another firecracker out of the door and to the right, while I sprinted out to the left, taking my last prize and earning the blueprint in the process.

I had to have another break after my 30-minutes of sweaty-palmed play, during which I hit YouTube to see how other people completed the challenge without being spotted. The answer, I discovered, was “incredibly quickly.” In the three years since launch Dying Light has gained a community of devastatingly competent players, many of whom happily use grappling hooks, electrified broadswords, and other late game gadgets to speedrun the game’s toughest challenges in bafflingly short times. Happily for me, I had some of these long-term players join my campaign playthrough, popping into Dying Light’s drop-in-drop-out co-op and helping out with stupidly powerful weapons.

These players boosted me through a set of story missions, but some of the content drops remain out of the range of newer players. The Prison Heist, for example, was totally off the table for me. The challenge gives players a set time limit to get to the centre of a well-defended prison on an offshore island, forcing them to face gun-toting guards as well as top-tier super-zombies before they can collect crates of loot. I spent an hour beating my head against the guys on the front gate alone, too short on ammo and decent hand-to-hand weaponry to get very far. YouTuber GreyWolf, on the other end of the spectrum, does the whole run in three minutes and 55 seconds, on the hardest difficulty setting, on their own. 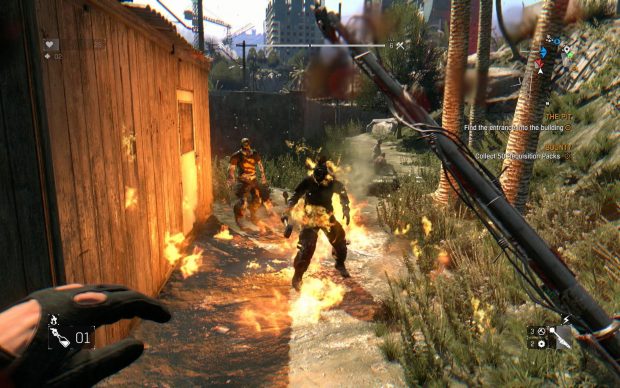 On the first time through the campaign, the free-running movement system is a way to get out of trouble. Persist with the open world bounties, late-stage missions, and the increasingly difficult content drop stages, though, and you’ll start to be able to take back the night like these speedrunning free-runners — to plot perfect lines through physical space like an actual parkour-ist would do, to bounce and leap around the world like a blood-soaked Sonic the Hedgehog while the strongest zombies moan and claw at you from below. At its best, Dying Light feels less about zombie combat and more like a racing game, or some dark version of Tony Hawk’s Pro Skater.

And it’s good that it’s that way around in Dying Light, because its combat alone isn’t enough of a draw. Without active blocks, counters, or indications of the damage you're doing, one-on-one fights are too woolly to feel great: some zombies happily taking several smacks to the cranium before they even fall over, while others feel like they’d stay down after a stiff breeze. Fights against other humans are worse: they block your attacks with ease but prefer to stand in place than rush you, their AI apparently unconcerned that they’re milling about in the middle of the end of the world.

My preferred method was to run at still-living opponents before dropping into a slide and kicking them in the kneecap. This sends them spinning to the floor where they can no longer block you, but there’s an unsavoury sensation to casually kicking another person to death by hammering the E button. Between their grunts and the ease at which I could just keep kicking, I felt like reaching down and stoving their face in with a length of gas piping was the merciful thing to do. 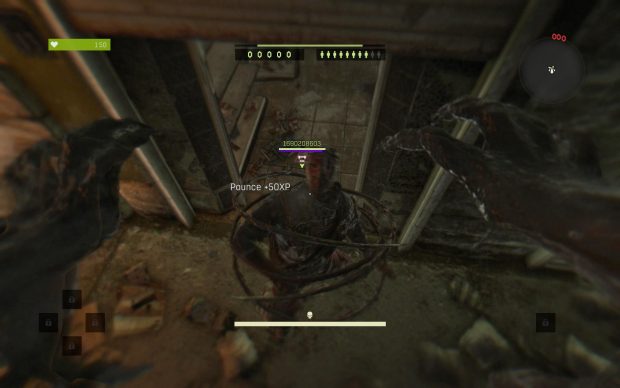 It makes more sense to be killing faceless human goons in Dying Light’s “be a zombie” mode. Donning the warped and wibbly skin of the Night Hunter ultra-zombie is an enjoyable process: the monster can zip across whole swathes of Dying Light’s maps using fleshy tendrils, screech to spot human enemies, and perform a flying leap that kills people in a single bound. But while it’s still possible to get a game going in 2018, non-zombie players have a tendency to drop out before the carnage can really start. Techland have tweaked the mode based on feedback, but those players that do stick it out, in my experience, still prefer holing up in a defensible position than trying to destroy the nests they needed to win the round.

It’s not enough to turn me away from Dying Light, though. This site has previously described it as the videogame version of “the floor is lava,” and this weaponised form of the childhood game has only become a smoother experience with the introduction of a solid new (paid) campaign, and a selection of neato (free) updates. Even if you only come back for that first night, it’s worth it to see how scary zombies can still be.