Playing Paladins is like walking into a supermarket in another country: you recognise most of the stuff in there, but everything is slightly wrong. But where exotic hypermarches have tubes of Prângles, cartons of Jiffy Cakes, and peanut-flavoured toothpaste, Paladins has bizarro versions of characters from Dota 2, Team Fortress, and Overwatch.

There’s the small ginger man with a Nordic name in an engineer’s jumpsuit who deposits turrets and defends them with a pocket blunderbuss. There’s a muscular German dude who can throw out a shield to block incoming fire, just like Overwatch’s Reinhardt. There’s even a direct D.Va-a-like: a smaller character riding a much larger mech who can jet forward on rocket boosters and absorb enemy fire with a front-facing shield.

These specific characters were some of Paladins’ first heroes, made available to all when the game went into open beta last year, and developer Hi-Rez hasn’t totally turned away from their peers’ successful MOBAs and multiplayer shooters in the months since. Tree-man Grover works like a much less hyperactive version of Overwatch’s Lucio, passively healing those around him. Flanking master Talus also feels like an Overwatch cast-off, borrowing Tracer’s ability to steam into close-range combat with dual machine guns before teleporting back to where he was a few seconds previous. Seris looks further afield, with the ability to load up foes with ghostly debuff orbs before bursting them for heavy damage — like Dota 2’s Shadow Demon. 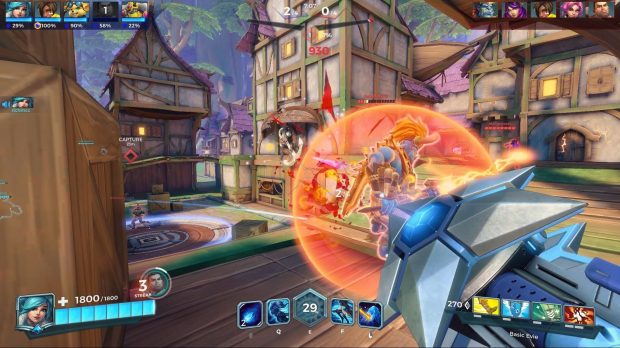 It’s not just characters that they’ve found inspiration for in other games, too. Paladins’ modes include Payload: a fairly straight copy of the TF2 mode of the same name in which players have to capture and then escort a bomb into enemy territory. The main change is the speed of the match: Paladins games are over much quicker on average than a round of Overwatch or TF2.

But as Hi-Rez have added more heroes to their game (there are 34 of them now, with a new one arriving every month or so), they’ve also started straying further from existing templates. New birdy boy Strix has elements of TF2’s Sniper, but can flip between pistol and rifle and turn invisible for short periods, allowing him to adapt, and play a mid- or long-range role on the field. Space wizard Jenos is weirder, with the ability to lift enemies off the ground and hold them in place, before lowering his weapon and bouncing around the map at a boosted speed.

A few of these heroes are available to all players, while others rotate in and out for free-to-play people to sample for week-long periods. If you want them on a more permanent basis, they’re all available for unlock with in-game currency, individual payments of real-world cash, or — if you want them all in one go — by buying a Paladins Founder Pack (currently priced at $14). It’s not a particularly egregious price, but it does rankle when most of its obvious competitors offer their heroes up for free, and it’s made more annoying when Paladins has no easy way to test new heroes ahead of time to see if their abilities fit your play style.

It's not quick to unlock a new hero, too, taking me about six hours of solid play to earn the necessary coin. I decided to focus on Terminus, a brand new addition to the game who sounded great: a grey-skinned frontline hero who can slam down hard with his humongous axe and absorb incoming damage with his glowy purple arm. But I found a problem with that plan very quickly — I was shit with Terminus. 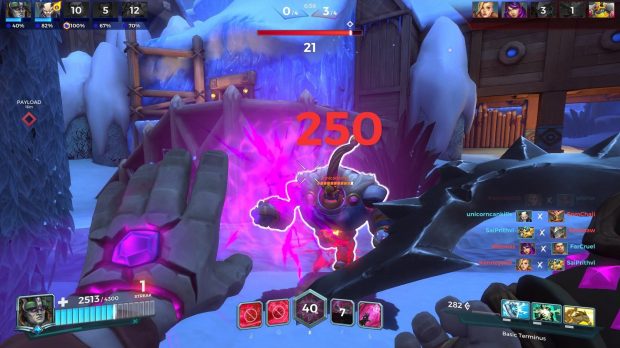 Really, really shit. I launched myself into firing lanes, confident my glowing gauntlet would negate the incoming bullets, only to die a few seconds later. My ponderously slow walking speed meant I was stuck waddling around the midfield, waving my axe at people I couldn’t hit, and only launching myself into the air out of frustration. My ranged attack — a slow purple bolt — felt slow and weak, and his aerial attack was so heavily signposted that enemies just sauntered out of the way.

I ended up going straight back to Fernando, the Reinhardt-a-like with the portable screen shield, for my frontline duties, and immediately had myself some much more successful games. A few matches later, annoyed at the small pool of heroes available to free players, I grudgingly decided to get the Founder Pack, unlocking all of the other hero options the menu had previously greyed out. In that wider pool, I found far simpler and more effective characters than the complicated Terminus. They included Tyra, whose main ability is access to a powerful gun, Viktor — a Soldier 76-esque figure with a powerful gun — and new woman Vivian who packs a powerful gun, just for a change.

These shoot-happy heroes are satisfying to use. Not so much for the actual shooting — which is crisp enough but lacks the punch of a more pure FPS — but for their obvious applications on the field. Terminus, and some of his other more esoteric friends, feel particular unmoored when compared with these run-and gunners. It’s not that they don’t have a use — I’ve watched top-tier players deploy these characters with lethal precision — but they’re so specialised that they don’t always have a home in solo queue or pick-up games.

That’s a general feeling I got from Paladins. Despite looking and functioning like Overwatch’s heroes, Paladins’ characters feel more limited in their roles than Blizzard’s smaller band of misfits, and less capable of performing in auxiliary roles away from their core skillset. That’s in part because there’s so many of them, but that restriction is mitigated somewhat by Paladins’ card system, which allows players to load up their chosen character with buffs to specific skills and then choose individual builds as they head into games. I had two Strix builds, for example: one that optimised his movement speed during stealth and decreased the cooldown on his flare, ideally making him a primo spotter-sniper who could escape at the first sign of close-range trouble; and one that emphasised his pistol and played around lucky rifle snapshots. 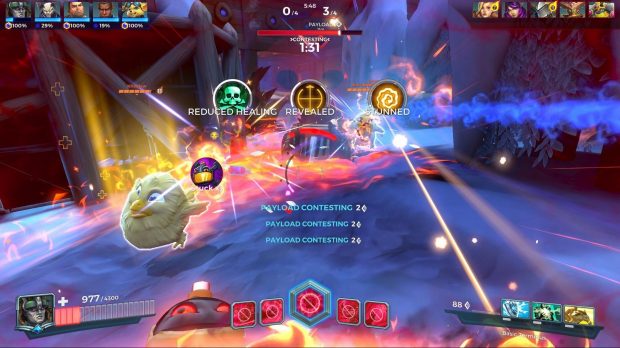 The two builds felt slightly different, but I’m not convinced I would’ve clocked the specific bonuses had I not been primed to look for them. Then again, by drastically altering a character’s capabilities, the danger is that Hi-Rez would be vague-ing up the expectations of players on the opposing team and muddying strategic play.

It’s a question the developers themselves have wrestled with — how much should these cards impact play? — but for now at least, with the game still technically in Steam's Early Access system, they’re fairly easy to come by. Cards can either be crafted with one of Paladins’ multiple in-game currencies, or found inside chests that are earned by playing games, and can be unlocked for free. Fresh (or lazy) players can simply equip the basic cards at the start of a match, using a set of default options that cast the chosen character as something of an all-rounder.

In general, those characters are not as charming or capable as the champions, heroes, and summoners of their peers’ games, but one thing that can be said for Paladins: there sure are a lot of them. The constant stream of new characters means that, even if Overwatch is eating most of its lunch, Hi-Rez’s game does at least have Blizzard beat when it comes to variety.