Bolters are the standard-issue weapons of Warhammer 40,000’s Space Marines, and they fire bolts. But they’re not just bolts — not really. As befitting the grim darkness of 40K’s far future, the bullets that Space Marines fire are individual rocket-propelled grenades, each backloaded with enough fuel to force them through ceramite armor, and frontloaded with enough explosive to shred the soft meat hidden inside that armour.

The Umbra-pattern Storm Bolter typically carried by Space Marine Terminators is two of these guns, lashed together and set to fire extra-large magazines on full-auto setting. It’s a gun so chunky that it can only be fired by eight-foot supersoldiers wearing tactical dreadnought armour — the only plate sturdy enough to support a storm bolter’s firing without popping the wielder’s arm out of joint. 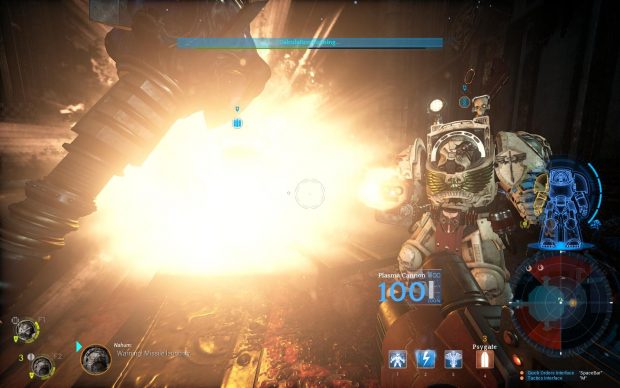 Deathwing’s storm bolter isn’t the only underwhelming weapon in its arsenal. In Warhammer fiction, the plasma cannon is meant to launch superheated streams of white-blue matter, burning anything it touches with the force of a sun. Here it goes “pew” quietly, a puppy’s sneeze issued apologetically as the gun coughs up a slow-moving ball of weakly glowing goo. The Spear of Caliban — a legendary weapon named for the Dark Angels’ homeworld and invented for Deathwing — isn’t much better, a rapid-fire plasma cannon variant that manages to feel weaker than its already-flaccid bigger brother.

There’s a similar problem with Deathwing’s melee weapons. Terminator power fists are meant to be giant Hulk-hands of crackling energy, capable of cracking tank armour and splitting daemon skulls with a single punch. Here, they whiff more than they hit, and when they do connect, enemies don’t explode so much as gently crumple. The thunder hammer and shield feels better, connecting against alien heads with an audible crack, but its ponderous swings mean that a solid interaction feels just out of reach — too often I was stuck just hammering Q until the latest wave of suicidal gribblies had cleared.

My weapon of choice became the heavy flamer: a fire-belching weapon that sat under my Terminator’s right wrist. Fire is a slower way to kill the xenomorph-esque genestealers that infest the eponymous Space Hulk’s corridors, but it was still effective, and the throaty woosh that the gun coughed out whenever I pulled the trigger made the decision to fire it a more enjoyable one than most of its peers. 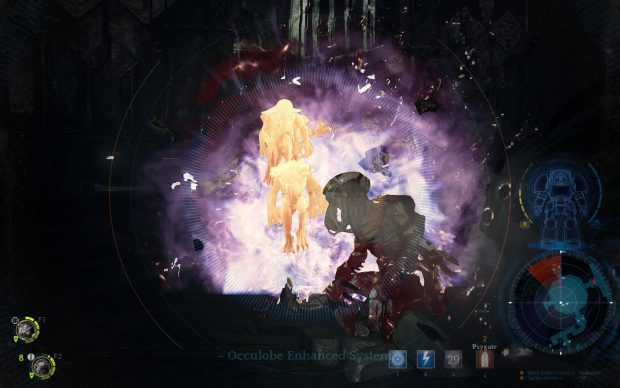 That’s not to say these weapons aren’t effective. It’s the opposite, in fact: Deathwing’s basic genestealers tend to collapse at the slightest contact with bullet or blue goo alike. But that hollowness means there’s no satisfaction in mowing down waves of hive-minded monsters, and despite a stompy step effect and some screen-shaking recoil, there’s no real heft or weight to these outsized weapons.

That the weapons were underwhelming might not matter so much if there was more to Deathwing than just killing through corridor after corridor of aliens, but that’s not the case. Streum On’s game is a horde shooter, and that horde’s intelligence is markedly low. It certainly jives with the genestealer’s heritage that they’re mindless slicing drones — they’re the shock troops of the Tyranid invasion fleets, the advance wave sent out by the extragalactic invaders. But that also means there’s no complexity in their eradication, their only imperative to sprint in a straight line toward the player until they get blasted into spiny splinters of biomass. 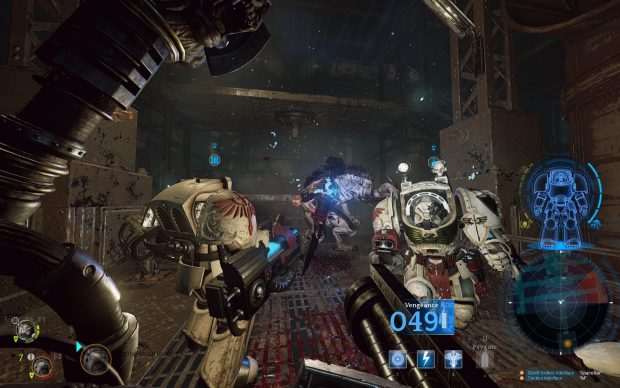 On the plus side, those streams of genestealers are now running at full speed. At launch, Deathwing had its own technical gremlins slowing its framerate down, but the Enhanced Edition ran smooth for me, even on older hardware. New special missions, introduced last year, also go some way to adding replay value to the game once players have completed the nine-chapter campaign. These missions re-use levels from that story mode, handing out random objectives in parts of the campaign maps I’d either visited or left largely unexplored. These objectives change with each playthrough, and tasked me with assisting tech priests, scuttling ships, or activating consoles. But despite their story conceits, these objectives all had the same solution: waddle to a place, press E on a thing. They had the same outcome, too: the thing, having had E pressed on it, heralds the sudden arrival of multiple waves of genestealers.

Braving these waves becomes a more appealing prospect with a friend — or at least an internet stranger — as Alec found out in his review of the original game. Humans are quicker, cleverer, and more reliable than Deathwing’s lumbering AI Terminators, but trying to find a multiplayer game two years after launch is a difficult affair. I had to rope in a friend instead, and found that parceling out firing lanes over voice chat and flipping between loadouts made the Space Hulk a more enticing place to spend time.

If you can find enough multiplayer games, then you'll (slowly) unlock specialisations for various classes of Terminator armour. This includes the brand new Interrogator Chaplain — a cheerful guy with a skull for a face and a crozius arcanum (read: righteous bonking stick) for a melee weapon. Interrogator Chaplains are a bit of Dark Angels-specific lore, torturers who put both the “grim” and the “dark” in 40K’s grimdark, but in action they function similarly to their less torture-y peers — albeit with a helpful instant resurrect power. 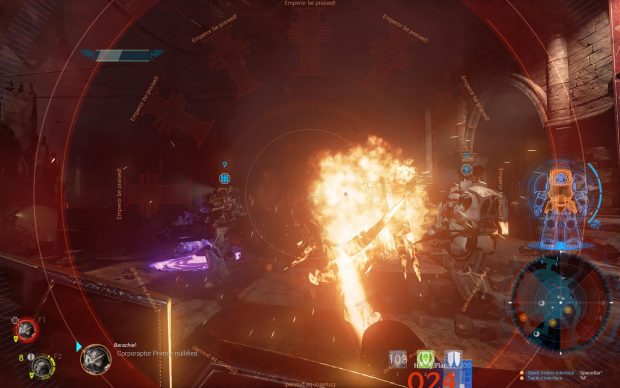 It’s not just genestealers that you’ll be facing in the Enhanced Edition, at least. Except, it kind of still is just genestealers. Streum On has added an exploding flavour of the Tyranid terrors in the latest update: a purple glowing suicide bomber that announces its arrival with a nasty scream. It’s fun to pop one of these volatile creatures while it’s in the midst of its friends, but too often they’re obscured by a mass of chitin and claws, and make themselves known only when they arrive to kill your squadmates instantly.

Aberrants, too, are another new and frustrating addition to the Enhanced Edition. They’re the biggest departure from classic genestealers on Deathwing’s menu, and are hulking mutants: half ‘stealer and half human, and even taller than a Terminator. They give some visual difference in amongst the hordes of Alien-a-likes, but their weapon — a mining laser — was the cause of my most annoying deaths. It’s monstrously powerful, able to tear a significant hole in Terminator armour with a single blast, and while it takes time to heat up — time I should’ve been using to seek out its owner — it’s not always viable to find far-off mutants while you’re having your neck nibbled by their close-range pals.

It’s particularly annoying when you’ve given yourself a close-combat loadout. I experimented with the lightning claws for a few levels, trying to wield the two-handed melee weapons like a lumbering Wolverine. But while I’d do my best to give my two AI Terminator compatriots directions to shoot the mutants I couldn’t, they’d regularly end up either missing their shots or looking at me forlornly like giant clompy babies, their armour getting chipped away by gun-carrying genestealer cultists.

That’s a lot of talking about imaginary space guns, but in the grim darkness of the far future there is only war, and guns are pretty integral to war. Deathwing, even in its rejigged state, can’t fall back on either advanced AI or complex mission design to draw the player in, as neither are present. That leaves weapons, and while Deathwing’s look the part — as chunky and scroll-encrusted as you’d hope from the ultra-gothic Warhammer 40,000 setting — they just aren’t fun enough to fire to make trudging around the corridors of smashed-together spaceships worthwhile.