Space Hulk: Deathwing must have been a dream project for little French indie studio Streum On, creators of the endearingly janky E.Y.E: Divine Cybermancy. As a team they'd started their careers with making Warhammer 40,000-themed mods, so having the official key to the kingdom must have felt like a miracle, but with a famous license and a higher budget comes higher expectations.

While undoubtedly more polished than E.Y.E, Deathwing still felt like a low-budget game with a high-budget facade. After an additional year and a half of development and launching alongside the PS4 version of the game, an Enhanced Edition rolled out today, addressing many of the flaws of the original launch and for those with the original version, it's a free upgrade.

While some of the Enhanced Edition features had already rolled out via incremental patches for the original game, the re-launch appears as an entirely new store entry on Steam, although if you already own the game it'll pop up in your Steam library alongside the old version. The biggest new feature is Special Missions. Once you've completed a map in story mode, you can return there with additional routes open to complete randomly generated missions, adding a lot more meat to Deathwing's originally under-padded bones.

Another major improvement has been performance optimisations - a requirement for the console release, undoubtedly. A quick poke around the first mission confirms that the game does run noticeably better, and performs nicely on my 1070/i7 laptop at maximum settings, where previously it would chug pretty badly once the first enemy swarms showed up. Other new goodies include a new class, more guns, new enemy variants and a well fleshed out cosmetic customisation system, because the Emperor wants you to look fabulous.

Still, some of Deathwing's underlying flaws remain unaddressed, including the not-quite-impactful-enough gunplay and the flailing melee combat. While this is the game that arguably should have launched at the tail-end of 2016, competition has dulled its impact once more. Still, it is a lovingly detailed tribute to the setting, and will undoubtedly find its audience with Warhammer 40,000 fans, but the rest of us will probably stick to bashing rats instead of angry purple aliens. 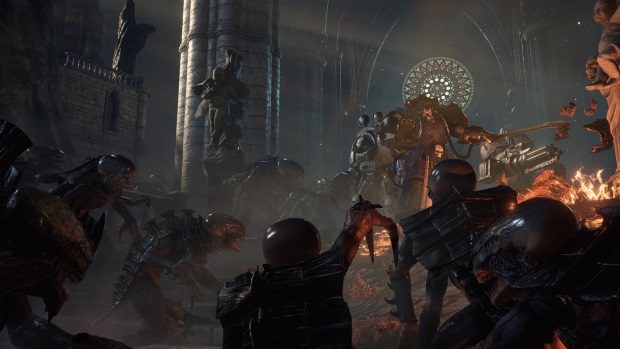 While the Enhanced Edition of Deathwing is a notable improvement, this feels like an ill-timed relaunch. If you want first-person Warhammer-themed co-op ultraviolence, then you'll probably be better served by Vermintide 2. While it may be more close-combat focused, it's hard to argue that it's not just a better, bigger, more polished experience on the whole. While Deathwing is by no means a bad game (especially after this overhaul), this is perhaps just a case of being too little and too late.

Space Hulk: Deathwing Enhanced Edition is out now on Steam for £35/$40, minus a 20% launch discount. Owners of the original release will find it in their library already.