Santa Claus got into my taxi last night. Not some bloke dressed up as Santa. The Santa. With the reindeer and the sleigh and the presents. I wasn't even aware it was Christmas Eve when my gruff taxi driver rolled out of bed that day, but there he was, his large hat slung over a tired, booze-addled eyelid and his beard all messy around the edges.

At first I thought he was just some drunk who'd put on a Santa outfit for a laugh. He certainly didn't act like Santa, and goodness the language! Ranting about "this manure-pile of a new generation" and how "Parents are losers, idiots" and "the real problem" of the world. What would Mrs Claus think? But then he started talking about how he remembers everyone he meets and how, as a child, my driver had such god-awful handwriting that his letters to the North Pole were practically impossible to decipher. My driver reacted like he'd been punched in the stomach. Just who was this guy?

He was being coy. He kept talking about how he needed to get back to where he 'parked', and at first I just assumed he meant his car. He scoffed at the idea. "Yeah, right!" he said. "I work out of a convertible!" He continued: "It shouldn't be hard to spot... There's the sleigh and a couple half-dozen reindeer."

That set off alarm bells. Could this guy really be the Santa? I'm still not entirely sure. After all, he supposedly parked this beasts down an alley near the Champs-Elysees, which isn't exactly the most secret of locations, nor particularly nice for the reindeer. When he finally got out of my cab, he "slipped on the wet sidewalk" and grabbed a streetlamp for balance, "clumping along the alley". The last I saw of him was the sight of him rummaging through a pile of boxes, pushing a trash can on wheels aside and simply... disappearing. No sleigh. No reindeer. Nothing.

I tried to put it out of my mind. After all, I was meant to be trying to solve a murder and helping the police catch The Judge, a serial killer prowling the city streets and who'd almost made me his sixth victim a few weeks earlier. I couldn't be worrying about strange Santa characters whose breath was, and I quote, "96% brandy". But how did he know all those things about my taxi driver? How did he know about his bad temper and his terrible handwriting? Maybe he just got lucky. Maybe, in his experience, all Parisians tend to grumpy little tykes who can't write for toffee growing up. It could have been a fluke. But maybe... just maybe he'd been the real thing.

If he crops up on my map again, you can bet I'll answer the call. 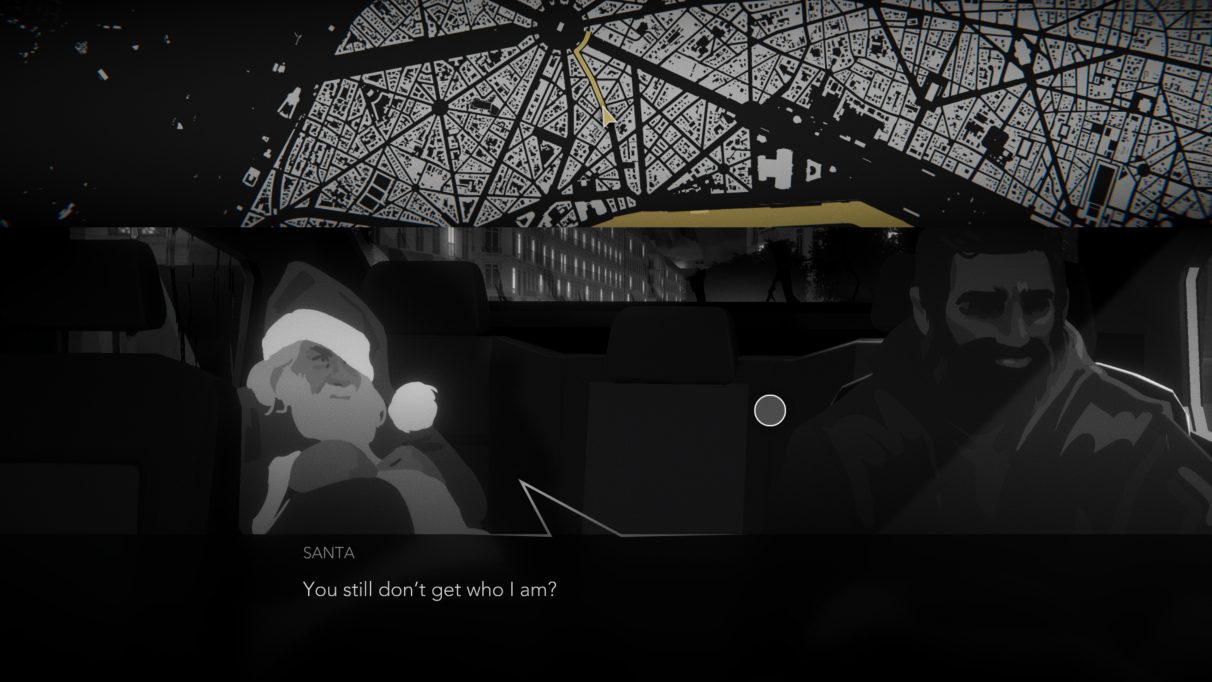 Or maybe you'll have a better time finding out more about this strange character by asking different questions. If you want to give Night Call a try yourself, you can pick it up on Steam, GOG, Humble or the Windows Store as part of Xbox Game Pass.