I must admit that I haven’t been keeping up with Hearthstone's reveal season for its latest expansion, The Boomsday Project, as closely as I usually do. Luckily, it shouldn’t matter too much, because I’m pretty sure the only card I want to play with for a while is Whizbang the Wonderful.

Whizbang earns his superlative by randomly replacing your deck with one of the 18 Blizzard crafted recipes that they produce for each new expansion, regardless of whether you own the usually required cards. These recipes usually focus on the unique archetypes and playstyles of the set, giving a lot of room for variety for the price of one card (albeit a rare, expensive legendary).

One of Hearthstone’s ongoing issues is that crafting cards takes a lot of resources. Most players will only have enough in-game currency to craft a couple of decks, and understandably tend to focus on making the very best ones in order to increase their chances of winning. To date there hasn’t been a lot of room for experimenting with decks just for fun, unless you were willing to put in a lot of real money to be able to afford the cards. 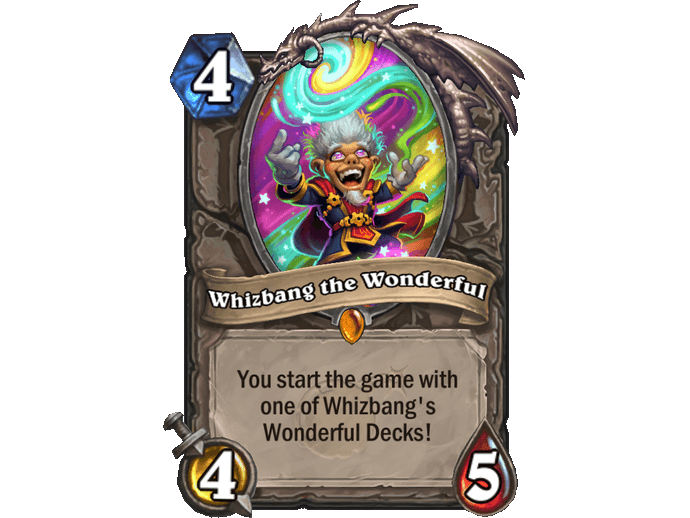 Blizzard have been working on ways to alleviate this problem. Players were recently given the ability to share decks for friendly matches, so if there’s something you really want to try out and you know someone who has those cards, you at least have a chance to do so in a match against them. But there was no way to borrow things for wider play until now. Whizbang gives players a real chance to mess around and experiment, though the randomness doesn’t help those wanting to test a specific deck.

Neither will it get you to the top of the competitive ladder – the quality of the recipes can vary wildly and even the best ones are rarely as good as other decks in the meta. But it’s still a great step for encouraging casual play, and for helping players to appreciate the huge swathe of cards that are usually ignored as people rush to craft only the best of the best. Having said that, Blizzard have banned the card from official tournaments, so perhaps they’re actually afraid of its power?

I’ll be hoping to unpack Whizbang the Wonderful when The Boomsday Project launches on Tuesday the 7th of August. You can see all the potential recipes it can pull from at sister site Metabomb.