Do you speak the old language? No, not High Valyrian, get away from me. I mean Ancient, the mysterious language of archeological adventure game Heaven’s Vault. It is very cool. The word "sky" translates to "star-place". The word for “traitor” is “person-who-does-not-truth”. That’s wonderful. Less wonderful are the game’s niggles and annoying quirks, the kind that Alice B pointed out in her Heaven’s Vault review. “The game is in desperate need of a more comprehensive fast travel system,” she said, for example. Well, happy news sci-fi history buffs. It’s got one. Sort of. It’s definitely better than what existed before.

There are sailing bits in the game where you have to float down rivers in a cloudy, pretty nebula, as you travel from one moon to another in search of wordy nuggets. But some of these routes are loooong, and the sailing isn’t anywhere near as interesting as the antiquated hieroglyphs you’re out to find. The developers at Inkle Studios have conceded that many players would rather just get on with the translating and moon-exploring.

They’ve now made it so that you can pass control of the ship to your robot companion. As you sail, you'll see a prompt in the corner of your screen: press the button to pass the wheel to your robot spy-butler, Six. At which point the screen will fade to black and you’ll arrive more quickly at your destination. However, like fast travel in other games, you can only do this if you’ve been to that place before. If you reach "unknown waters", the robot will wake you up and you'll have to sail yourself again. 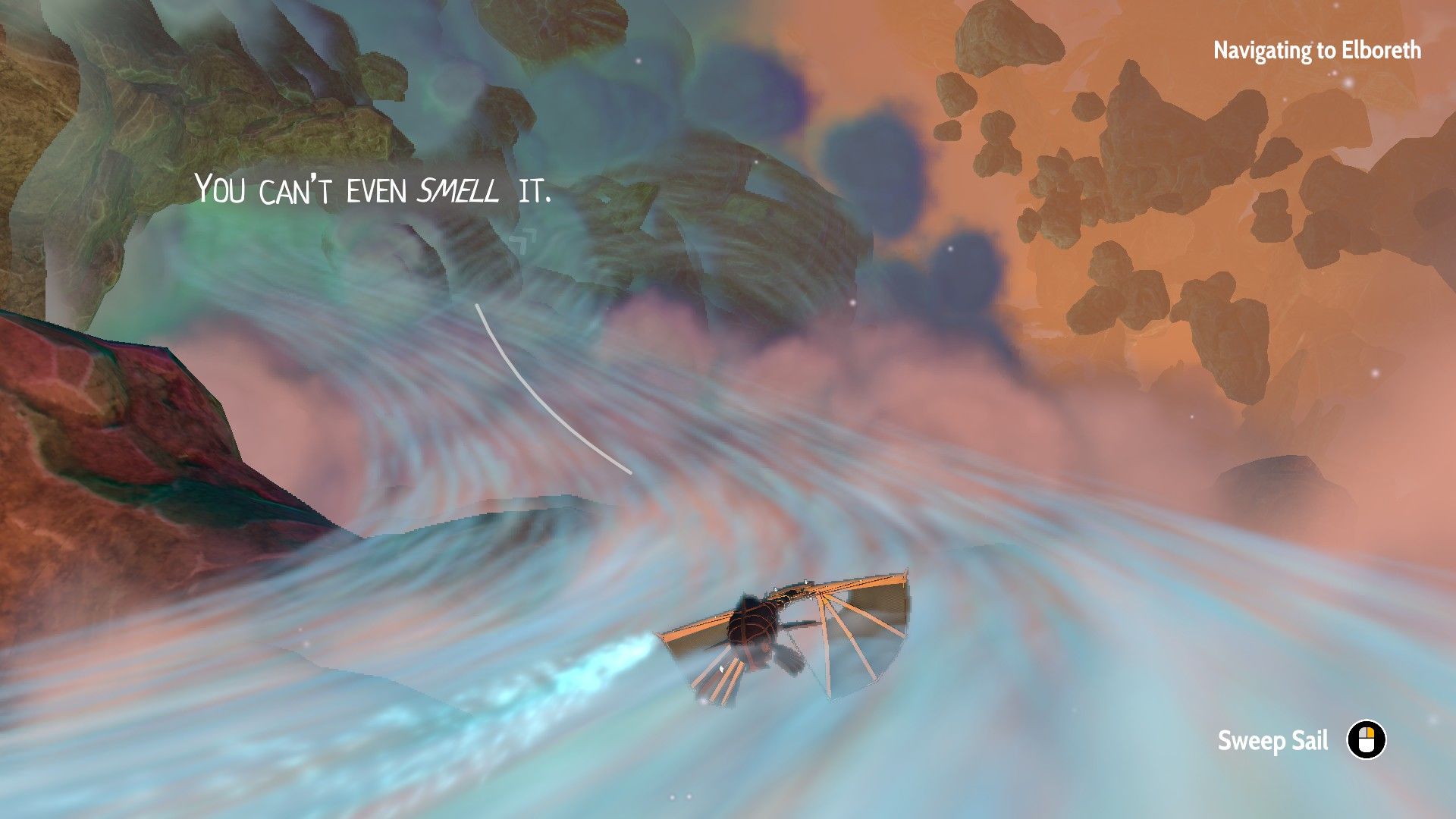 This was part of a small update on Monday that also fixed some bugs, and changed the map so it no longer obscures the exact portion of the Nebula you’re trying to look at (quite helpful). There are still flaws to this wondrous adventure. It periodically snatches control of your character from you, or does the same with the camera, in a paternalistic way I do not respect or enjoy. (I know how to walk up a small hill, mum.) And it has that Mass Effect problem of some unclear dialogue choices. Sometimes a piece of chat that seems pleasant will turn out to be a rude remark, a vague response might lead to an irreversible decision.

But but but. It is still brilliant. Despite how many times I yelled with frustration or annoyance, I am playing through it a second time. I have a real life notebook with ten pages full of otherworldly scribbles. I have extraneous pages peppered with theory and historical conjecture. I have a page dedicated to the spoken form of this language, even more mysterious and unknown than the written form (if “kis” means “king”, does “catkis” mean “king’s gate”?) Damn, it’s just so clever and good-looking, it makes me feel clever and good-looking by proxy, even though I got a C in French and look like a homeless Jason Biggs. The word for a "book" in Ancient is "thing-of-knowledge". The word for “word” is something like: “thing-spoken-without-speaking”. And, ugh, if that doesn’t make you want to immediately download this game and decipher an ancient lingo, then get out of my news post.