Hitchiker: the colours of Firewatch, the zen roadtrip calm of Truck Simulator, the addled homespun wisdom of that sarsaparilla-loving barfly from The Big Lebowski and the abstract underworld uncertainty of Twin Peaks' supernatural side. Also, an awful lot of raisins. Basically, it's somehow identified all the aesthetics that most please me (raisins excepted) and bundled them together into a cars'n'conversation odyssey that is equal parts charming and terrifying.

The first of several planned parts, each of which sees you hitching a ride with a different driver, is out today. Your travelling companion for this first ride, still officially deemed a prototype but available as a Humble Original right now, is a honey-voiced raisin farmer in no hurry to get anywhere but with a whole lot of secrets to share. It's rather special, despite a few shortcomings.

There's much I can't say about what goes down during this hour-odd trip through an orange-hued tract of rural America (or is it?) - its events are absolutely ones you should discover for yourself. At the same time, there's not that much I could spoil - it's big on unsettling questions but short on clear answers, which is where the Twin Peaks comparisons most come to bear.

So, all I'll say is that the setup - you, a young man with a backpack and no particular place to go, hitch a ride with an older farmer who seems keen to chat about his life - gradually morphs into something first creepy and then more metaphysical. Mysteries are introduced, existential questions are posed, and the crows are not what they seem. Neither are the raisins, for that matter. You should definitely steer clear of this game if dried fruit makes you uncomfortable.

For me, the more dream-like and mystery-box aspect of Hitchhiker was a little less compelling than simply spending time with this first episode's driver. He's an avuncular fellow on the surface, but there's an edge of unspoken menace. Not that he might do something awful, but more that he is very much pulling the strings of this encounter. That he knows far too much about you - and again, not in terms of secrets (though perhaps he does), but in terms of who you are.

And here's where, I felt, The Hitchhiker does a smart job of finding something universal. The player-character is someone with a story, but it's kept loose enough and vague enough that it fairly comfortably wraps around anyone's story. Either there's something (or someone) you want to run away from or something (or someone) you want to run to. The Driver knows this. He knows this about you. He understands. He also judges, but just a little bit. 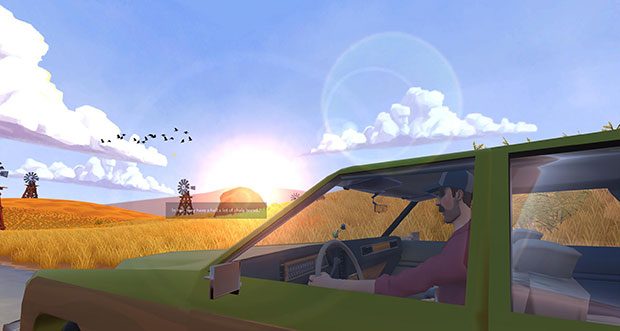 There is a sense that I'm trapped in this car with this dude and the giant box of raisins he keeps on the seat between us. I am trapped, in terms of the game not offering any option to open the door and get out, but really that sense comes from feeling that there is no way whatsoever I could leave until I know what this guy's deal is. And how much of it is my own deal too. Also, jeez, what the hell is up with all those circling birds?

Mechanically, Hitchhiker is extremely simple. Think of it as akin to something like Firewatch, but you can't move - only look around you. You get to pick from a handful of conversation options whenever the Driver asks you a direct question, you can open the window whenever you want and, later, it's up to you how many raisins you can eat. That's about it, bar a couple of things I can't reveal.

Lest that sound too limited, well, I don't know about you, but if I take a lift in someone else's car, I don't start rummaging through the glovebox, grabbing the wheel or clawing at the dash and shrieking like a cheerleader. This is, for all the metaphysical mystery elements, a hitchhiking simulator, not a driving simulator. I like this ambience - both because I can turn to stare out the window and admire the light and the fields and jeez, what a lot of birds, and also because it's a rare evocation of the boredom of long journeys, plus the sheer awkwardness of travelling with a stranger who doesn't come from the same world as you. (I.e. generationally or culturally, not that he's an alien. Pretty sure that's not where they're going).

To some extent, you just have to suffer through his shaggy dog stories and bullshit homespun wisdom, while wondering idly how much arsenic he injected into those raisins. I'd have liked a few more conversation options, or even better, the option to do low-level passive aggressive stuff like turn the radio on or off, nod-off during an anecdote or demand far too many roadside wees, but hell, I get that this would have disrupted the focus Hitchhiker wants to achieve. 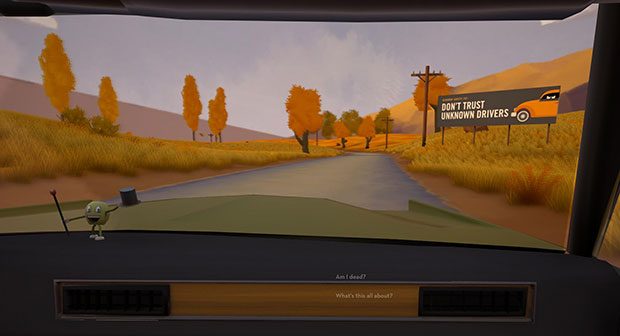 Here's my problem with Hitchhiker, though. One of the things is does it have elements of the scene outside your window repeat - the same signs, barns and circling birds - in a way that could be deliberately designed to evoke unreality, or the projected, looped exteriors of studio-bound driving scenes in old movies. Or it could simply be a limitation of budget; after all, building enough unique art assets for an hour of driving is a tall order. The trouble is that I don't know.

In a Lynch movie, which this owes more than a little to even if, by and large, it's a lot more on-the-nose, you can pretty much take it as given that anything odd or disruptive you see is in there because ol'Davey liked the look or feel of it. Here, the limited budget is a little bit obvious - it's very pretty, but you can tell - and so I just can't separate intent from necessary evil. Same goes for the way the Driver's mouth is not animated, let alone synced with the dialogue. Is it to create a dreamlike feel, or is a corner cut because it had to be?

I mentioned too that Hitchhiker can be a little too obvious about its strangeness and sinisterness. There are, for instance, roadside signs which advise travellers not to trust unknown drivers, while, if you root around your seat, you can find a couple of handwritten signs offering warnings. It's all a bit 'yeah, got that, thanks' - the guy clearly knows too much, clearly has some kind of agenda, and overt messages to that effect are thus needless.

His Sam Elliot narration is a little too one-note for my tastes too. I get what it's trying to be, which is to cloak his knowledge and his intent under a veil of Midwestern warmth. The performance is good, but he always sounds the same. A little burst of coldness in his voice there or a sudden sharper focus amidst the self-effacement and bon mots would have achieved far more effective anxiety than the blatant signs and messages do.

But hell, I enjoyed the ride. The Driver gets a few great lines, there are some shocks and surprises and I can't think of anything else that manages to make raisins sinister. Also, I'm a sucker for road-set Americana - this can slot between the zone-out idleness of American Truck Simulator and the theatrical introspection of Kentucky Route Zero. This first ride is a little bit uneven, but I'll definitely be along for the rest of the journey. Other drivers with different voices in different places, and hopefully new and subtler ways of making me feel as though I'm somewhere I'm not quite supposed to be.

The 'First Ride' episode of Hitchhiker, also deemed to be a 'prototype', is out now, currently only available as a Humble Original, part of the latest monthly bundle.