As part of this avalanche of Paradox Interactive material today, you'll be excited to hear that the hyper-specific bread and butter of their strategy games, Crusader Kings II, is getting an expansion born of pure hellfire. The Holy Fury add-on will be changing the way crusades are waged, from starting in a randomly generated map to raiding something called "Pagan Warrior Lodges" to using special powers to antagonize or control your neighbors. Exactly as Jesus would have wanted.

“One heart and one soul against the Christian name.” So went the message from Estonia after the routing of the Teuton invaders at Umera. The fires of faith burn hot, as local gods come under attack from a universal church that offers a stark choice - God or the Sword?

I'm so bad at history that this part of the press release sounds like nonsense words to me. Totally in on being mad at god, though. Or is that not what's happening? Ugh. Get thee to a Wikipedia.

In Holy Fury, Pagan rulers who reform their religion instead of converting will have a chance to design that new Reformed Paganism. A religion of peace or one of war? Will you be guided by the stars or bow to the whims of bloodthirsty gods? Who will lead this new church? Build a new creed on the ashes of the old ways.

Hell yeahhhhh paganism. Again, not totally sure what Reform Paganism is? I assume that's when we all watch The Craft together? Please, no matter what I do, no one bind me.

Check out that there dang anti-god trailer below:

Starting to notice that PDXCon 2018 is including a lot of trailers that don't show a single frame of games in action. Except for Wonderworld: Planets! That had some bugs with green bug juice in it. That was a lot better than a helmet that slowly comes into frame. Sorry if that feels like a nit-pick. 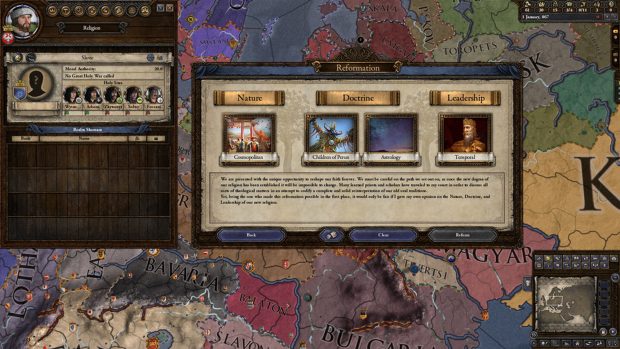 Also. ALSO. There's a Kickstarter for a board game adaptation of Crusader Kings. First, I imagine this is the most complicated tabletop setup of all time. Second, it was just announced and already it has doubled its funding goal. It's good that all of us strategy nuts are just. this. predictable.

*sprints toward kickstarter while throwing my wallet repeatedly*