If you click on a link and make a purchase we may receive a small commission. Read our editorial policy.
This is The Mechanic, where Alex Wiltshire invites developers to discuss the difficult journeys they’ve taken to make their games. This time, Guild Wars 2 [official site].

Every MMO has to have a mount. Mounts are a reward, a step in the endgame that helps you feel like you’ve finally mastered an MMO’s world. Finally you can get around quickly. No more of that plebeian walking. And with the game feeling like it’s in your grasp at last, you even get to show off your achievement with the flamboyance of your steed.

Guild Wars 2’s mounts are the best mounts in the MMO business. They’re beautiful to look at, they do interesting things, and they feel so good to control. And here’s the thing: they’re inspired by Metroid and Zelda. 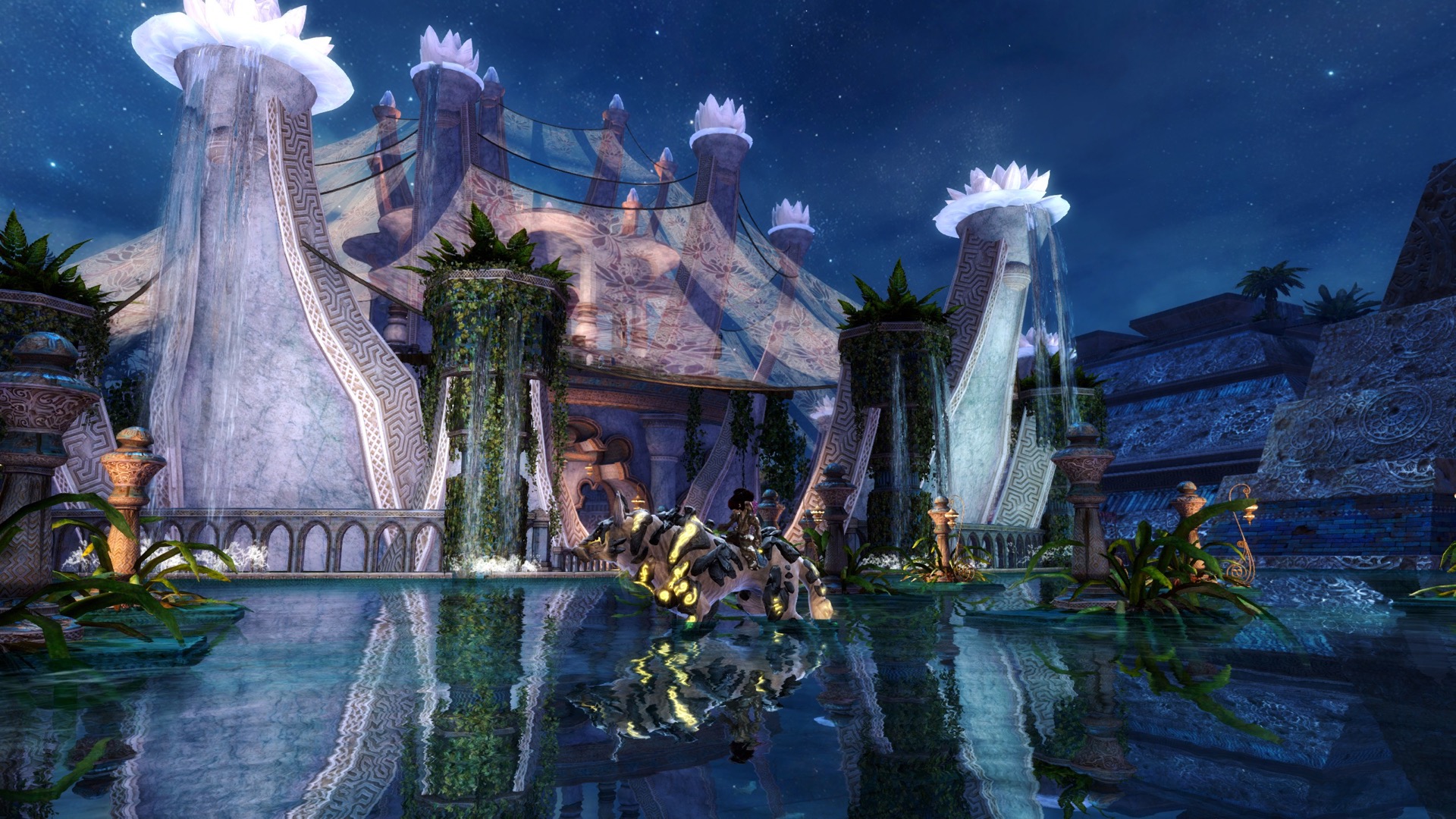 Mounts didn’t arrive in Guild Wars 2 until its Path Of Fire expansion, which was released in 2017, five years after the game first launched. In fact, there was no plan for mounts during the original development of the game. The team instead wanted to base travel on its waypoint system, which allows you to warp to any waypoints you’ve discovered. Mounts, the team figured, would undermine the way waypoints encourage exploration -- and besides, they designed the entire world around waypoints, so why add mounts?

But then they started making Heart Of Thorns. This was Guild Wars 2’s first expansion, and its new zones included two new ways to move around them: jumping mushrooms and gliding. 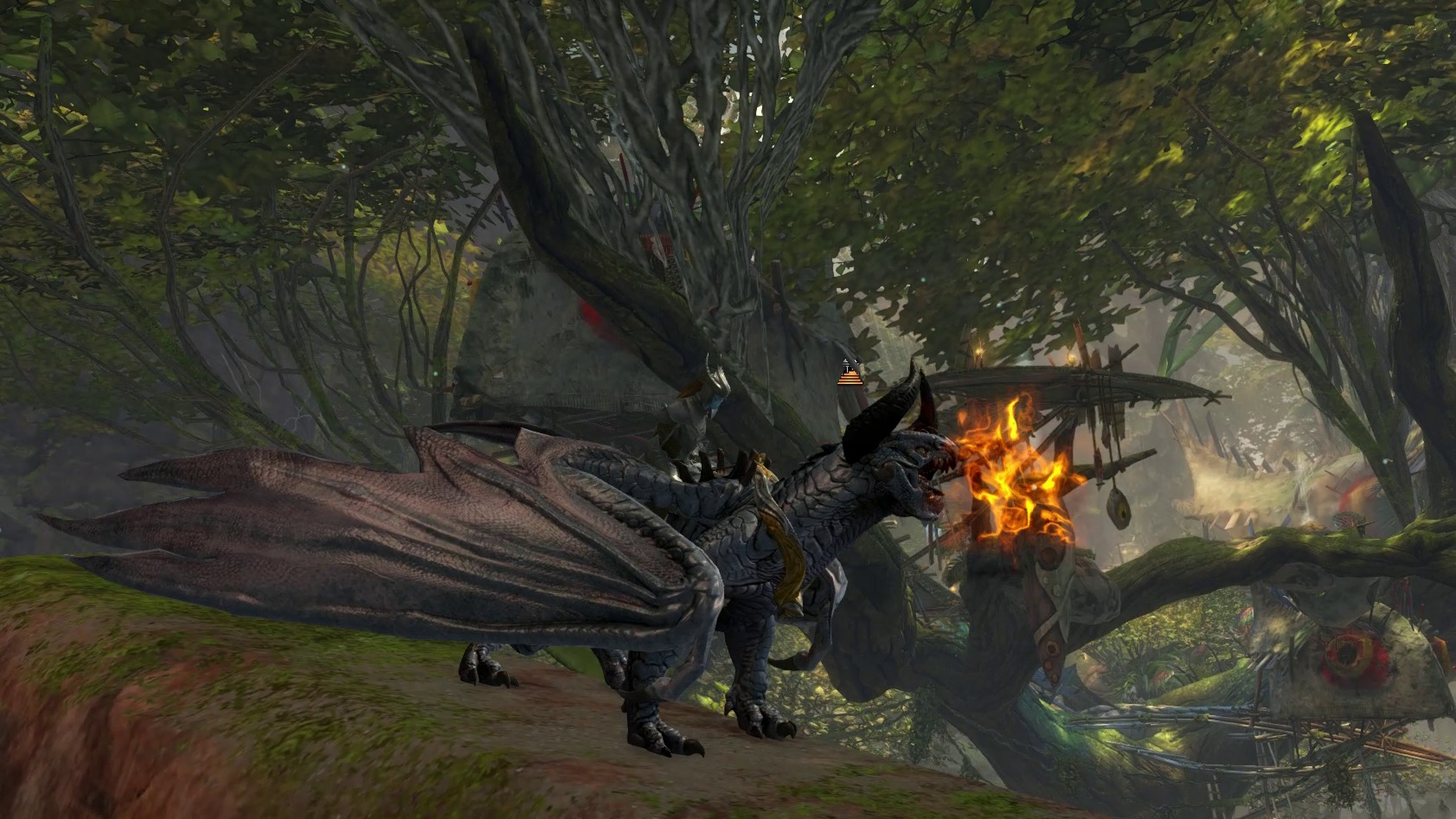 “The idea was that people are into games like Metroid, so how do we get players to come back to a map and see things that they didn’t see before?” programmer Joel Helmich tells me. Once players had earned the relevant Masteries for gliding and bouncing off mushroom jumppads, they’d be able to revisit zones and get to locations that were previously out of reach.

Guild Wars 2 has always been filled with gamey distractions and pursuits, and gliding and bouncing were absolutely part of that tradition. But the team sensed they could be something bigger. “In Heart Of Thorns these random things felt scattershot,” says Helmich. “Could we make them feel more unified?” 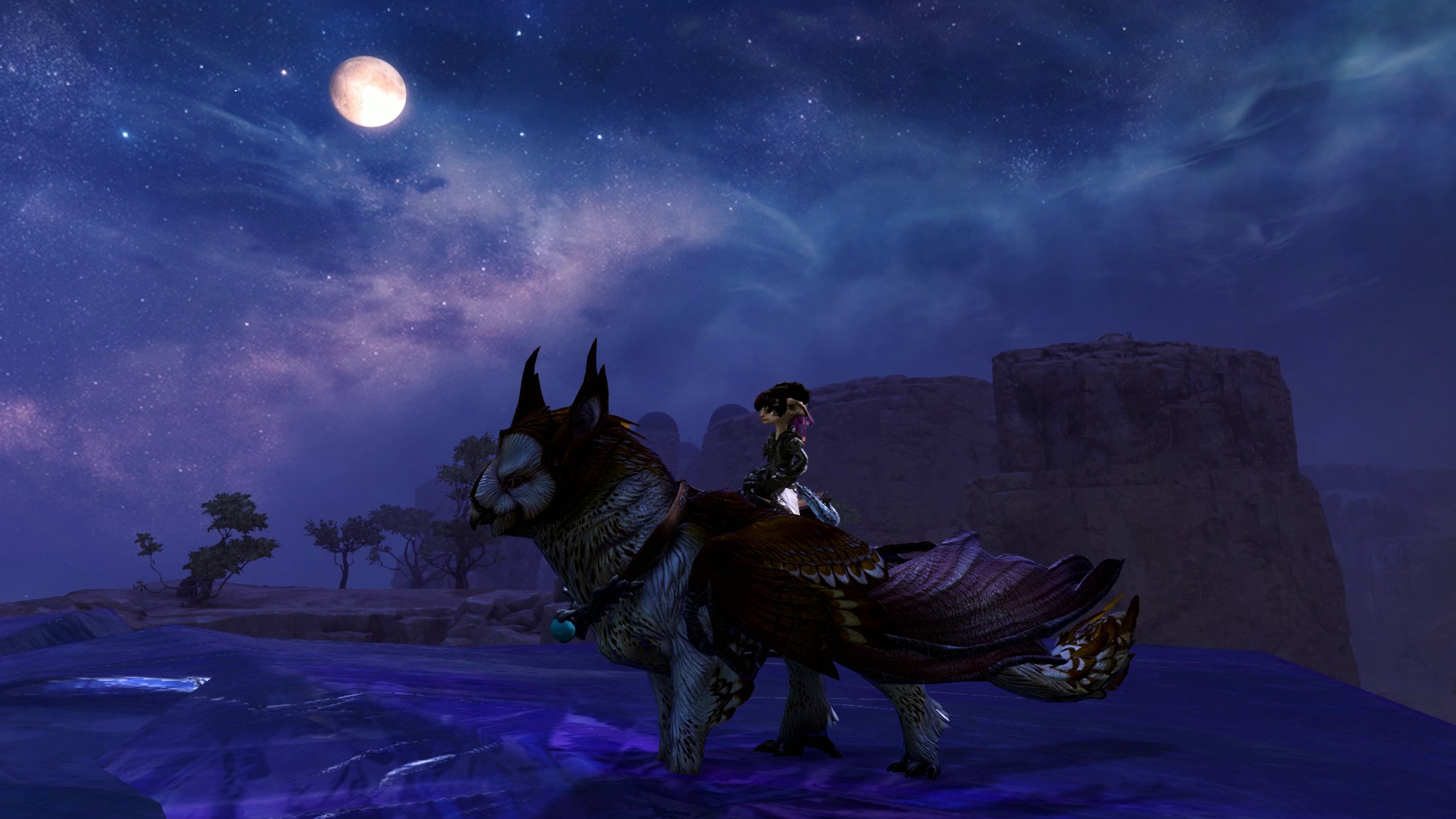 The mushrooms were a natural extension of the jumping puzzles which have been in the game since the start. But the gliding, served by diaphanous wings and updrafts strategically placed around Heart Of Thorns’ zones, introduced something new: a pleasure in controlling movement, and it inspired an approach for mounts that’d give them a very different role to the one they take in other MMOs.

“We realised they wouldn’t just be about movement speed, they’d be tools that can traverse differently, so when you look at any mountainside or house or other props in the environment, they become puzzles about getting on top of them,” says game director Mike Zadorojny. And so, when Arenanet began developing the Path Of Fire expansion in early 2016, mounts were there from the start.

“It was way bigger than we anticipated,” says Zadorojny.

A huge issue was that that each mount was meant to perform a special trick. This trick would, like a hookshot in Zelda or the Shinespark in Metroid, allow you to traverse a specific kind of terrain that’d be designed into Path Of Fire’s new zones. 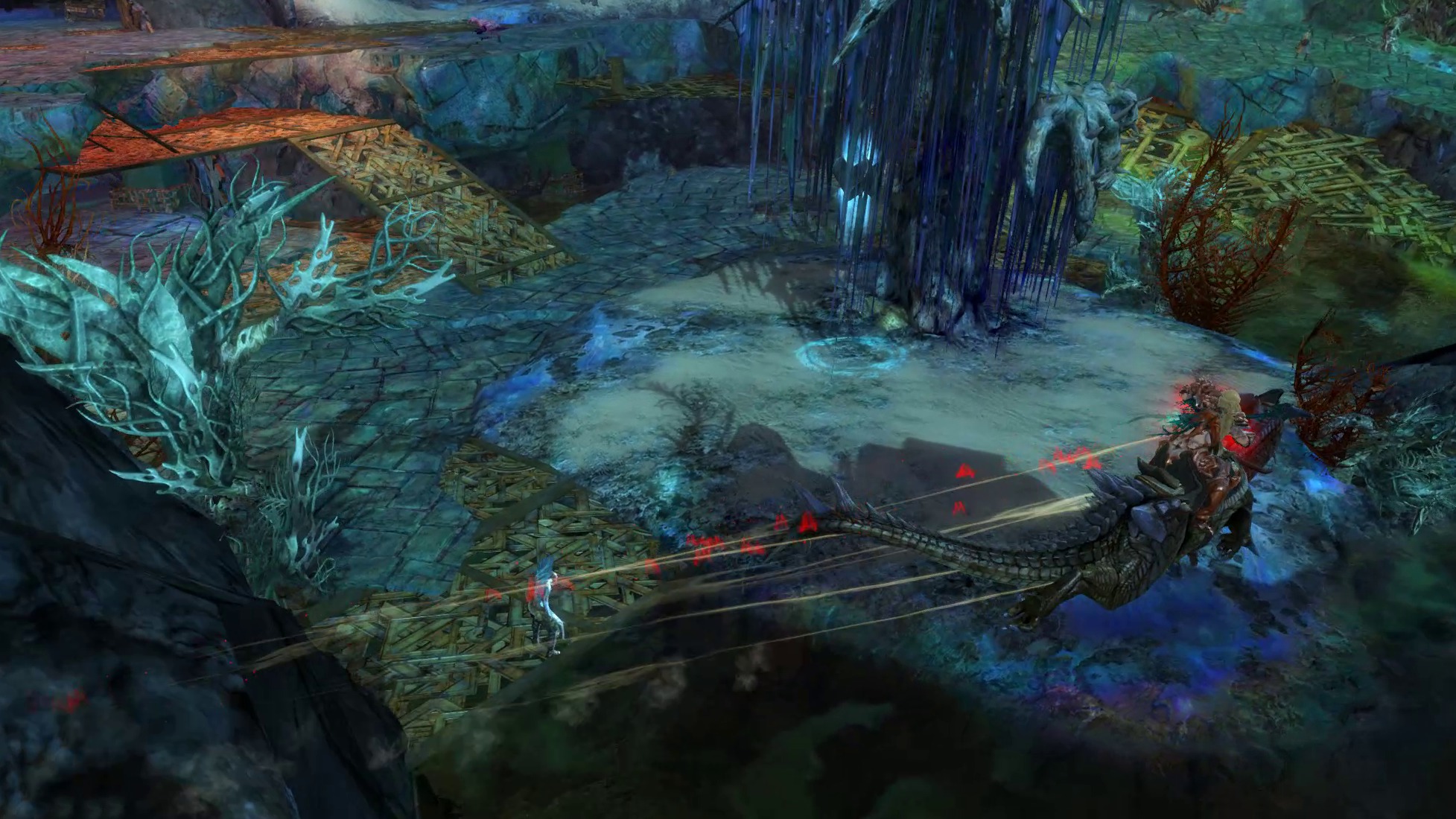 But only one of the mounts abilities was defined early on: the Raptor. “Conceptually, it’s always been a thing that jumps over canyons,” explains Helmich. But others took a lot longer to come into close focus, meaning that the environment artists had to wait before they could design zones tailored to their specific abilities.

“The Springer was one that we generally had a good idea for,” says Zadorojny.

“Ish,” says Helmich. ”Once we knew it was a giant rabbit. It started life as a frog or something. We didn’t really have a good concept of it.” This weird but rather delightful rabbit-thing jumps vertically upwards, but it was first intended to scale cliffs rather than simply leap up them. 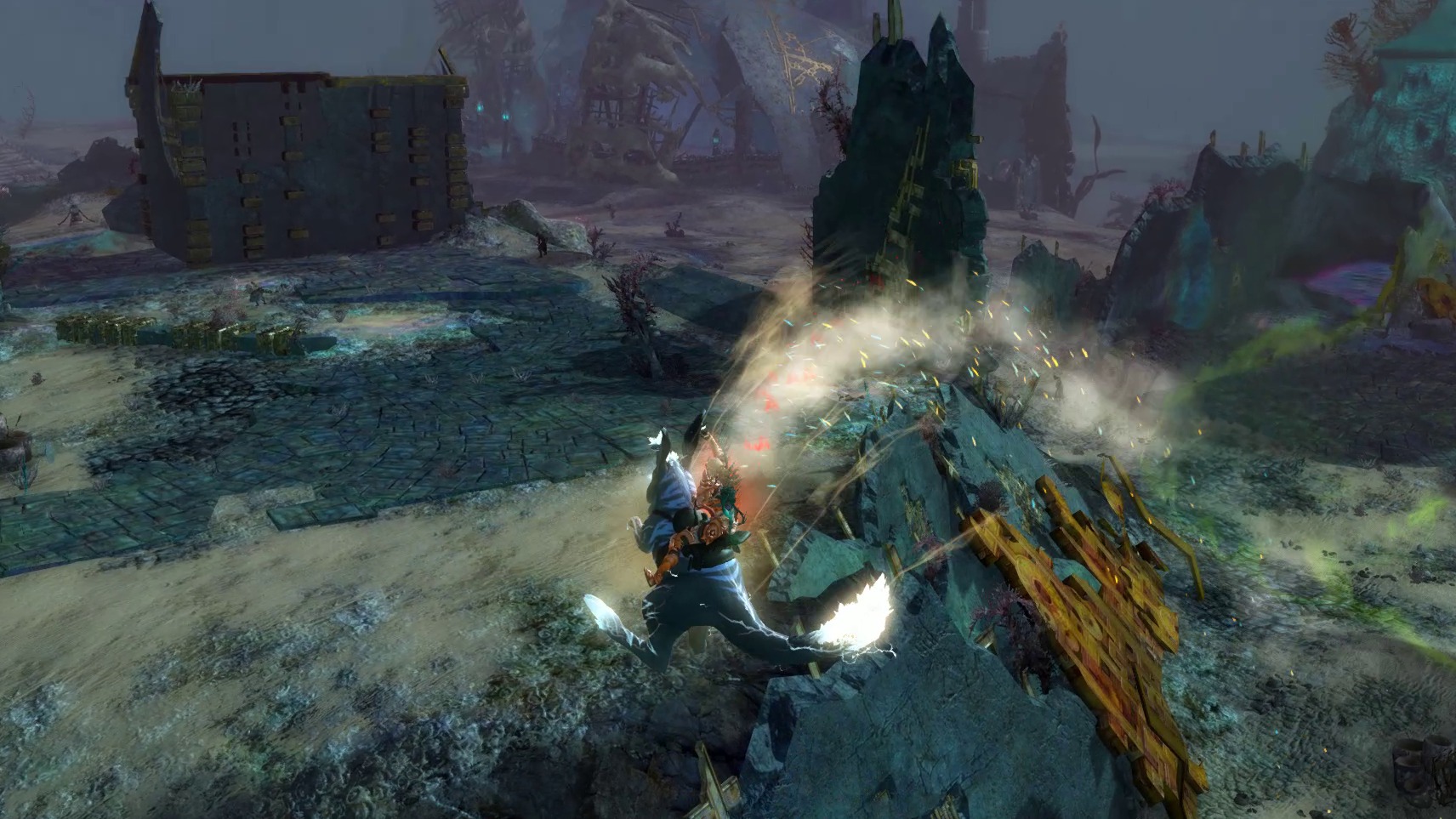 “For some mounts we started with the movement mechanic we wanted and tried to figure out what natural or fantasy creature would attest to it,” says Zadorojny. So that explains the Skimmer, a hovering manta ray that lets you cross water and poisonous bogs.

And then there’s the Jackal, which lets you make up to two instant teleport dashes and can also access Sand Portals that are found throughout Path of Fire’s zones. But it took a long time to take this role. For a start, it was originally going to be a huge mount that could seat several players at once.

“But we after prototyped it, it was going to be fairly hard to make it look convincing with the tools we had, and we were concerned about people parking on vendors with a giant mount so you couldn’t see them,” says Helmich. 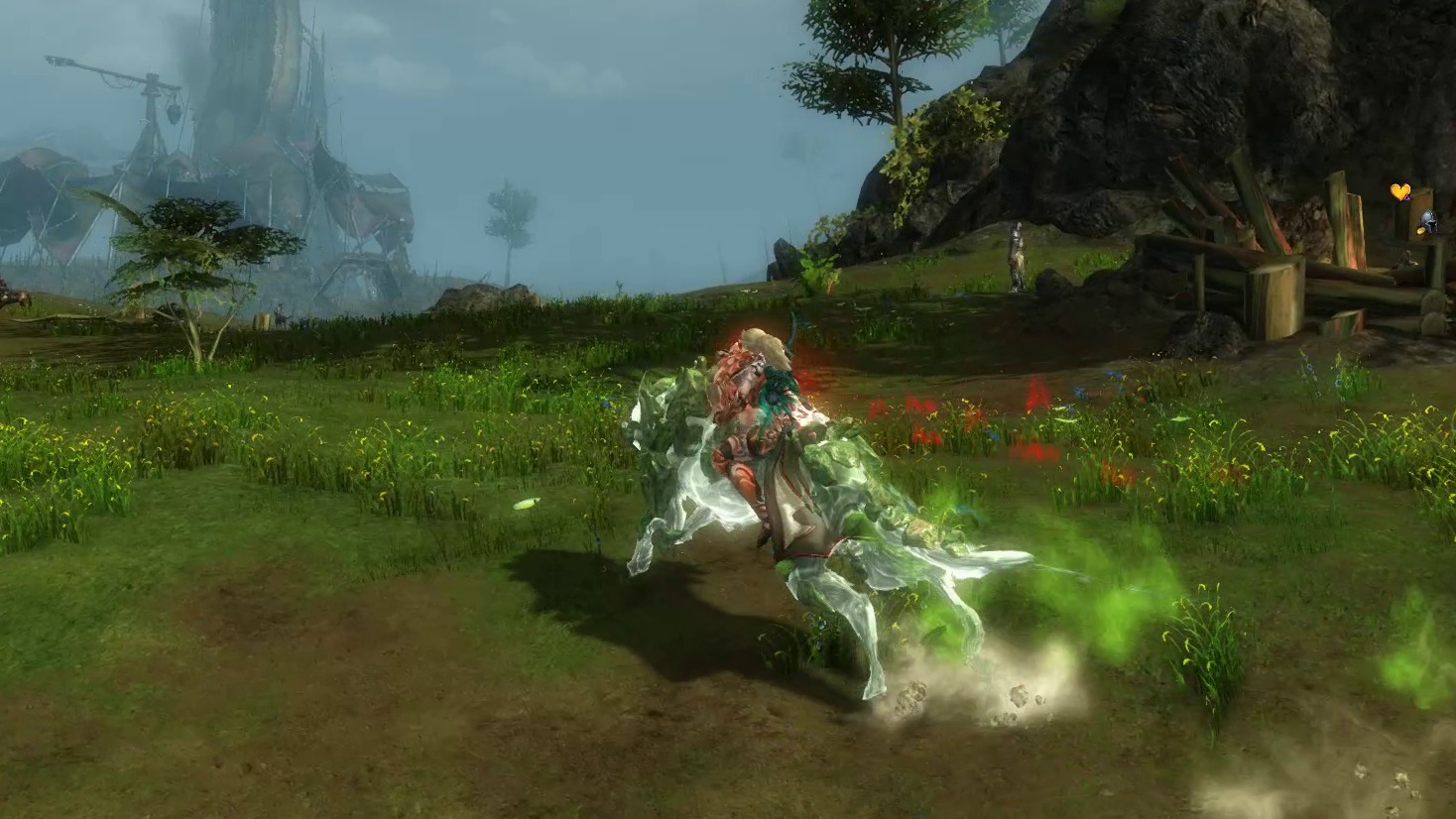 What’s more, though the team liked its communal nature, the behemoth didn’t perform the lock-and-key function that the other mounts did. So they re-thought it, looking toward the deserts which make up many of Path Of Fire’s zones. It could do some kind of … sand thing. “Maybe you could form a train of Jackals and get this sand train?” says Helmich. ”We had dumb ideas.”

There’s also the Roller Beetle, a giant dung beetle which steadily builds up huge speed across the ground, if you can avoid hitting obstacles. The inspirations for some of mounts aren’t exactly obvious: “It was about how we could combine a podracer and a drift car, and we went from there,” says Helmich. But the point of the Roller Beetle is that it enables point-to-point races. 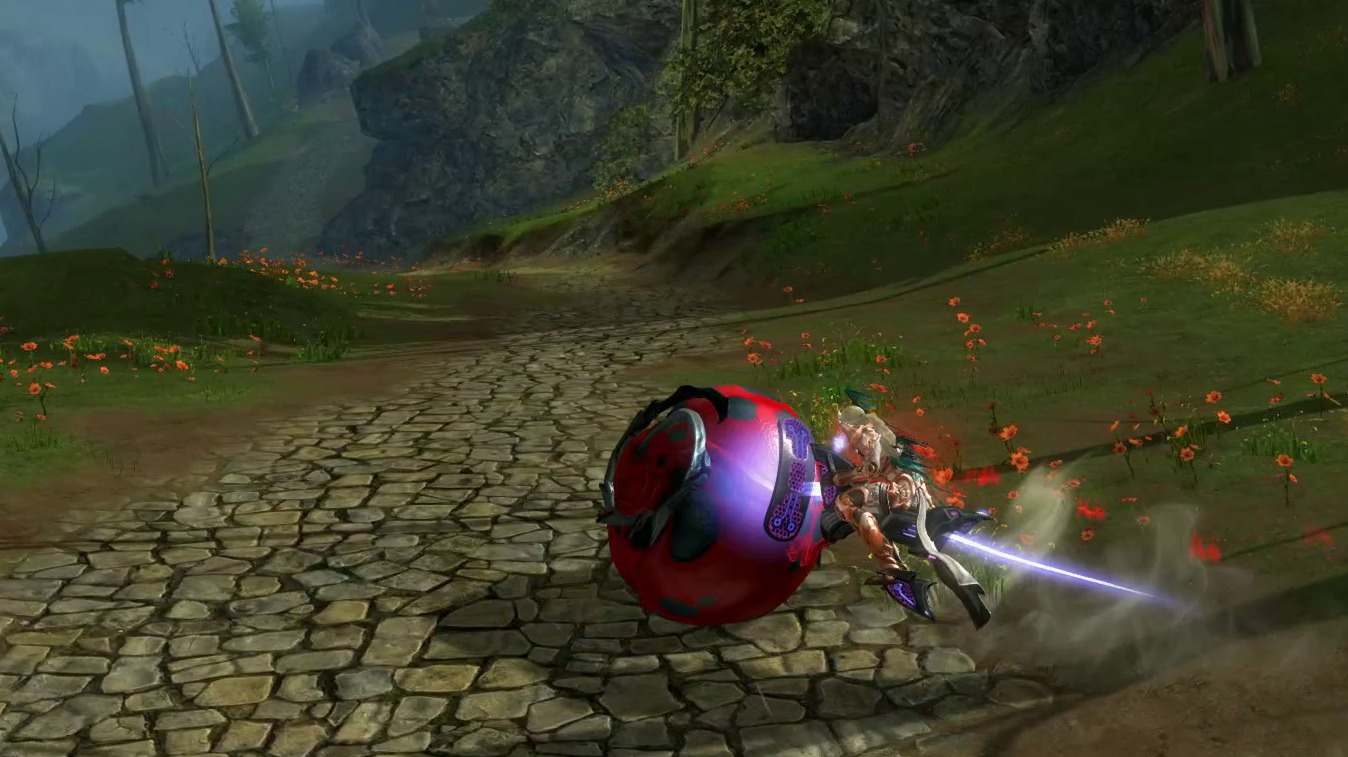 The last of Guild Wars 2’s main mounts is the Griffon, an owl-faced flier which can make a couple of flaps and then gently glides downwards. A highlight of the roster, it looks fantastic and feels great to control, especially in Path Of Fire’s more vertiginous zones -- but it nearly didn’t make it into the game at all.

The initial problem with the Griffon was that there didn’t seem to be much of a role for it. If it could briefly fly, perhaps there could be environmental puzzles with blocked ledges, giving the Griffon the task of flapping around the impediment? “But it really wasn’t that different from the Raptor,” says Helmich. “If there was any way we could shave some development time off and put it into something else, we’d take it, so for a while the Griffon was at risk of being cut.”

Then Helmich got his hands on it. He imagined giving the Griffon the properties of a wingsuit, so you could dive to gain speed and then pull up, but the tech didn’t exist to support such an idea. “So I worked a couple of late nights and I made it work. And I showed people and they said it was rad.” 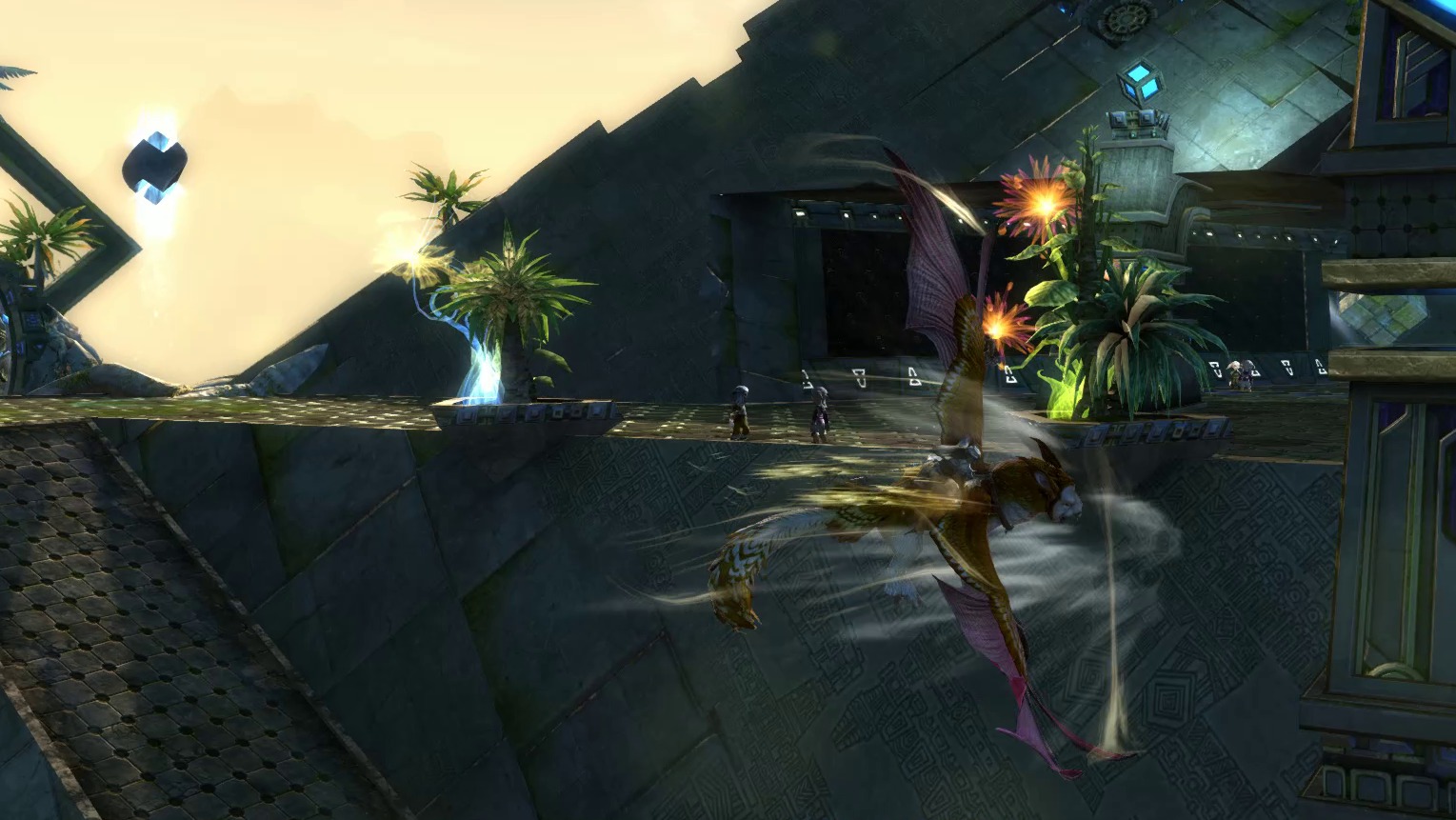 And the Griffon is indeed rad -- and the result of a lot of problem-solving. Most of the systems that underpin it had to be added on top of what already existed in the game. “There are all kinds of things that the mounts need to do that we didn’t have systems for,” says Helmich.

There are systems which raise and lower your mount’s pitch, depending on the speed it’s going. In the case of the Griffon, which was meant to be able to dive and swoop, Helmich ditched controllable pitch in favour of buttons which pitch you fully down and fully up. He realised that when you’re pointed straight up or down it’s very hard to see where you’re going. The additional controls make the Griffon a swooping mass of feathers and muscle which takes skill to keep in the air.

Helmich also had to write a new network lag correction system for the mounts, to counter their size and speed. The usual one, which simply snaps a player into the correct location when actual information on their location arrives, looked terrible, because it’d suddenly warp these big beasts across the screen. 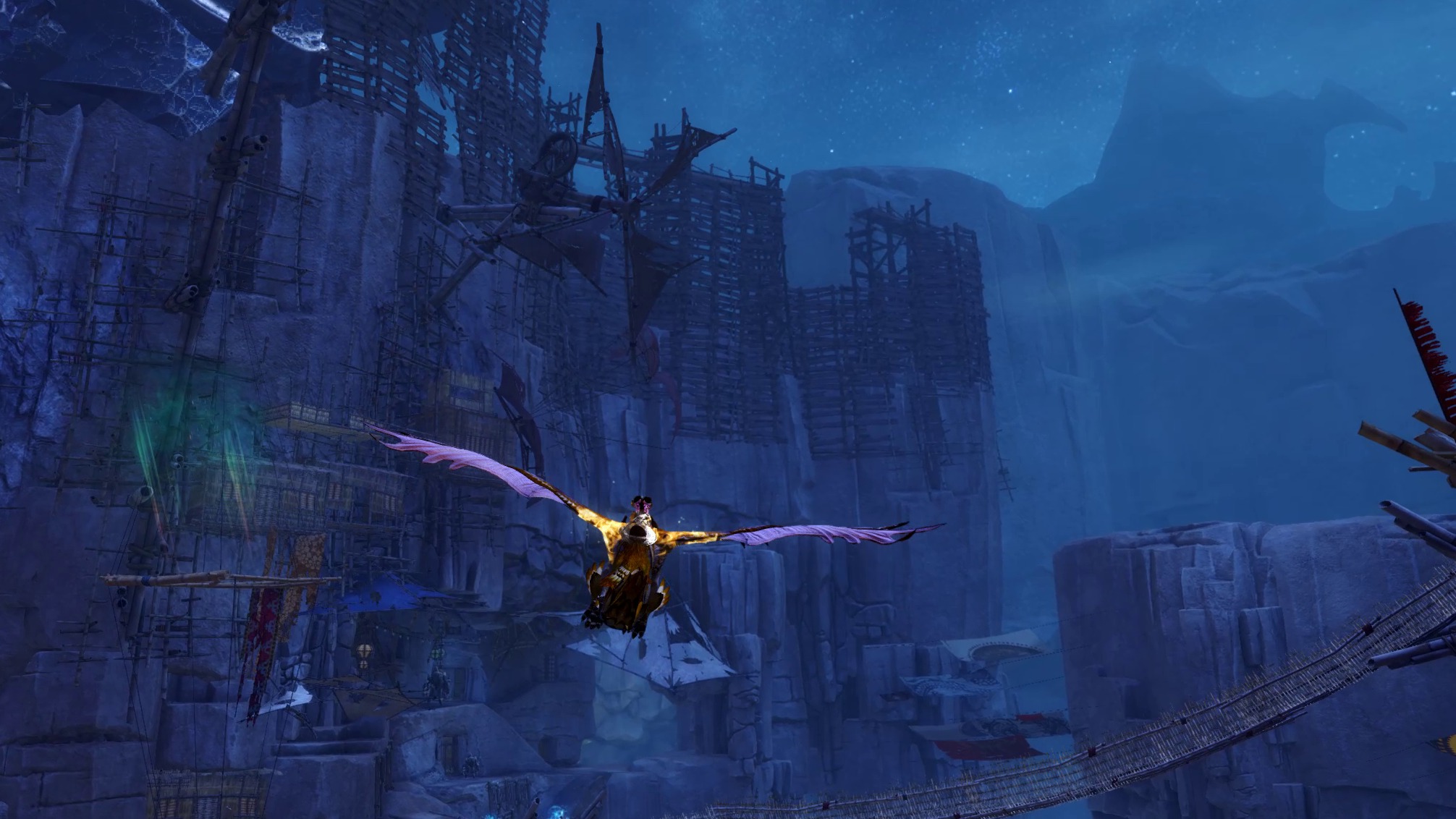 The original game didn’t even have a system to govern acceleration, since your avatar begins moving at top speed immediately. For your avatar, that’s fine: its apparent weight is communicated through animation, which is effective because it’s generally small on the screen and you’re not moving fast. “The mounts, though, are so big and they move so fast that it felt wrong for them to instantly accelerate. Lesser implementations of mounts often suddenly move at full speed, and we’re like, nah, we want it to feel weightier.”

“We wanted them to feel like actual creatures, so their believability was very important,” adds Zadorojny. “So a lot of the flourishes in the movement mechanics and idle animations are really important to us, because that’s where we sell it to players.” 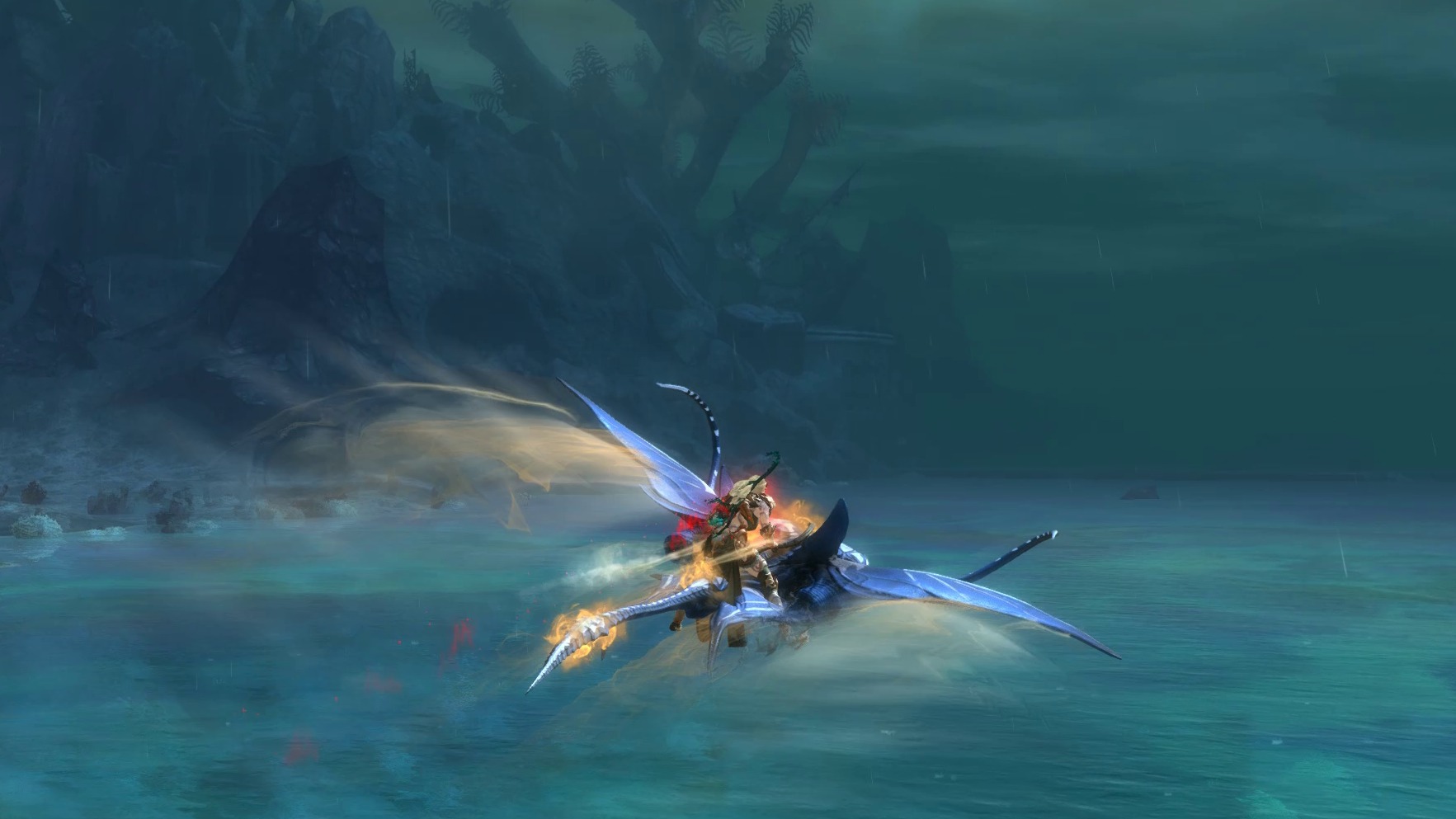 So Helmich and his team wrote a blend tree system, which can dynamically mix animations together, raising and lowering the proportion of one over another so it moves naturally and never is seen to snap between motion. It’s a big reason why the Griffon looks so great as you manoeuvre it around. “And when you’re climbing really fast and how far it banks over as you turn, and the way it pitches up and down,” says Helmich.

The game couldn’t even stick a player’s avatar on a mount until a system was built to attach the two models together. Making mounts happen, it turns out, is a big deal. But the additional tech that Arenanet had to build for them has led to improvements elsewhere. Because it’s possible to attach things to other things, a couple of boss monsters can now grab players, spiders can swarm on to faces, and players could finally sit on chairs.

And so mounts, through the systems that enable them and the environmental obstacles and features that give them reason to exist, have found their way into every corner of the game.