Cast your eye over our best gaming keyboard list and you'll find most, if not all, of my top mechanical picks are based around Cherry's excellent MX switches. That's probably not surprising given that Cherry are one of the biggest and most reliable names in keyboard circles, but HyperX's new Alloy FPS RGB makes a strong case for trying something a little bit different to the usual sea of Cherry reds, blues and browns - specifically, Kailh's silver speed switches.

Not only are they much quieter than your typical Cherry switch, but their short travel distances make them feel really quite nippy, making the HyperX Alloy FPS RGB one of my favourite gaming keyboards to date.

In truth, Kailh's silver speed switches aren't a million miles away from Cherry's own speed silvers (see what they did there?), which I tested on the MSI Vigor GK80. They're still what keyboard enthusiasts would describe as 'linear' switches, giving you that short, sharp, straight down feel when pressed as opposed to the slightly bumpy middle section you get on 'tactile' switches, but Kailh's have an even shorter actuation distance (where the keyboard registers it's actually been pressed) of just 1.1mm, making them a touch faster overall. Not by much, all told, as Cherry's actuate at 1.2mm, but when you combine that with an operating force of just 40g compared to Cherry's 45g, Kailh's silvers feel just that teensy bit nimbler under your fingers.

They're a great companion for fast-paced shooters like Doom, for example, and that all-important space bar dodge felt wonderfully responsive when I was trying to evade the jaws of giant dinosaurs in Monster Hunter: World, too. Admittedly, I was surprised by how much l came to like Kailh's silver switches, as I didn't much care for Cherry's interpretation when I tested them on the MSI. They were perfectly fine for playing games, but I found they made general typing feel a bit too floaty for my liking, and I was never really that confident that I'd pressed each key correctly.

There's a lingering sense of that on the Alloy FPS RGB, too, as even now, weeks after I started using the thing, I'm still making my fair share of mistakes. Perhaps I'm just a particularly heavy-handed typist, but the fact you don't need much force to press them down does mean it's very easy to accidentally hit the key next door as well when typing at speed. It's not like I'm making errors every second or third keystroke or anything, but normally I would acclimatized myself to a keyboard by now, making me a little wary of recommending it for general office work. And yet for some reason this doesn't bother me nearly as much here as it did on the MSI.

Perhaps it's because I much prefer the HyperX Alloy FPS RGB's overall design, making it a more appealing prospect to have on my desk than MSI's slightly weird bronze concoction. It's a full-sized keyboard that's both tasteful and delightfully compact, its single HyperX logo sitting neatly in the top right corner next to a trio of small LEDs indicating your caps and number lock along with its dedicated game mode.

Its steel frame and rounded-off corners also look and feel every bit like a £100 / $100 keyboard, as does its detachable, braided USB cable. You also get USB passthrough on the Alloy FPS RGB, although annoyingly it's only for charging your phone instead of connecting up to your mouse.

Still, it's a small niggle in the grand scheme of things, especially in the face of HyperX's enduringly awful NGenuity software, which seems to have shown no improvement in overall usability since it first came into being alongside their Pulsefire Surge mouse. With its confusing, many-layered menus and cluttered UI, it's by far one of the most unintuitive and frustrating bits of keyboard software I've ever used - which is annoying when it's actually pretty damn useful.

The RGB options are pretty standard as far as gaming keyboards go, letting you assign different effects or your own lighting zones to various sections of the board, but its macro options give you (quite literally) almost mouse-like levels of control over what each key can actually do. As well as recording your own macros for games, you can also assign any key you like to open folders, programmes and URLs, act as multimedia keys, Windows shortcuts and other keyboard bindings, as well as (you guessed it) actual mouse functions, making it arguably one of the most accessible keyboards I've ever seen.

The Alloy FPS RGB's game mode is equally flexible, too. Activated by hitting Fn and F12, this lets you disable any key you please, as well as a handful of combos such as Alt Tab, Alt F4, Shift Tab and Ctrl Esc. All you need to do is highlight the ones you want to turn off in NGenuity's keyboard diagram, and voila. Job done. Throw in the ability to create up to three profiles as well, and the Alloy FPS RGB is a surprisingly versatile bit of kit - provided you haven't already snapped it in two over your kneecap because NGenuity has driven you into a blind rage, that is. 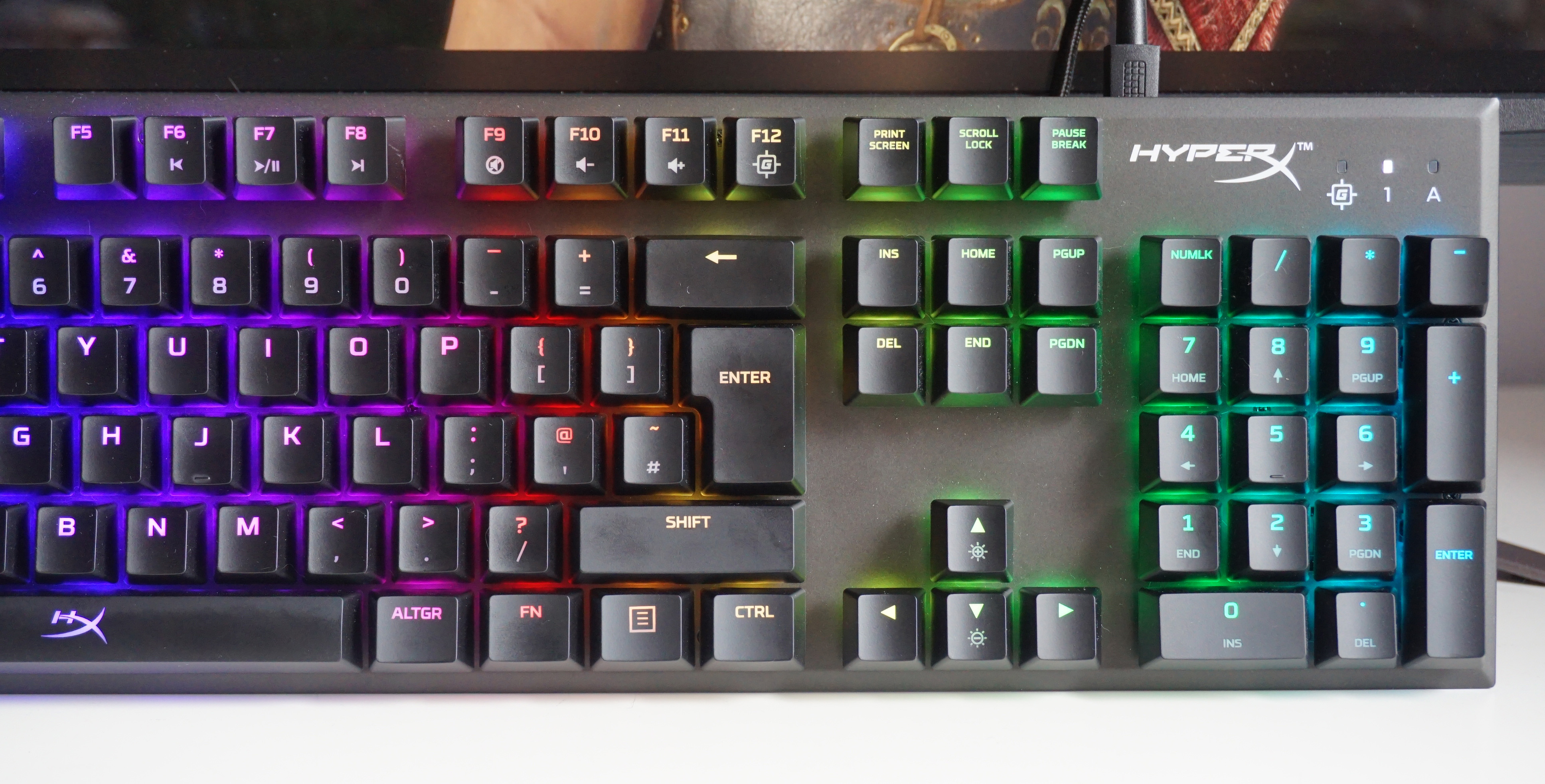 Still, most people can probably get away without having to deal with NGenuity for the most part, which just leaves us with a very good gaming keyboard. While I still have a few reservations over its suitability for everyday typing, I much prefer its quick and responsive Kailh switches to their Cherry rivals over on the MSI Vigor GK80, and they won't burst your eardrums with their CLACKY CLACKS either.

If only its USB port wasn't limited to just phone charging. If I could stick my mouse in it (and not feel a burning rage every time I opened NGenuity), the Alloy FPS RGB would be a serious contender for muscling in on the £120 / $130 Fnatic Streak's best gaming keyboard crown. As it stands, though, the Streak still strikes the best balance between gaming and general typing in my books, and you also get the added bonus of proper USB passthrough, a volume roller and dedicated media keys. As much as I like the Alloy FPS RGB and its Kailh switches, for me the Streak and its Cherry MX browns still reign supreme.