The HyperX Pulsefire Surge has had a bit of a rocky ride to shop shelves. You might have caught a brief glimpse of it earlier in the year before it was pulled due to a fault in the design of the two main click buttons coming too close together, but now it's back, retooled and ready for action in all its rainbow LED glory. Let's see whether it's been worth the wait and whether it deserves a place on our best gaming mouse list.

As gaming mice go, the Pulsefire Surge is pretty petite. Measuring just 120x63x41mm, this is a small mouse even for someone with tiny lady hands such as myself. At 100g, it's still got a reasonable sense of heft to it (or 130g if you add its 1.8m braided USB cable into the mix), so there's no danger of it going skidding across your desk if you happen to get a bit excitable during a game of Overwatch or Plunkbat or something, but I'd nevertheless be rather wary of recommending it to the larger-handed PC person simply because it's just so damn diddly. Even the scroll wheel is a bit teeny for my liking, so I can only imagine how its short, stumpy dimensions would feel under beefier digits.

Still, its build quality is sound, and the overlapping right and left click button issue that plagued the first iteration of the mouse has been rectified completely. Its pair of tactile Omron switches are also guaranteed for a lifetime of 50 million clicks, and its Pixart 3389 sensor's tracking speed of 450 inches per second (IPS) felt wonderfully responsive during games and everyday use alike.

Despite its smooth contours, symmetrical design and left-handed customisation options in HyperX's new NGenuity software, however, the fact you only get two side buttons on the inside of the Pulsefire Surge shows this is a mouse that's still very much geared toward those of a right-handed inclination. Sorry lefties. 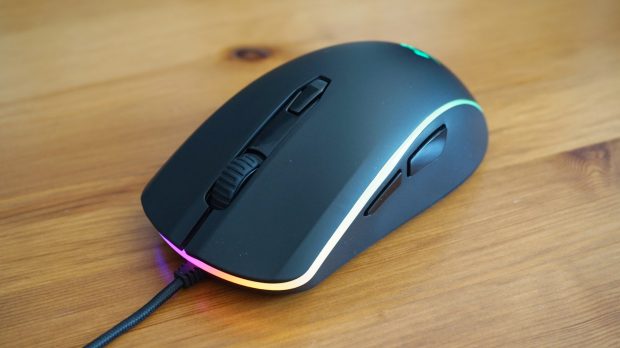 You could probably still get away with tapping one of those side buttons with your little finger judging by my own brief attempts at swapping hands, but regular use of the other side button would require a level of muscular dexterity I simply don't possess. If you're after a proper left-handed or ambidextrous mouse, then you'll probably have better luck with the Steelseries Sensei 310 or Asus ROG Pugio.

Righties, on the other hand (sorry), read on. As mentioned above, the Pulsefire Surge comes with two extra buttons for a total of six in all. By default, these easily-reachable side buttons are set to forward and back for web surfing, but download HyperX's NGenuity software and you can change those functions (as well as all the other buttons) to almost anything you like.

Admittedly, you'd be forgiven for thinking NGenuity was only good for altering the mouse's RGB profile at first glance, as the only thing you see when you first fire it up is a selection of wave, cycle and solid lighting options. It's not exactly the most intuitive piece of software I've ever used, but hopefully any layout and presentation problems will be ironed out over time. 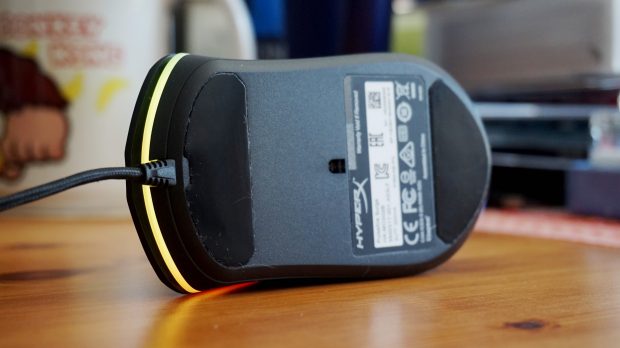 Indeed, once you've selected the profile you want to alter and hit Customise, all the usual menu options you'd expect to see pop into view, including more detailed RGB controls, DPI or sensitivity settings, and macros and key assignment. The latter includes keyboard functions, media keys, recorded macros, opening files, folders and programs as well as performing certain Windows functions such as switching apps, copying and pasting to name just a few.

However, I'd imagine most people will probably gravitate toward the extra DPI settings, especially if you're the competitive type or into your FPSs. While not quite as wide-ranging as Razer's bevy of DPI gubbins on the Naga Trinity, the Pulsefire Surge's single-speed, on-the-fly DPI button does everything I need it to do.

You can set it to any increment of 50 within its range of 100-16000 DPI, and it zips back to whatever setting you were using before whenever you take the pressure off, allowing you to get back to frantically searching for the next bit of cover after trailing someone dead-slow down your gun sights.

This is especially useful when the actual central DPI button is so tricky to find - both generally due to its very low profile, and practically when you're in the middle of playing a game and feel like you've got to stretch your middle finger a million miles away from the scroll wheel just to tap it. You get three speeds by default - a very sensible 800, 1600 and 3200 DPI that will probably suit most people straight out of the box - but again these can be changed to anything you like using NGenuity. You can even add another two speed levels if you wish, giving you five DPI profiles in total. 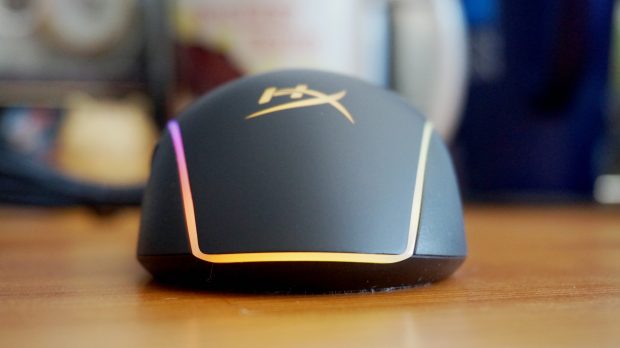 In this sense, the HyperX Pulsefire Surge offers plenty of flexibility for the money - just £60 in the UK and $70 in the US - and does a lot of the fancier DPI stuff you'd find on more expensive mice such as the £72 / $80 Asus ROG Gladius II. It is, however, a slight pain in the arse when it comes to adjusting said features, and there's no telling right now how quickly, if at all, HyperX will make their NGenuity software easier to use.

Personally, I'd probably rather spend the extra on the slightly larger Gladius II so I didn't have to deal with it. Plus, the Gladius comes with two spare switches, an extra USB cable and another button, which really isn't that bad for another £12 / $10.

The HyperX Pulsefire Surge is worth considering if you're after a small and not hideously expensive RGB mouse and aren't that fussed about customising it to within an inch of its life, but those who want an easier mouse to deal with will probably be better off looking elsewhere - specifically, the Asus ROG Gladius II or the even cheaper £50 / $60 Fnatic Flick 2.