I'll admit to doing a bit of a double-take when I saw how much the Razer Naga Trinity goes for these days. £100 / $90? On your bike, lad. But then I realised the Naga Trinity isn't really just a single mouse. With its trio of interchangeable side plates, this is three mice in one, giving you the option of two, seven or twelve extra buttons to use how you see fit, from classic desktop tasks to having every last MOBA and MMO command right there at your fingertips. It's also, I might add, pretty damn comfy. Let's see how it stacks up against our best gaming mouse competitors.

In its 12-button MOBA mode, the Naga Trinity could almost be the mirror image of Corsair's Scimitar Pro - albeit without the sharp edges, bright yellow flashes and hollowed out front and sides. Its wide, chunky shape fills a similar proportion of your palm to the Scimitar, and its rubbery sides provide the same kind of cosy nook for your thumb and little finger when they're not using any of the additional buttons.

Crucially, the Naga Trinity is a lot lighter than Corsair's effort, coming in at just 120g as opposed to 147g. The latter was too heavy for my liking when I tested the Scimitar Pro earlier in the year, and while the Naga Trinity is still a fraction on the heavy side for me, it's a heck of a lot more pleasant to use every day and doesn't make me feel like I'm having to make a conscious effort to move it round my mouse mat.

Like the Steelseries Sensei 310, however, I found the most comfortable grip position on the Naga Trinity was the further-back fingertip stance rather than my classic palm grip. This wasn't so much a result of the way Razer's shaped and sculpted the mouse - on the contrary, its right-handed lumps and bumps still fitted perfectly snugly under my hand when I did try a palm grip - but more a consequence of the wonderfully clicky and tactile scroll wheel being further back than normal. In palm mode, my middle finger ended up sailing over the scroll wheel and landing in the small recess in front of it, forcing me to shift my hand back slightly to get it into the right position. 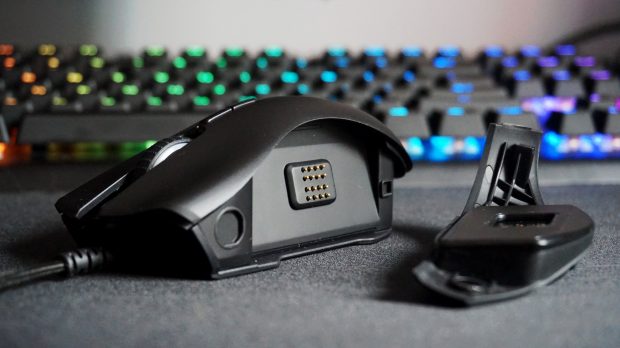 It didn't take long to get used to, though, and actually made using the Naga Trinity's various side buttons much easier. Held on by strong magnets, each plate can be easily popped on and off for quick transitions and they're all fully customisable once you've downloaded Razer's Synapse software.

There's a classic two-button option for everyday use, a MOBA-friendly seven-button side wheel with a small rubbery centre, and a calculator-style 12-button job for your MMOs, giving you a total of up to 19 buttons in all. Personally, I can barely remember what I had for dinner last night, let alone a dozen different configurations on the side of a mouse, so I tended to use either the two-button option or the seven-button wheel most often.

With the former, shifting my thumb up to reach its two large, easily clickable buttons was no effort at all. Even better, I could tap them with the lower part of my thumb and still feel confident I'd done it correctly, unlike other mice where you really need to press it down with the tip of your thumb to get a proper response.

The farthest buttons on the seven-sided wheel were a little bit more of a stretch, especially when it's so tempting to leave your thumb resting on its inner rubbery grip, but I'm sure that's probably a result of my tiddly girl hands than anything else. Like the two-button panel, they all produced a tactile, audible click regardless of which bit of my thumb I used to press them down, and they're spaced just right to avoid any unnecessary collisions or multiple misclicks.

As for the MMO calculator, this was also highly accommodating for my lazy thumb movements, and the way they've all been angled and shaped made them relatively easy to find without staring intently at the side of the mouse for five minutes. I must admit, I felt the loss of Corsair's movable number pad here, as the farthest 1-3 buttons were just out of reach for me.

It wasn't too much of an strain to adopt a more claw-like grip in this case, shunting my thumb upwards while bending my fingers a bit more to retain control over the scroll wheel, but that in turn made it more difficult for my stiff thumb joints to reach buttons 10-12. Those with more nimble digits will probably have less of an issue here, I suspect, but hey, nine reachable buttons is still more than enough for my feeble brain to cope with, so I'm not complaining. 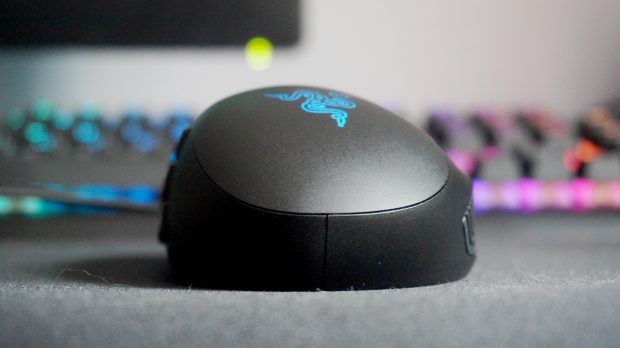 And golly is there a lot of choice on offer. Not only can you create dozens of different profiles in Razer's Synapse software - I stopped trying to add more once I'd got to 30 (although it should be noted the mouse can only store five of them at once for use elsewhere where Synapse isn't installed) - but each button also has a myriad of different customisation options.

You've got your standard mouse, media and keyboard functions as well as recordable macro settings, but you can also use them to switch to specific profiles, personalised lighting configurations, launch programs, activate Windows shortcuts and even chunks of prewritten text, complete with special symbols and accented letters from your PC's character map.

Where the Naga Trinity really shines, however, is its bevy of sensitivity options. You get five DPI speeds mapped to its pair of dedicated DPI buttons below the scroll wheel by default, ranging from 800 right up to its maximum of 16000 (although these can also be changed to whatever you like in Synapse's Performance tab), but if it's too much of a faff to reach them when you're playing a game, you can simply re-assign those functions to your side buttons instead. 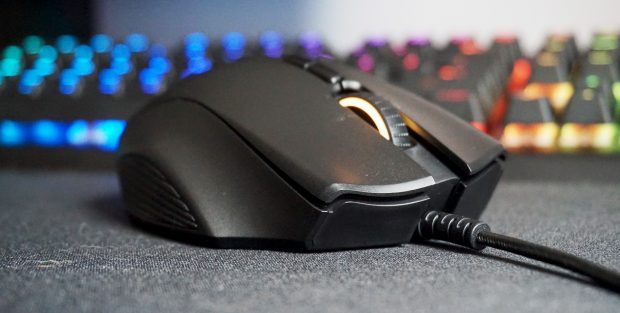 There's also a separate option to change the DPI on-the-fly together with the scroll wheel, but my favourite is the so-called Sensitivity Clutch. This drops your DPI to a separate predefined level when you hold that button down, and returns it to normal when you let go - perfect for when you're trailing your gun sights on someone in your favourite FPS, for instance, and need maximum precision for a headshot. It's rather like Asus' dedicated DPI Shift button on the ROG Gladius II, only here you've got the option to have it on any button you like, and on any side plate you like, giving you oodles more flexibility to tweak everything just to your liking.

In this sense, I think Razer's Naga Trinity certainly does a lot to justify its price of £100 / $90, and is arguably better value for money than Corsair's £68 / $72 Scimitar Pro. Yes, the Corsair lets you adjust the position of its number pad, but the Naga Trinity is both lighter and better-looking, and can ultimately turn its hand to a much wider variety of tasks thanks to its additional side plates. It's a hefty premium, I'll admit, but I'd much rather have the Naga on my desk than the Scimitar.

I'd also argue the Naga Trinity goes further than a lot of other, more traditional high-end mice as well, such as the Steelseries Rival 600 and Gladius II. The Rival 600 may still appeal to those who prefer a slightly lighter mouse and value the ability to change its weight on the fly with its bundled weights, but the Naga looks a heck of a lot smarter and less obviously gamery than either of these mice, and does the exact same thing that I like most about the Gladius II, namely those tasty DPI controls.

Of course, not everyone wants to shell out this kind of money on a mouse, nor do they need one with so many buttons - in which case I'd direct you to the infinitely cheaper Steelseries Rival 110 (£34 / $30) or Fnatic Flick 2 (£50 / $50). However, if you're into your MOBAs and MMOs and want a mouse that can cover every occasion, then the Naga Trinity won't disappoint.