One weirdly persistent Destiny 2 fan theory is that Bungie are planning to fully obliterate and remove one of the MMOFPS's areas, the Saturnian moon of Titan. It'll be a dramatic show of force from the Darkness sweeping through the solar system, so the story goes. There is no real evidence to support this but I've seen some folks start repeating it as a given. Internet, eh? At this point, I don't believe it. And yet... just in case, I have been spending a little more time on Titan. It is one of my favourite destinations, an alien waterworld where humanity once lived in great arcologies. Let me show you some favourite spots!

For all its spaceships and rayguns, Destiny is post-apocalyptic, with humanity still barely holding on centuries after a cataclysmic chain of kickings from assorted aliens. Of anywhere in Destiny 2, Titan best shows what humanity had achieved in our 'Golden Age'. Upon visiting Saturn's moon of Titan, we found methane oceans crackling with energy and thought "Yeah, let's live here." We lived in luxury, even, in arcologies with the lush gardens and sci-fi curves of Mass Effect's Citadel. We get to tour one of these in Destiny 2 and it is: very good. 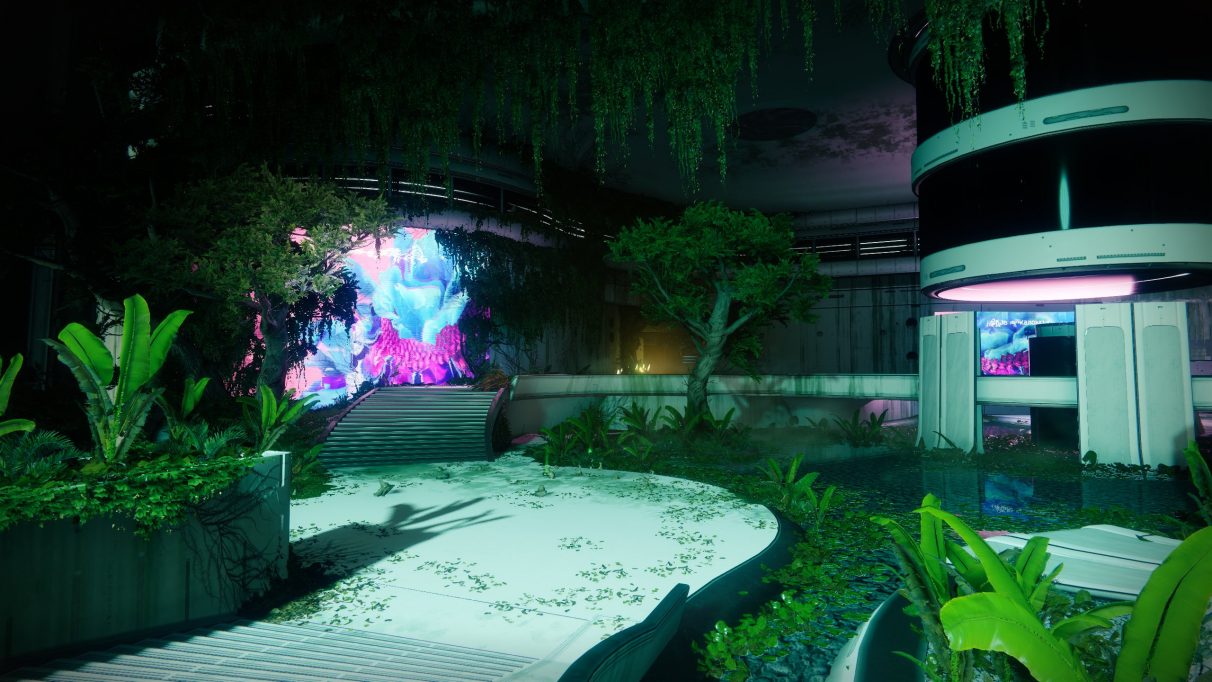 While Earth's survivors now huddle behind mile-high walls in The Last City, once we were properly a spacefaring civilisation spread across the solar system. The contrast the arcology provides gives such a strong sense of everything we lost. The arcologies might be ruined and overrun but they're a tonal note the game doesn't have anywhere else. The Dreaming City is the Awoken equivalent, I suppose, but it's all space elves and magic dragons. Titan is old-fashioned Earth sci-fi where we fill a metal bubble with tower blocks and gardens. 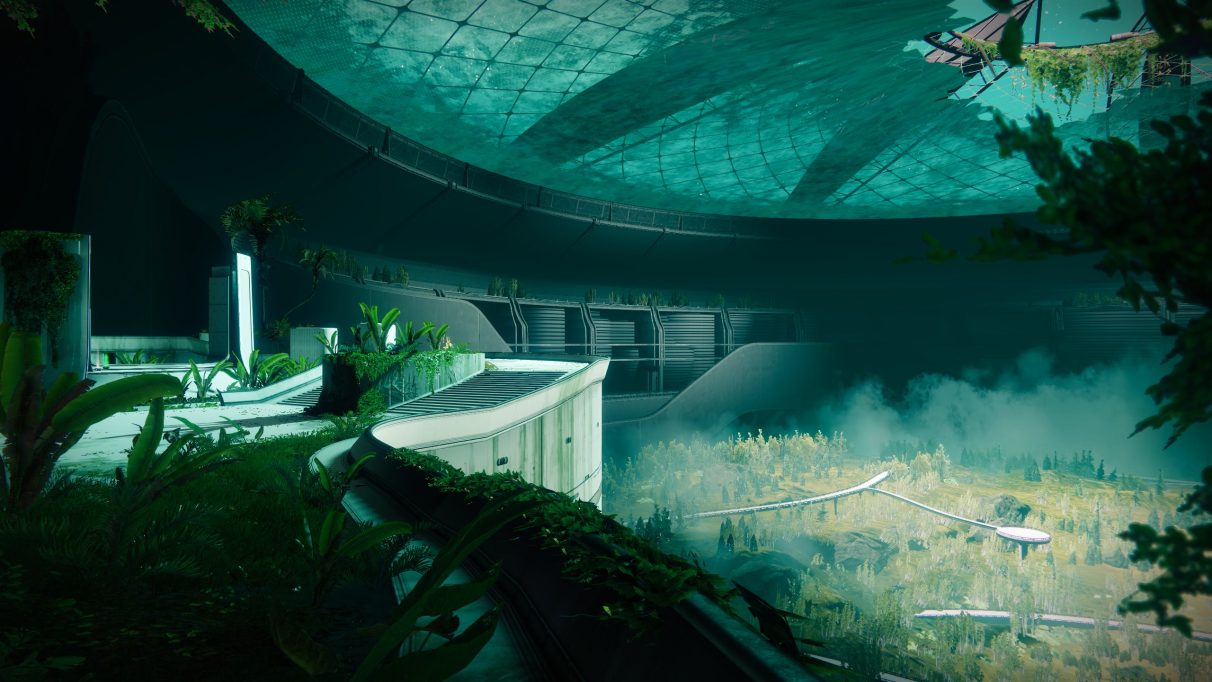 I adore how even mundance corridors are jazzed up with planted skylights, fountains, ponds, and encased trees. 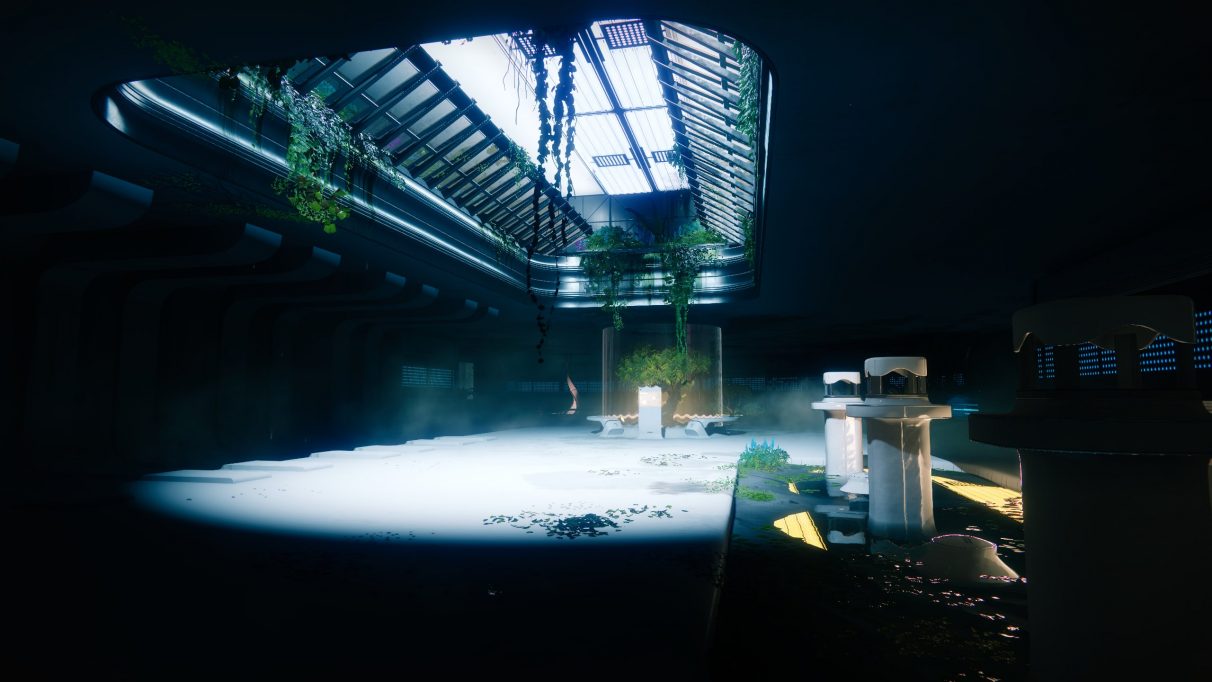 Behind the scenes of the arcology, you also find the game's most unashamedly Aliens parts.

And if you go deep, deep down to the computer core, you'll catch a glimpse of some real big sealife out in the methane:

The arcology is woefully underused, mind. Titan is a stop in the Red War campaign and returned to in a Strike and several quests, but the arcology is largely wasted. While you can wander in any time and fight the Hive, it's not an official 'patrol zone', it doesn't have fast travel points, no activities happen there, you can't bump into other players, and whole areas are locked off. A shame!

That said, I do like the non-arcology places. We start out on the infrastructure surrounding it, out on the docks, ports, rigs, and tidal generators above the crackling ocean, surrounded by sinking arcologies. It's pleasingly chunky. 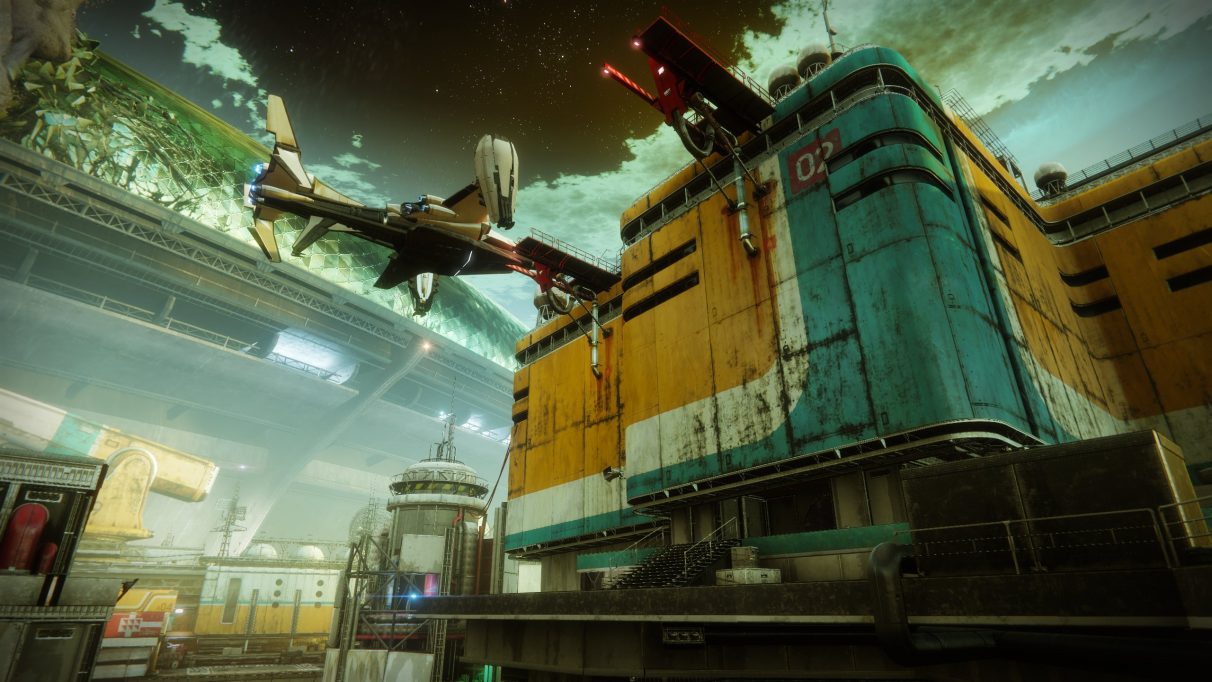 And I really dig the colours. 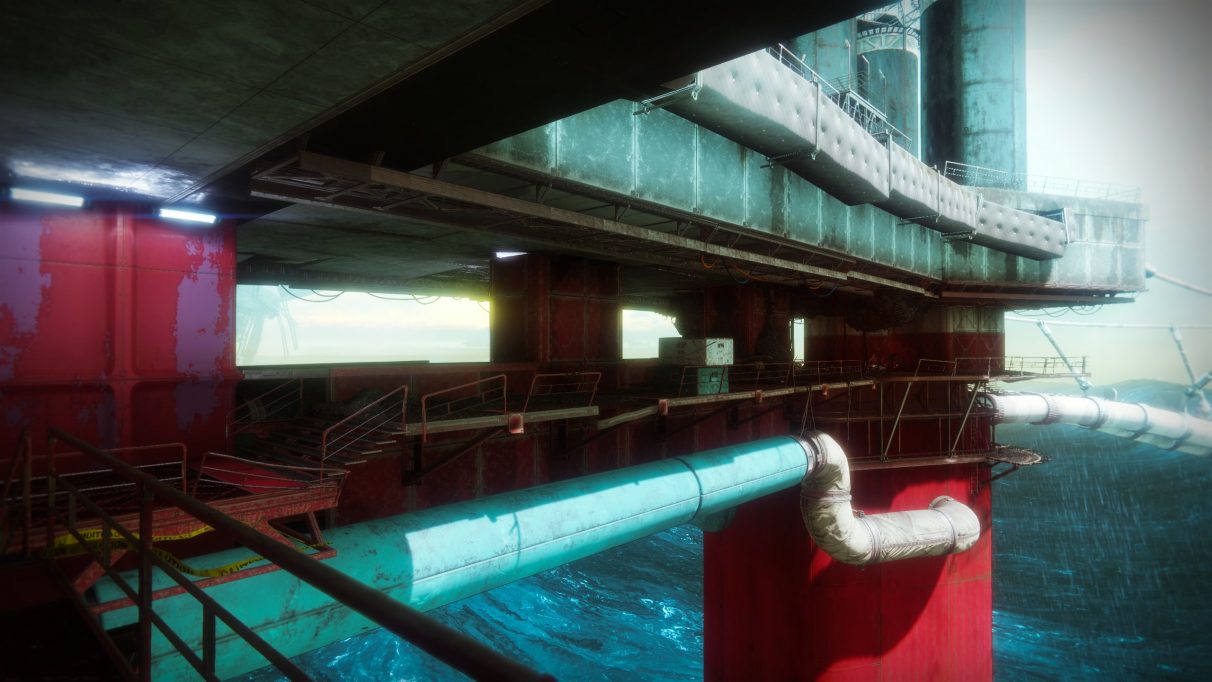 I do enjoy watching pontoons and cargo ships tossed on the giant waves. And sometimes you see the spined coils of a beastie rolling though.

Ah, how nice to sit out in the rain and hail, watching Saturn at night - ringhole and all.

So why do people think Titan is getting destroyed? It seems to be started by dubious leaks from 4Chan saying the next major expansion will bring another disaster, then Titan got the finger from fan theories and the fact Titan's emblem was temporarily marked as only available for a limited time. Rumours also got tangled with Bungie saying last year that seasonal activities needed to be temporary because they couldn't keep adding and maintaining new stuff forever; it's a big stretch from that to thinking they'll delete a core location. None is remotely solid, but it got people talking. Over the past month, I've seen people writing fanfic about its demise, pointing out it'd be weird if true, asking to fight the sea monster before it goes, pleading for Bungie to to destroy other, worse places instead, and so much more. The supposed leaks have no supporting evidence, some are so plainly fake, Bungie surely wouldn't delete a place used in the Red War campaign and other quests, and yet... here I am, giving tours of Titan, just in case.

It is clear that the forces of Darkness are closing in, and we could be headed into perilous times. But Bungie could also drag this out for another age. While I do want the plot to advance beyond hints and background tales, I'd also really like Titan to stick around, thanks.