I'm going to get this out of the way, because every outlet with a hands on preview of Ubisoft's action-adventure Immortals Fenyx Rising (which used to be called Gods & Monsters) is going to say it somewhere. Immortals Fenyx Rising is a proper Breath-Of-The-Wildalike. It's one themed around Ancient Greek myths, yes, but you've got yer horses you can tame, yer open world to explore in any order you like, yer physics puzzle dungeons and levitating rocks ability. You've even got yer stamina timer and ability to clab onto and climb up any vertical surface, like a particularly disquieting flesh spider.

Its similarities with Zelda is the first thing I ask associate game director Julien Galloudec about. He says it is always nice to be compared to very good games, but points to other titles as key influences on Immortals Fenyx Rising. "Games from the early 2000s - those action-adventure games like Jak And Daxter, Banjo Kazooie that were very action-adventurey in a more open world, with a lot of different challenges like puzzles and fights combined together," he told me. "We wanted to do something with that, combined with the background of the Greek mythology." 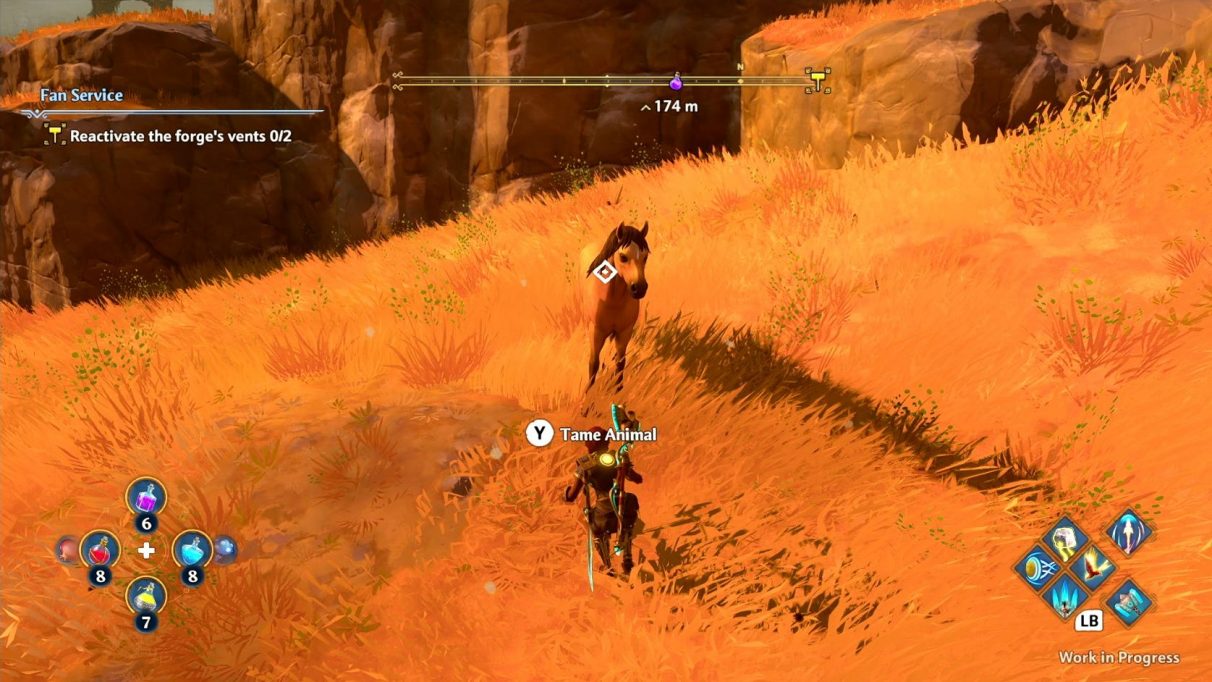 Ubisoft have been hanging around Ancient Greece a lot recently (including Galloudec specifically, who worked on big buff merc adventure Assassin's Creed Odyssey). According to him, the team just loved Greek mythology so much that they wanted to keep making stuff with it. "We wanted to take all of that as the raw material and create something very different and fresh compared to what we did before," he said.

So instead of sailing around the islands of real-life Greece and sometimes running into a monster or god who turns out to be an alien or something, this new Ubi-take on Greek myth is set totally in the myth world, albeit telling a new story. You play as Fenyx, a customiseable hero fighting on behalf of the gods, who have been defeated and banished by Typhon the Titan. You, equipped with fun god powers like wings to glide off high things and special attacks of the big-magic-hammer-smash variety, explore different areas of the island, each of which used to be the domain of a god.

By freeing the area you can free the god from Typhon's grim curse. In my two hour hands on, I was in The Forgelands, where Hephaestus the divine blacksmith used to hang out. The vibe was dusty and rusty, with Iron Giant-esque automatons frozen mid-toil and a variety of cliffs and ruined temples to launch myself off, floating for ages. I was free to tackle whatever I wanted, in any order, so after relighting Hephaestus's fire (his quietened forge) I spent a while pottering about doing different challenges and puzzles.

You're accompanied on this quest by two narrators, Zeus (Zeus) and Prometheus (a Titan most famous for stealing fire from the gods and subsequently having his liver eaten by an eagle every day). Their banter, in this case made specifically for the build, was lighthearted, humourous and even fourth-wall breaking. They joked about the correct way to pronounce 'Ubisoft', and they popped in to comment on almost every maxi- or mini-quest I did and thing I saw. Galloudec said that, though it won't be as constant in the final game as it was in the demo build, the tone was pretty representational. It acts, he said, as a contrast to the often dark nature of Greek myths. See: liver eaten by an eagle. It's also another way to freshen up Immortals' take on the old classics.

The three key pillars for Immortals are, according to Ubisoft, the exploration and fun traversal, the combat, and the puzzles. For the former I was combining my flapping about (which I wasn't very good at), galloping around on my horse, and climbing around ruins. Sometimes you have to do stuff like deploy your wings over an air vent to navigate some ruins more efficiently. Fun! Your wings are also governed by your stamina, which also comes to play in the combat. 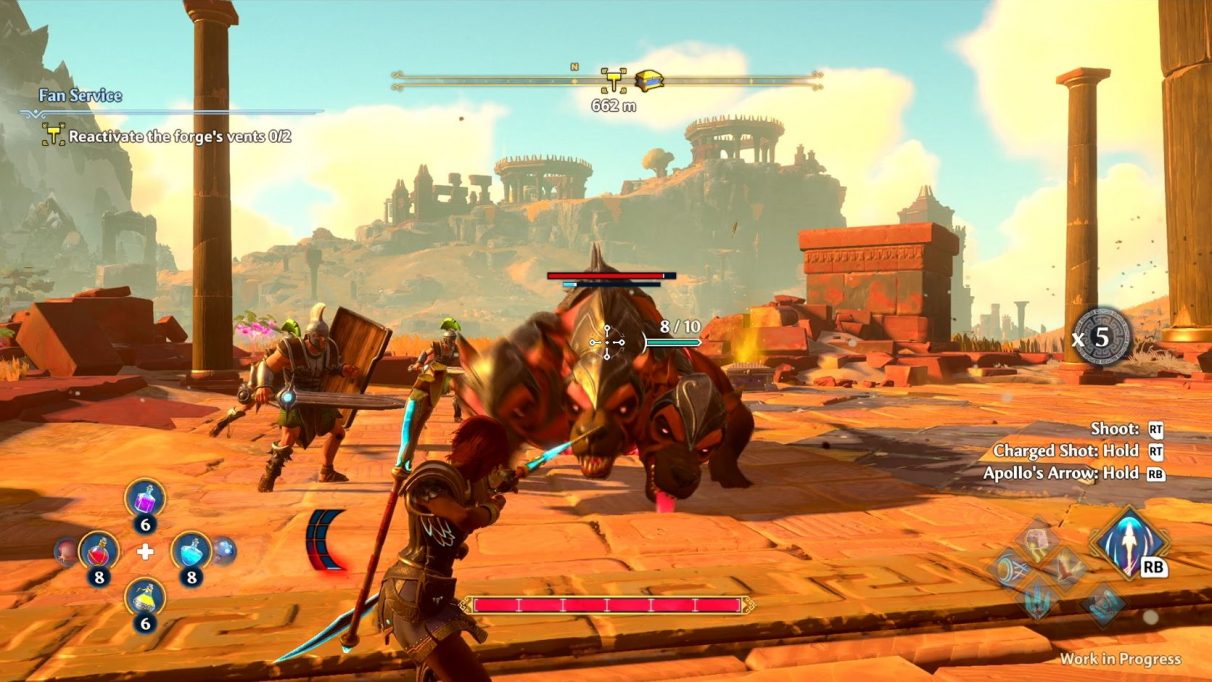 The first few fights I had, I was like "Ah, yeah, this is pretty easy, isn't it? Just smash these lads with my axe, no bother." And it is a bit that. You also have a sword for quicker slashing and a bow and arrow. At a base level, it's pretty standard stuff, and you can pick up new weapons and gear from completing missions, and upgrade them with currency and special crafting ingredients you can find - kind of a simplified version of Odyssey's gear levelling. (And, side note, Fenyx has a bird mate flying around with them as well, and can do far sight to highlight items of interest on the map.)

But the further afield I went, the more the game mixed up groups of enemies to have, say, a few soldiers worrying me whilst a big three headed dog did explosive AOE attacks, backed up by flying harpies shooting projectiles. Enemies also have stamina bars to wear down, and unblock-able special attacks of their own.

It can be a real challenge, and I did find myself going through reams of potions (one flavour each for health, defense, attack and stamina). I can see the potential, though, for enemies in the full game to be reskins that become repetitive, so I'm hoping there are more unique bosses and area enemies - like the aforementioned robots in The Forgelands, some of whom are still stomping about looking for a punchup - scattered throughout. 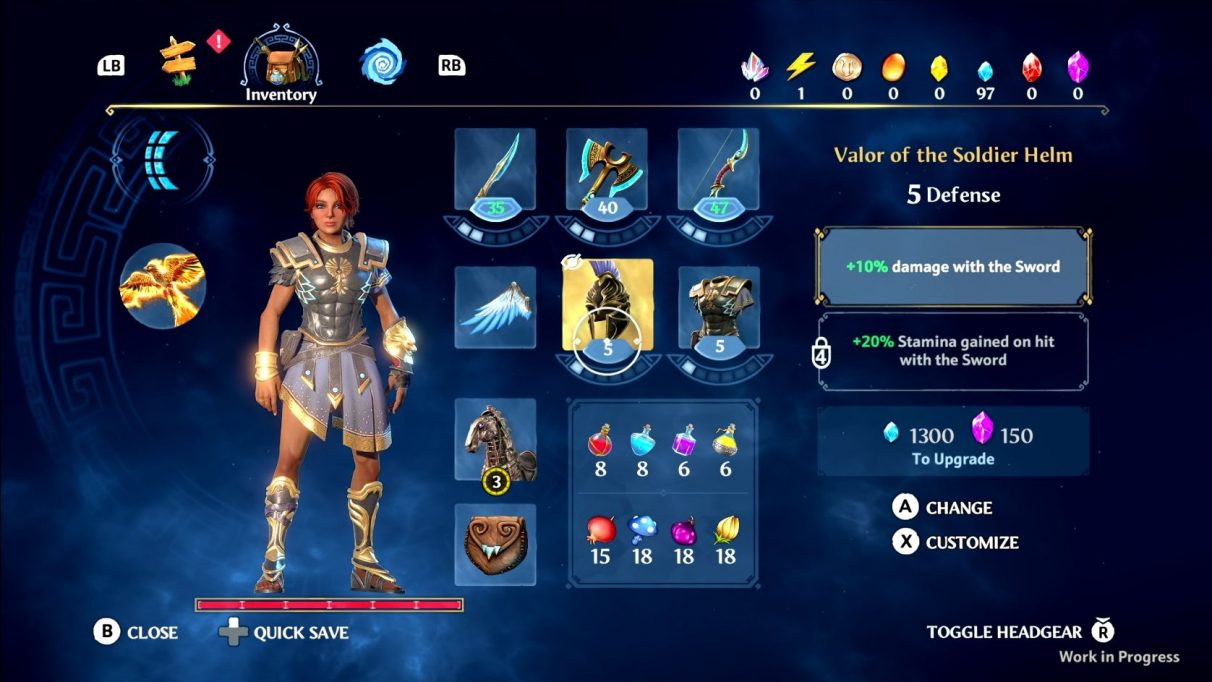 Probably the biggest surprise was in the puzzling. Immortals has Zelda dungeons in the form of the Vaults of Tartarus, which are extra special puzzle vaults in the underworld. "Each of them have a unique theme and a unique vibe," said Galloudec, "and as you progress in the game you keep being surprised." Look, they're not as ingenious as Ninty's ones, but the two I did, a tutorialising one and a trap-dodging platformer, were decent fun.

More fun were the ones in the world, the third key pillar for Immortals. And they were surprisingly hard. One, a Constellation puzzle, had the ultimate goal of gathering up blue spheres and placing them in the right slots on the floor. But, like the magic roundabout in Swindon, this was a puzzle made up of several attendant puzzles. One involved pushing blocks through lasers, another was a timing and flight one, another involved reading an environmental clue and smashing up stones...

The contrast in lighthearted tone and colourful, cartoony art style, and actually pretty difficult, complex puzzles (harder than any of the box-pushing puzzles in tombs that you're asked to do in Odyssey) made me wonder who the intended audience is. Kids of all ages, perhaps? Galloudec said that making the game fun and memorable was the first intention, but that Immortals has a lot of difficulty options for different audiences. 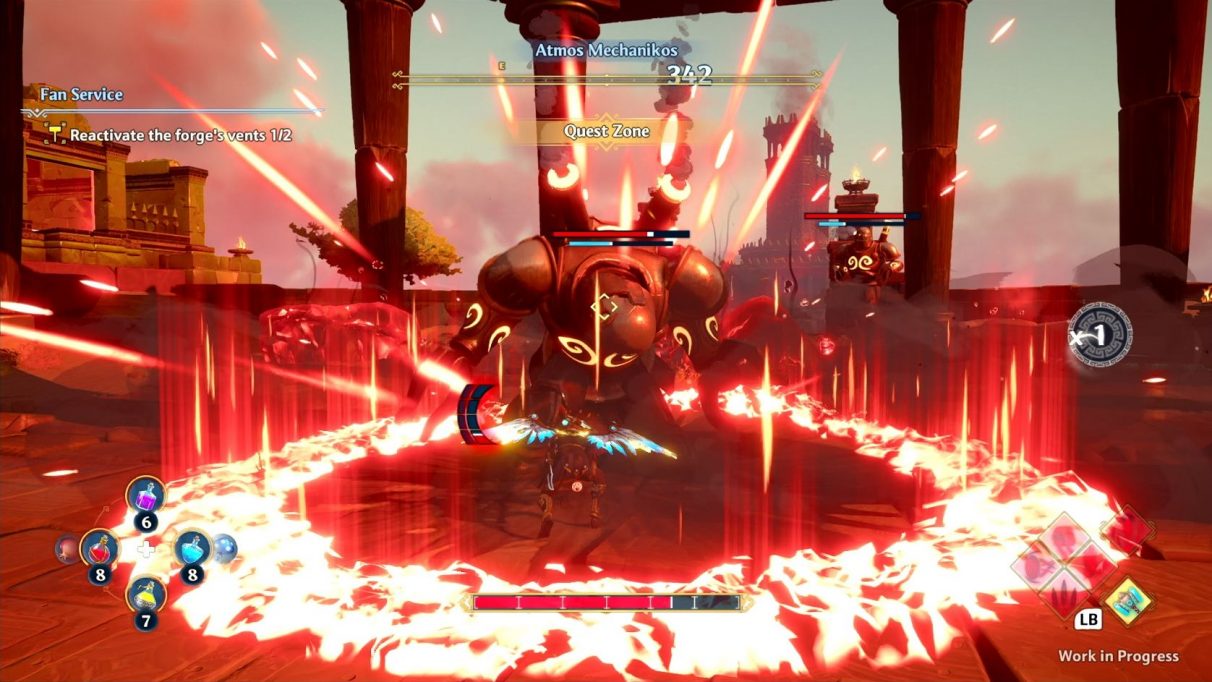 "We include a lot of accessibility features and difficulty levels that are not just about fights and the amount of damage you can take or give in combat, but also how much you can be guided and helped with the puzzles and challenges," he explained. "You have quite a lot of options and parameters you can tweak to make sure the experience fits your expectation in terms of challenge."

You can, however, brute force puzzle solutions if you, like me, miss the 'correct' solution but work out that special attacks can send a weighted block flying in a desired direction anyway. Galloudec said he welcomes this: "An important part of the puzzle design for us was to make sure there are many ways to resolve them, depending on your experience as a player, the way you think and see things, and also depending on your progression and how much you've unlocked special abilities and perks." 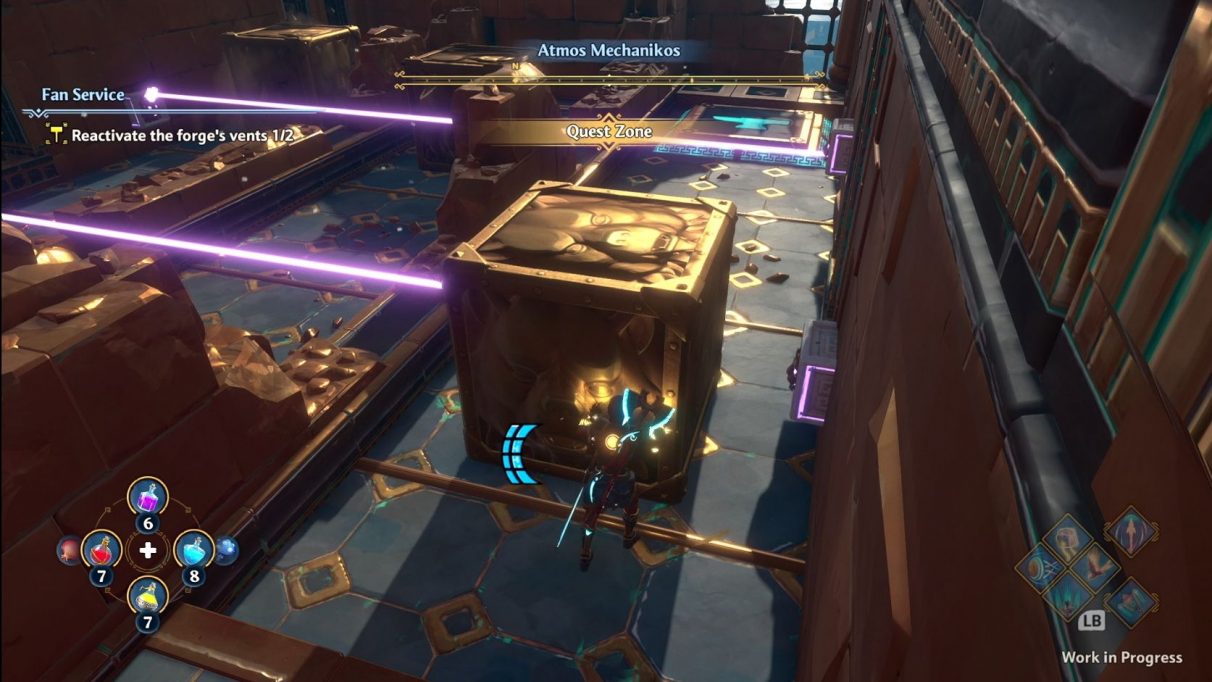 Back before the title change, of course, Immortals was supposed to come out in February this year. The extra time in the oven is actually partly for the reason for said name change, according to Galloudec. It was an opportunity to "push our vision and even challenge it." The game changed to the point that they needed a new name "to be aligned to that updated vision". It combines the timeless aspect mythology angle in 'Immortals' and the new hero on an epic journey with 'Fenyx Rising', which is fair enough, although I can't really say I'm a fan.

I did like the game, though! It seems like the sort of thing you could play with your kids as much as enjoy poking about in yourself, sort of like how Christmas pantos have jokes for the grownups. All in all, though, it really does feel a bit like AC Odyssey shagged Zelda and Ubi got custody of the baby. But I spose that isn't at all likely to get okayed as a title.