Throughout your travels across the Golden Isle of Immortals Fenyx Rising, you'll come across a great many different weapons to use in combat with the evil Typhon's minions. While each sword, axe, or bow will deal the same amount of base damage as any of its kin, every weapon has a unique skillset which makes them more powerful than meets the eye. Use this guide to learn where exactly to find the very best weapons in Immortals Fenyx Rising. And the best part is: they're all incredibly easy to find, and all very near one another!

Fenyx gains access to three primary weapons in the prologue of Immortals Fenyx Rising: a sword for light attacks, an axe for heavy attacks, and a bow for ranged attacks. Each weapon you'll find throughout the game will belong to one of these categories, but they will each also have two unique skills. One skill is active from the start whenever that weapon is equipped; and the other activates once you level up that weapon type to Level 4 by spending Adamantine at the Forge of Hephaistos in the Hall of the Gods.

Because of these skills, certain weapons are far more powerful than others, and there are some excellent synergies you can set up with the right combinations of weaponry. Below I've laid out one of my favourite combinations of the best weapons in Immortals Fenyx Rising: and the best part is that you can get all of these weapons in the same area of the Valley of Eternal Spring shortly after finishing the prologue!

Swords have fast attack combos, and replenish Stamina with every hit, but they deal less damage than Axes. For this reason, I tend to use swords as a backup option when I've run out of Stamina after my initial barrage of Godly Powers and Axe attacks.

The best sword in Immortals Fenyx Rising to prioritise early on is the Departed Shade. This blue blade gives you a significant damage boost for 6 seconds every time you Perfect Dodge; and at Level 4, it creates 2 Stamina Orbs on hit with every Sword Sprint Attack. The latter skill is nice to have, but the former damage buff makes Departed Shade about as great a sword as I've found so far in Fenyx Rising.

Happily, Departed Shade is very easy to obtain. All you need to do is defeat the enemies at the Guarded Chest south-west of the Hall of the Gods, and open the chest. Take a look at the map below to see exactly where to find the Departed Shade sword: 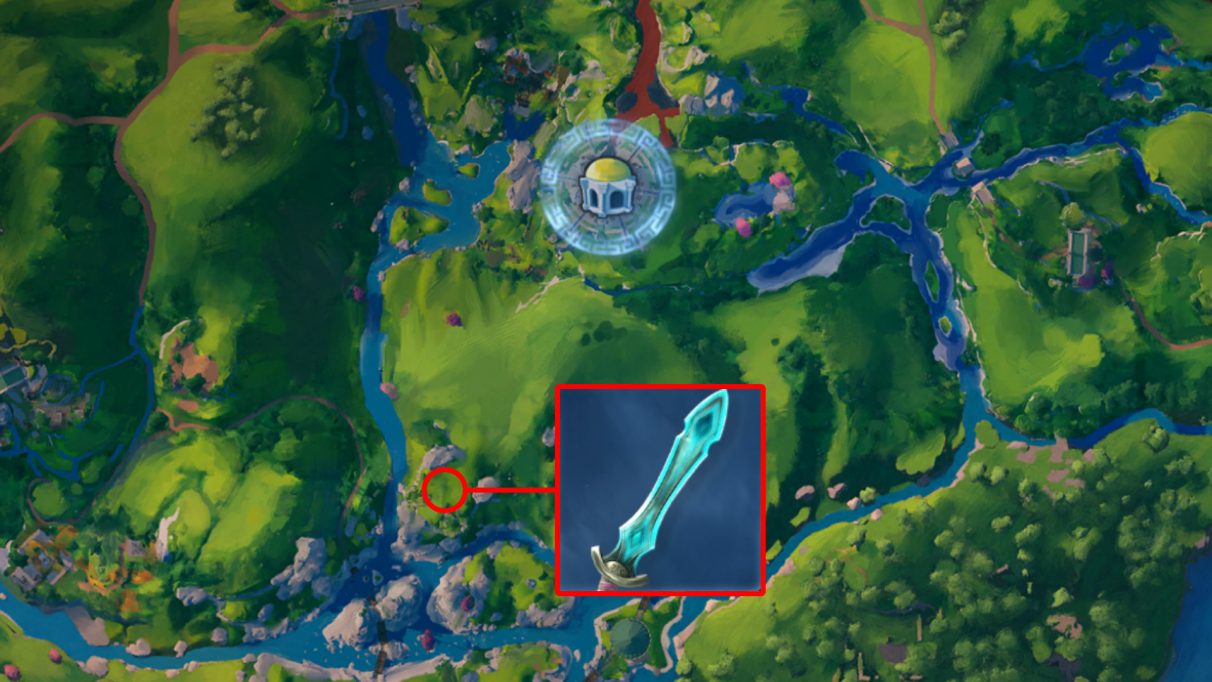 As mentioned, I tend to prioritise my Axe and Godly Powers over my Sword when fighting anyway, but the Departed Shade is a great backup option which gives me high damage while I replenish my Stamina, and you can pick it up very early on.

Axes in Immortals Fenyx Rising have slower attack combos than Swords, but they deal more damage and inflict high Stun damage - which is of great importance when fighting tougher enemies and bosses.

The best Axe in Immortals Fenyx Rising to obtain early on is the Forbidden Labrys. The perfect counterpart to the Departed Shade, this Axe gives you a big damage boost for 6 seconds every time you Perfect Parry, and at Level 4 it increases your Stun with every Axe Counter Attack. You'll know if you've read my Immortals Fenyx Rising skills & Godly Powers guide that Axe Counter Attack is one of the most powerful skills in the entire game, so this weapon perfectly complements the Parry-heavy playstyle that will lead you to victory throughout Fenyx Rising.

Amazingly, this phenomenal weapon is extremely easy to obtain, just like Departed Shade! Just head to the Guarded Chest near the east coast of the Valley of Eternal Spring, across the water from the Observatory at Clashing Rocks. It's also right next to another Epic Chest and some Ambrosia you can pick up on your way. Take a look below to see exactly where to find the Forbidden Labrys: 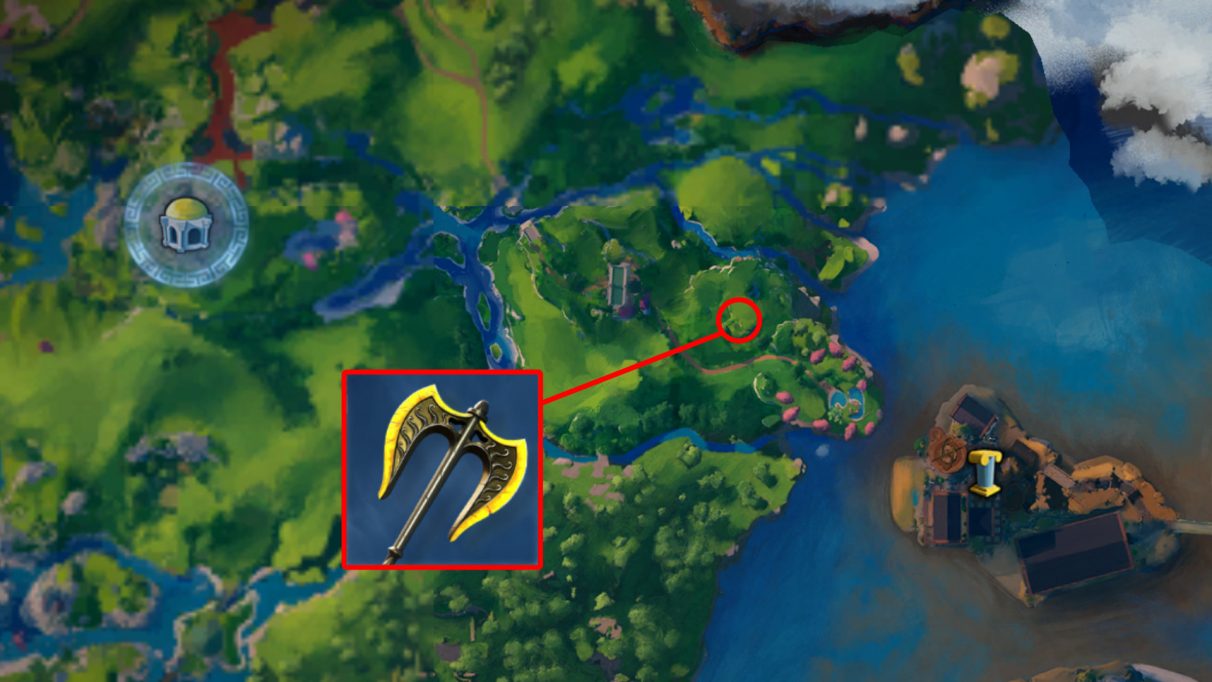 Bows are your primary source of ranged attacks in Immortals Fenyx Rising. While aiming you can tap fire for a quick shot that deals low damage, or hold fire for a charged shot that deals increased damage. You can also shoot an Apollo's Arrow which you can guide exactly where you like. This is often a requirement for puzzles, but it can also be a powerful tool in combat.

The best Bow you can find early on in Immortals Fenyx Rising is called Resistance. This purple bow upgrades your Charged Shot, making it deal 150 stun damage and knock back smaller enemies. At Level 4, Resistance also has a chance to freeze an enemy for 5 seconds on a headshot.

I tend to use my Bow sparingly anyway, but Resistance's utility as a tool for interrupting and freezing enemies - particularly flying enemies - makes it a very valuable addition to your weapons arsenal.

The best part is that Resistance is a scant 30 seconds' travel from where you can find Departed Shade! It's in another Guarded Chest, this time on the tiny island directly south of the Hall of the Gods. I've labelled it on the map below: 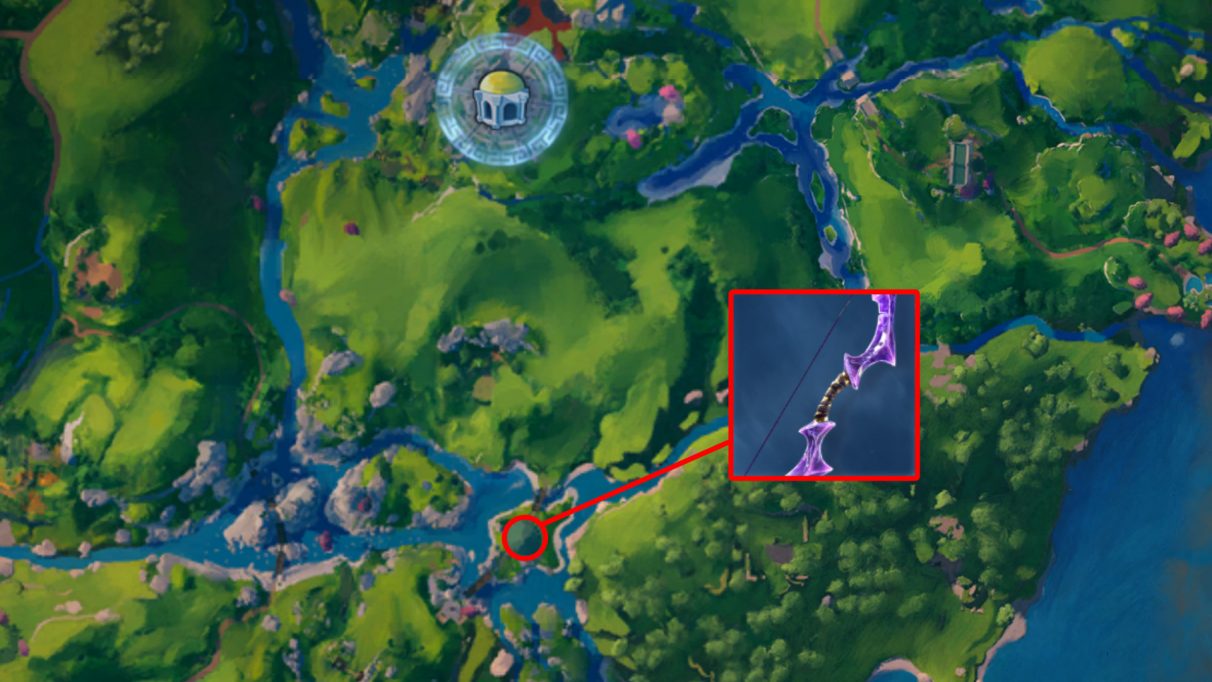 For completion's sake, I'll also add the location for the best early Phosphor aspect you can find in Immortals Fenyx Rising. If you haven't yet unlocked Phosphor, you'll need to complete the Bolt from the Blue side-quest, which is activated by climbing atop the head of the Aphrodite statue from which you can scout the Valley of Eternal Spring.

Phosphor's aspects are unlocked by defeating various Legendary beasts across the Golden Isle. The best aspect I've found so far is Phosphor the Lovebird, which is obtained by defeating the Legendary Boar right next to the first cabbage puzzle I describe in my Immortals Fenyx Rising cabbage puzzle guide. I've labelled the location below - yet again, it's not at all far from the other weapons in this guide! Just take care when dealing with that Legendary Boar, because he has some nasty attacks. 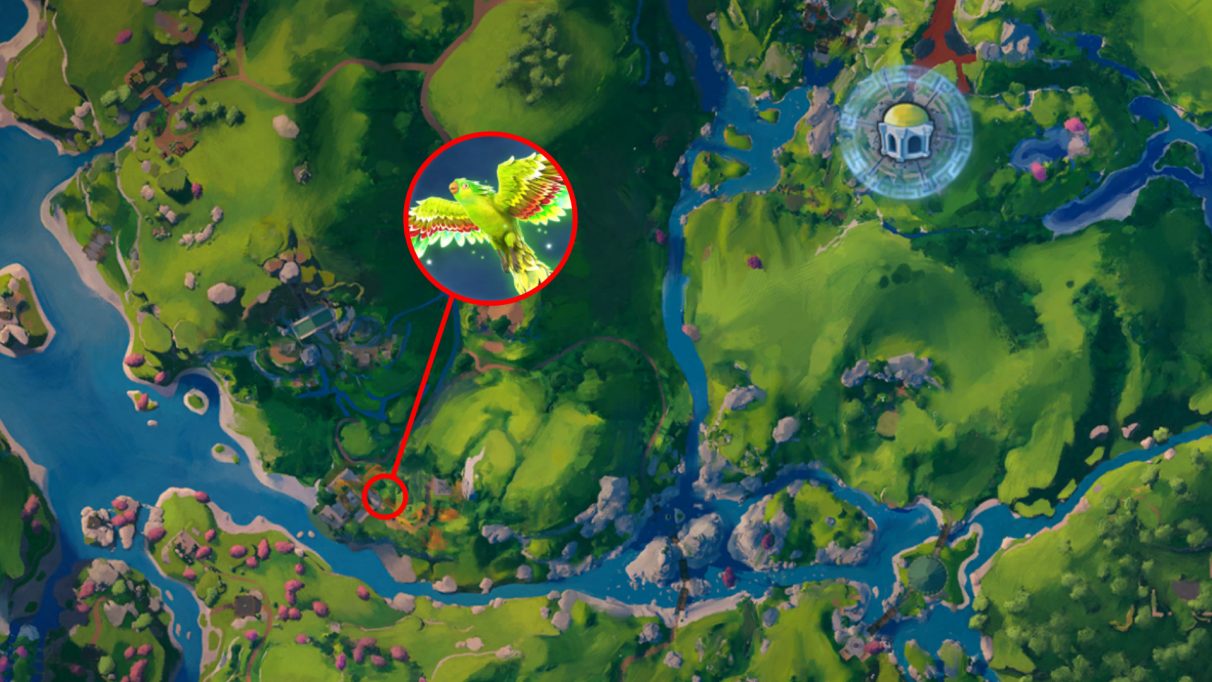