When Imperator: Rome was released in April this year, I really enjoyed it. My colleague Ghoastus absolutely loved it. To be honest, both of us were happy with it as it was. Nevertheless, in response to a good deal of player roaring on launch, Paradox have been working hell for leather to rebuild whole sections of the game, and after two big free patches, we're now looking down the barrel of a third before the end of the year - along with a content pack (also free) about the Punic Wars.

As of September's 1.2 "Cicero" patch, The Monarch Power resource, which many people referred to as "mana", is gone. Instant population upgrades are gone. Sad times as your boats have nothing to do: also gone. Despite retaining everything I liked about it in the first place, it's a wildly different experience now - and patch 1.3, "Livy" is going to shake it up even more. The headline change is the new mission system, which introduces both scripted objectives for Rome and Carthage as part of the Punic pack, and procedurally generated missions for everyone else. But there's a whole amphora full of other improvements too, including a revamped character experience system, and new tactical gameplay which - among other things - includes finding dinner for elephants. And once again, like bread hurled from a tribune's balcony, it's all for free.

I thought of starting this article by summarising everything that changed with the Cicero patch, but I genuinely don’t have time - I’d probably be pushing 2,000 words before I even got round to discussing Livy. Suffice to say, there were a lot of changes, and you can read about them here. But while Cicero was all about addressing audience complaints, knocking out Imperator’s foundations and rebuilding them with nicer mosaics and a hypocaust (in this metaphor, the game is a villa), Livy is all about what content designer Peter Nicholson calls “quality of life”.

“You start the game,” he explains, “pick a country, and… what then? People often find they lack direction, and don’t really know where to go with their nation”. For him, some kind of mission system was essential for Imperator, but neither the focus trees from Hearts of Iron 4, nor the mission sequences of Europa Universalis 4, felt like a good fit.

Imperator opens on a crucial moment in history, during which several empires had just fallen to bits, and growing powers such as Rome had everything to play for. In a setting like this, with the fate of so many nations in flux, it didn’t make sense to be too prescriptive about what players should push towards.

Of course, there’s still some room for scripted missions and storytelling. The centrepiece of the Punic Wars pack is a pair of objective trees - one each for Carthage and Rome - comprising around ten “mission blocks” each, and with each mission block containing eight to fifteen individual objectives. When you add up all the objectives, each of the trees is a good bit larger than a HOI4 mission tree. 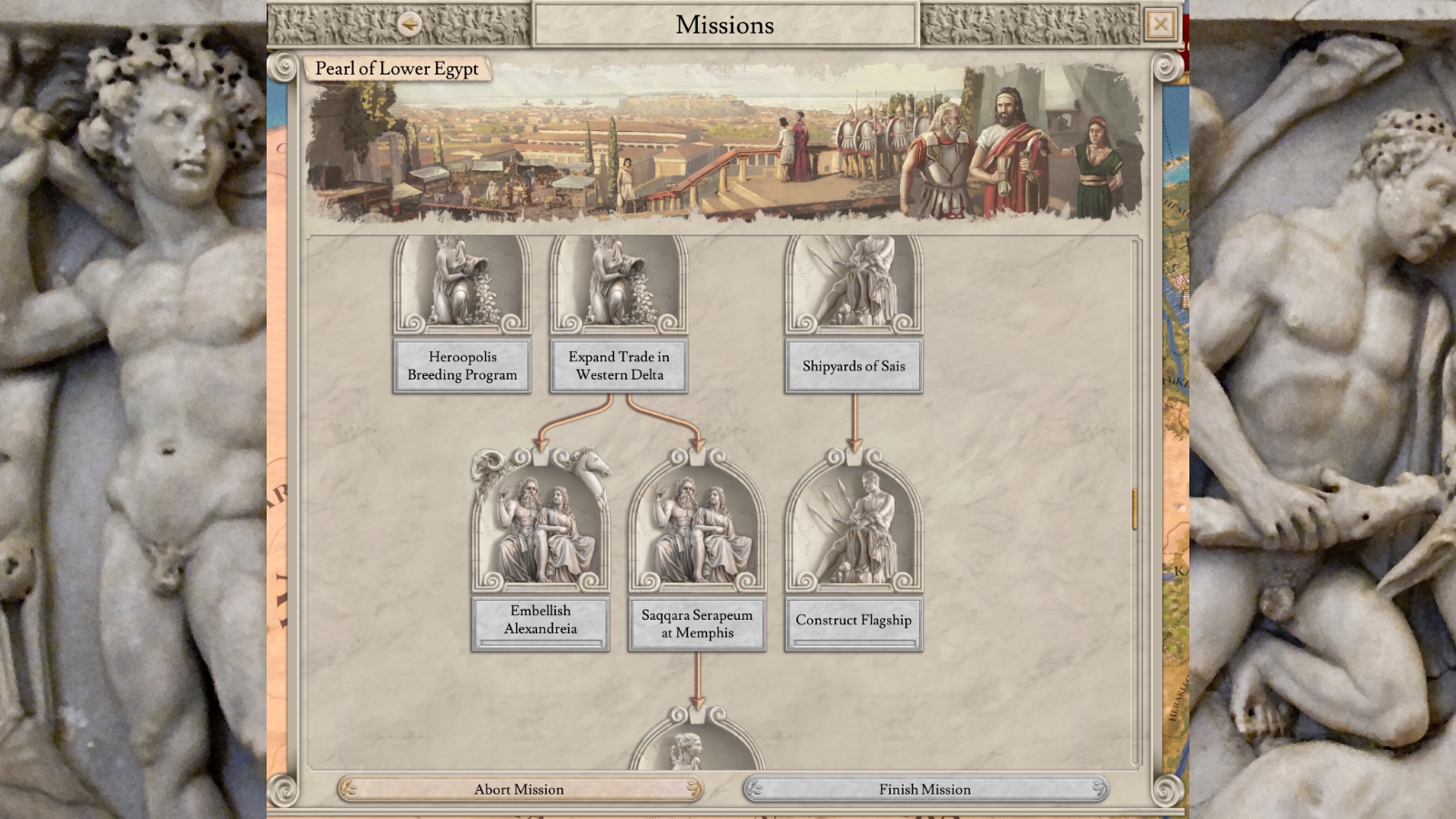 Many of the mission blocks tell stories - for example, as Carthage’s influence expands in the mediterranean, Rome is tasked with defending her historic port sites. Some too are situational - if you’re bordering Egypt, let’s say, you might get a mission block dealing with securing grain supplies from the breadbasket of the nile.

And they’re not all to-do lists full of “build x number of forts”, either: some of the mission blocks Peter told me about involved achieving objectives within a set time, or making difficult choices between alternate solutions to a problem. Crucially, too, there’s not a set order in which you need to complete them, giving you some flexibility in crafting your alternative history. Rome might choose to start the game by uniting Italia, or ignore that, turn to the south, and swallow up Magna Graecia.

“Our story missions are just that”, says Peter, “stories intended to allow a player to pick chapters appropriate to their interests, in which to immerse themselves.”

As is the way of the worlds, right after I'd finished writing this article, Paradox published a dev diary going into much greater depth about story missions. You can read it here. 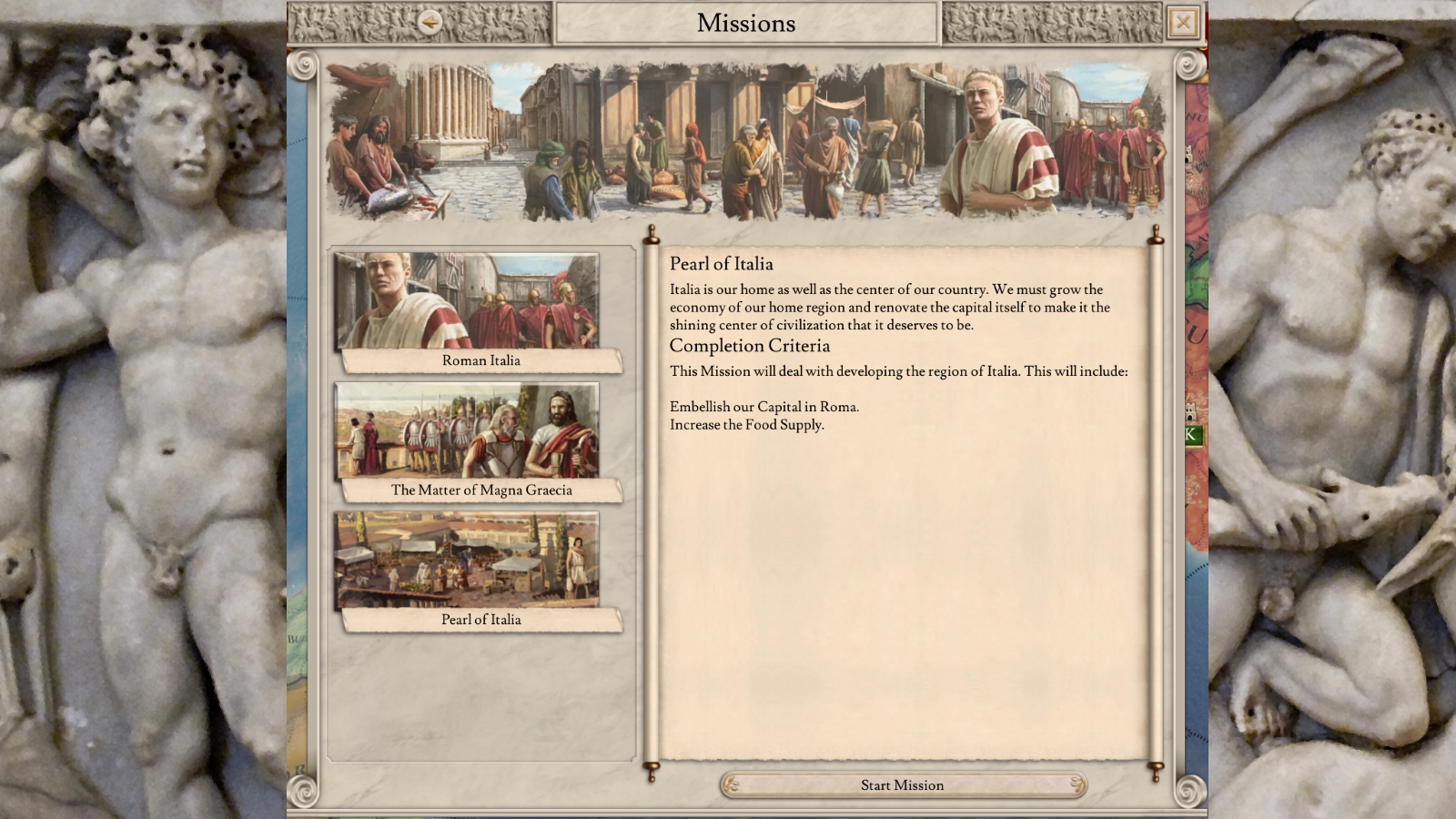 It seems Paradox’s intention is to roll out these mission trees for more and more nations over time, but with 450+ political entities in the game, there’s no way they’ll all end up with scripted trees. Luckily, to fill the gap, the Imperator team has built a procedural mission generation system, which can produce sets of goals and rewards for any nation you want to play as, based on what the game knows about who you’re playing as, what areas surround you, and what your neighbours are likely to get up to.

Of course, with the mission system still in its early days, a lot of the procedural blocks are likely to feel quite generic. Nevertheless, it will be a big improvement on the current situation, and will work towards giving the game a sense of what Peter calls “regional narrative”. Without a sense of what’s going on in a region, he argues, driven by the intersection of nations following their own mission blocks, “there’s very little to differentiate playing as a tribe in Southern Gaul, and one in Northern Gaul.” (At this point I had the overwhelming urge to demand an Asterix mission pack, but thought better of it.)

Going by this logic, of course, the addition of scripted objectives for both Carthage and Rome will make things feel a bit richer for anyone playing as one of their regional neighbours: with the two nascent superpowers triggering narrative events left, right and centre, it’ll be a rare state that doesn’t get caught up in the crossfire. 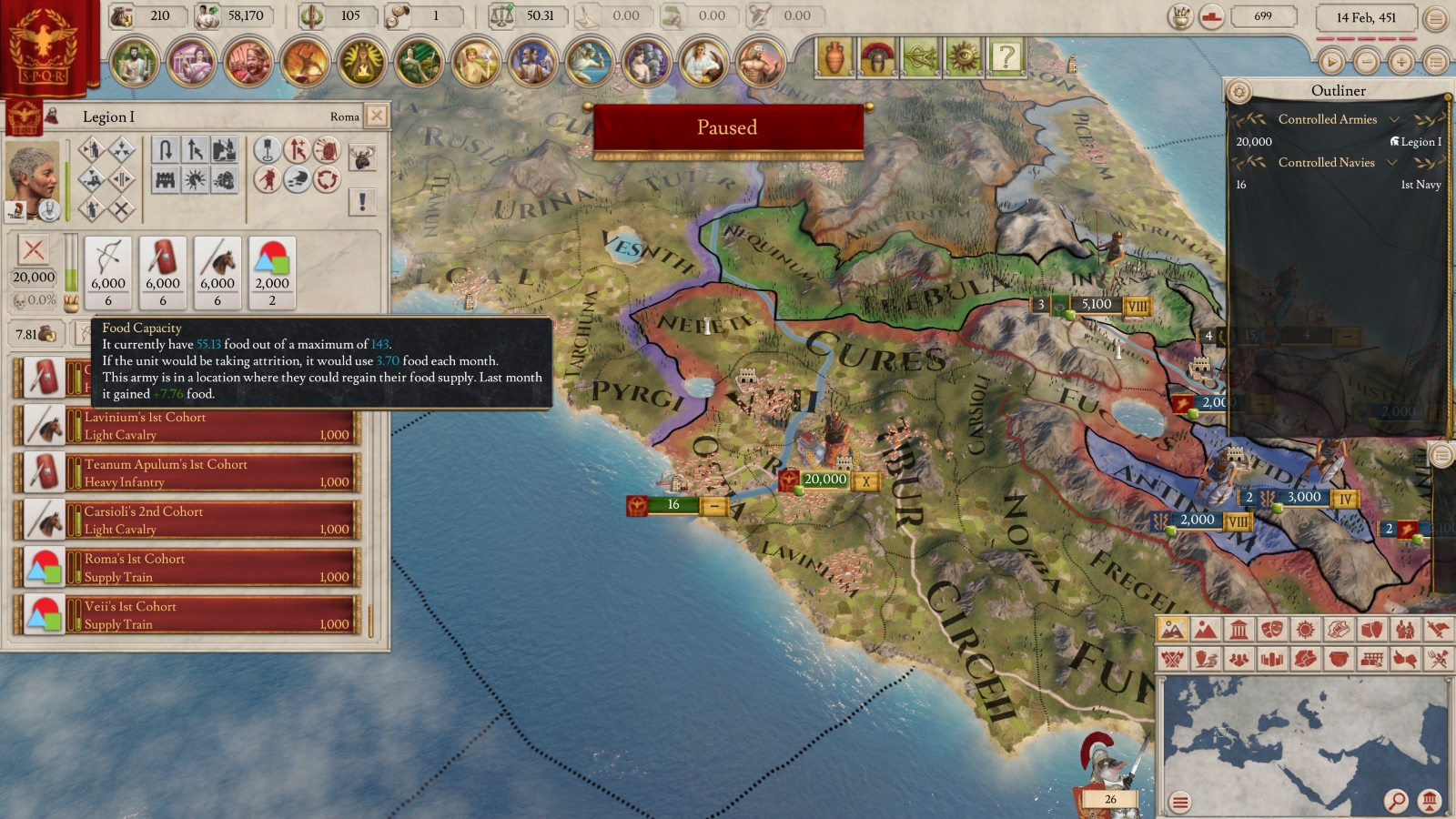 Speaking of crossfire, war is getting spruced up a bit for 1.3, which is just as well, given that the attendant content pack is about one of Rome’s biggest ever barneys. The reinforcement mechanic, largely unchanged from that of Europa Universalis 3 at present, will be rewritten to make armies consume food and carry food with them - elephants, apparently, present a logistical nightmare.

To support this system, there’s a new unit called a Supply Train, which can feed your army - but it’s reportedly “abysmal” in combat. Rather than just making soldiers vanish, attrition will now drain the food supply of an army, causing it to lose strength and preventing it from being reinforced. All of this means you’ll now be able to lose sieges if you run out of din-dins, for example, and the AI is apparently a lot better at using the new system, so expect things to get a bit tougher on campaign. Better get that grain in from Egypt after all, right?

But as well as narrative campaigns and deeper combat systems, Livy is going to continue working on the internal workings of player empires. When Cicero scrapped Monarch Power, it replaced it with “political influence”, generated by how smooth your relations were with the characters appointed to prominent posts in your nation. Now, the careers of those characters are going to get more interesting to manage. Looking to history, Paradox have implemented a rudimentary simulation of the Cursus Honorum, the Roman “ladder of offices” in which aspiring politicians would climb through a sequential order of public positions as they progressed through their careers.

A full representation of the Cursus would have involved way too much micromanagement, but it’s represented by the fact that someone can only develop so much statesmanship experience in a particular position. To get the most out of them (and build up your political influence), you’ll have to promote them to a new position, where they can continue to grow. 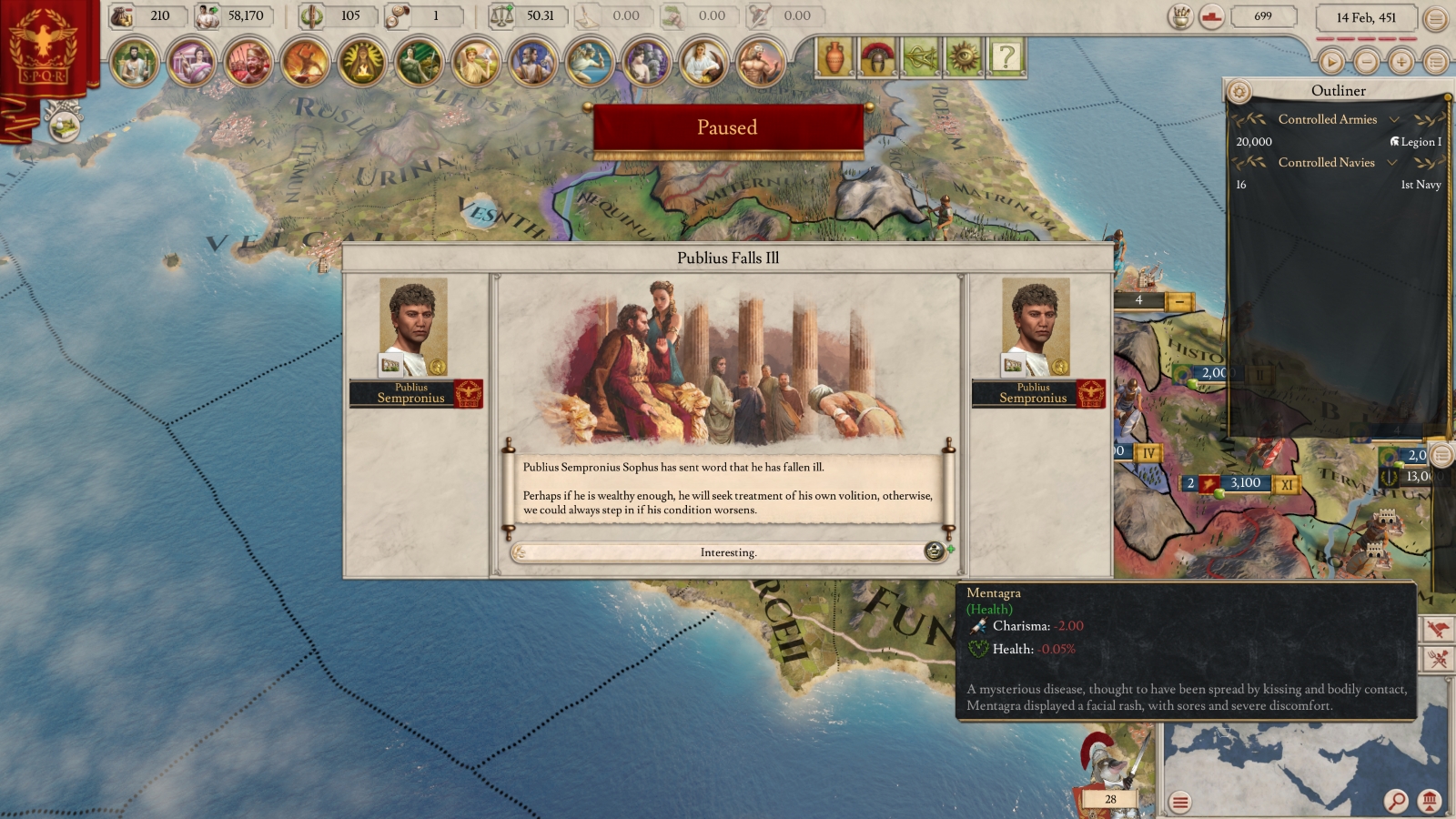 I’m keen to get stuck into the Punic Wars, but of everything tin the Livy update, the continued development of internal politics is what I’m most interested in. After all, Paradox’s ambition for Imperator, and my favourite thing about it, is the idea that as the game progresses, it becomes less about conquering external challenges, and more about handling the inner turmoil of your empire. That was one of the grand narratives at play in the story of Rome, just as much as any ongoing beef with Carthage.

There’s likely to be some more announcements to come about Livy content in the weeks to come. When it’s out, we’ll then be looking towards the 1.4 “Cassander” update - and the game’s first full expansion - in Q2 next year.