Watching all of Imperator: Rome’s wars, trade deals and politicking play out is a lot like viewing a highlight reel of Paradox’s current generation of grand strategy epics. The upcoming strategy game has Crusader King 2’s detailed characters, Europa Universalis 4’s broad national scope, Victoria 2’s demographics and even Hearts of Iron 4’s wargame sensibilities, all transposed to the world of antiquity. It's the latter that stands out the most, however. Imperator: Rome is a game of big wars.

My tour of Imperator begins, appropriately, with the titular republic. In this era, the Romans are fighting over Italy with Greek city-states, Etruscans, Samnites and, of course, Carthaginians. It’s expansion time for the burgeoning republic, but it is far from the superpower it will eventually become. There are plenty of places ripe for conquest, but ambitious rulers will have to manage the Senate if they want to start swallowing up territory. 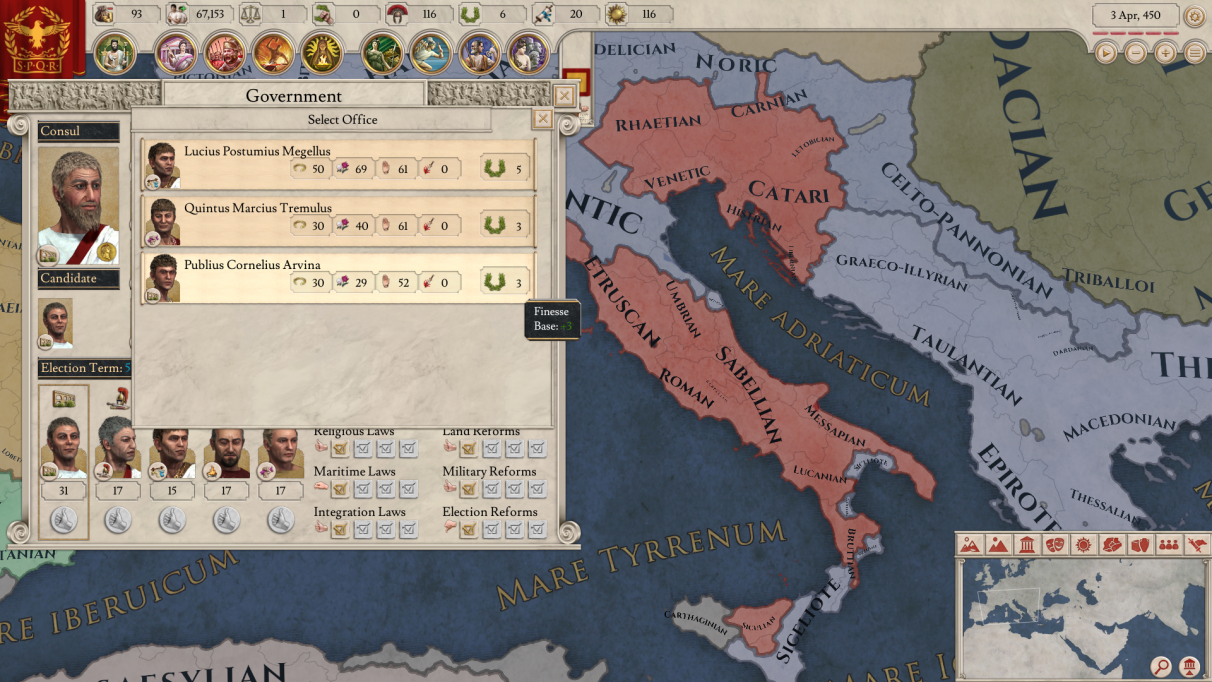 Big decisions need approval from the Senate, with each senator getting a vote, determining whether Rome gets to go to war or make a new alliance. Every senator belongs to a faction with their own agendas and attitudes, but they’re also individuals that are made up of character traits, skills and personal ambitions.

Publius Sempronius Sophus, the Consul, is a wise, charismatic leader who’s probably a little less popular than he’d like. He gets a bit jealous, too. He belongs to the Civic faction, which informs some of the choices he makes and also means that, while he remains at the head of the Senate, Rome will enjoy reduced building times and costs. Publius isn’t a bad guy to have around.

Since you’re commanding a nation instead of playing as a character, you’ll still be running the show no matter what faction or individual rises to power, but that doesn’t mean they’re interchangeable. Some members of your government will be rubbish at their jobs because they don’t have a high enough corresponding skill, or maybe just because they’re corrupt and lazy. The most prominent faction, meanwhile, might keep voting down your laws and telling you that you can’t play soldier. 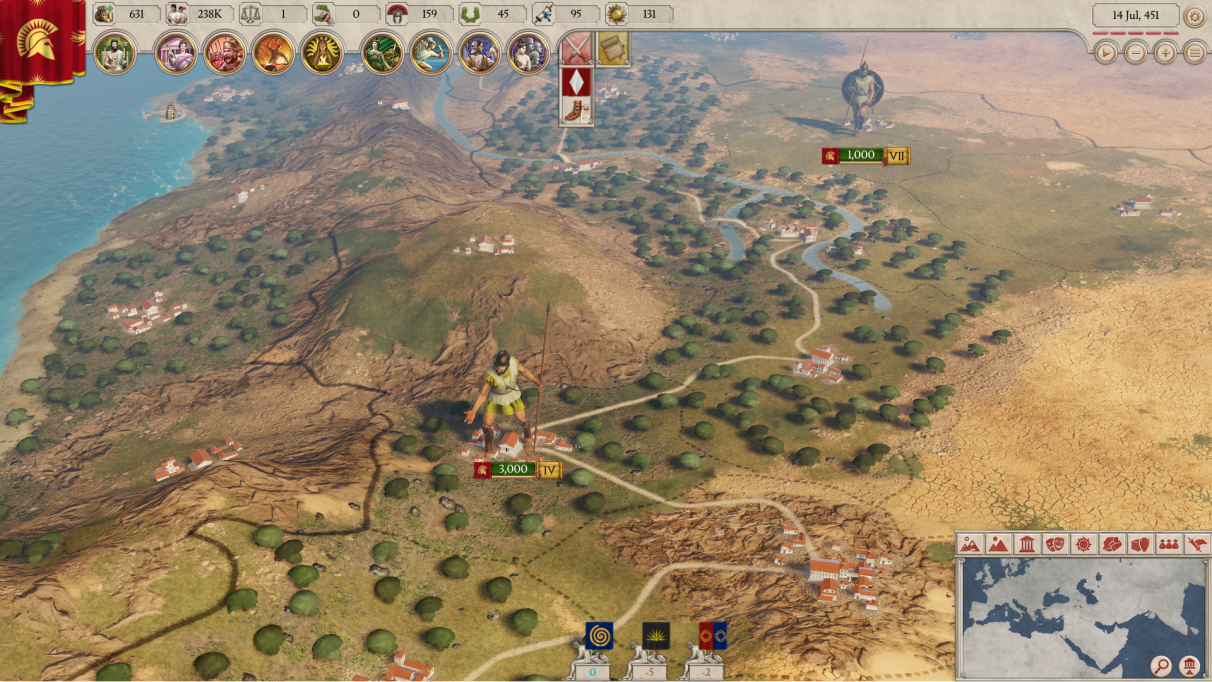 To prepare for war, the military faction gets a boost at the cost of some political power. Interfering with democracy like this is a little bit naughty, so it also generates 'tyranny', a measure of how authoritarian you are. This one time, however, it seems like a small price to pay for giving the military lot ten extra seats on the Senate. That doesn’t guarantee anything, mind, as senators don’t always toe the party line, but it helps a lot.

War is declared on neighbouring Etruria, and the Senate approves. Unfortunately, without a cassus belli, the rest of the world doesn’t view the invasion favourably. Oh well! Things get worse when the Etruscans slip behind the invading Roman legion, attacking a province protected by a much smaller army. The Etruscans have over 10,000 heavy infantry, against the Romans’ 2,000, and even the skilful Roman cavalry can’t make up for that deficit. They’re defeated before the invasion force can turn back and rescue them. The army is completely wiped out, along with its general, poor Lucius Postumius Megellus. 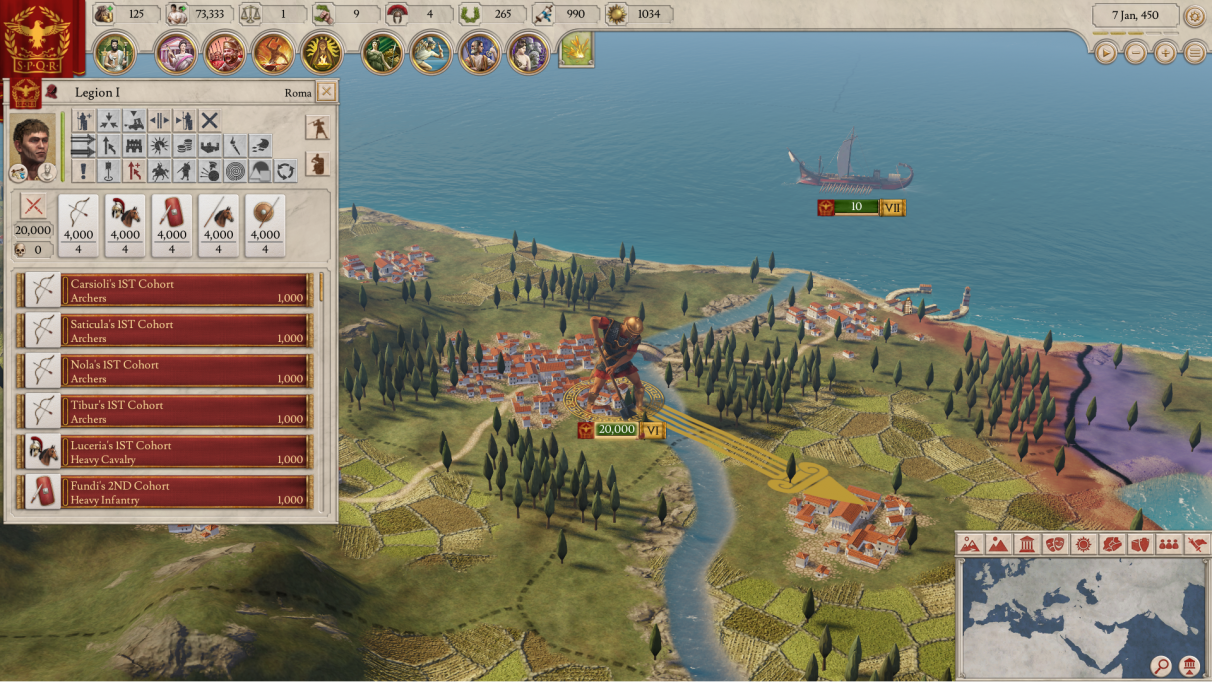 Like previous Paradox grand strategy romps, Imperator’s combat is hands-off, with the outcome determined by things like terrain, leader skills and troop composition. Preparing for these hands-off brawls seems considerably more involved this time, however. The number of unit types has jumped to nine and includes camels and elephants, both of which have unique roles and strengths; they’re not just reskinned cavalry. Each of these nine unit types has a place in the battle line and another unit they’re designed to crush. Heavy infantry, for instance, does well against standard cavalry, which is why Lucius never stood a chance against the Etruscans, even if they hadn’t vastly outnumbered him.

Just as each unit is playing an extended game of rock, paper, scissors, the entire army is too. Ten offensive and defensive battle tactics can be picked for armies, denoted by lovely animals, that determine how they fight. All of these tactics have counters. Hard defence, which is represented by a turtle (of course) is strong against all-out and frontal assaults, while a probing assault will have a better chance of breaking through. 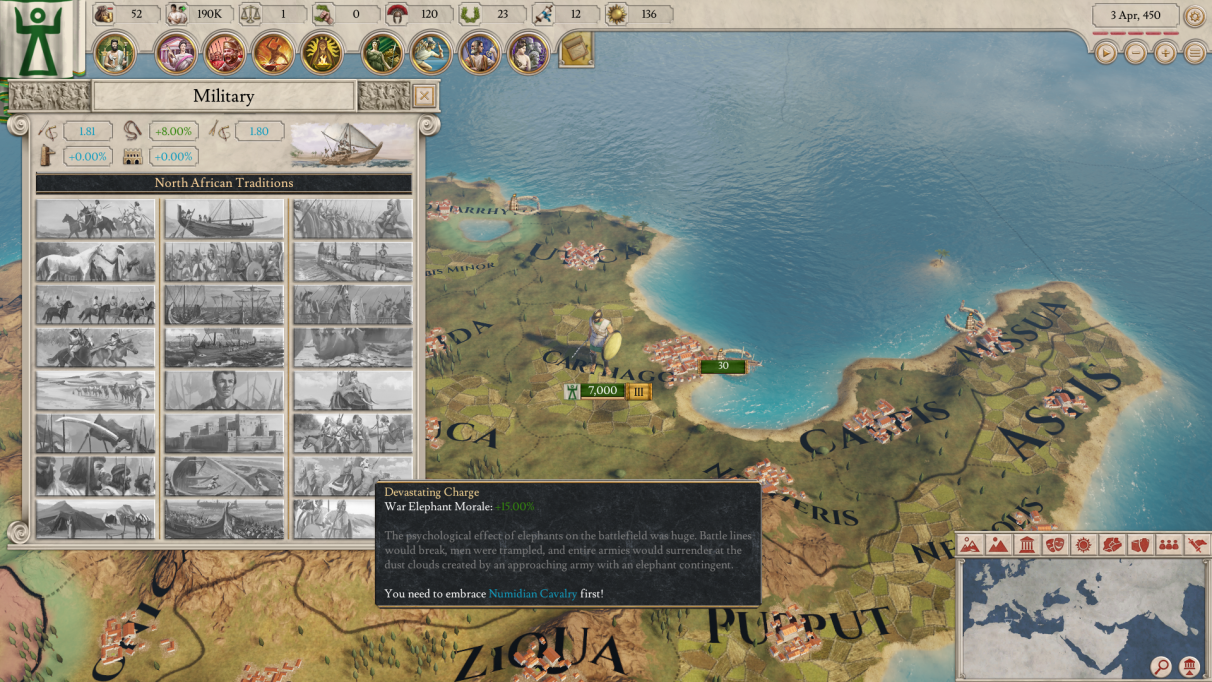 Automation is perhaps the most dramatic change to the military side of things, at least when compared to the likes of Crusader Kings 2 and Europa Universalis 4. Selecting an army or unit allows you to pick an objective for them from a list of behaviours. They can be fully automated, set loose on the world or they can be ordered to defend your borders while taking back stolen territory. There are five to choose from, covering a broad array of jobs, hopefully reducing the micromanagement nightmare that can stem from juggling multiple wars and crises.

It’s one of a few nods to wargames, like Paradox’s own Hearts of Iron series, that alleviate some of the micromanagement while simultaneously offering up more control over units you’ve kept directly under your command. There’s a little bit less pointing and clicking, and quite a bit more doling out orders.

Hoping to avenge dead Lucius, the much larger legion finally makes it back home and collides with the Etruscan army. The Romans have a broad mix of units, while the Etruscans just have infantry and archers; they’re also outnumbered. This will be an easy victory for Rome, I think to myself, like an idiot. It doesn’t go their way at all. The legion goes for an all-out attack, which is completely undone by the Etruscan’s hard defence. The legion is eradicated and its commander ends up captured. 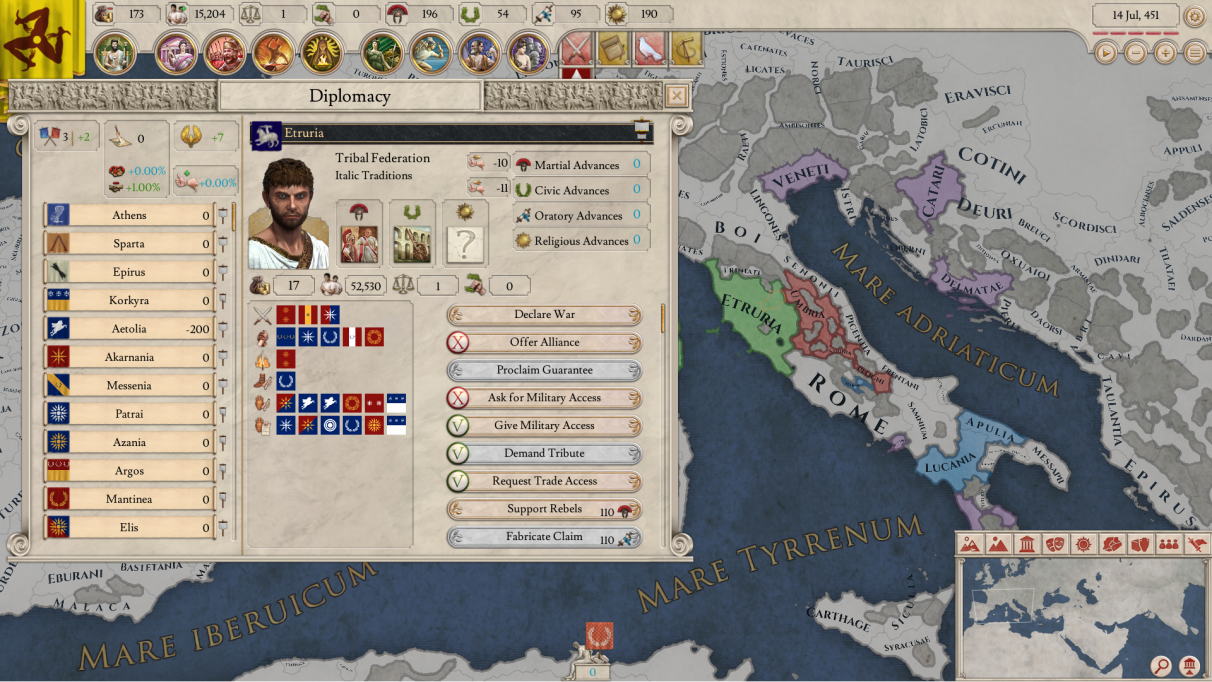 Things aren’t going well for the Romans, so we cheat a little bit and switch sides, ditching the red of Rome and donning the purple of Etruria. The recently victorious Etruscan army is now looking a wee bit worse for wear, so instead of pushing on, the retreat option is selected. It automatically sends units back to the nearest safe city, where they can heal up and bolster their ranks.

At full strength once again, the Etruscans march on Rome itself, fending off the legions and capturing the city. The rules of conquest in Imperator are nice and straightforward: if you take it, then it’s yours. Rome, then, isn’t in purgatory, waiting for the end of the war to decide its fate; it’s now under Etruscan rule. 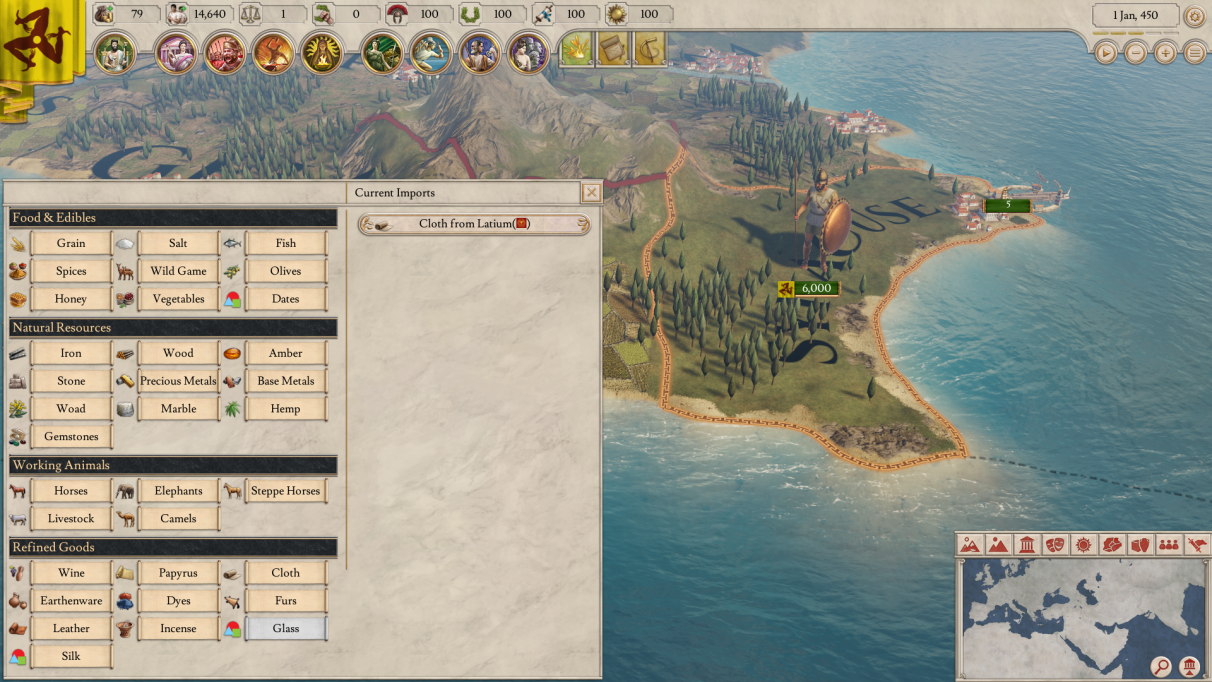 The war has had a noticeable impact on the populations of both nations. Etruria and Rome have both been capturing each other’s troops, filling their cities with foreign slaves, while the people of captured cities, like Rome, have lost their citizenship and been kicked down to the rank of freedmen. These changes put more pressure on empires - you need to produce more olives to keep your slaves content, for example - but can also come in pretty handy. Each population rank provides a bonus for the province, like manpower and tax income, so by bringing in new pops and promoting them, you can tailor your provinces to be cash generators or full of potential military recruits.

Squabbling Italian nations have taken up much of the demo, but that’s just a tiny slice of the world. In every direction, there are other cultures with their own military traditions, religions and governments. North of Italy, the map becomes a patchwork of tiny barbarian kingdoms. They’re in the perfect position to get gobbled up by their southern neighbours. With their lower populations, they have fewer citizens, low research, limited cash - they might be able to square up to the likes of Rome early on, but if they let the Romans get bigger and even more technologically advanced, they might become too powerful to handle. 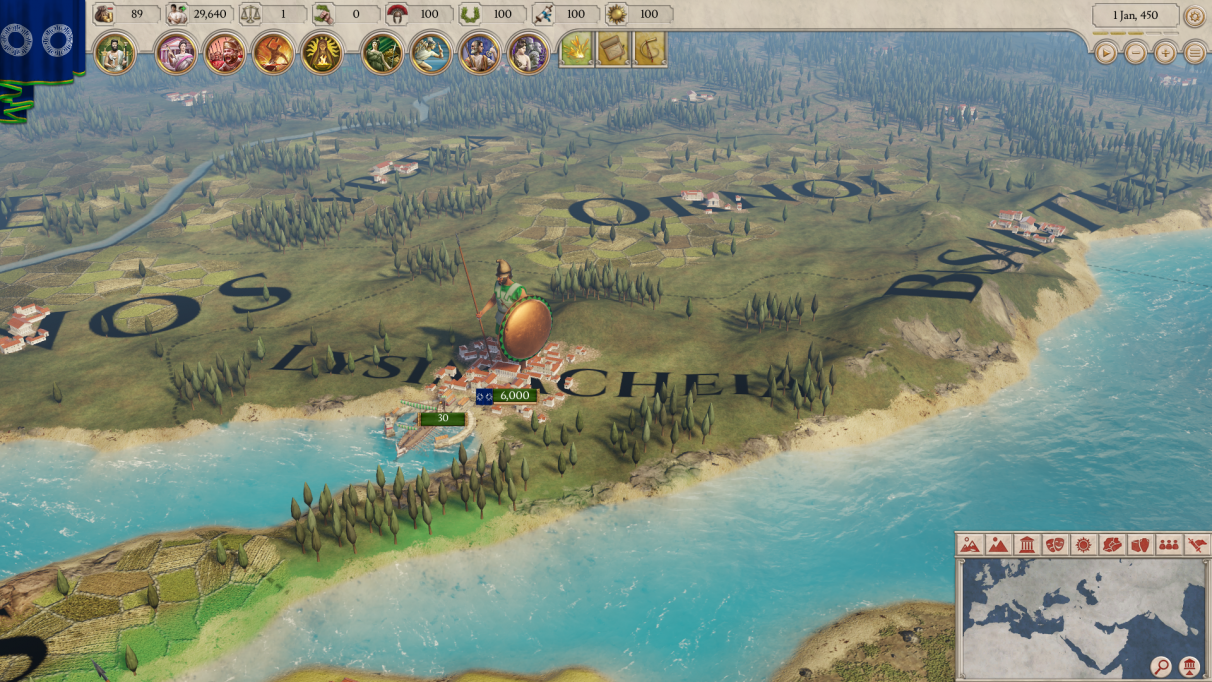 History isn’t balanced, and Paradox’s grand strategy games have always revelled in that, leveraging the disparity in power to create engaging conflicts between huge bullies and brave underdogs. You can’t count these less developed kingdoms out, either. They’re able to form defensive leagues to stand up to aggressive outsiders, and if that doesn’t work, there are other ways for them to survive. Paradox has been working on additional subject types for Imperator, so there will potentially be advantages to become a vassal of Rome or another superpower, at the cost of some freedoms.

I’m a lot more convinced by Imperator than I was back in May, when it was unveiled at PDXCon. Then, it was hard to get an impression of what Imperator really was - there were the ingredients of a great grand strategy game, but it was so early days that it was impossible to tell how they were coming together. It’s clearer now that, as well as plucking the best bits out of Paradox’s back catalogue, Imperator is the rambunctious member of the family. It encourages you to go out and have all the wars, crushing empires for a lark without having to juggle everything yourself.