The next phase of Grand Theft Auto V’s PC glow-up is coming, like a beautiful high schooler in a teen movie taking their glasses off to reveal they were even more beautiful all along. Scheduled to launch in December via GTAV-mods.com, a massive update to the astounding (and free) NaturalVision mod will overhaul the game’s already age-defying looks. We’re talking a remodelled sky, reworked shadows, enhanced textures, transformed lighting (both interior and exterior), and realistic window reflections, amongst plenty of other juicy additions.

So who makes this mod, and where do they get off releasing it for free? To find out, I spoke with NaturalVision creator Razed, real name Jamal Rashid. The 28-year-old Miami native has been working on NaturalVision’s latest update in his spare time for the past 12 months, having spent over three years on the project in total. He and his three-person team do it purely out of passion.

“One of my goals,” Rashid says, “is to make GTA V hold up with other modern open-world games such as Red Dead Redemption 2, Watch Dogs 2, and Forza Horizon 4.” 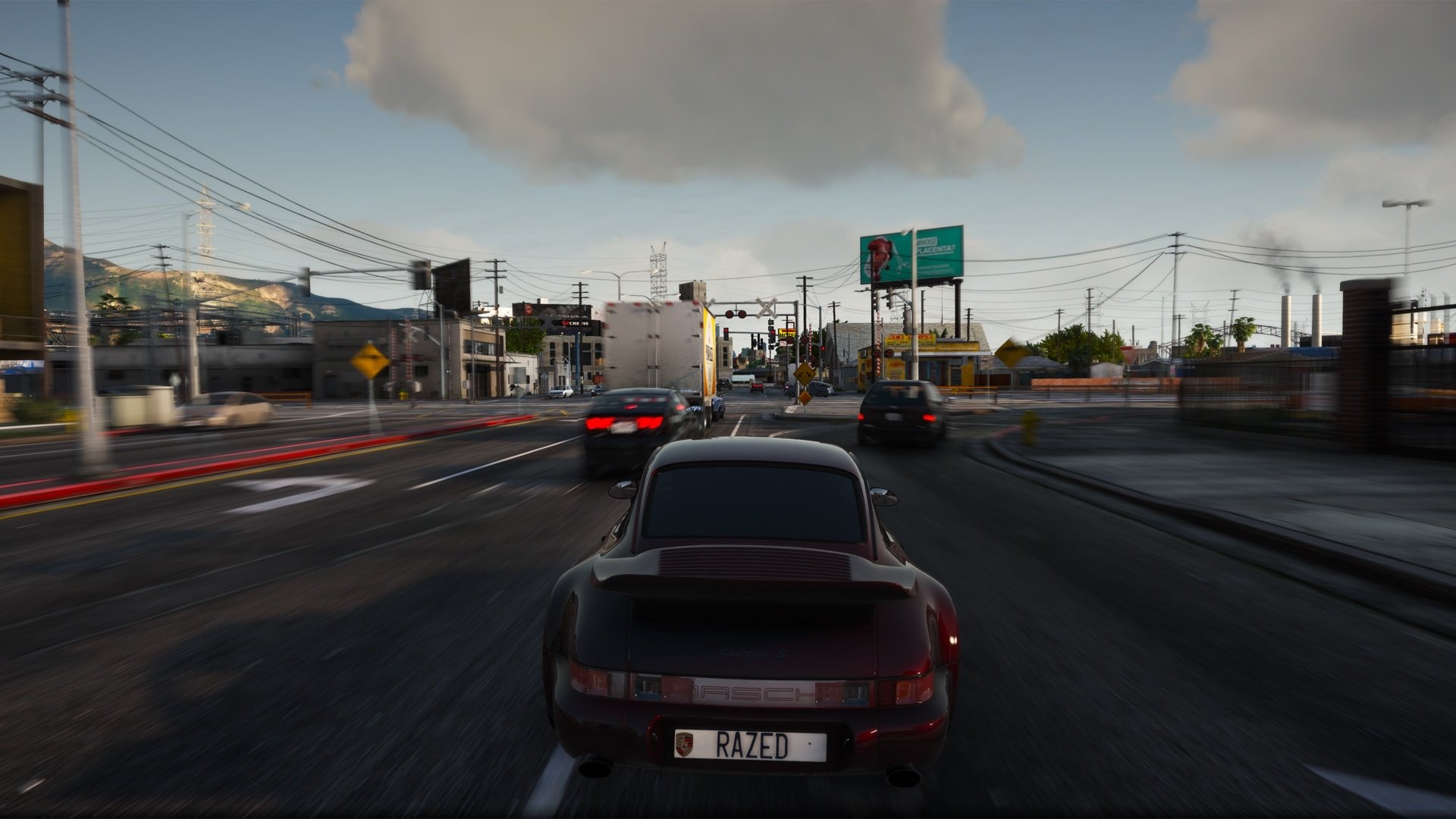 NaturalVision’s improved sky is one feature helping keep GTA V in league with its open-world successors. In the new update, vivid moon rays now illuminate environments. Head to the countryside at night, away from the hustle and bustle of the big city, and you’ll experience a changed atmosphere. The moon is no longer a distant white disc in the sky, but an almost tangible presence. Its beams seem to pour through the tree line before splashing onto the ground. “This was a feature I initially saw in Red Dead Redemption 2 and Metro Exodus,” Rashid says. “I liked it so much that I spent a good amount of time trying to figure out how to implement it into GTA V.”

Together with his small circle of dedicated modders, Rashid has packed NaturalVision’s update with features. For instance, there are more emissive materials around the city. These are basically self-illuminated light sources that diffuse out into the world around them. The bright neon sign stretching down the side of the residential Eclipse Towers skyscraper, and wraparound fairy lights adorning the palm trees lining West Vinewood, are two shining examples. Cruising rain-slicked streets in after sundown is a particular delight, as the lights reflect in puddles and car panels.

Cloud cover is more convincing, too, emblematic of the mod team’s dogged drive for authenticity. “The goal was to try and make GTA V look visually similar to Southern California in real life,” reads the mod’s official description. “In order to achieve this, research on the Los Angeles (Los Santos) and Salton Sea (Sandy Shores) regions was conducted using hundreds of photos and hours upon hours of video footage.” Where some mods dial up the FX and over-saturate the colour palette, NaturalVision is more about emulating reality. Overcast skies still look grim, but avoid the base game’s flatness. “I've developed a better eye for realism over the years,” Rashid says. 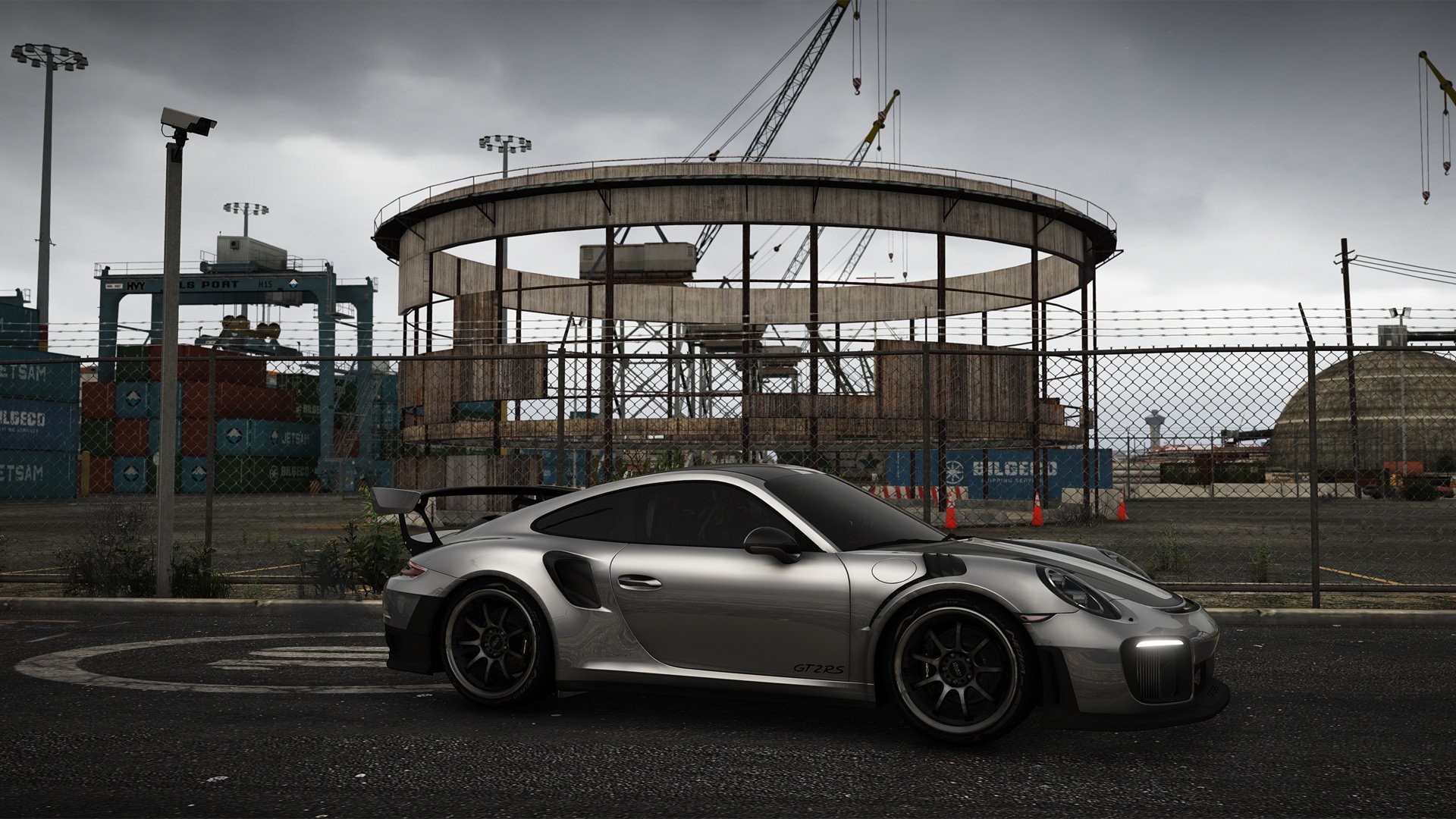 And there are a number of FX tweaks and post-processing adjustments. This gives interior lighting in particular a boost, improving the look of locations like shops and parking garages. The NaturalVision modders even edited dozens of bespoke building models, so windows reflect the world more accurately. These use LOD (level of detail) shaders, so your distance from the window determines the amount of detail you’ll see.

This sounds like a lot, and it is. But for those expecting a spectacular dip in your rig’s performance when running the mod, know that NaturalVision isn’t as taxing as you might think. It doesn’t rely on heavy graphics packages like ReShade, which bundle together multiple intensive effects such as improved anti-aliasing and bloom at a significant frame rate sacrifice (ReShade is packaged into the download file as an optional extra, however, if you have the horsepower for it).

Instead, NaturalVision uses tricks to offset the load on your GPU. Parallax mapping, for example, gives the impression of depth on high-res textures. Pavements and brickwork will subtly adjust position depending on where you’re looking, which to maintains the illusion of three dimensionality without working your PC too hard. 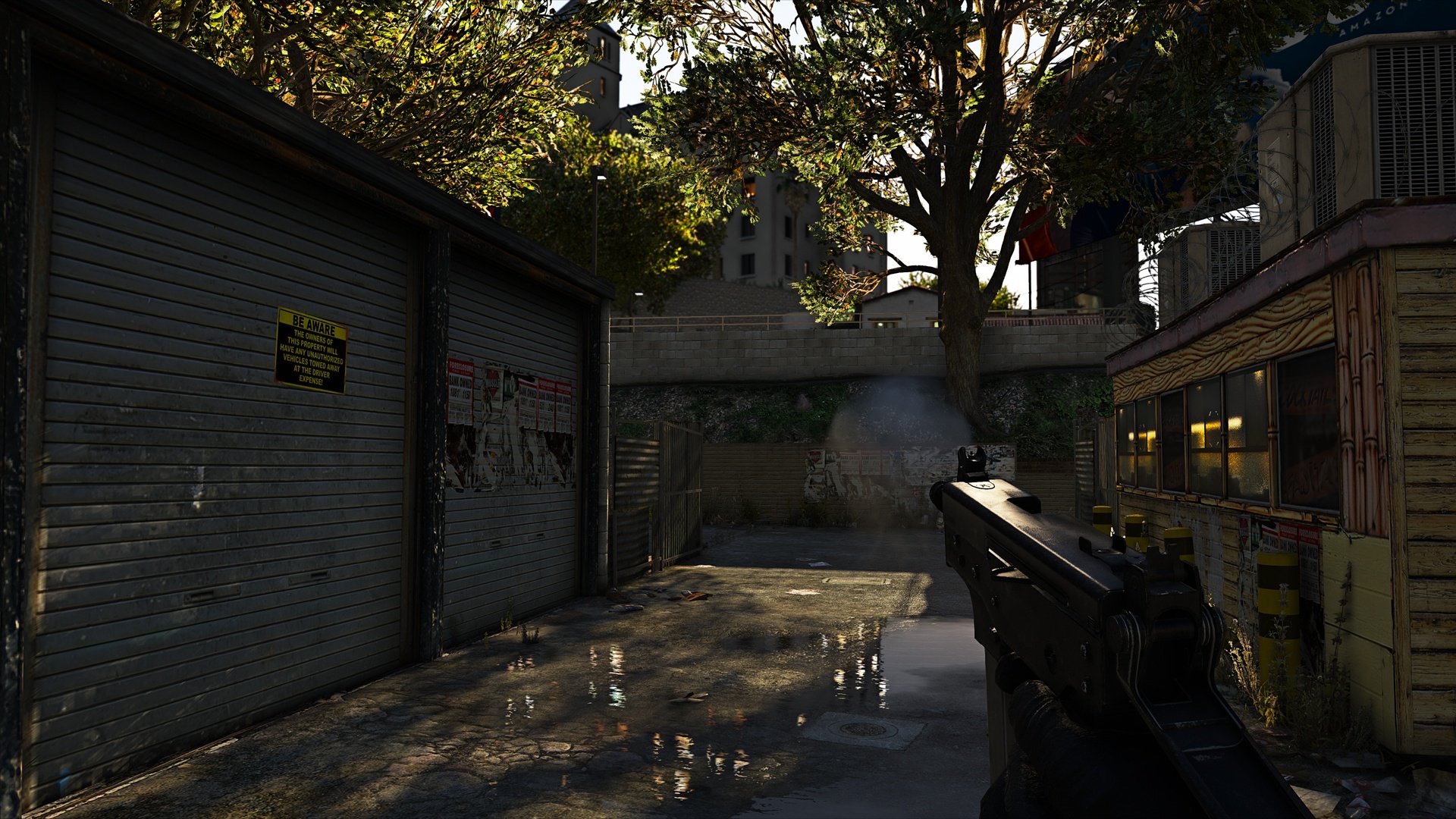 Another challenge has been in making realistic clouds that don’t overload memory constraints. For this, the NaturalVision team rendered a custom cloud dome over the entire world, which is shaded to tell Rockstar's engine where to place the relevant texture and UV map. “The cloud dome prevents us from having to mess with different cloud models and eliminates clouds that stretch in the distance,” Rashid tells me.

Of course, implementing a complete visual overhaul like NaturalVision in a game without official mod support is challenging. Rashid has to restart GTA V every time he wants to tweak and test aspects of the mod, which slows progress and reduces accuracy. It makes what they've achievement all the more impressive.

It’s easy to forget Rockstar’s six-year-old crime sandbox debuted during the last console generation, given how well it holds up without mods. So sure, you can max-out GTA V’s in-built graphics settings and get a game that appears well at home in 2019 -- but if you want to venture into the realm of photorealism, you need mods like NaturalVision. 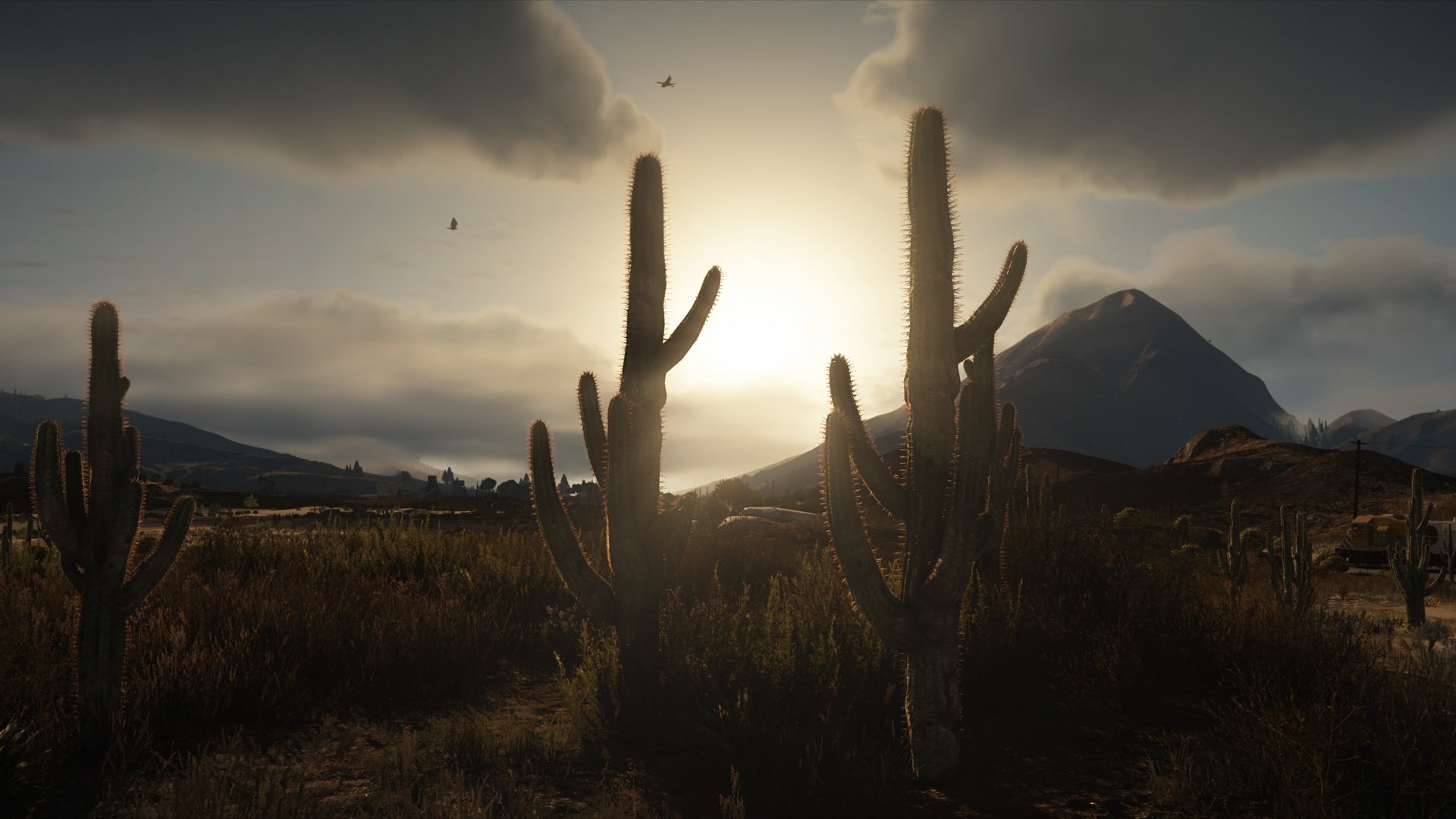 So, is this the last update for NaturalVision? “I think after this update I will give things a rest,” Rashid says. “I know I said that when I put last year's update out, but this time I really mean it. I've given this update everything I've got.” It’s hard to blame him, but the hobbyist modder just can’t seem to resist tinkering. Only a few days ago he went in and overhauled the game’s underwater lighting on a whim. Modding can be a time-consuming business for a perfectionist, and with something like GTA V, perfection never seems too far away. But whatever Rashid’s relationship with the game going forward, as long as modders everywhere continue working their magic, expect GTA V to keep on getting better.