Destiny 2 is out on PC today, bringing Bungie’s space killin’ to even more folks. Matt and Brendan have been zapping aliens and robots on the sly (aka the PS4), but they’ve had different reactions to the story and dialogue of this first-person blockbuster. Matt is fond of space wizardry but Brendan is gagging at each and every line. What better place to have a constructive chat about this disagreement than The Internet?

Brendan: Hello Matthew. I’m using your full name because I’m preparing to be a condescending spoilsport who will tell you to stop liking the thing you are currently liking. Let’s go!

Matt: Hello Brendy! I’m being more colloquial because I’m hoping to inject some joy into your cold, dead heart.

Brendan: But I guess we should explain ourselves first. Destiny 2’s story is about a giant orb called The Traveler, which gets shoplifted by an angry alien called Ghaul. He wants to use its Light (the magical energy that gives players superpowers) to become emperor of space, more or less. The players - called Guardians - must stop him. What do you like about this tale? Or is it the bits of dialogue or lore in between that you really enjoy?

Matt: So, I should say upfront that I fully recognise Destiny is Dumb. I also want to say that of all the factions and characters the plot could have focused on, the imperialistic space rhinos - The Cabal - are by far the least interesting. What I’m really sold on is the broader world and history that Destiny has built up over years of expansions for the previous game, and the ways that Destiny 2 pokes at that.

Brendan: I’m glad there’s depth in the background for fans and returning shootfolk. What I found as a relative newcomer, though, is that the moment-to-moment dialogue is soaked in cliché. I get that we aren’t supposed to put too much faith in the story to begin with - this is a game about shooting heads with your best mates - but every time Nolan North or Lieutenant Daniels spoke to me it dragged me out of that zen-like state of trigger-pulling. The cutscenes aren’t much better. At one point the main baddie, Ghaul, says: “We are not so different.... Your Traveler and I.” I mean… I just… I don’t…

Matt: I… I can’t defend that line. Or many of the others.

Brendan: There's another bit where he screams: “Witness the dawning of a new age!” Which I’m pretty sure is, word-for-word, a line by Scar in the Lion King (okay, almost) . Why do you like this stuff? Explain yourself!

Matt: Okay, so the dialogue is shonky. Some of Nathan Fillion’s lines (he plays an important robot) made me smile, but I could happily listen to Nathan Fillion do anything. That aside, the clumsy writing is enough to make my eyes roll - but I suppose I just dismiss it rather than finding myself removed from the experience. I still get a kick out of witnessing the dawning of that new age, no matter how ham-fistedly Ghaul introduces it.

Brendan: You say you like how it pokes the wider world and history of the series. Do you mean there are returning characters who develop in some way I haven’t understood? Gimme some examples, yo. Help me like these people.

Matt: Kinda? The problem/appeal lies in how characters and events are explored through obscure little nods and titbits. When fighting the Hive, for example (space wizard zombies, some of which are immortal gods) you’ll encounter some enemies whose names relate to someone/something called ‘Savuthen’. Dig a little further and you’ll find that she’s one of the sisters of Oryx. Oryx himself being the dad of a Hive god you kill in the first game.

Brendan: So you are telling me you kill an entire family.

Matt: Exactly! Although, Savuthen hasn’t actually shown up yet. The thing is, I can totally see why the connections between the bad guys you’re fighting and the good guys you’re helping won’t draw a lot of people in - it really is mostly background stuff. But then you find yourself starting to think about why a Fallen Kell (leaders of the four-armed aliens) has betrayed the Kell of another house, or why those Vex (time-travelling robots) are simulating a human research team, and the world starts to feel like it contain these interesting, interconnected mysteries.

I’ve slipped into describing stuff from Destiny 1, so I guess at this point I’m really defending the Destiny universe as a whole rather than the central story. 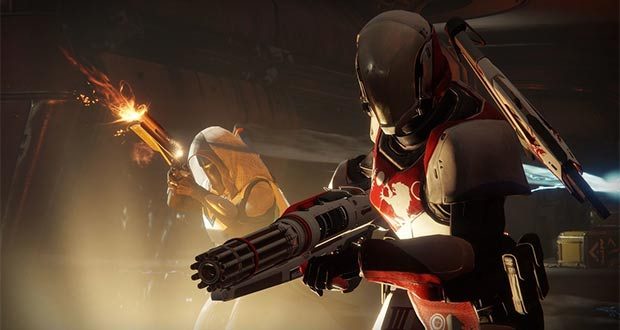 Brendan: That’s fair. The writing of a game does include its entire world, as far as I’m concerned. I must admit, sometimes it "tricks me" into liking it. At one point, Scar-Ghaul has your boss, The Speaker, trapped in a throne room, interrogating him. The villain seems to be asking: How do I get the magic Light? The Speaker then launches into an absurdly Yoda-like speech. “Devotion inspires bravery,” he says. “Bravery inspires sacrifice. Sacrifice… leads to death.” At this point I was mid-eyeroll, when he followed up with: “So feel free to kill yourself.” Which I thought was fun, if not exactly sensible.

But then it introduces a tiny robot with a split personality who tries to be funny and I want to put her underneath my boot so that she will be quiet forever. I think that’s what I found most grating. There are a lot of jokes that just don’t land. Destiny the First (or what I played of it) was unfunny because it was po-faced. I feel like this is an improvement - but it still misses the mark often. How does it compare to you?

Matt: I’d probably say it still takes itself too seriously too much of the time, at least in the main plot - though I’d be more on board with that if it had done a better job of answering some of the questions it raises. How does a society of immortal warriors deal with having that immortality taken away? In Destiny 2, they keep on doing what they’ve always done - and of course it doesn’t even matter to the player character, who (spoilers) gets their powers back almost straight away.

Humour-wise, I’m reminded of the time I went to see Tim Vine. Maybe one joke in ten would be funny, but if you can ignore the clangers then what’s left is still entertaining.

Brendan: That’s some clanger-to-lol ratio though.

Matt: Which is made worse by Destiny not delivering about 60 jokes a minute. Oh well, at least we have Nathan Fillion complaining that he can’t get any hugs. 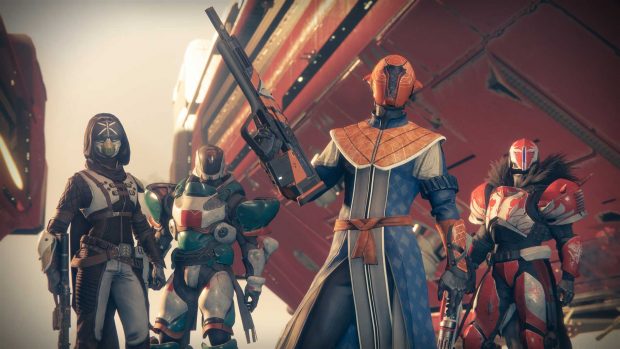 Brendan: Okay, let’s wrap this up. We have discussed the topic like grown adults and neither of us have threatened to murder the other. I call that a success. But we haven’t reached a solid conclusion. Is it hot trash or tasty junk?

Matt: ‘Tasty junk’ nails how I’d describe the bombastic scenes from the main story, and I think I’d even go one food tier higher for the world-building side of things.

Matt: Artisanal street hot dogs, though maybe they’ve ran out of onions or something.

Brendan: I’m not sure I agree. I still think it’s a bit rubbish. I think we just have a clash of opinions here.

Matt: No Brendy… you see we’re not so different, you and I.