I’m hiding in a bush when a man in a garish tracksuit runs past. The fool. I step out and spray him with bullets from an uzi. He’s dead in a second, exploding like a piñata into a shower of guns ‘n’ goodies. I’ve reached the final 20 survivors, and yup, Radical Heights is a battle royale, no doubt about it. But this rough and ready deathmatch has been in development for just five months. That dead man’s tracksuit? Identical to my tracksuit. The bush? An ugly placeholder of blurred leaves. In five minutes I will be murdered in a non-descript building made of textureless grey walls. Some might call the shooter unready. Zach Lowery, of developers Boss Key Productions, calls it “XTREME early access”.

“For us, early access is our way of saying: ‘Hey, this game is far from finished, right?” Lowery tells me over Skype. “Our art’s not done, we don’t have all of the features in there that we want, but we’re going to drop a roadmap to give people an idea of what’s to come. 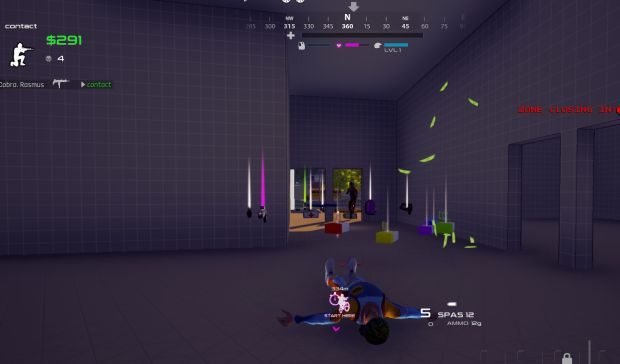 “And we wanted to make sure whatever we put in at an early access state was understandable. Because some early access games, they’ll put things in and it’s super confusing. For us, [it was about] making sure we didn’t put anything in that you didn’t understand. It could be a grey box, but if a player walks up to it and has no idea what to do with the grey box, that’s a problem.”

While there are still many grey surfaces in their fresh-faced free-to-play game, much is also spattered in colour. This is a future world suffering from a retroactive adoration for the 1980s. To make up for a faltering economy, a shady organisation has invented a battle royale based on the golden age of TV gameshows. As you play, events pop up, like bike races or shoot-outs, with a brash announcer’s voice bellowing through the dome in which contestants fight. There are “mystery doors” which take 10 seconds to unlock but which also play booming, conspicious music while you wait. This is Playerunknown's Battlegrounds, if Brendan Greene had been a fan of perms, BMXs and Supermarket Sweep. 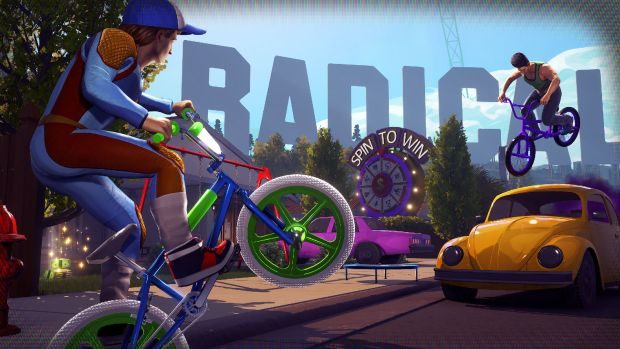 “We wanted to make it more than ‘I put my reticule on you and if I can out-click you, then I’m the best around’,” says Lowery. “So we wanted to treat it more like a sandbox and make sure we were giving people toys to play around with and have fun and kind of craft their own stories – because 99% of people who play a given round are going to lose.”

Making things more comfortable for the chicken dinnerless is a sticking point. Even if you’re ruthlessly gunned down in 12th place, like I was in that grey non-building, you’ll still earn money from all the kills you achieved or gameshow events that you won. You can then carry that cash into later matches and spend it on guns from vending machines peppered around the map. 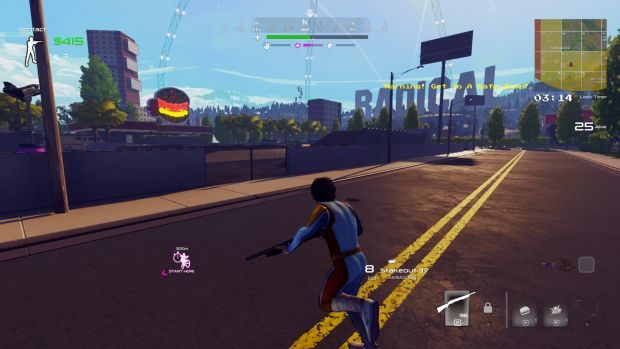 “So we want to make sure there are things in there that are enjoyable and it’s not just ‘crouch in a corner for ten minutes and then sneak across a field of grass and then die.’

"We’ve discussed BMX bikes giving you adrenaline, or prizes that can only be reached by hitting certain ramps and doing a backflip through a flaming hoop or something like that.”

In other words: ‘battle royale, but sillier’. That brief might be enough for Boss Key, but it remains to be seen whether it’s enough for the adrenaline-hooked poultry lovers of the world. This genre has exploded in recent times. Sky-diving with your enemies and getting summarily sniped from afar has become surprisingly fashionable. With that in mind, isn’t Lowery worried the genre is becoming overpopulated?

“No, because ultimately no one knows how big the ocean is,” he says. “There are two giant ships out there right now and then there’s us and we’ve made a splash and we’ve proven that there is an audience and there is a possibility to have another boat out in the ocean.

“But what we also feel pretty good about is that... we have lots of ideas in our mind how we can expand Radical Heights. The sky’s the limit, kinda, we have a lot of game mode ideas we want to try out.” 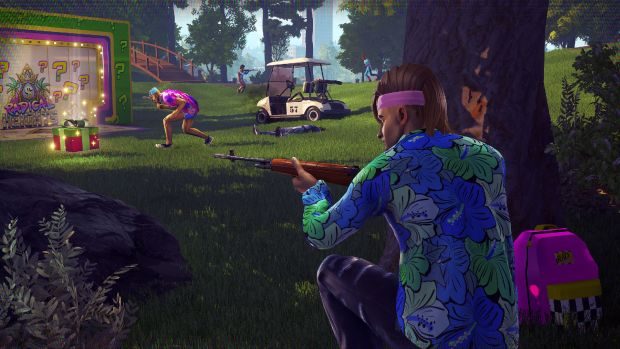 Those ideas will be woven into the game as it currently exists. Or semi-exists. While the hook of the deathmatch and its surrounding silliness is present, the amount of rough edges make this one of the most noticeably undercooked early access releases in memory. Five months from “initial pen-to-paper design discussions” to downloadable bullet playground is a very short turnaround for a videogame of this kind. In a display of unabashed chutzpah, Boss Key dubbed the recently released game as “XTREME early access”. An in-game news ticker invites players to “embrace the jank”. Is that part of the comedy, I ask. Or is it an ambitious bit of spin?

“I think it’s both,” says Lowery. “I think it’s part of the comedy because if you look at early access games and you watch people who are streaming those games and playing them, they’re forgiving, right? Because people know that they’re not finished. So when you take a jeep and you crash it into another jeep in PUGB and it skyrockets you 100 metres into the air, people are laughing.

“Yeah, you’re going to lose or whatever, but for us, we knew that we were going to make this game fast and we were going to focus on the important core of the game that we needed to be playable, and that was: looting, shooting, cosmetic collection and customisation, and then our gameshows.” 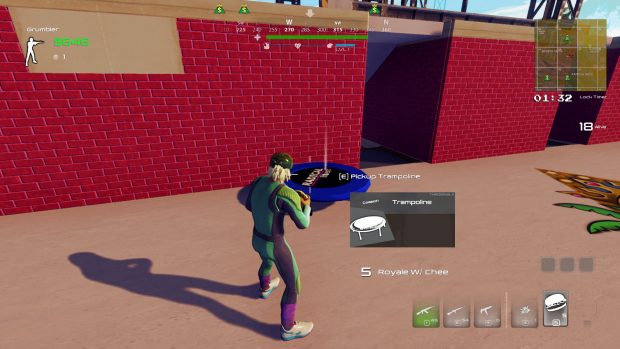 So far I’ve been ignoring an important talking point. LawBreakers, the studio’s last big team shooter, performed badly. In their own words it “failed to find enough of an audience to generate the funds necessary to keep it sustained.” So the team stopped working on it altogether. At the time, Lowery was a senior animator on the team. One of the problems, he suggests, is that their bullet-soaked, low-gravity hero shooter just wasn’t accessible enough.

“I think one of the major things that we learned from LawBreakers - that I know I personally took into Radical Heights development - was accessibility. We wanted to make sure that we did not over-complicate things and that Radical Heights was very accessible. That goes back to our early access approach. If this is a grey box, then I need to understand what to do when I walk up to it. That was our litmus test when we put something in. How complete does it have to be to really sell the understanding of it.” 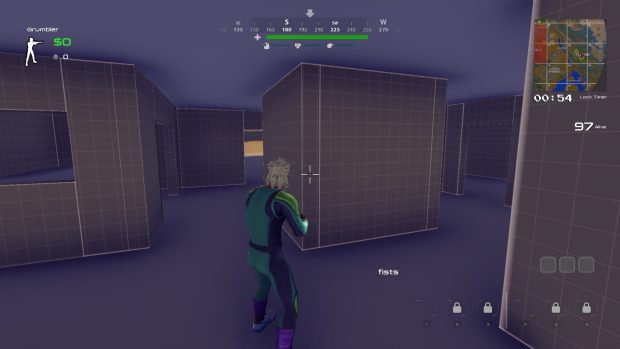 However, inaccessibility alone doesn’t kill a game. The studio has loudly asserted they’re self-publishing the new battle royale. And in their announcement of LawBreakers demise they dismissed the possibility of the shooter going free-to-play, saying “a change of this magnitude takes publishing planning and resources to do it.”

This suggests there was a rocky relationship between the studio and publishers Nexon. Or at least a relationship that degenerated in some way. But Lowery is tight-lipped about those particular problems. Even when I ask about the general sentiment within the studio, at the level of an employee, rather than a project lead, he avoids the question. 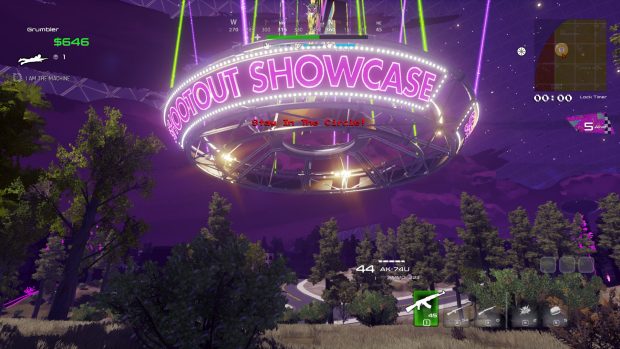 Likewise, when I ask if Radical Heights was released earlier-than-planned as a result of LawBreakers’ poor performance, Lowery denies the connection. For him, the reason contestants of this homocidal gameshow are seeing so many grey surfaces, is really a result of a change in “philosophy”.

“No,” he says, “it was purely because we were shifting our development philosophies at Boss Key. We’re trying to understand that the market has changed and the way that people want to consume their games has changed, and that a lot of audiences want to be included in that development.

"So that’s what we’re trying to do here: make games with smaller teams and make sure we’re getting them into people’s hands sooner, rather than later.”