MachiaVillain is primarily a game about remembering to sweep severed heads off your porch. Too much visible viscera will scare off the next crop of guileless victims to your hand-crafted house of horrors, y'see. Shamelessly in the tradition of Dungeon Keeper (still my go-to PC gaming nostalgia, along with X-COM), MachiaVillain is a management sim in which the baddies are the goodies. You shepherd a small herd of flesh-eating monsters around, building both an ever-growing lair for themselves and a faux-home to lure in unsuspecting humies with which to feed your festering menagerie.

It runs much further with its inverted horror movie concept than does the usual "ooh, what if you were the bad guy, eh?" tomfoolery, though witless humour and a needlessly fiddly user interface get in the way of the gruesome good times.

Bullfrog's classic game of monster management Dungeon Keeper is the unavoidable inspiration, but to its great credit, MachiaVillain doesn't walk the same building sim/real-time strategy paths as quasi-DK successors Dungeons and War For The Overworld. It puts me a little more in mind of Prison Architect, which is to say it's more to do with stage-managing the daily routines of your inmates/minions than it is raising vast armies with which to unleash hell. Sloppy base design, gaps in construction and generally throwing everything at the wall to see what sticks is a fast track to hungry, insubordinate ghouls and escaped human prey sounding the alarm.

MachiaVillain makes a poor first impression, what with its glaringly poor English translation, tired mwah-ha-ha humour and an interface that has less consistency than a monkey using a typewriter on a bouncy castle. My five-year-old daughter has a superior grasp of left and right than does MachiaVillain's laboured mouse button-switching.

It also does a poor job of explaining some of its most essential concepts, specifically that you need the front section of your base to act as a cabin-in-the-woods-style honeypot trap for victims, while you keep all the monster-specific stuff like butchery rooms and sinister laboratories hidden a few rooms deep, behind the scenes. I ended up restarting after a few hours as, until the penny fully dropped, I'd generally wound up murdering people on the road outside my scattered-to-the-far-winds house, and then having to spend most of my time manually ordering my creatures to mop up all the blood, in order that the next crop of fools didn't run away immediately.

No hard feelings though: the game is a different, and much more enjoyable animal once this stuff is fully understood, but you might not go into as blind as I did. The info you need is all in the game, it's just that it leaves a lot of it hidden in sub-menus and tooltips while insisting on dragging us through the usual 'here's how to move the camera' rigmarole. 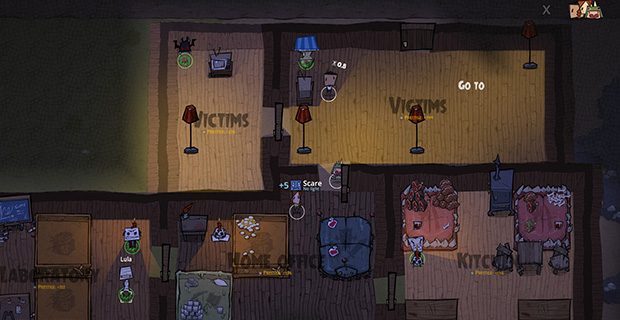 I started off having a lousy time in MachiaVillain for these reasons, but I grew to rather enjoy myself in spite of them. Fans of seeing me get yelled at by hundreds of people may recognise this as eerily similar to my experiences with BattleTech, the difference here being that it was about 3 rather than 12 hours before I'd shovelled my way past enough cruft and jank to reach the good stuff.

The essential tension of MachiaVillain is expanding your lair and your coterie of monsters, and most of all providing a steady (and living) food supply for said monsters, without alerting the wider human world to your existence. The conceit here is that your creatures are effectively telemarketers as well as psychopaths - like there's a difference - setting up a confidence trick that lures victims to your house by offering them free holidays or cheap rent. All told, it's like trying to buy a suspiciously-affordable second-hand iPhone via Gumtree.

And so you assign 'jobs' to your assorted mummies, skeletons, zombies, vampires and Vorhees-likes, based on their specialisms. Digging rocks and felling trees, clearly, but also working in the lab to research new tech, writing and posting leaflets for the human-luring con, sweeping up the heads, brains and blood left behind after kills, and a raft of more crafting-specific duties required to access the higher-end constructions. Your monsters are as blindly obedient as a billionaire watching Fox News and won't do anything autonomously, so it's about finding a balance between routines such as cleaning and cooking (gruesome corpse-butchery, specifically) and ad-hoc tasks such as mining specific minerals or building more complex parts.

There's a touch of the Don't Starve et al to the latter, in that you need x to create y, but you can't make x until you have u, v, and w. You know the score. You also need to set specific tasks running on specific equipment in specific rooms, in addition to assigning monster roles. I'd say it gets over-involved here, given how much else you have to do to keep your squad healthy and happy: just a couple too many plates to spin, when it might be preferable to just unlock new things at certain milestones. But those are The Old Ways, and clearly I cannot speak to the decisions and playtesting that took MachiaVillain down this path.

The bitty interface certainly doesn't help, but I did hit an extended mid-game hump, when the amount I had left to do in order to be able to build a fridge or a secret door seemed exhaustingly extreme. The early phases (once I'd fully grokked the rules) of creating a rudimentary murder-house were a lot more compelling. The thing is, you can't simply leave your ghouls to snack away on brain and blood when your adverts coax a few hapless innocents into your faux-home.

For one thing, they won't attack unless told to, and for another the humans will scatter sharpish if they spot one of your minions and have an unimpeded escape route. So you need to hide your murder-folk away when you know victims are en route, which is itself a process that involves a couple too many clicks for its own good, then jump 'em once your prey is safely inside.

The majority of the game's best ideas are in this side of things, in that you can construct these ambient traps, such as TVs and bookshelves that will temporarily capture one person's attention, while the rest of the pack move on to other rooms. In combination with this, you can unlock special powers for your monstros that allow them to hide in plain sight or briefly mummify someone. It can become a sort of squad-based Hitman, in which you're striving to usher people along tailor-made paths then take 'em out one-by-one without getting seen. 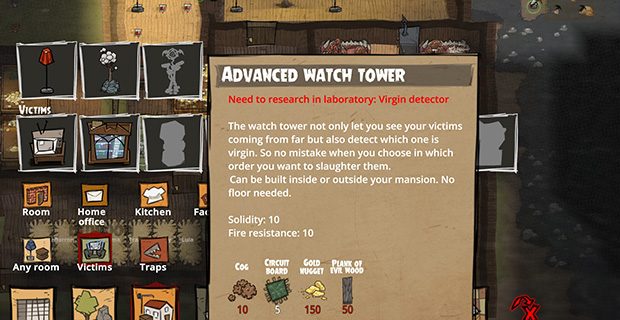 Unfortunately, puzzle-slaughter becomes quite a grind, mostly because it's necessary to have fresh humans turn up every few minutes, leaving only limited time to build and design your traps (not to mention everything else needed for monster happiness and general crafting). I know there is great satisfaction to be had from a marvellously elaborate Saw house, but even with the (absolutely vital) pause-to-order controls often it's all a bit too hectic to do much more than messily slaughter everyone within the first couple of rooms of your lair. Same goes for coping with your monsters' individual traits, Rimworld-style (as well as equipment to mitigate or amplify them). More often than not, matters of loyalty, stamina and specialisms don't amount to much more than more meat for the grinder.

There are a ton of great ideas here, and I particularly dig this whole concept of a management game that's about a production line for silent slaughter rather than cash-generation as such, but the best stuff can struggle to breathe through the excessive micro-management. The stereotype-heavy gags and iffy translation make things more of a drag than they deserve to be too. It's well worth persevering with MachiaVillain despite this - it has bravely declined to take the easiest Theme Monster road, and a wealth of curious possibilities do spin out of its unusual crafting/people-eating setup.

MachiaVillain is out today on Windwos, MacOS and Linux via Steam.