On my third or fourth game with Throne Of Eldraine, I realised I was going to lose if my opponent just kept stuffing his own damn cat into an oven again and again.

Throne Of Eldraine is the newest Magic: The Gathering set, coming to both the physical game and, more importantly for our purposes, Magic: The Gathering Arena. It's a mix of Arthurian high fantasy and fractured fairy tales. The barrow witches at RPS sent me on a quest to play it in a preview event arranged by Wizards, and I have come back with a wealth of first impressions.

I built several decks using Eldraine cards and played them against various journalists and streamers taking part in the same preview on Magic: The Gathering Arena, ahead of the set’s release on September 26. We got in a few games of sealed (in which one opens six packs of random cards and uses the contents to build a deck), as well as draft (in which many more packs are presented to the player, who chooses one card out of each pack).

Eldraine’s promise of remixing fairy-tale ideas came up almost immediately, and it certainly delivers on its theme -- even if the nature of a card game leads to that theme being jumbled in unpredictable, dark, and sometimes amusing ways. In one match, my opponent was slowly draining me to zero hit points, through a combo of a creature card that knocked my life down by one when played, and an artifact card that sacrificed a creature. It took us in a decidedly Lynchean direction with the aforementioned extremely and thoroughly baked cat. In another I was beaten to death by a redcap wearing a pair of glass slippers. 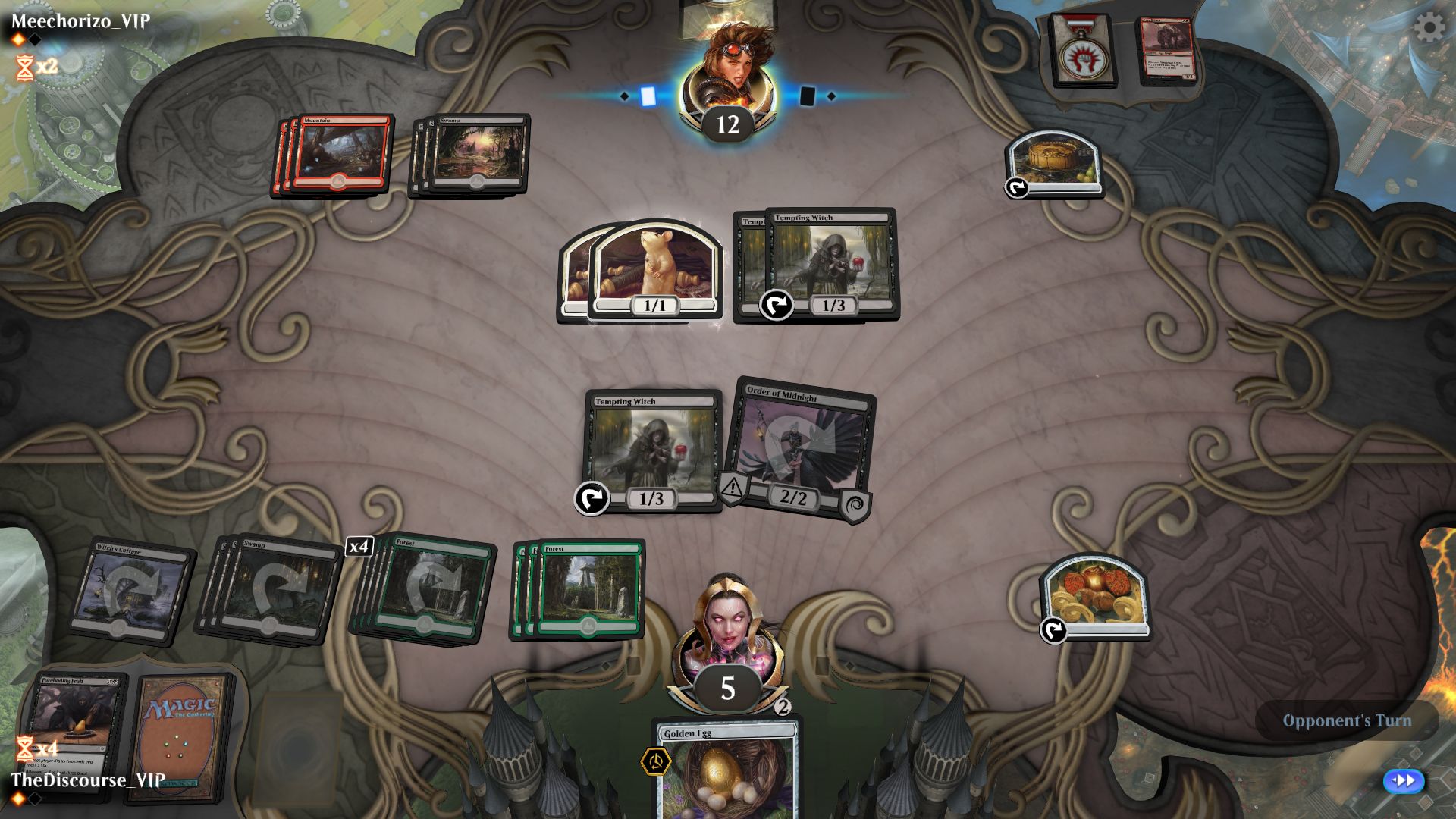 But theme isn’t enough to carry a Magic set, and Eldraine played well, leading to interesting games with intricate decisions. There were lots of close, satisfying games with players jockeying for position. One of Eldraine’s main mechanics is “food,” tokens which are created by various cards and can be sacrificed to gain life. Before playing with the actual cards, I expected food to either not matter very much, or to lead to grindy games only ended when one player eventually achieved an overwhelmingly superior position on the battlefield.

In practise, however, I often found myself playing aggressively, hoping my opponent would hit 0 life before I did. Life matters a lot in Eldraine, more than in the average Magic set, often acting as a ticking clock pushing you to act. More than once I felt I had to make riskier plays and push for a win.

I get the sense that Eldraine will really please diehard fans of Magic who delight in learning the intricacies of a format. There are a lot of incremental advantage and small plays adding up to big shifts. Games aren’t defined by who has the biggest, bombiest, high-impact rare cards, but by who can assemble the deadliest machine out of innocuous-looking commons. Take Garruk, for example, a marquee planeswalker and Cursed Huntsman. Garruk was in my second sealed deck. On paper, he looks like a positively monstrous card. And some of the time he was. But it didn't feel like I had slammed the door shut on my opponent just by playing him, or that the game now revolved around this planeswalker. This bodes really well for the format.

Playing draft allows for much more focused and powerful decks, letting players explore synergies and deck archetypes within a set. It also lets Eldraine really bloom, presenting unusual strategies and some ill-advised garden paths to follow. It’s hard to say how viable those lateral strategies are going to actually be, but I had fun trying to put them together, even if they hurt my win percentage in the moment. 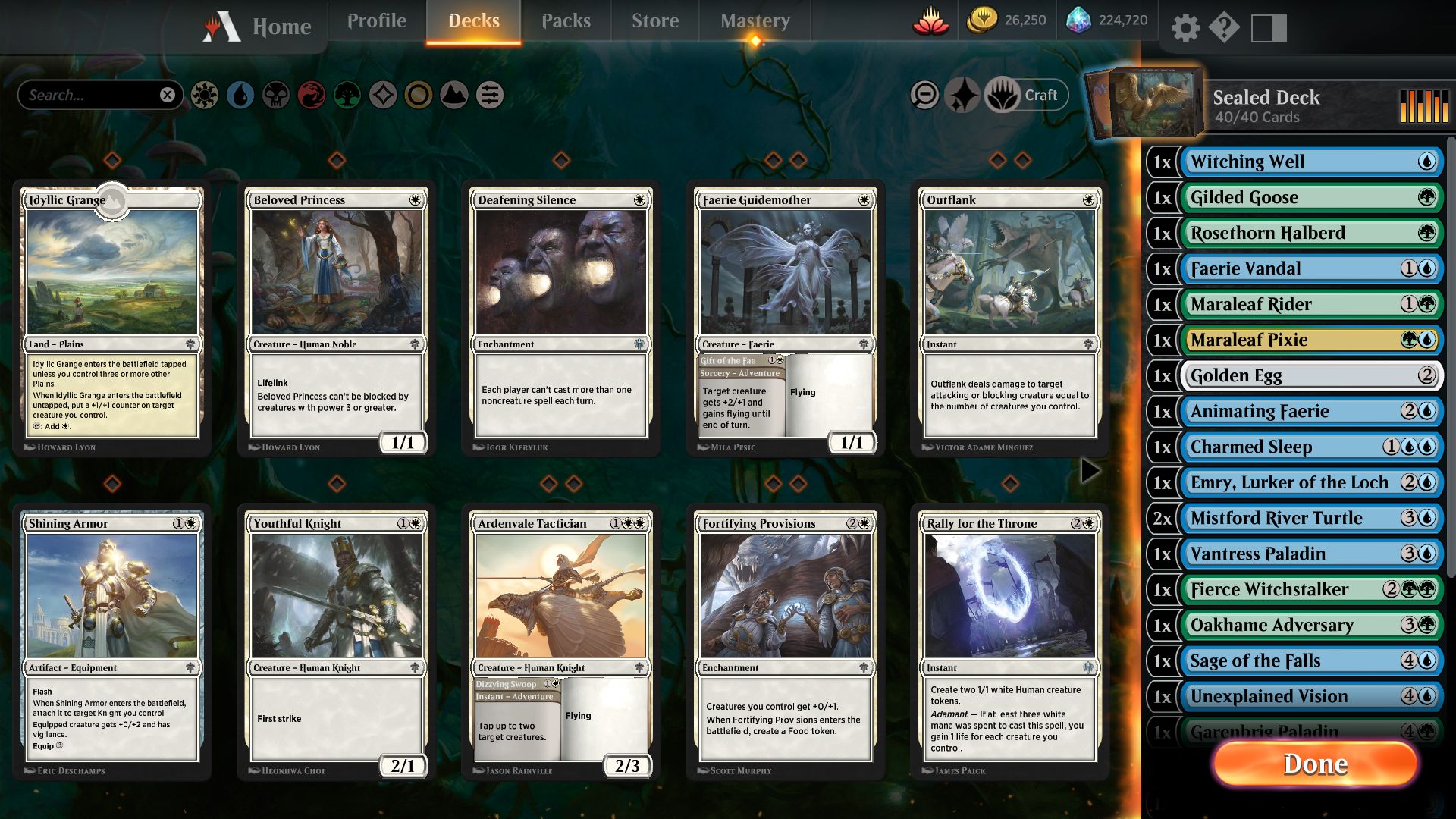 One deck I drafted had cards that gave me various uses for food tokens other than sacrificing it for life. This deck led to the most memorable match of the whole day: Me and my opponent desperately trying to manage our life totals against each other because we both had multiple copies of Tempting Witch, a card that basically turns food tokens into weapons.

Every Food that hit the table was potentially a projectile we could launch at each other, but we both had to figure out whether we thought we could win the food fight, or if it was better to use it to gain life, and hope to win by other means. If these kinds of games are common in Eldraine, then drafting this set should please obsessive puzzle solvers.

Eldraine also brings back a mechanical theme that’s near and dear to many Magic players whose hearts are as shrivelled and black as mine: Milling. Milling is magic slang for putting cards from your opponent’s deck directly into their graveyard; in Magic, if you would draw from an empty deck, you lose the game. This silly lateral strategy has often shown up at a low level in Magic sets, and I won’t boldly claim it’s a viable, strategically sound thing to do in Eldraine draft. But did I try to make a deck that stalled out the game and won by milling? Yeah, of course I did.

Now, keep in mind this is still all on Magic: The Gathering Arena. So rather than drafting in a pod of eight real players, I was passing packs around with virtual ones. This leads to altogether stronger and more focused decks, as Arena’s “draft bots” will resolutely not pick a powerful card that wouldn’t fit in the deck they’re drafting, instead passing it on to be grabbed by another player who can make use of it. 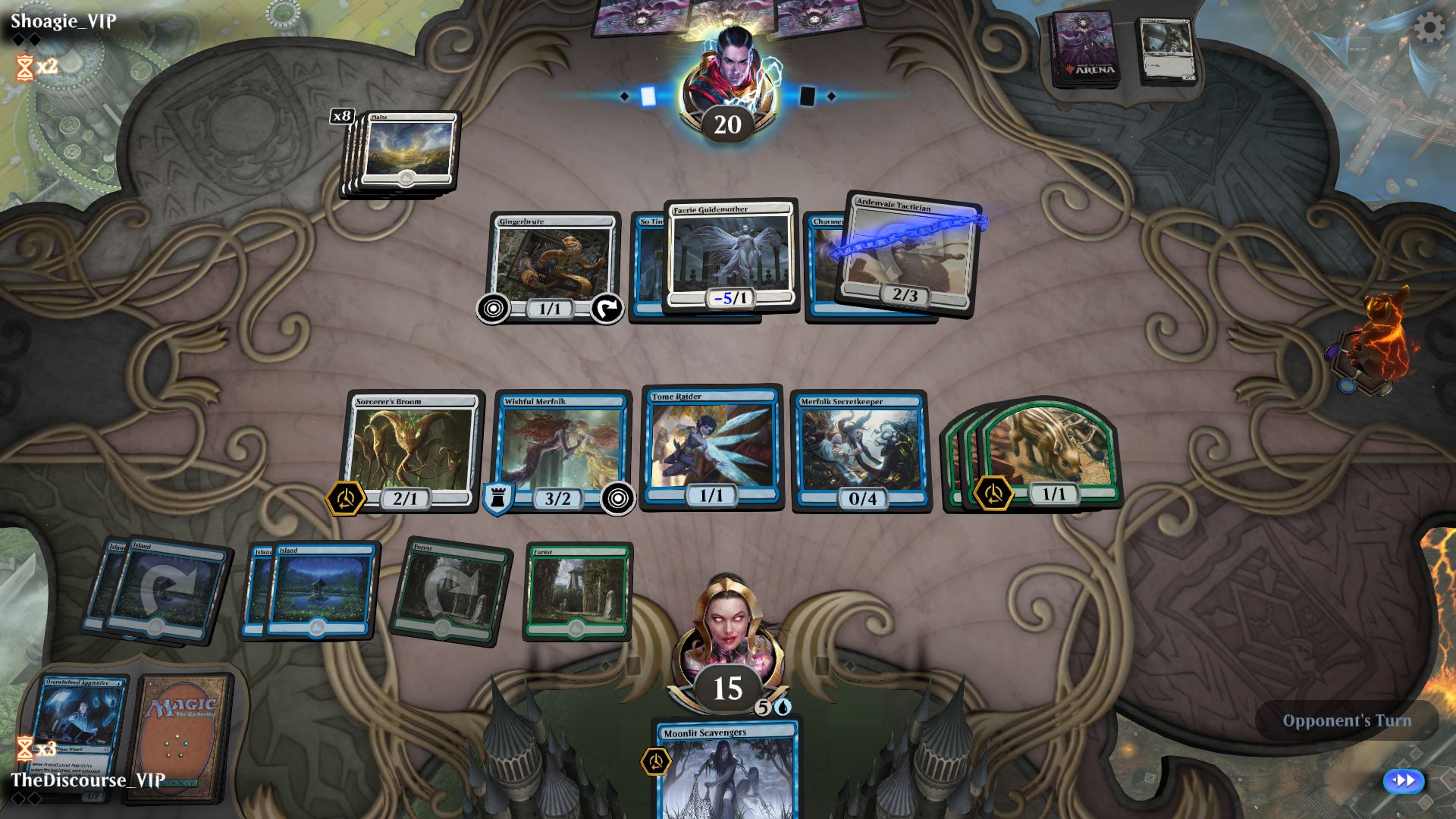 Many Magic players who are more used to the complex give and take of drafting with real humans find this unsatisfying, and it can easily lead to formats feeling stale or unbalanced, especially as you then go on to play against other humans who drafted completely separately from you in their own virtual cocoon. If a particular powerful strategy is undervalued by the bots, you can end up seeing a ton of it, and players end up with multiple copies of key common cards. This definitely hurt the enjoyment of drafting the previous set, Magic 2020, on Arena.

On the other hand, drafting on Arena is logistically convenient, as you don’t have to wrangle eight players, wait for them to make picks, or even draft your entire deck all in one go with limited time to make choices. And as it leads to smoother drafts and powerful decks, it’s also very good for showcasing the strategies buried inside the card set.

Of course, Magic sets get judged over the course of months and hundreds of matches played. I can’t speak to what Eldraine will be like to play on your 50th draft, or what Constructed formats will look like with Eldraine in them. First impressions can be deceiving, and I was playing in a fantastic environment, since everyone else was also trying to do weird nonsense, and nobody had any idea what was good. Caveats aside, I came away from Eldraine feeling delighted by the theme and intrigued by its systems. There’s both solid Magic fundamentals here, and odd little tangents to get lost in, and I can’t wait to take another bite of the poisoned apple.