Next week, on January 16, the latest card set will hit Magic: The Gathering Arena ahead of its physical release on January 24. It turns out that developers Wizards Of The Coast weren’t joking when they said their PC-based online game would stand right alongside the traditional game.

Theros Beyond Death is a new set in a series of four based on the Greek mythology-inspired plane of Theros. Gods, monsters and humans clash and heroes return from the Underworld in the continuation of a story which began back in 2013. But the important thing is the cards. A couple of months ago, I looked at how the previous set, Throne Of Eldraine, was designed, so I was interested to find out how this new one came together. I got to talk to design lead Mark Gottlieb about two of its new cards, Favoured of Iroas and Heroes of the Revel, which RPS can exclusively reveal below.

Like Throne Of Eldraine, a lot of Theros Beyond Death’s card design was ‘top-down’, which is to say that their mechanics follow from the story and setting. “But there was also a strong mechanical element to the set design,” says Gottlieb. “Theros has an enchantment-matters theme, Devotion is a returning ability, and we’re introducing a graveyard mechanic, escape, to express the focus on the Underworld.”

Escape allows you to take cards out of your graveyard in exchange for mana and exiling a number of other cards out of your graveyard (so you’ll need to have a stock of dead cards to work with). Devotion was introduced in the first Theros set, and it raises the potency of an effect depending on how many permanents of a specific colour that you have.

Along with a greater balance of enchantments and the re-introduction of another Theros ability, Constellation, Magic’s heady mix of soft story and setting with hard mechanics seems in full effect in Theros Beyond Death. 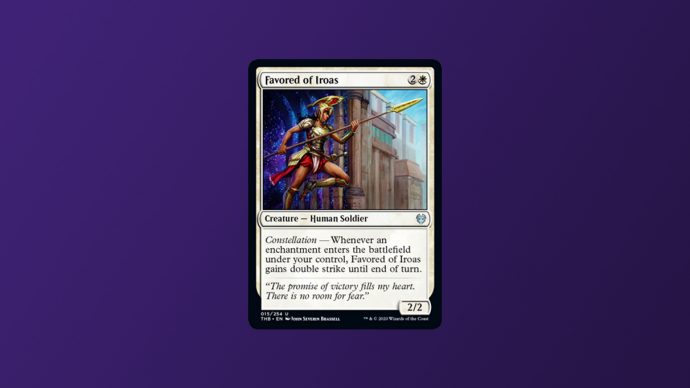 One of Theros Beyond Death’s mechanics is the Constellation ability, which makes a card’s effects trigger every time you play an enchantment. First introduced in the third Theros-based set, 2014’s Journey into Nyx, Constellation can be extremely powerful if you time it well.

Gottlieb tells me that enchantments are a big focus for Theros Beyond Death, giving Constellation a big role in its interplays between cards. “We wanted Constellation to be front and center, to reward players for playing enchantments,” he explains.

And yet Constellation had caused lots of problems in Journey Into Nyx, because all of the cards that had Constellation were themselves enchantments. “This led to some compounding effects, as each Constellation card would trigger all of your Constellation abilities,” says Gottlieb.

“It limited the design space, since each constellation card would trigger its own ability, we couldn’t use a constellation effect unless it made sense the turn that card entered the battlefield. For example, in Journey Into Nyx, we avoided printing a card with the ability ‘Constellation – Whenever [this creature] or another enchantment enters the battlefield under your control, [this creature] gains flying until end of turn.’”

So in Theros Beyond Death there are over a dozen cards with Constellation abilities, but they’re all creatures. “It let us make some different design choices.” So Favoured of Iroas gets Double Strike every time you play an enchantment, allowing it to attack twice, before and then during normal attacks. For three mana on a 2/2 creature, it’s a very strong early-game card if you’ve got enchantments in hand.

Heroes of the Revel 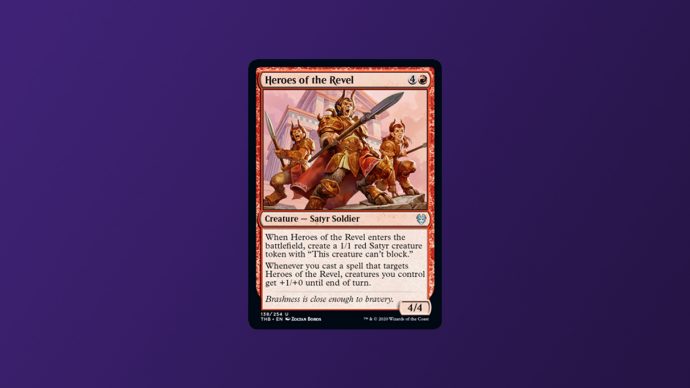 Satyrs have existed in Magic since before the Theros series, but it was in its Greece-like setting that they became a distinct tribe, focused on red and green to represent their roots in both the natural world and capricious revelry. ”The Satyrs are still hedonistic partygoers. They’re living their best life,” says Gottlieb.

Heroes of the Revel is a fairly expensive 4/4 creature in Theros Beyond Death which, when it enters the battlefield, creates a 1/1 Satyr creature that can’t block. Then, in support of the set’s general interest in rewarding you for using magic, if you target Heroes of the Revel with a spell, all your creatures get an extra attack point until the end of the turn.

Thematically, I guess, it’s like some absolute ledges turn up in your game with a legless bystander in tow, and if you give them a cheer, everyone gets extra punchy for a bit.

Fitting to their fickle nature, Gottlieb says there isn’t a cohesive strategy for Satyrs. But Theros Beyond Death does add to them an extra layer of use which Heroes of the Revel can play into.

“It contains Gallia of the Endless Dance, a legendary rare Satyr that boosts all your other Satyrs, so players who want to build a Satyr deck can do so,” he explains. “Satyr is also one of the more frequently created creature tokens in the set, so there will be some extra Satyrs crashing the party.”

Theros Beyond Death arrives in Arena on January 16th. For now, there's this fancy CG trailer: