Premature Evaluation is the weekly column in which we explore the wilds of early access. This week, Fraser’s setting off in a rickety boat in Make Sail. It looks a bit like Wind Waker, but you get to build your own vessel. Sadly, it doesn't talk.

Once a year, usually around the time of Gamescom, I slink off. I stop writing, disconnect from Twitter and flee to the coast of a sun-soaked country that I can comfortably sail around while sipping the cheapest gin and rum I can find. It’s what I look forward to most, every year, and when I return I’m always a more upbeat, raring-to-go kind of guy. It’s safe to say that I love sailing.

Make Sail has tested that love. 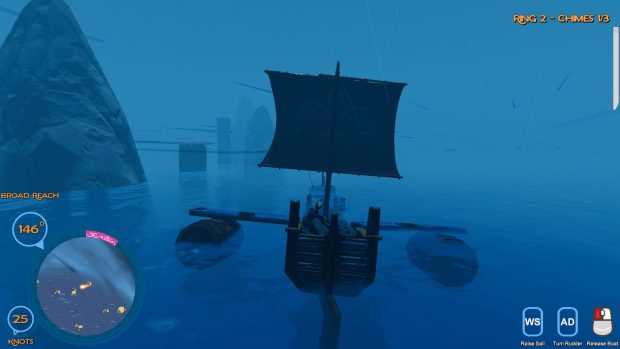 The oceans of Black Flag and Sea of Thieves are gorgeous, but no nautical adventure has ever looked as good as Wind Waker, so when I saw more than a hint of it in Make Sail’s screenshots, I had to dust off my sea legs and dive in. It loses some of that magic in motion. It’s not that Make Sail isn’t a striking game -- it is -- but exaggerated physics, jerky animation and performance problems make it harder to appreciate the fetching archipelago. It doesn’t do much for sailing or exploring the multitude of abandoned islands, either.

I can forgive a lot when the sailing is good. I never clicked with Sea of Thieves, but I still spent countless hours just sailing from island to island with my crew, simply enjoying the routine of manning the ship and gawking at the gorgeous vistas constantly being flung at our eyes. In Make Sail, I just felt a bit nauseous. The boat can’t even chill out in the main menu.

Because the sea is mostly calm, travelling across it isn’t quite as vomit inducing as it is in Stormworks: Build and Rescue, but the boat constantly bounces and twitches and careens, never really giving you an opportunity to simply sit back and enjoy the journey. The wind doesn’t help much, either.

It’s a supernatural wind that circles the central island in the archipelago. You’re essentially sailing through a cyclone. How you fight it depends on the type of sail you use. You start with a single square rig that can simply be raised and lowered; you can then add more sails, as well as a triangular sail, essentially a jib, which makes it easier to get through the wind. So while trying to sail against the wind with the square sail can be pretty tricky, you can do tacking manoeuvres with the jib, zig zagging your way to the objective. 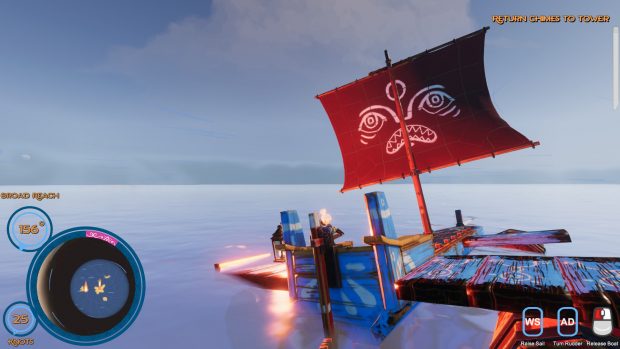 Unfortunately, whether you choose to battle the wind or let it carry you around in a circle until you get close to your destination, you’ll be in for a ponderous journey. I’d almost recommend the latter, however, because the combination of sensitive sails, sharp turns and wild physics makes tacking a lot of work for very little speed.

Maybe the default boats are just a bit rubbish, I thought to myself as I hit up the boat editor. I went in with dreams of craft that could cut through the sea, but I lost my cool before I could build anything seaworthy. Make Sail’s editor is cursed with a truly terrible camera and controls that are so colossally awful that I’d rather bounce my way across a dozen oceans before trying to slap together another boat. 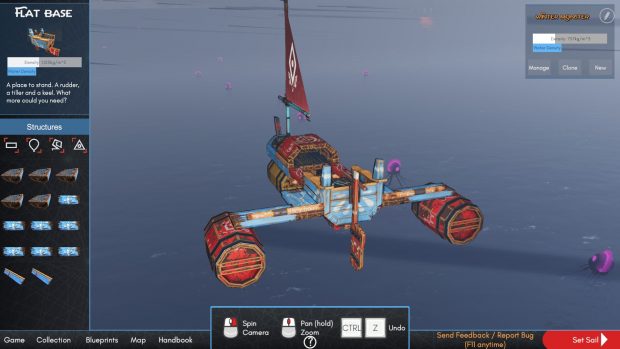 The simple act of connecting one component to another involves a great deal of trial and error. Each component has nodes that allow them to be attached to any other component, until, for no discernable reason, they don’t. It’s inconsistent, so you never know if pieces are going to snap together until you try. Even if you’ve done something a dozen times before, like connecting barrels to planks, the editor could suddenly become obstructive.

Here I am moments before I deleted the whole thing and admitted defeat.

It’s especially disappointing given the sort of vessels we’re meant to be able to make, if we wrestle with the editor for hours. I’d love to make some galleons and weird catamarans, but I love avoiding anguish a lot more. So I was stuck with the default boat, until I unlocked a brand new boat, sailing upon which was equally as nauseating. I hated those boats. I still hate them. I want to pin their pictures to a dartboard.

There’s nothing to Make Sail when you take out the editor. The whole impetus for fighting the wind and sailing to all these little islands is the hunt for new parts for your boat, along with chimes that expand the map, allowing you to explore even more islands and find even more parts. 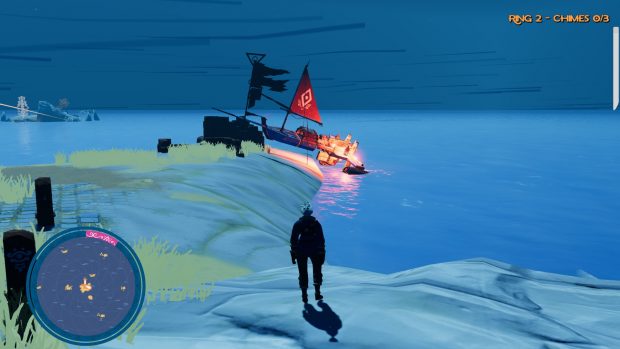 As my anger grew, my relationship with the boat deteriorated. Instead of awkward silence, I was making my feelings quite clear. “Boat arsehole,” I’d mutter when we set sail. It gave as good as it got. Sometimes it would just stop moving entirely, the sails remaining completely static not matter what I did. I realised it had gone too far when I stepped onto the boat after rummaging around on another deserted island and it just fell apart. There wasn’t anything for it to bump into; it fell apart because I stepped on it. It then proceeded to drift away. I managed to jump off before it took me far out, but I realised its intention: my boat was trying to kill me.

For my own safety, I’ll be staying on land for a while.