“More pirates!” I shouted at my matey, who we’ll call Andy because that’s his name. We’d both cleared our schedules so we could enjoy a leisurely cruise across Sea of Thieves’s striking azure ocean. This was our first sight of other players, and we were excited to get our instruments out and expand the size of our band. We jumped into the water to say hello. We were promptly shot.

Sea of Thieves is quite a lot of fun until you meet other pirates.

There’s a Pirate Code of Conduct stuck to the wall in every tavern in Sea of Thieves. It promotes community and fair play, and if these were rules rather than suggestions, the ocean would be a lovely place. Unfortunately pirates rarely follow suggestions. 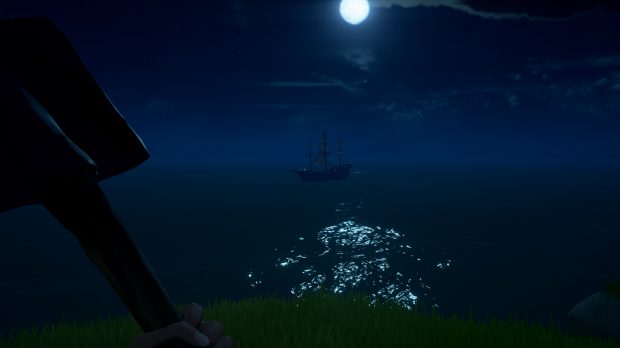 We were both a bit disappointed that our very first encounter ended in bloodshed, but we patiently waited for the ferryman to let us return to the land of the living, hoping that our next life would contain more friendship and fewer bullets in the skull. We respawned on our ship, where the other pirates were waiting for us. We died again. This happened several more times until we just waited them out on the ferry. Eventually they got bored, scuttled our ship and left.

This sums up just about every single encounter we had last night. We’d either be docked or on land, another ship would sidle up to us, murder us and then camp out on our ship until they got bored. We rarely had anything worth stealing, so ultimately it was just two groups of pirates, boring themselves for nothing.

That Sea of Thieves has PvP isn’t the problem. In a multiplayer game about pirates, PvP is almost a necessity, and ship-to-ship battles remain thrilling, but being murdered when you’re just reading your map, trying to talk to NPCs in an outpost or trying to set up a pirate band is just disheartening. 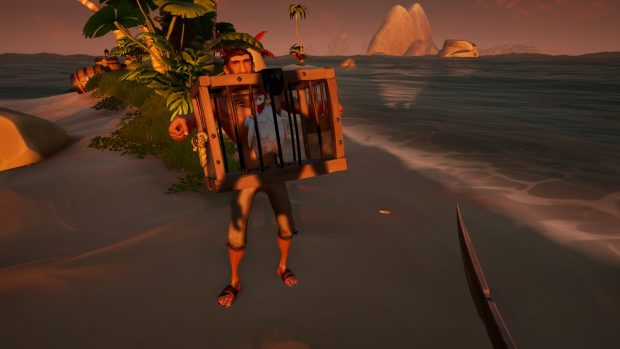 It goes against the spirit of the game. If you’re just hanging around doing some shopping, there’s no point in someone killing you. It’s not the same as ramming into another ship and then boarding it in the hopes of finding treasure, or at least some chickens. It even says, in the Pirate Code of Conduct, that fighting should take place at sea. But aside from a notice that most players probably won’t even read, there’s nothing stopping people from spending the whole day camping and stalking.

Sea of Thieves absolutely creates this situation. It’s easy to get peeved and start grumbling about people with no empathy for their fellow players, but when they’re playing a game that places absolutely no limits on how much you can hassle other pirates, then the blame lies at the devs’ feet.

The ridiculous respawn system is certainly not the fault of players. When you die, you’ll always reappear back on your ship once you leave the ferryman, which is rubbish no matter what side you're on. It’s ridiculous for the attackers because they’ve already won, so why should they have to fight me all over again? And it’s ridiculous for the defenders because it just means you keep reappearing right next to your murderer, who presumably already has their weapons at the ready. 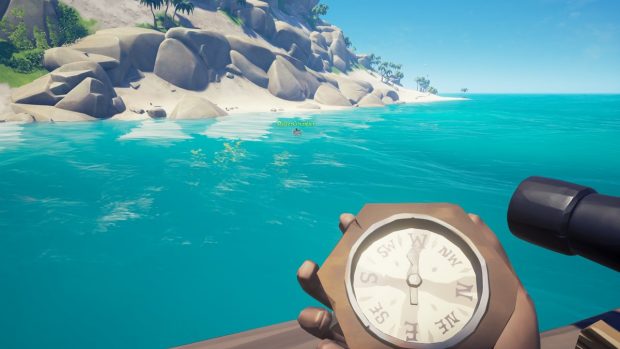 Half-way through the evening, Andy and I just started trying to avoid every ship we spotted. Even before we knew the crew was aggressive. I mean, of course they were. They always were. Admittedly this did create one of the most dramatic moments of the night.

We’d been running away from this galleon at least for an hour. And it kept finding us. No matter what we were doing, it would appear, and quickly we’d be dead. Our sloop was no match for it, and frankly they were just better, or at least more aggressive, players. Usually they didn’t even bother using their galleon’s might. They’d find us hanging out on the beach or digging up treasure.

There was a treasure chest we desperately needed to unearth, so we were waiting around the back of an island, cautiously peeking around the corner to see if the galleon had moved yet. The crew seemed to be busy, so we set sail, taking the longest way round, staying out of range. Unfortunately, that meant that we were heading right into a storm. There was a moment’s discussion about what we should do. 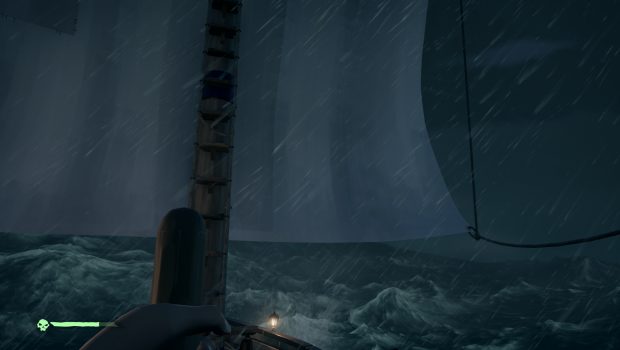 I really wanted to get into a proper ship battle, but since this crew had been hassling us for so long, I didn’t really want to put on a show for them. Into the storm, then. Andy took the wheel, and I moved around the ship, keeping busy. I worked the ropes, controlling our sails so we could get more speed; I grabbed my bucket, trying to empty the water that was filling our cargo hold; when a hole appeared in the hull, I quickly patched it up; and when Andy started to feel nauseous, I played a tune on my hurdy-gurdy.

It was intense. The sea and sky blended together, cloaking us in darkness as we were tossed around in every direction. The compass went wild, Andy lost control of the wheel and the ship lurched and creaked. Can ships scream? I’m pretty sure I heard it scream. More holes started to appear, and then lightning struck the cabin, ripping another chunk out of our ship. We’d entirely given up on trying to guide our struggling vessel. We had no idea where we were going. Into the rocks? There was a good chance. Then, all of a sudden, the sheet of rain became a drizzle and the ship started to settle. We’d survived.

Those are the kinds of stories I want to be able to tell, when I make it back to dry land. “I survived Poseidon’s wrath” is infinitely more exciting than “WeedKing420 shot me when I was eating a banana”. 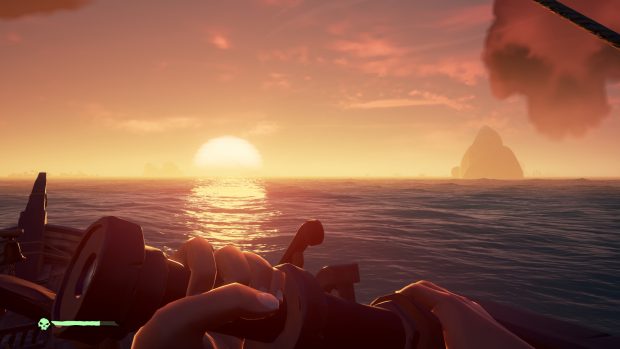 Maybe the problem is my expectations. The Sea of Thieves pitch is for a co-operative multiplayer pirate romp, but it looks like everyone I was playing with last night considers PvP the focus, turning it into a huge, tiresome deathmatch. I find that incredibly hard to parse with the game where I can chase chickens and pigs around a tiny island while my crew serenades me from the ship.

The whole experience has been somewhat off-putting. During a quiet moment, sailing through calm seas on our way to drop off some cargo, we gave voice to our doubts about the game and wondered if it might benefit from pacifist instances. I don’t think that would be a bad idea, but I do still want to get into the PvP. Its free-for-all nature is the issue, not that it exists at all.

I confess that I’ve been beaten. When I play again this evening, I will set aside my desire to make new pals and become yet another marauding pirate. Frankly, I need to blow off some steam.