Star Wars: Battlefront 2 is a game so nice, they used its name twice. Not to be confused with the DICE-developed (and still growing) Battlefield-esque shooter, the Pandemic-developed original incarnation is still considered the pinnacle of pick-up-and-play Star Wars fun by many. A messy team laser-fight with a slew of game modes for both solo or online play.

But with Pandemic's demise sinking fan's hopes for a sequel, it has fallen on the community to keep the game and its multiplayer servers afloat, and they have done so with aplomb. Here are the mods you'll need to jump into online play, and a few wilder picks, including Tron and Mass Effect-themed total conversions. 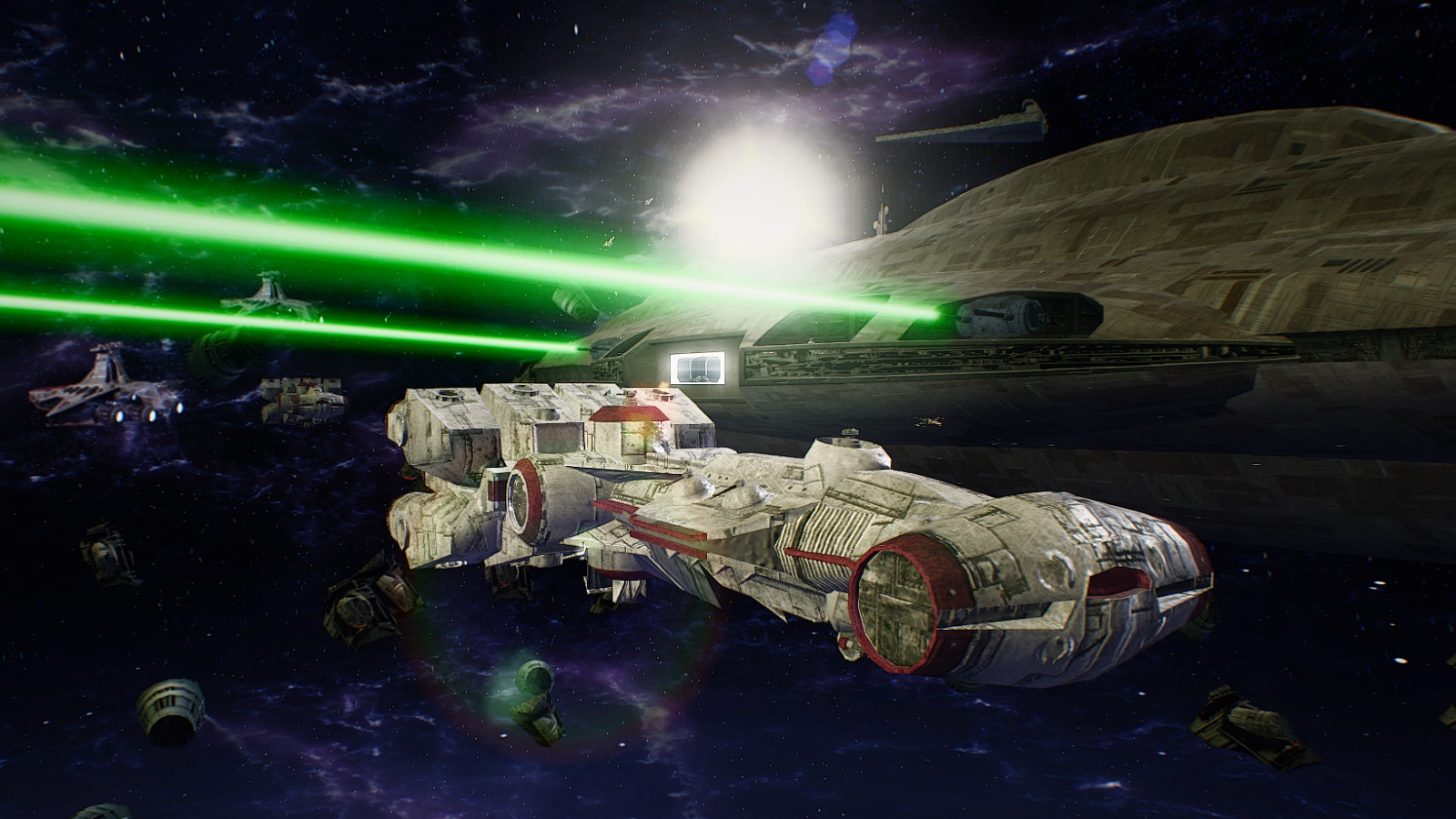 Whether or not you have the Steam version, it's probably best to grab the latest unofficial v1.30 patch, a community-made bundle of fixes that makes the game play nice with modern systems, and opens up support for more advanced mods. It also ensures multiplayer compatibility for all. There're always enough players to fill a server or two for a bit of Force-fueled fun. Installation is simple and automated - just point it towards wherever the game is installed. You can also (optionally) follow this guide to restore EAX audio effects like reverb to the game.

With the essentials out of the way, modding Battlefront 2 is a cakewalk. Just drop most mods into your Star Wars Battlefront II\GameData\addon directory and they'll automatically load simultaneously. This can look a little messy sometimes, with little control over what loading screens you get, but it's pretty good about not crossing the streams content-wise. New maps, factions and modes are all easily selected from the Instant Action panel.

There are a few exceptions to the rule, like the 1080p HUD mod by "Aurion". Battlefront 2 has aged very well for a fifteen year old game, but running at 1080p (or higher) on a modern monitor will just get you some very small text. Unzip, mash this into your Star Wars Battlefront II\GameData\data\_lvl_pc and overwrite the original file for a readability upgrade. Better still, this should be compatible with almost any mod you can throw at the game.

Whether you're new to the game or returning after a long hiatus, these are the mods you're looking for, if shiny graphics are your jam. Modder "Harrisonfog" has been hammering out dents and buffing off the rust on BF2's chassis for years now, and the results are impressive. Split into three parts — the HD Graphics Mod, Improved Sides and Realistic & Rezzed Maps — this mod takes a little more assembly than BF2 average (especially as you need to download each map separately), but it's worth the effort and is even compatible with online multiplayer.

The HD Graphics Mod, extracted to your Star Wars Battlefront II\GameData directory, is the smallest part, and basically a Reshade effects compilation enabling bloom and other modern fripperies. You'll want to disable whatever in-game anti aliasing you use for it to work best, but it works universally, no matter what mods you're running. The Improved Sides and Realistic Maps parts overwrite original map and character model files in Star Wars Battlefront II\GameData\data\_lvl_pc. All combined, you get a significantly nicer looking game -- though you won't be mistaking it for its more recent successor.

A brand new release, and probably the wildest, weirdest mod seen for Battlefront 2 yet, The Grid is a Tron-themed total conversion, featuring everything you'd expect from the setting. Throwing discs, chunky low-poly tanks, lightcycles that trail deadly walls and a cool synth soundtrack with a little Daft Punk for flavour. Technically, everything in this mod is crammed into a single map (a gloriously neon one further improved by the HD Remaster mod's post-processing), but modder "ForceMaster14" gets a lot of mileage out of the single environment.

As well as all the regular modes you expect, like Conquest and even a scripted Campaign level, you've got a racetrack, a horde survival mode, a comp-stomping Hunt mode, and more. The difference between the two playable factions—Program and Sentry— is largely cosmetic, but that's about the end of my complaints, because this feels like proof that Battlefront 2 still has a few years of modding left in it. Not too many games let you throw small armies of NPC troops up against each other.

In particular, Run/r mode proves that you can teach an old dog new tricks with enough time and effort. It's an arcade endless runner mini-game with semi-random levels. You hop left and right between platforms, hover to clear larger gaps, collect items for points and bash Grid Bugs with your disc.

Not that there's anything wrong with adding more Star Wars to a Star Wars game. Previously covered by Matt Cox, Battlefront 3 Legacy is a community-made attempt to revive Pandemic's canned third game in the series, albeit as a mod. It recently got another large-ish update, and you can see the fruits of the team's labours in the video above. Even if performance does chug a little at times, it's hard not to be impressed as the battle segues seamlessly from ground combat to an enormous aerial battle. You can already feel them pushing up against the limits of Battlefront 2's fifteen-year-old code, but it seems modern PCs can just power through it.

Half the really good Star Wars stuff lies outside of Disney's refreshed canon. Who can forget Knights Of The Old Republic, Bioware's elegant RPG from a more civilised age -- an age before studios banked so much on the looter-shooter boom! Notable for its swooshy aesthetic (a technical term), everyone in KOTOR had either super-sleek armour or long flowing cloaks, and they're all looking lovely here. Right now this mod by "Naielis" only has a single map, but there are plans to implement as much of the extended universe as possible. For the time being, you can stomp around the surface of Malachor V as the masked and moody Darth Revan, with a swarm of expendable minions in tow. That's got to be worth something.

Speaking of Bioware, Mass Effect's Biotic powers are just Jedi Force magic in more serious sci-fi pajamas, so it stands to reason that Mass Effect and Battlefront 2 would be a good match. Modding crew Frayed Wire Studios clearly agree, as Mass Effect: Unification, an ambitious near-total conversion mod, feels like a natural fit. From replicating the Mass Effect HUD to porting over all the music and effects that defined the setting, this feels right. It's a joy to wade into a pitched laser battle, free of Mass Effect's smaller squad focus.

Unification lets you play as three (and a half) factions lifted from Bioware's shooty RPG series, which you can lock down via an external configuration tool. You can play as the Systems Alliance (humans with the occasional hero), the Collectors (body-snatching space cockroaches) and the Geth (sentient robots) in both Evolved and evil 'Heretic' variants. The humans get the most interesting heroes, though, including Commander Shepherd and the always-aggro Jack.

As impressive as ME: Unification is, it could use a few more maps. Enter Frayed Wire's Sol Map Pack (and this essential patch), adding a bundle of new environments set around our own solar system. Fight in low gravity on the moon, around Martian wind farms, or inside a Venusian research base -- and other semi-plausible future battlefields. While you can play as Star Wars factions on these maps, they're also designed to be Unification compatible too. Collectors? On our moon? It's likelier than you think. 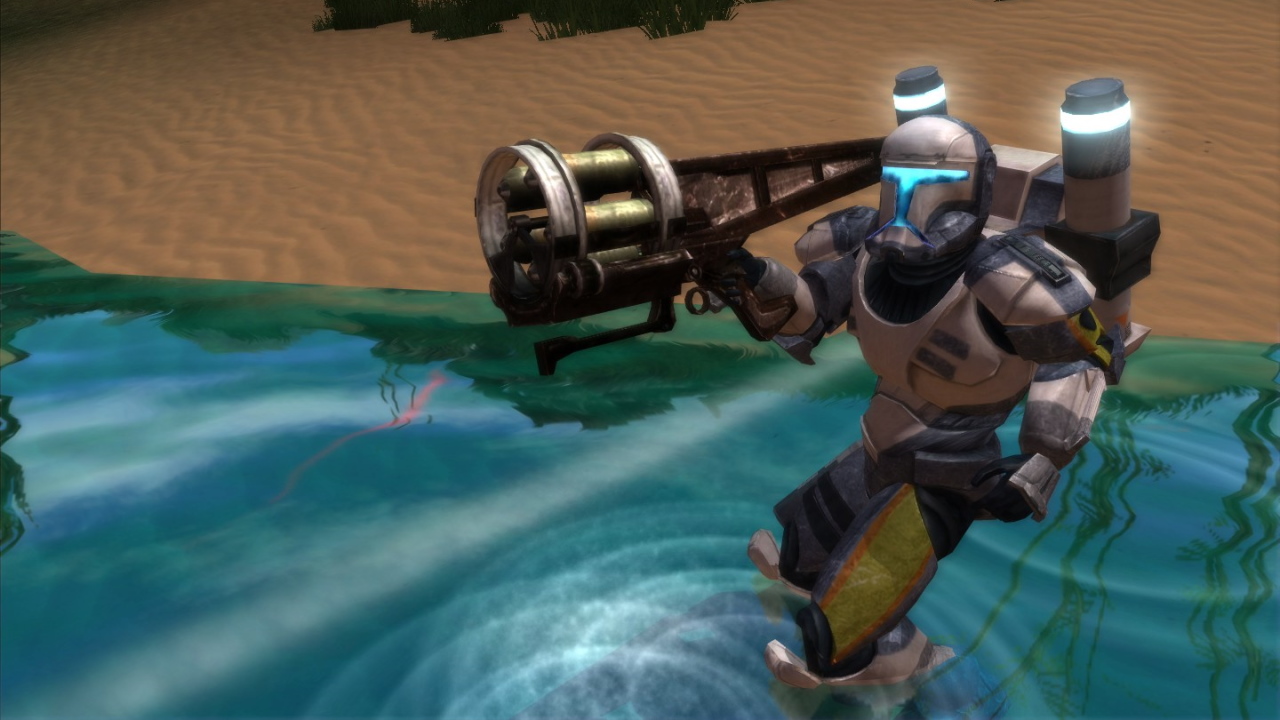 While Unification hasn't been updated in the past year, Frayed Wires are still alive and kicking, and have their eyes firmly set on the Clone Wars era. The recently released Battlefront: The Clone Wars aims to capture the look and sound of the Clone Wars TV series, while the Republic Commando mod (still unreleased) is a handsome looking production inspired by the still-excellent Lucasarts-made shooter. Battlefront 2 might have launched a long time ago, but that galaxy doesn't seem so far away, even after all that time.

All of the mods featured here have either been launched or updated in the past year, and most in the past month or two - the sign of a healthy, happy mod scene. You can find plenty more released or in development over on Mod DB. These are just the ones that tickled my fancy; what ones do you swear by, and are eager to drag your multiplayer crew into?