Capcom are laying a common grumble about Monster Hunter: World on PC to rest in a couple weeks, with the release of an optional HD texture pack. While the PC version of the game is the smoothest, nicest-looking way to play the enormous boss rush, eagle-eyed folks noticed that many textures in the PC release were slightly fuzzier up close than their console equivalents. Not a huge difference, but it was still visible. Capcom smoothed out some of this in last October's update for the game, but will soon offer players with extra space and VRAM the option to crank everything up further.

According to Capcom's announcement, the April 4th update will offer the high res textures as free DLC. The system requirements are a GPU with 8GB of VRAM, and "40GB of free space". Whether that means the DLC weighs in at 40GB or if that'll be the final size of the game when it's installed (MH:W is currently 21GB) is unknown. The update will also include a new TAA+FXAA anti-aliasing option and a couple minor quality-of-life improvements, but otherwise sounds like a fairly minor update. I'm curious to see what this does to the game's overall performance, too. 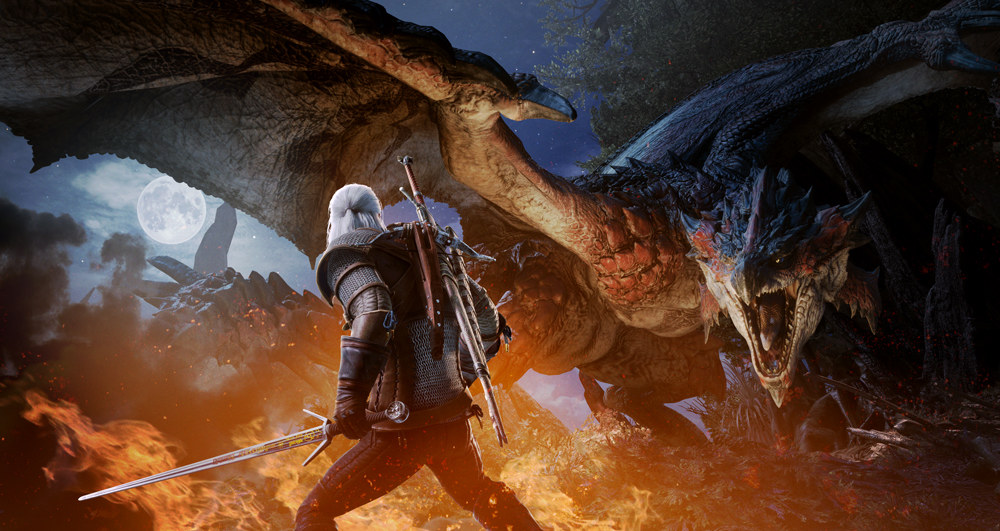 The graphics update will be followed on April 5th by a new event quest - an Arch-tempered version of endgame dragon Xeno'jiiva is on the way. You'll need to be Hunter Rank 50 to take the new quest, and repeatedly blatting the even shinier crystal dragon (now with metallic highlights) will earn you two new sets of top tier armour. Still, this is just a gentle warm-up for the upcoming Iceborne expansion, which looks to be re-introducing G-Rank hunts to the game: New Game Plus styled remixed fights against tougher, faster, meaner versions of old creatures with new attacks.

Frustratingly, there's still no date for the Witcher crossover on PC. It's already out on consoles, and features Geralt, playable, hunting a forest demon from his world plus the option to permanently unlock him and Ciri as full character skins with their own perks and special weapons. The HD texture update launches on April 4th. Arch-tempered Xeno'jiiva lands April 5th and leaves April 18th.

For newcomers enticed by the updated visuals, Dave's guide to Monster Hunter's basics would be a good first stop.