“The plural of ‘monster’ is ‘monst’.”
Nietzsche, probably.

Welcome hunter. If you’ve already got a decent idea of what the hunting of monst is all about, and you’re just here to make sure the rescue from the darkest recesses of console exclusivity went smoothly, you’ll want to head over to Katharine’s rundowns. For the record, my own experience has been largely positive since the latest patch went live. A couple of brief hiccups when things got hectic, but nothing major. Frequently I found myself admiring the frames and going “mmmm, yes. This is a good amount of frames”. If you want more frames, you can always turn off Volume Rendering Quality in the menu, which gets rid of the game’s fog effects and improves performance a lot. It is a very nice fog though.

Right, now the nerds have left, let's talk about cats! If you’re on the fence about Monster Hunter: World, the Palico companions are a good litmus test. They protec. They attac. They increase your survivability by sporadically using healing wasp sac. They’re also all over the marketing material, so you probably know whether or not you find them cloying already. If not, and your first thought upon seeing one was “I can’t wait to murder a big pink fluffy bat so I can make this lad a smol pink fluffy hat”, then you’re probably on board for what the game’s got in its magic bag. The bag, by the way, is part of a fresh and sporty athleisure spring/summer collection made from a dragon’s arsehole. 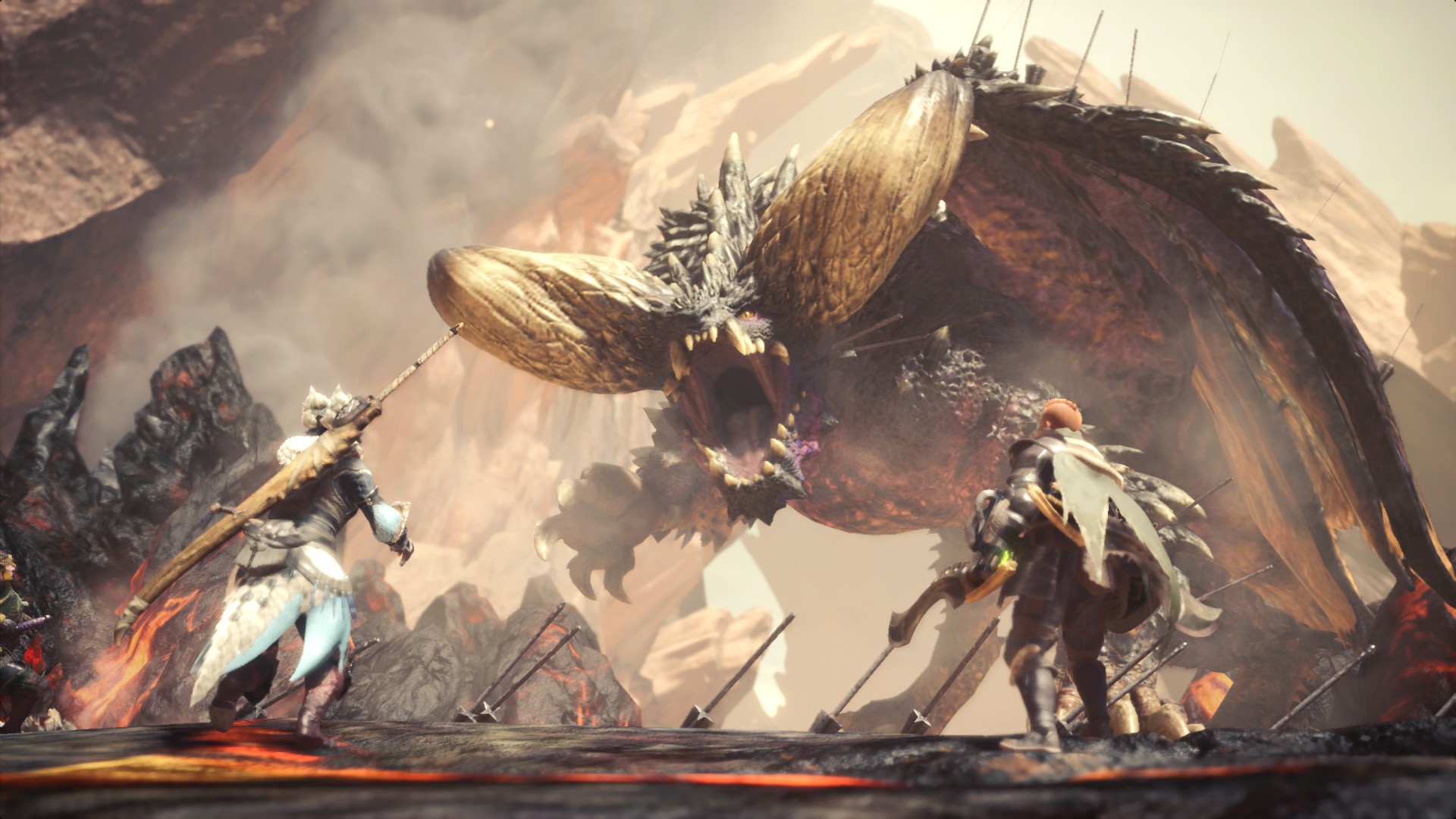 Dragon’s arseholes, as it happens, are by and large the crux of the Monster Hunter experience. From a hub stuffed with item shops, blacksmiths, and stat boosting restaurants, you and up to three friends take on quests to hunt down a staggering variety of scaly, spiky, or slippery wildlife. In huge, beautiful environments, you track down footprints by following luminous green scout flies across the map to your quarry. Part boss fight and part set piece, battles are tense and drawn out, equal parts exhilarating and exhausting. On victory, you collect monst parts, return to the hub, build new and exciting gear, and repeat the process.

Want to know more?If you're looking for help with the game, check out our comprehensive Monster Hunter World guide for tips on getting started, cooking, capturing, and how to beat particular monsters.

It helps that you’ll be making and fighting with some of gaming’s more interesting weapons. Take the Insect Glaive — a double bladed staff that allows its wielder to launch into the air at will. All hunters have opportunities to mount monst in the hope of weakening them enough to bring them crashing down, stunned and ripe for a pummeling, but Insect Glaive users excel at it. A few button taps have you vaulting aerial cartwheels of spiky revenge, creating your own openings while your less mobile teammates shake their fists in impotent fury from the stupid, boring ground. Also, the glaive is home to an element-infused beetle called a Kinsect that you can launch at things to gain combat bonuses. And, uh, there’s about eighteen different Kinsects, each with their own upgrade path. Plus, there are three different Insect Glaive trees, each with about five types, which all have their own upgrade path. Did I mention that the Insect Glaive is one of fourteen weapons, almost every single one of which completely change the way you play the game? Monster Hunter: World, you are ridiculous. Also, never change. 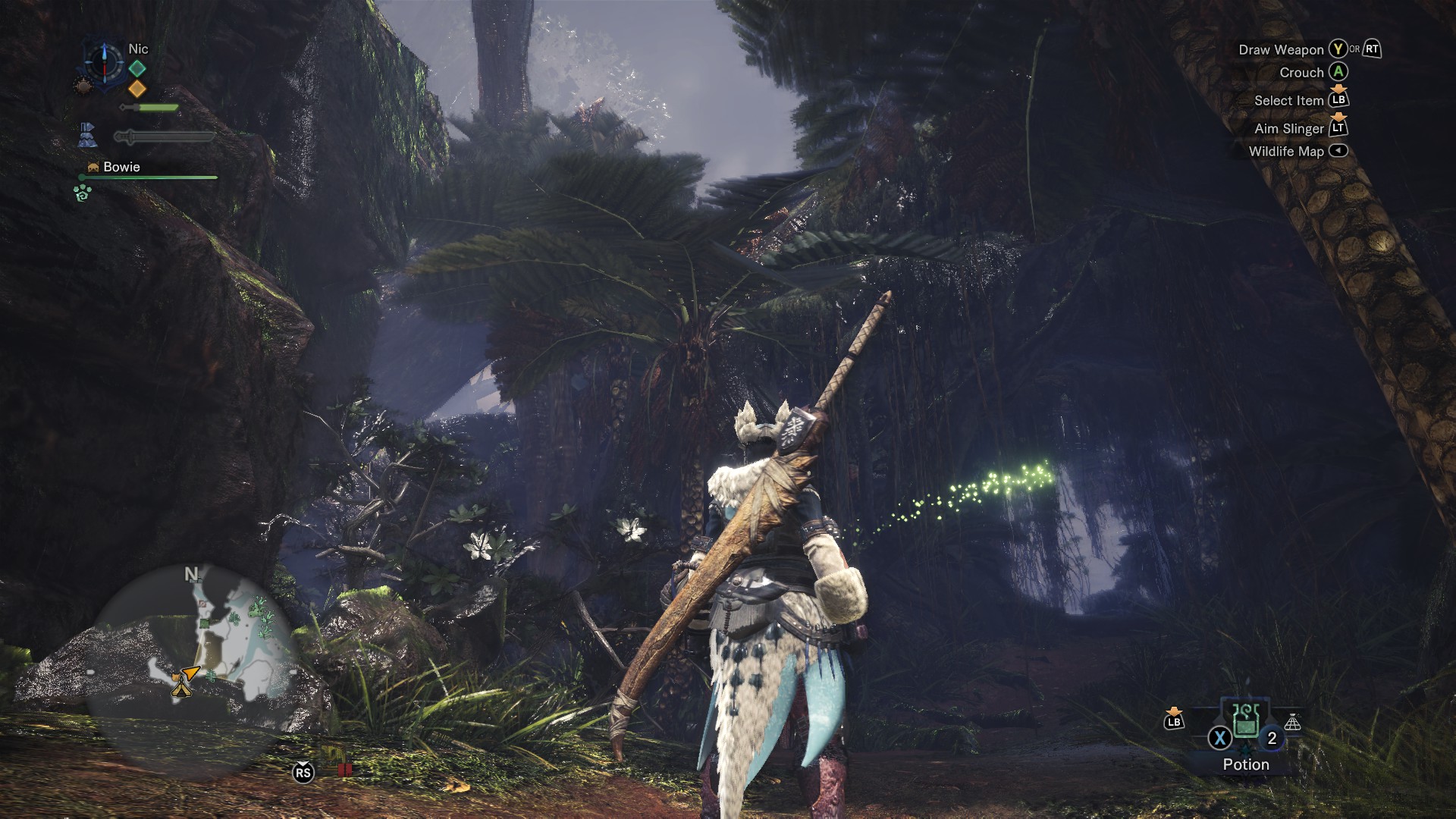 Not that they’re all winners. Guns and bows allow you to stay out of danger while dealing steady, reliable damage, but stepping outside the fray also means skipping out on the flow that makes these fight so enjoyable. With close-range weapons, fights become fluid, tense exchanges, at times evoking duel-like intimacy despite your opponent’s gargantuan size. Reactive dodges with a touch of invincibility frame leeway make for sharp evasions, and the sheer weight behind attacks leaves clear openings to weave your way in, poke your quarry in the nostril a few times, then retreat to safety.

At first though, combat feels extremely clunky, especially with the heavier weapons. My entry to the series was picking up my copy of World when it first launched on consoles, and as someone far more used to Devil May Cry and Bloodborne, I had some adjusting to do. Combat is furious at times, but there’s no animation cancelling. Once you’ve committed to an attack or combo, your character will follow through, even if this means getting eaten in the process. A slightly fiddly lock-on plants a big, ugly red target on your opponent, but attacking won’t automatically orientate your character in the reticle’s direction, or close the distance between you. There’s some great tutorials about on how to customise this if you’re not feeling it, but if you stick it out, this initial awkwardness ends up lending fights a real sense of weight and momentum. The result is a genuinely excellent system that rewards patience and situational awareness, but still makes you feel agile and powerful. Agile and powerful, I repeat to myself, as I maneuver through the dense undergrowth with one hand while using the other to cram an onion bhaji into my face hole. 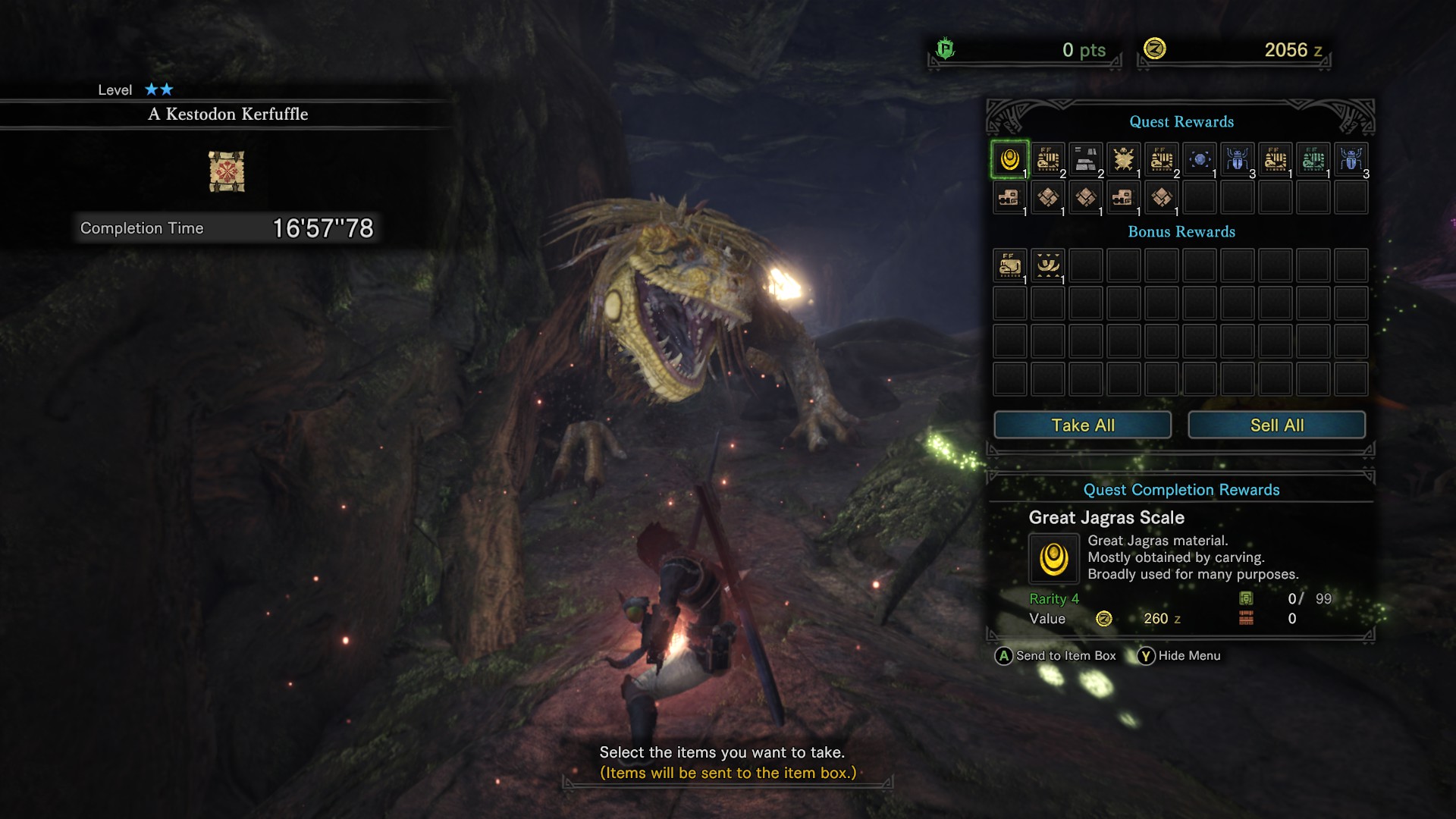 If the combat itself is at first unintuitive, the sheer number of esoteric statistics surrounding it are, at times, overwhelming. There’s a reason entire fan communities exist just to help new players understand the game, after all. One advantage of having had to wait a few months for the port is that the wikis and guides are now full to bursting with information. The depth of build customization you’d expect from an action RPG of this size is certainly present, but it’s honestly just as viable for the first dozen hours or so to just to grab a weapon you like the look of and start wailing away on the nearest lizard. Optional but unobtrusive prompts at the top right of the screen guide you through both basic attacks and combos. Optional floating damage is colour coded to signal effectiveness. Like a carnivorous plant, Monster Hunter is colourful and inviting, luring you in with seamless tutorials and accommodating explanations, and then chewing up your free time without mercy.

Free time, by the way, is something you’re going to need a lot of. World is a game of two halves. The first being a 40-70 hour action RPG with a linear story, the second a forty billion hour lifestyle game in the vein of a Warframe or Destiny. There’s currently around 30 monst for you, the hunter of monst, to hunt. Several of these have been added since launch for free, and it’s going to take you a while to get through all of them, but you are going to end up hunting the same monst many, many times. Equipment variety, online play, and Capcom’s so far excellent efforts to support the game go a long way, but even though I’m hesitant to use the word grinding for combat this satisfying and varied, repetition is something you’re going to have to get used to. 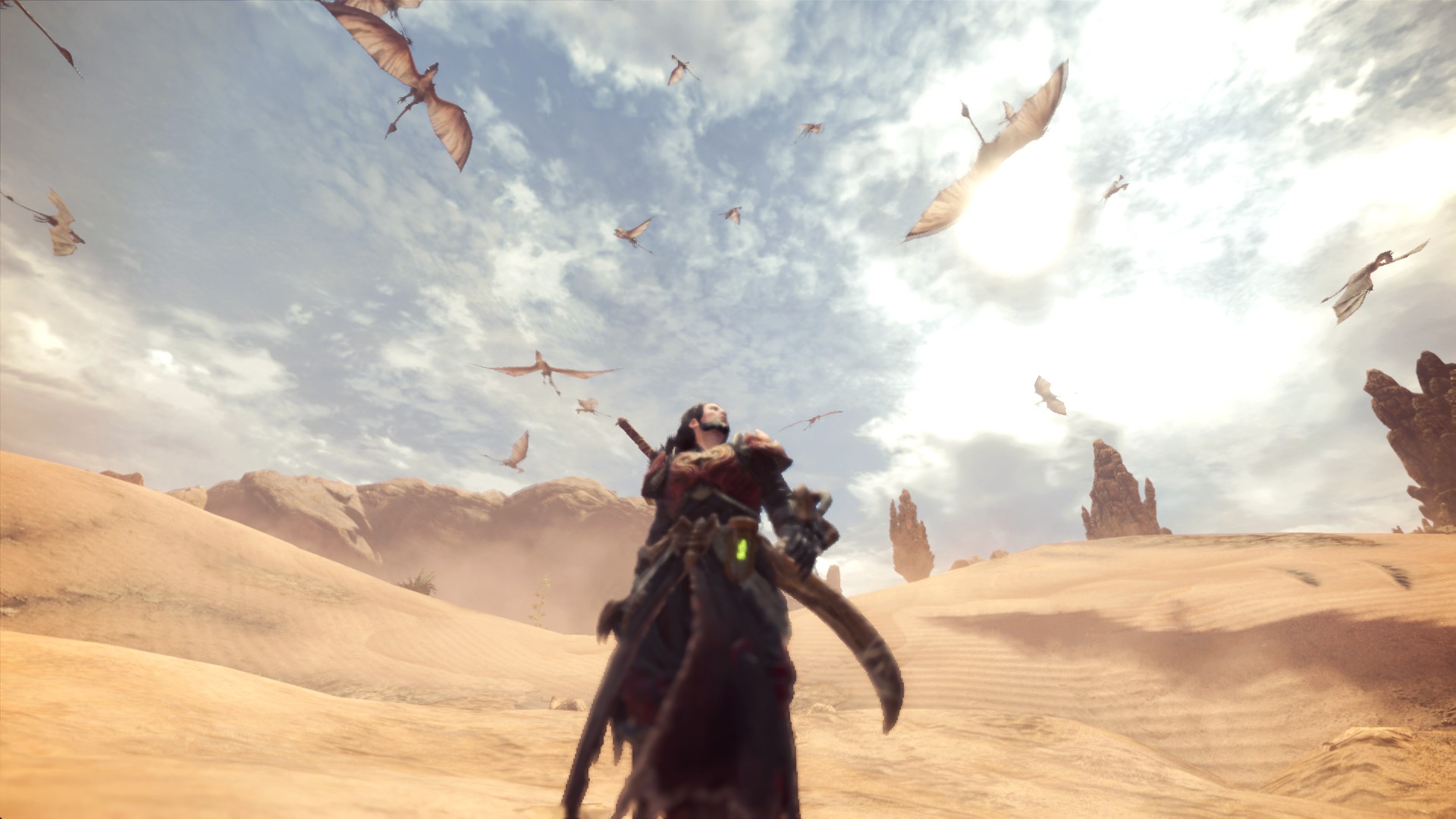 But even these repeated fights come to life through the details. The long eared hares and luminous jellyfish that hop and float around forest floors and crystal caves that you can catch and keep as pets. The jubilant dance between two Palicos when they meet, or the tiny inflatable yellow rafts that they use to cross water. The vine patches, electric toads, and poison flowers that clever hunters can take advantage of. The awe-inspiring turf wars that break out when two large monst chance upon each other in the wild. This is a world that gives both whimsy and ferocity equal standing in its tangled, breathing ecosystems.

And it’s that same breath that animates so much of Monster Hunter: World. When an iguana-like Great Jagras swallows its prey whole, it chokes back the creature in huge, violent gulps, its grey belly shuddering as it expands. Fearsome Anjanath’s disturb the air around you with battle roars when you first intrude on their territory. Azure butterflies dart around pink coral outcrops, bats swoop down from crystalline stalactites, and every footstep disturbs some new chittering oddity or efervescent phenomena. Monster Hunter approaches the fantastical with both expertise and reverence for the real that inspires it, relaying its world in hushed, excitable whispers, like an Anime narrated by David Attenborough. 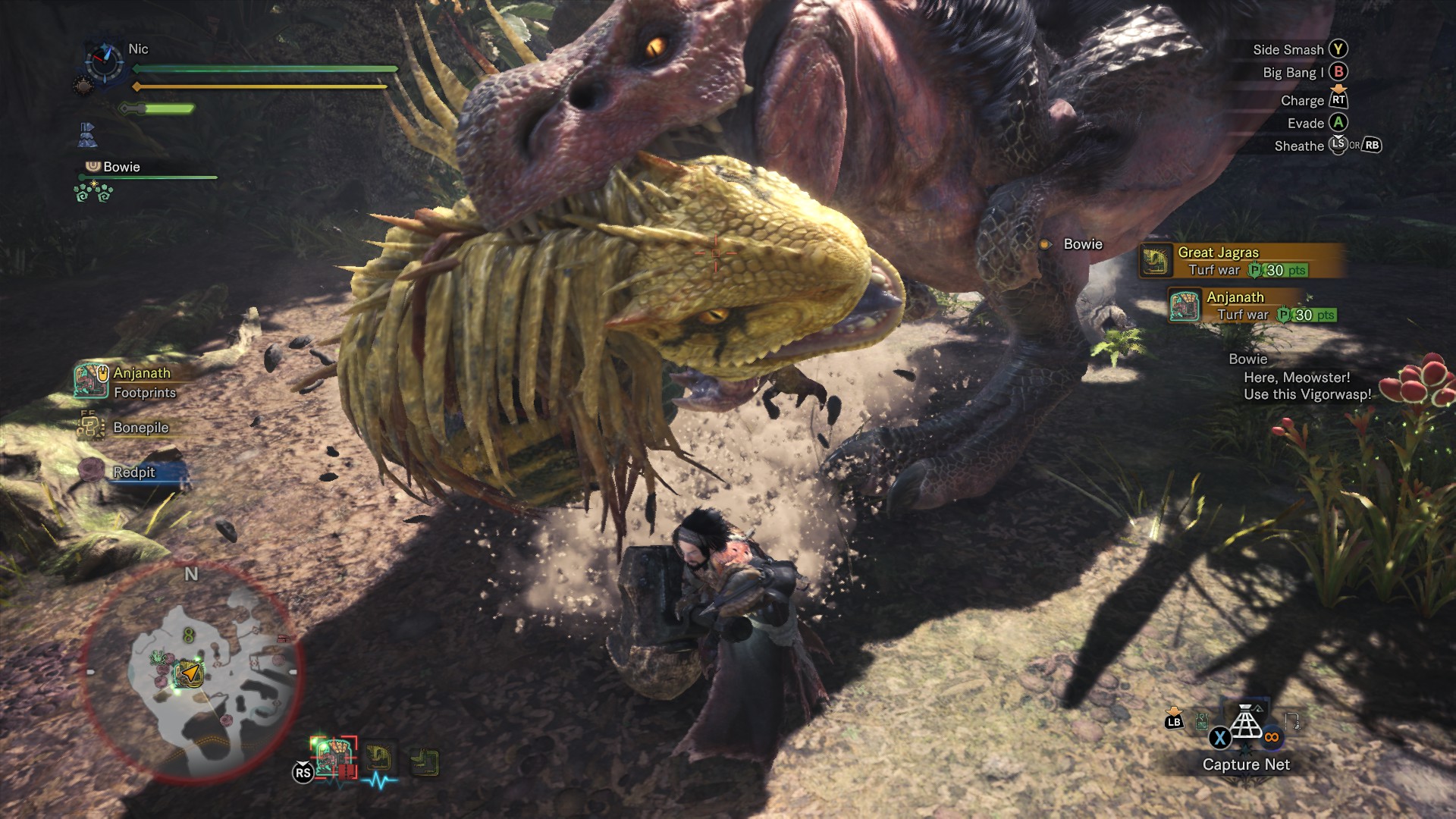 The thing about Attenborough though — and, I’d guess, a fairly large factor in the public’s continued admiration for him — is that after documenting nature’s many breathtaking vistas and charming idiosyncrasies, he generally refrains from hitting everything in sight with a massive fucking hammer made from the skulls of his enemies. That’s the paradox at the heart of Monster Hunter. It’s a game that clearly adores nature, that loves its scope and playful touch and sparkling oddness. And yet still delights in its destruction at any opportunity.

“The New World” is what you’ll often hear characters refer to these strange and enchanting lands as. Lip service is paid to “ecological marvels”. As a player, your options for interaction are limited to murder and colonisation. New flora matter only as long as they can be turned into some stat boosting potion. New fauna are only of interest if they can fit on the menu. You might delight at a gathering of playful, deer-like Kelbi one mission, only to be instructed to carve them up for an armour upgrade a few hours later. It’s an odd way to present a relationship with something the game so clearly cherishes. For me, it meant that I could never quite take the game’s story or characters seriously. There’s a palpable dissonance behind all the kawaii whimsy and melodramatic nobility, but it’s never addressed, or even recognised.

Monster Hunter World is gorgeous and exciting. Its elegant systems are packed with depth. It’s hugely generous with a frankly bewildering amount of content, but still provides a firm, focused gameplay loop. The online experience is balanced, seamless, and challenging. But Monster Hunter World is also an unintentional reminder that the the glorious myth of dragon hunting only works as a shadow puppet show. Once you’ve seen that dragon’s home, its patterned scales, the beauty and terror in its wingspan, and watched it limp defeated back to its nest, swinging the blade a final time feels a lot less heroic. He who hunts monst, and all that. Cute cats though.