Last night, MSI published a news post on their website detailing which of their gaming monitors had been "effectively" deemed G-Sync Compatible monitors after running some of their own internal tests on them. This morning, that post has mysteriously vanished, suggesting something might be amiss with either the wording of the post or the list of monitors themselves. I've reached out to MSI for clarification on this, but in the mean time, let's take a look at the post itself, which was luckily still open on my phone browser when I came to look at it this morning - although how much stock we should put into this list now it's been pulled is up for debate.

I imagine the post's mysterious disappearance is because MSI are claiming these monitors are capital-C "G-Sync Compatible" - an official, Nvidia-certified standard - as opposed to merely G-Sync compatible with a small-c, which is now technically true of every adaptive sync / AMD FreeSync monitor thanks to Nvidia's recent driver update. It's just that small-c compatible screens may not offer as good a G-Sync experience as capital-C Compatible screens that have gone through Nvidia's own rigorous testing procedures.

G-Sync, in case you've forgotten, is Nvidia's adaptive refresh rate technology that helps to eliminate stutter and screen tearing as well as a bunch of other things when you're playing games with an Nvidia graphics card and Nvidia G-Sync-branded gaming monitor. At CES at the beginning of January, however, Nvidia announced that they were going to start opening up their previously very strict standard so that gamers with Nvidia graphics cards and cheaper, adaptive sync screens (i.e: AMD FreeSync monitors) could still get a G-Sync-like experience after a small driver update.

However, you may recall that none of MSI's adaptive sync / FreeSync monitors have actually passed Nvidia's strict G-Sync Compatible testing process yet, so you can see why MSI's opening claim about how "Following Nvidia's announcement of their newest drivers, MSI monitors are effectively G-Sync Compatible!" might raise a few eyebrows.

Here are their highly scientific results so far: 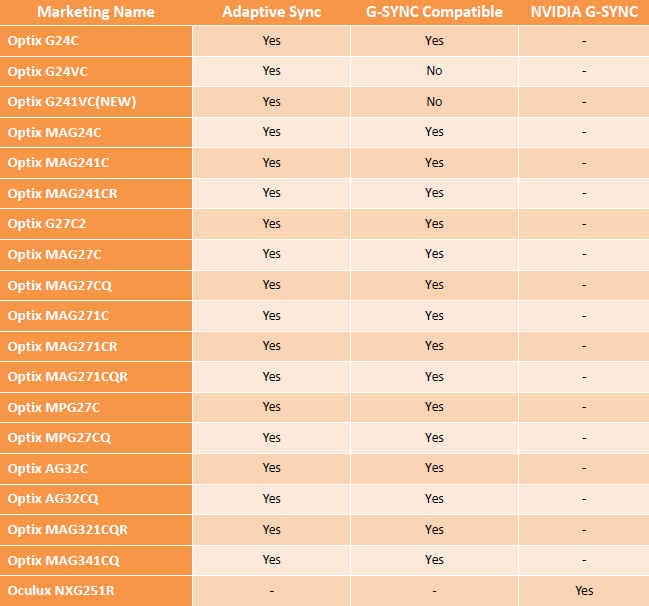 To be clear, I'm not saying MSI's list is a load of hogwash. Indeed, there may well be some truth in the matter, as it's perfectly possible they provided a perfectly decent G-Sync-like experience when the driver update was applied. After all, Alec tried switching on G-Sync on his old LG FreeSync monitor when the driver came out the other week and had a grand old time with it despite the monitor not being one of Nvidia's chosen 12.

However, but I'd imagine they're all small-c G-Sync compatible monitors as opposed to proper, Nvidia-sanctioned capital-C G-Sync Compatible monitors. MSI were yet to respond to my question by the time of publication, but I'll update this story with anything they have to say as soon as they get in touch.