I couldn’t tell you exactly why the truck in front of us has started dropping explosive red barrels out of its container doors, but I am now keenly aware of the fragility of my own speedy car, which is giving chase behind. The oil drums explode and leave firey trails all across the motorway. Innocent drivers swerve and crash to avoid the flames. Then the goons show up. They have taken the form of large black muscle cars. In Need For Speed Payback [official site] everything is a little crazy.

That should signal, as clearly as the exploding barrels, what Ghost Games are going for with this sequel. As has come to be expected with Need For Speed, this is arcade racing, far from the down-a-gear-up-a-gear sensibilities of Forza and the like. Like Burnout Paradise and Need For Speed: Most Wanted before it, they’ve built an open world to cruise around in, picking up missions as you go. There are drag races, off-road races, drifting challenges, collectibles and everything else you can probably already guess. But the focus in Payback, according to Ho, is very much on the pre-set “missions” like the one I’ve been playing, and the surrounding story, a tale of revenge against a criminal cartel called “the House”.

Missions follow the story. For example, says Ho, you might be employed as the driver for a bank heist, or tasked with driving a VIP to safety. On top of that there are certain “blockbuster” missions which will bring together the three main protagonists of the story (a boy racer called Tyler, a stunt fella called Mac, and a wheelwoman called Jess). In these the player will swap between characters at key moments for added vehicular lunacy. It’s a scripted process, unlike the car-hopping powers of Driver: San Francisco or the murderer-swapping of GTAV.

This is exactly what happens during my playthrough. After dispatching the muscle motors by bashing into them in a classic Burnout fashion, I’m instructed by the chattering of the characters to get alongside the truck. The treasure we’re after is inside. Then a video cuts into the action - Jess, the wheelwoman, clambers out of my passenger seat window and leaps to the truck, which starts to swivel and catch aflame. She shimmies her way inside and the truck starts to falter. It’s going to explode.

Then, a car bursts forth from the truck’s innards like a wheeled xenomorph. It’s a sequence that makes me laugh out loud. It’s not the laugh brought on by a clear comedy moment. It’s that strong bark of laughter you can’t help when you watch an action movie that’s so over the top it could be in no man’s land. This is where the game finally grants me control back. The camera swishes around and I am suddenly controlling Jess as she speeds away into the sunset with her new stolen supercar (or “hypercar” to use the game’s parlance). Then, as Need for Speed is wont to do, the cops show up (“people love cop chases,” says Ho to me later). Naturally, that’s where the demo cuts off. 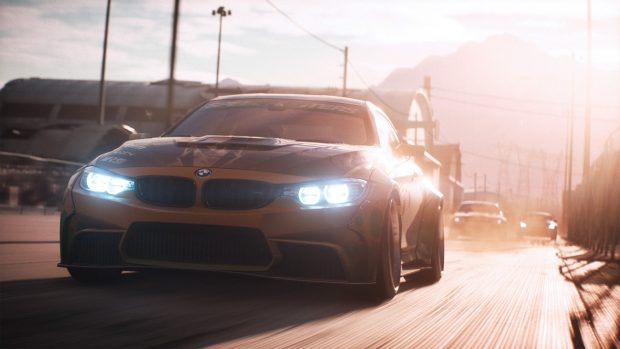 The word Ho keeps using is “cinematic”. It’s clear that’s the driving force here. The game is channelling The Fast and the Furious in both an idolising and accurate way. But why does he feel there’s a need for a racing game to be tailgating Hollywood? Isn’t having a blur-heavy game where cars go fast enough for the player?

“I think it’s because we’re not strictly a racing game,” he says. “When you hear ‘racing game’ you think: people who are gear heads, people who are motoring enthusiasts, F1 aficionados. And that’s not who we mainly appeal to now. Need For Speed has become such a huge franchise that we attract a lot of fans who don’t know how to tune cars, but they want to drive cars fast and they want to drive them in beautiful places and they want to experience that adrenaline rush but they don’t want it to be difficult. So we use our story and our characters in Need For Speed to provide motivations that are very relatable. So when you hear that Tyler is an aspiring street racer trying to work his way out of his poor neighbourhood, people kind of get that struggle.” 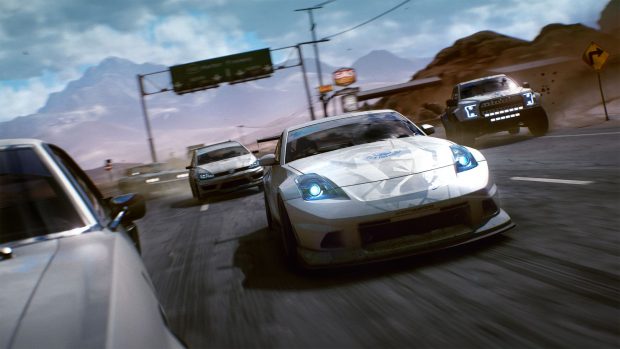 Those characters are on “a quest for vengeance against The House, a nefarious cartel that rules the city’s casinos, criminals and cops”. It just so happens the best way to do this is drive unnervingly high-powered machines down long stretches of exploding freeway. It’s as ludicrous as anything Vin Diesel gets up to in his Dodge Viper, or whatever. Most viewers of those movies accept that the Fasts and the Furiouses have long become knowingly daft, winking at the audience between each bonkers stunt, but Ho doesn’t necessarily believe the same of Payback. He sees it more like taking the middle path.

“We don’t attempt to be silly. We don’t attempt to be too serious either. We just want people that our players will relate to, you know, people who honestly have desires and honestly have their weaknesses [but] they’re out to watch each other’s backs… which is basically what we need videogame characters to be in general, to motivate and encourage and reward you for doing cool things in the game. There’s a very sincere ambition behind that, it’s not like ‘oh, we have to hit this tone to mimic that movie’. What we want is to guide our players to do well in our game.” 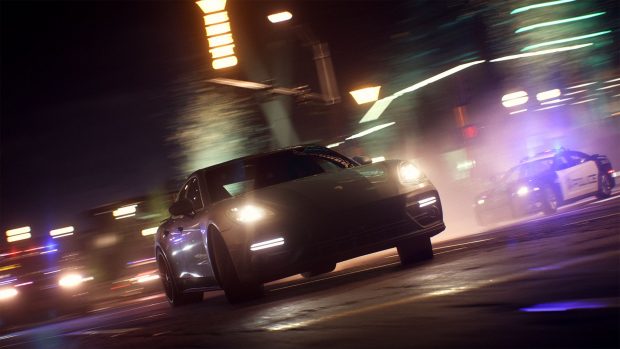 But judging from the small portion I’ve played, the blockbuster style missions seem laughably overblown, and will likely be interpreted as knowing stretches on action movie logic whether the developers mean it to be or not.

As for actually driving the car, it has a small camera problem. When you bash a foe and turn their car into a flaming write-off, the view switches away from your vehicle and focuses closely on the crash of your victim (the legacy of Burnout 3: Takedown continues). But the problem with that feature remains: in this moment, you feel blind, momentarily out of control, because you can’t see your own car. You can revel in spectacular crashes with all the sparks, smashing glass, crunching metal and slow-mo sound effects, but the part of your brain that’s focused on the race is confounded and panicked – where’s the road? Was that bollard ahead on the left or the right? Your thumb instinctively alternates between steering the car to one side, then the other, as if the race were still occurring at the original pace. Finally, when the camera returns to normal, you’re not where you thought you were. An enemy car is alongside you, fishtailing you into a wall, or a highway railing has come up faster than you’d expected. Going at this speed, those brief seconds or milliseconds of attention diverted from the task at hand are a significant loss. I don’t remember how Burnout solved this problem (if it ever did) but I also don’t recall the problem being as pronounced as it feels here.

But I also had a go at a straight-up race – a vanilla, storyless dash in a BMW M5 across the dusty plains of Fortune Valley, the game’s fictional setting. Without the distraction of voices and cinematics and baddies and scripted events, the road racing feels more competent. It’s still arcade racing. Drifting is a big part of it, but not overly stressed. And you can still bash and harass your opponents without veering wildly off the road too easily. Most importantly for an arcade racer, the physics didn’t feel too over-bearing. Maybe it was all the noise of the convention centre and the result of being over-stimulated for 48 straight hours, but I far preferred this more “easygoing” mode. And as someone who only dips into the racing genre from time to time, it does seem to hold to Ho’s idea of making their cars’ handling and controls simple to learn, but he insists there’s more to it once you get further down the road. 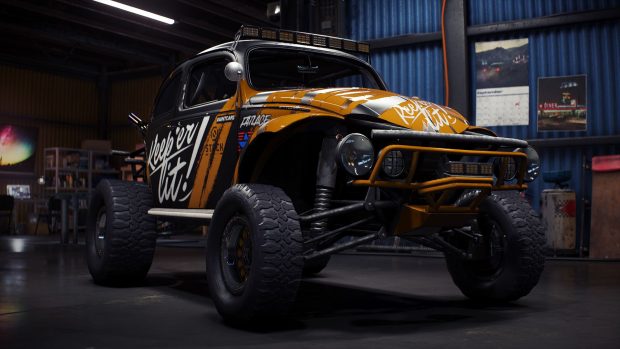 “We’ve taken our classic Need For Speed ‘pick up and play’ handling,” he says. “You’re succeeding, you’re going fast in a hot car, but we realised our fans have been asking for a lot more depth and breadth. So once you pick up a car and get the vibe of it, what do you do to upgrade it, to cater it towards one type of racing or another, one discipline or another? So, it starts out being very accessible but then through customisation, through upgrades, through having to build cars for different types of races and missions it becomes very very deep.”

That process of customisation, wrestling with the steal guts and chrome skin of your car, has always been a part of the genre’s appeal, says Ho. And as far as he’s concerned Payback has “the most car customisation of anyone in the business”. I wasn’t able to see any of that first-hand in the demo, and it feels like a big boast to me. But Ho insists.

“But we have a lot... People have such vivid memories of customising their cars in previous Need For Speeds that that is sacred to our games and our brand from here on out. All of our cars that we’ve chosen have the same or similar customisation [options], there are no ugly ducklings in the batch, plus we’ve made the performance customisation much more in your face this time… I think people are going to be thrilled with the sheer amount of variety, familiarity and new stuff we’ve included in the game.”

I’m no closer to understanding why the truck we were chasing had many more explosive barrels in its container than is normally prudent for a fast-moving transportation vehicle, but I do feel like I know more about Payback. In a lot of ways, it doesn’t seem to be trying anything very new. Previous games in the series, such as Need For Speed: The Run, focused on story but in a way that some reviewers said always felt throwaway or even “nonexistent”. And sometimes, during my truck chase, this felt like it was in danger of going too far the other direction, actively invading your racing game with cinematics and narrative that, while fun and good-looking, was nevertheless an interruption to the flow of the game.

A lot of folks might find that absolutely fine, if they are playing for action first and speedy racing second, treating this as a stop-gap between the Fasts and the Furii. But having been unable to see how the open world feels (the most appealing part of the previous game, Most Wanted) and without more time spent at the wheels of various cars, I can’t say for certain if Payback’s balls-to-the-wall action is laughable in the good way, or the bad way. I’ll wait to see where the barrels fall.