The creators of quiet arctic platformer Never Alone have announced their next game, The Endless Mission. It’s a sandbox that lets players “conjure” up games of their own within a larger world, using templates and assets from other built-in games, such as a 3D platformer or real-time strategy. You can then share your creations with other players, or dip into theirs via a central hub. I saw a short demo of all this at GDC as the developers tried their best to explain it in simple terms for my sleep-deprived mind. The game they kept using as an example was Garry’s Mod.

“Those who embark upon The Endless Mission are invited to mashup, mix, and modify games across a wide variety of beloved genres,” said developers E-Line Media in a more recent statement, “even manipulating the essence of the game down to the very code itself...”

The coding stuff isn’t designed to be prominent at first. This is a primarily a learning game, and players will be building things in a more direct way at the outset. I was shown an example of how it works. You collect blocks from each game or genre you visit. Not Minecraft-style blocks, but blocks imbued with the ideas of a particular game. Like stock cubes, but instead of chicken or vegetable they’re “fighting game” or “twin stick shooter”. You throw these distinct blocks into a vortex in the central hub and then jump into the soup to discover what kind of a mash-up it has created. For instance, throw in a cube for a 3D platformer featuring a fox hero, along with one for a racing game, and you might land in a template game world where the fox is expected to outpace the cars. At this point, you can use sliders and controls to alter more precise things. The height you can reach while jumping, the speed your fox can run, the attributes of the other cars, and so on. 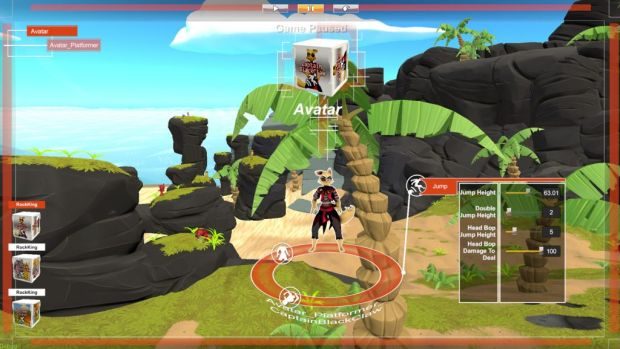 It’s an educational game, in other words, created in a partnership with Endless Interactive – an organisation that wants to “make computing universally accessible for everyone” (they make a low-spec operating system called Endless OS). But it’s designed, like all edutainment, to hide its learnin’ as much as possible. With that in mind, it will also have a story, penned by Red Dead Redemption writer Christian Cantamessa and Richard Elliott, who worked on the upcoming TV series Dark Crystal: Age of Resistance. It’s about a mysterious “Academy” that is the source of all this game-making technology.

It’s a very early design from what I saw, and I didn’t get any hands-on time with it to see how it would all hang together, but it reminded me of Tower Unite, if you were in charge of making the minigames yourself. Although it may not be as free-wheeling as that. The central hub will host a “Hall of Celebrations” where user-made games will be featured, but this will involve careful curation (“We want to keep it PG-13,” they say). 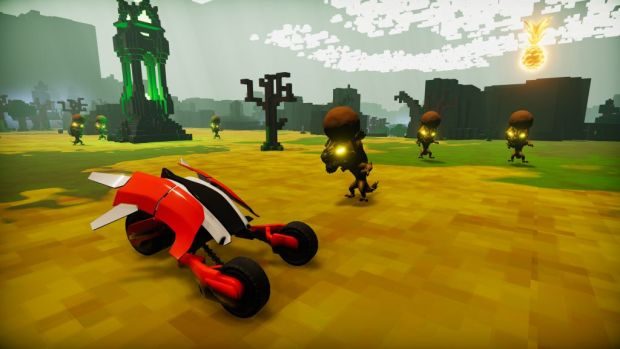 It’s heading to early access in summer this year. There’ll be three in-game genres to toy with at that stage: 3D platformer, RTS and racing game. But they’re aiming to let players come up with 1000 possible combinations of game template.So lots more stock cubes are planned.

E-Line's previous game, Never Alone, was a much more straightforward adventure, featuring an Iñupiat girl and her arctic fox companion – a piece of cultural edutainment that Adam liked.